Heidi MacDonald, Editor in Chief of The Comics Beat website, has been exposed as a part of the Whisper Network. The scheming and collusion within this secret group of women in the comics industry is being exposed drip by drip by Penny Parker right here on Bleeding Fool. Heidi appeared on Comic Book News with Dan Shahin Friday night for a CBN Q&A Panel discussion where she was asked by one of the viewers what she thought of the series of articles on the “Whisper Network” which revealed she was a member of a secret Facebook group called Women in Comic Books that seem to be the hub for a lot of unsettling conversations about male comic pros. Heidi admitted she was in the group, but then tried to play it off as completely harmless.

This video by Youtuber Ninja Knight analyzes MacDonald’s odd response and her potential relief at not being pressed further on her involvement and what looks like cover she has run for the Whisper Network, a failure of the interviewer and potentially another example of biased journalism. Credit to Shahin for at least bringing up the question from one of his viewers.

Too bad she wasn’t asked why she ignored the pleas of a living legend in the comics business accusing his former employee (Stephanie Cooke) of felony theft and making very public statements about it that were published in the media. Multiple sources backed up his claims and a criminal case was started. For some reason, Comics Beat, and all other comic book websites either ignored the story or memory-holed it later.

Comics Beat, the workplace of Cooke’s fellow Whisper Network comrade Heidi MacDonald, did publish an interview with Cooke a little over 2 years after Willingham filed the police report that opened the criminal embezzlement case against Cooke (which remains active). However, there was no mention of the criminal charges in the interview and Cooke wasn’t asked why she left the states to return to Canada after Willingham filed the charges. Cooke did offer this comment.

“There are a lot of problems with the comic book industry as anyone who’s been in it for a while can tell you. I think some of those problems could be solved with transparency.”
Stephanie Cooke, June 28, 2018

It appeared that McDonald was willing discuss transparency as it applies to the men in the comics industry, but not her friends in the Whisper Network. Again, there was no mention of the embezzlement charges Mr. Willingham lobbied against Cooke in the article. For that matter, there’s no mention of it anywhere on the Comics Beat website – save one lone commentor with a very good memory and an inquisitive mind who at asked about the case down below in the comments section of that “transparency” interview. 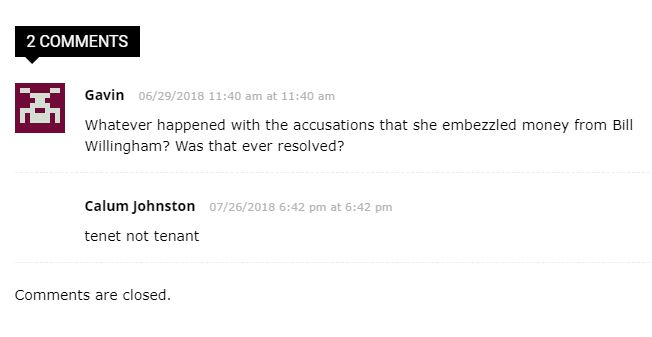 Comments are still closed.
Seems like a double-standard when less than a year before, Heidi published news that ComicsPRO (Comics Professional Retail Organization) was investigating misappropriation of funds by Co-Founder Gary Dills. Embezzlement stories by men were apparently fair game. Other comics websites also carried the same Dills criminal story, but when she went looking for the Stephanie Cooke story, Penny found nothing at ComicsBeat.com, or anywhere else.

Isn’t it time to ask Heidi about this double standard instead of jokingly dismissing what’s really going on? The CBN livestream panel quickly moved past the question without ever actually discussing the issues that have been brought up in the articles. It’s obvious that Dan Shahin knows about the series of Whisper Network articles, because he was in control of which viewer questions are addressed and he even corrected the viewer in the chat who mistakenly thought Bleeding Cool (who memory holed their coverage of the event), was the publisher of the Whisper Network articles.
So Shahin knows about the articles and has very likely read them thoroughly.
Here are some questions that Dan Shahin should have asked of Heidi:
– When did you first hear about the embezzlement charges that Bill Willingham filed against Stephanie Cooke? If it was before your 2018 interview with Stephanie, why didn’t you ask about it?
– Do you believe Bill? Why or why not?
– Why have you never published anything about the incident on Comics Beat, particularly in light of Willingham making new statements about it last week?
– Do you approve of some of the potential harassment tactics committed by fellow members of the Whisper Network that are being revealed in Bleeding Fool’s series of articles?
Let’s hope that next time Dan, or anyone who happens to host Heidi MacDonald on a livestream, they’ll ask those questions. It’s time Ms. Cooke answered for her part and it’s also time those the comics media writ large answer why they’ve been covering for her.