Comic book fans know that Marvel Editor in Chief C.B. Cebulski has a slew of problems to deal with as he gets settled in his new job. Some issues are more complex than others. He will need to wisely pick and choose his battles.

One issue, however, that can be dealt with over night is the behavior of writers like Max “I f***ing you hate personally” Bemis.

Every normal company has a social media policy. Every normal company would fire an employ who told paying customers “I f***ing hate you.” Therefore, it makes absolutely no sense why Disney and Marvel turn a blind eye to the behavior of Mr. Bemis of Moon Knight.

Check out my new YouTube video for a rundown of the latest unprofessional turn by a Marvel writer. Feel free to contact Mr. Cebulski and Disney with screenshots of Mr. Bemis’ Twitter feed. Some of us would love to hear them explain how, exactly, this promotes the industry. 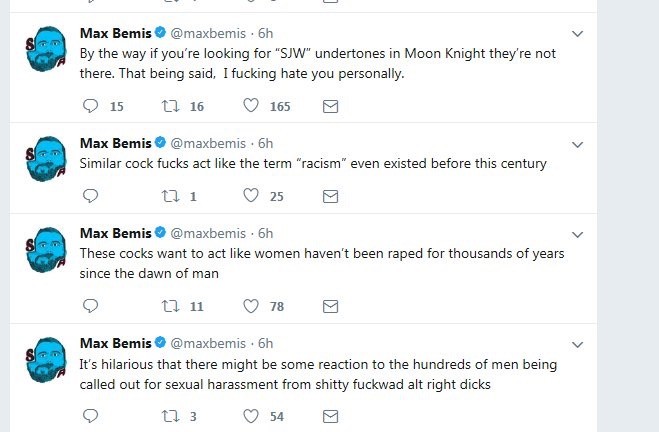 UPDATE: (Jan. 8, 2018) Max hasn’t altered his approach to fans following these reports. Not even a little bit.