So what is happening on the scene when a devoted and spirited Star Trek fan gets herself a channel and helps pump numbers and hits for CBS ? Well, strange as it may sound to those of you out there who might not have heard, some famous Star Trek actors children have actually gotten their feefees all hurt. Astonishingly it ends with a trash mob lined up to attack a Youtube commentator named ‘MechaRandom42.’ She is known for her commentary on the gaming community but frequently espouses her thoughts on geek film and tv properties such as Doctor Who and Star Trek.

Her recent rants about Star Trek caught the ire of some angry fans, and they felt compelled to send their nastiness to her. Just look at some of these posts : 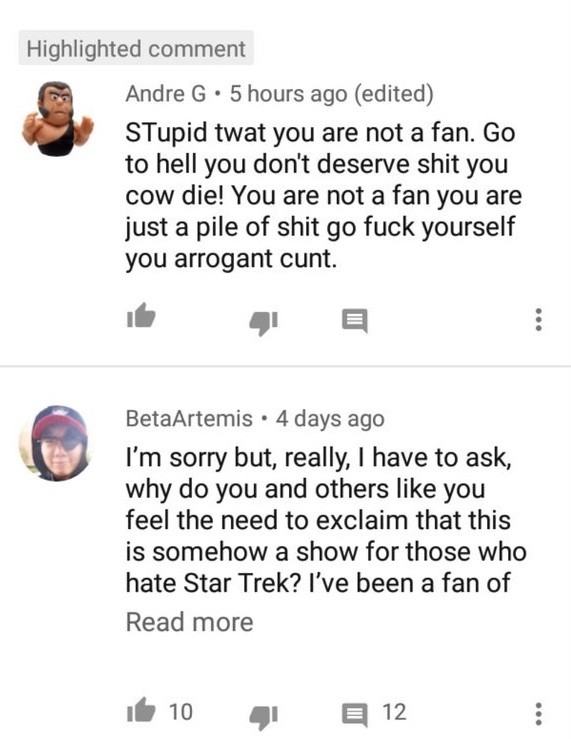 What a sad day when someone who so honestly and openly portrays her love of the Star Trek universe and legacy can be bashed and harassed like this on multiple social platforms for simply voicing her opinion. What a display of completely shameless and antisocial behavior against a truly invested and passionate fan.

But it got even worse. Chris Hunter is the son of Jeffrey Hunter, who played Captain Pike in the original Star Trek pilot episode, “The Cage”. When this pilot was rejected, Hunter withdrew from the series, and Pike was replaced with Captain James T. Kirk. Well, his son not only did not withdraw from seeing a random woman on the internet criticizing CBS All Access’ Star Trek Discovery, he attacked her and publicly pleaded for his followers to harass Mecha on her Youtube page!

He’s got some auto-correct issues going on here, but I’m sure you can see the spirit of what he’s getting at. 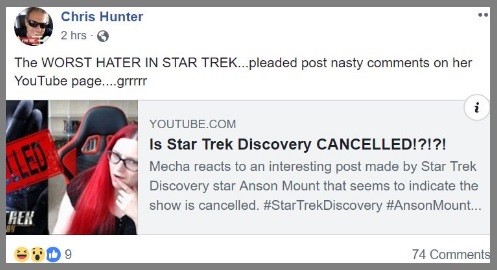 The cherry on the top of this shit cake is when a dude currently working for Lucasfilm on the Star Wars franchise actually retweets the ensuing mob’s call-to-arms against this woman. Yep, none other than an esteemed member of the Lucasfilm Story Group, Pablo Hidalgo, joined the attack mob and appears to have even signal-boosted Chris Hunter’s request to his followers as well. 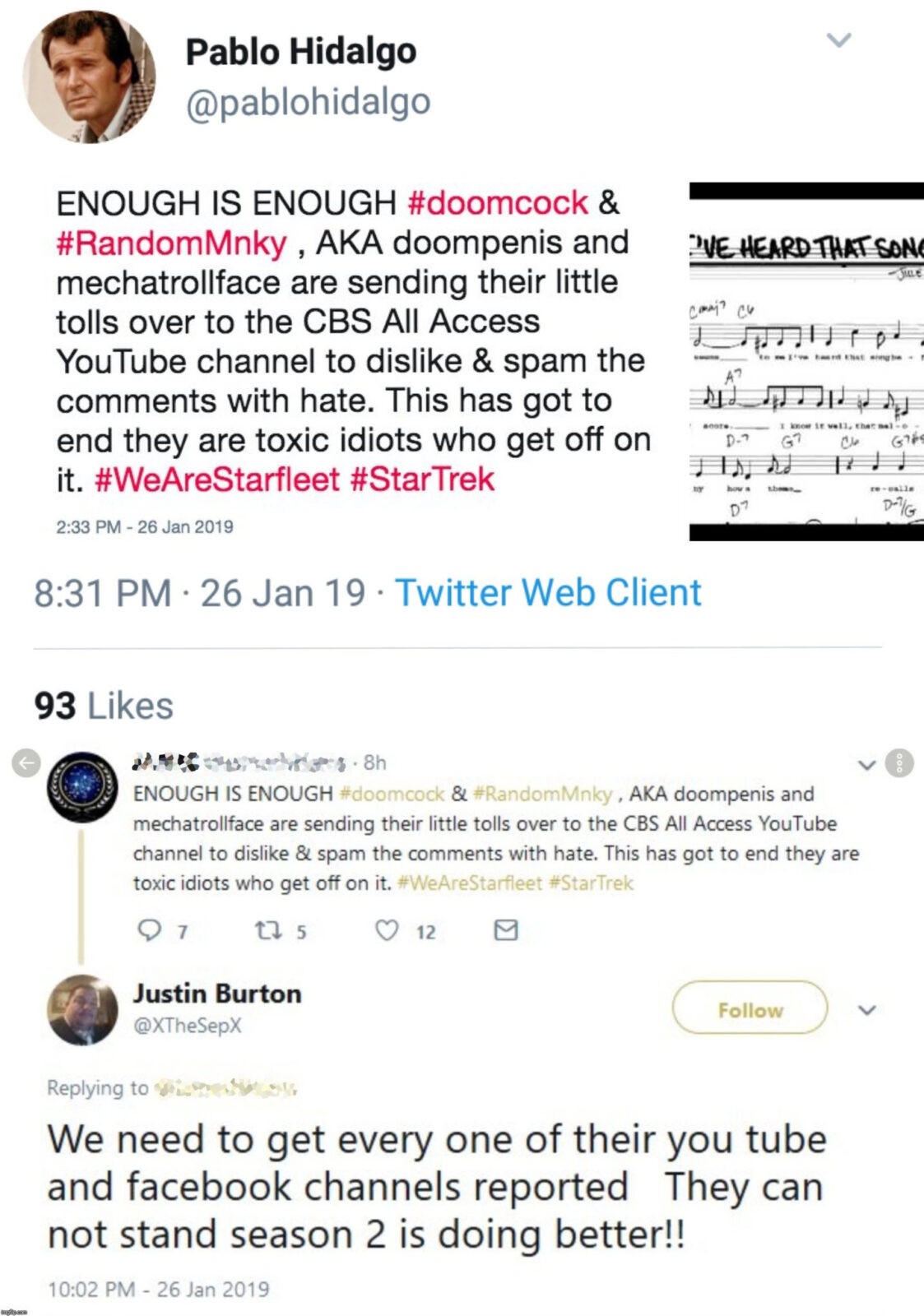 It’s a creepy insiders group of fan haters and anti-indies it seems. This next choice bit is from one of Pablo’s buds and is older admittedly, but it serves the point here nicely too. Look at the amount of ‘fuckin ‘retweets’ on this hate? The insane amount of ‘likes’? Holy shit.

I understand that Most people who post on these platforms — not all, but most — are people whose opinions do not matter one bit. They’re people with “followers” who never actually would follow them anywhere, and these are assholes with “likes” from people who do not actually like them. Their cheap shots mean absolutely nothing, but my God – who are these people and how did they get a stranglehold on our modern mythologies ?

If anyone is being attacked so viciously and so openly it doesn’t much matter about gender I hope you all know – nice fucking try – but irrelevant here my dearies of the outrage mob.

Here’s the facts. MechaRandom42 had the audacity, no, the absolute gall to ask a question that deserved to be asked. 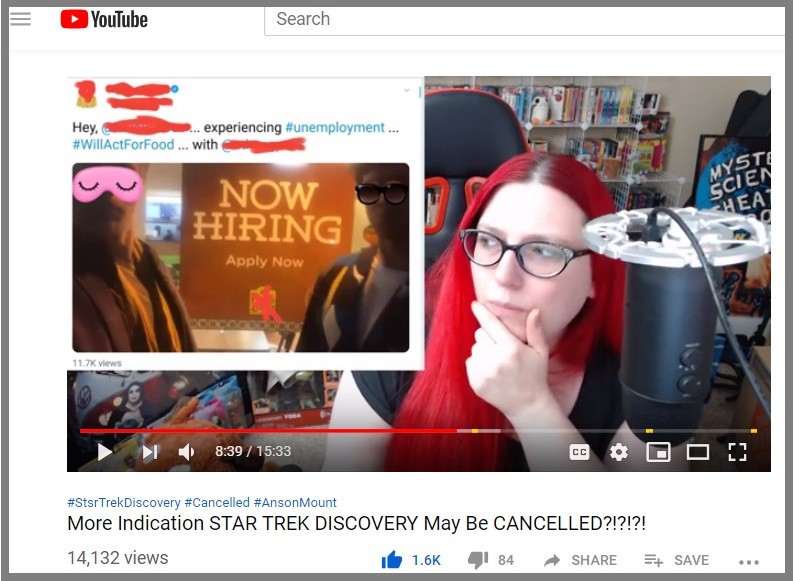 “Are we going to continue with certain actors in this series ?”

” Or is this a subtle hint that all is lost and there’s no hope for the show to continue at all?”

The trouble started after she posted this video :

These seem like interesting and important questions to those folks who are passionate fans of the Star Trek franchise.

But look here guys… these interesting questions she’s raising aren’t important to this fool. No, he is actually threatening to “knock her teeth out”… and laughing about it. Guess it’s a good thing Chris Hunter’s not a smirking Catholic boy from Kentucky, or his fellow NPC/SJWs would be on him like a bunch of Russian bots! 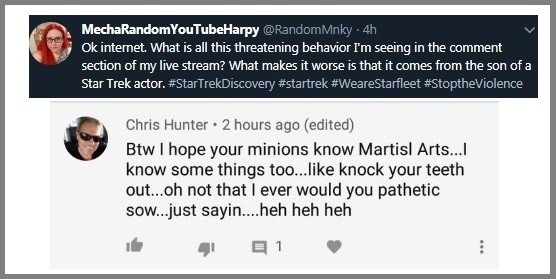 As a result, hundreds of his fellow virtuous warriors of cultural authority, ganged up on this woman and had her Youtube channel flagged for the usual ‘miscellaneously offended blah-blah-blahs…

And as of this publishing, so far YouTube is refusing to answer her pleas for help.

And Mecha isn’t alone in this issue. Fishy business has been going on for some time with e-people and Patreon, YouTube, Twitter, et al…you guys all see it. 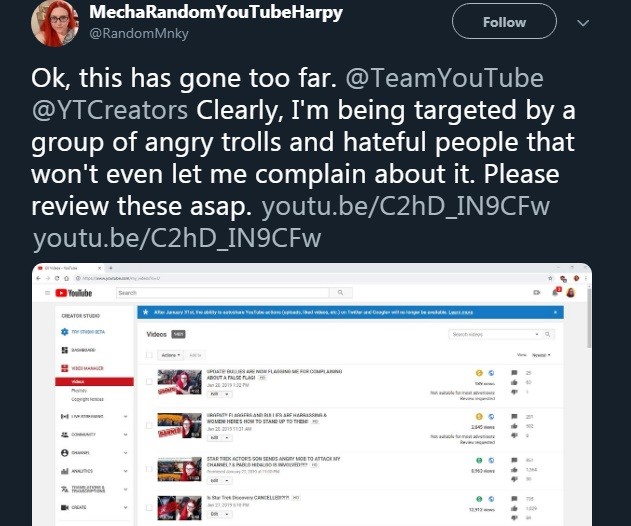 How is any of this helpful to a struggling franchise like Star Trek?

I mean lets be honest here…we’re not in some kind of “Glory Years” for Star Trek fandom or content.

Anyone who actually believes that this is a healthy franchise with a solid fan base is deluding themselves.

Have you seen the fucking Klingons on this shitshow?

This is entertainment by committee right here. 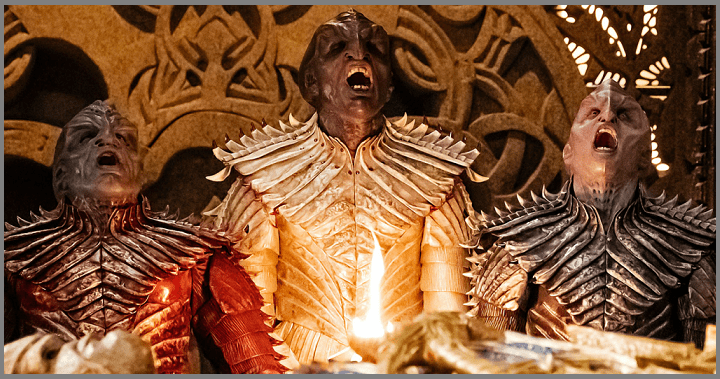 When you combine the current shameful conduct of these so called “Star Trek Fans” coordinating against Mecha with the terrible reactions and divisiveness that the new direction of Star Trek Discovery is having on  fandom in general, it seems quite apparent that genuine Star Trek fans are beginning to search for the same thing that comic book fans want to know…

And if you’re a regular visitor to this website, then you know that those comic book fans are upset for similar reasons that Star Wars fans are divided and pissed off too.

Dr. Who fans have burst the dam of tolerance on their favorite content here recently and there are nothing but signs of instability and deep deep divisions towards the direction and loyalty to great studios like Marvel and DC in the realm of movies.

Gamers of course were already told to go fuck themselves a while ago now, but you see; with the new mobile push – they’re all asking the same things again and again it seems, just like the rest of the gang I’ve just mentioned.

**Please don’t misunderstand those similarities as some kind of pattern…why would that be?**:

They are all demanding answers to the same things :

What the fuck is going on?

Who are these idiots and do they want our money or not?

What I don’t understand is the hive of activity that has sprung up around Mecha and this particular issue of a mediocre show with an uncertain foundation and following. How is it wrong for those who follow Star Trek closely to ask what is happening with their favorite franchises, or why everything seems to be so chaotic?

It almost seems like cancelling all these shows, selling fewer and fewer comics, turning away even more fans and supporters – is the whole point of it. Simply grinding it all to some sort of halt. Is this their goal?

Is targeting Mecha and others like her just a means to that end?  I ask any reasonable person to watch any of her Spock related broadcasts and tell me you don’t believe she has her whole heart in the fandom of Star Trek.

Mecha has constantly encouraged her fans to check out CBS content and helped to promote the brand. And even though her opinions may have sometimes included harsh and justifiably brutal criticisms, she knows her Trek.

MechaRandom42 has people talking about Star Trek again and CBS should have perhaps engaged with that instead of turning a huge tide of the fandom aside like vermin. What a terrible pity.

How disgraced Gene would feel for such a sentiment to be directed so hurtfully in the name of something he loved so deeply? I think he would be hurt that someone as passionate as Mecha would be targeted in this way.

Those responsible should be completely ashamed of themselves.

Mecha wouldn’t even bother talking about these things if it didn’t matter, yet somehow, here we are in the midst of an enormous effort to try to silence and shame her.

What is it, because she holds the wrong politics? Maybe she follows the wrong people on Twitter? She won’t tow the party line? Did she wear a red hat perhaps? Wait ! That’s it, her hair is a “hidden symbol” for a MAGA hat !!!  I saw her smirk snidely yesterday for 8 whole seconds too!

She must be a leader in the new KKK!!! Thank you NPC authoritarians!!! Tell us, who the “wrong associates” are today great overlords – so that we may destroy them to please thee ! 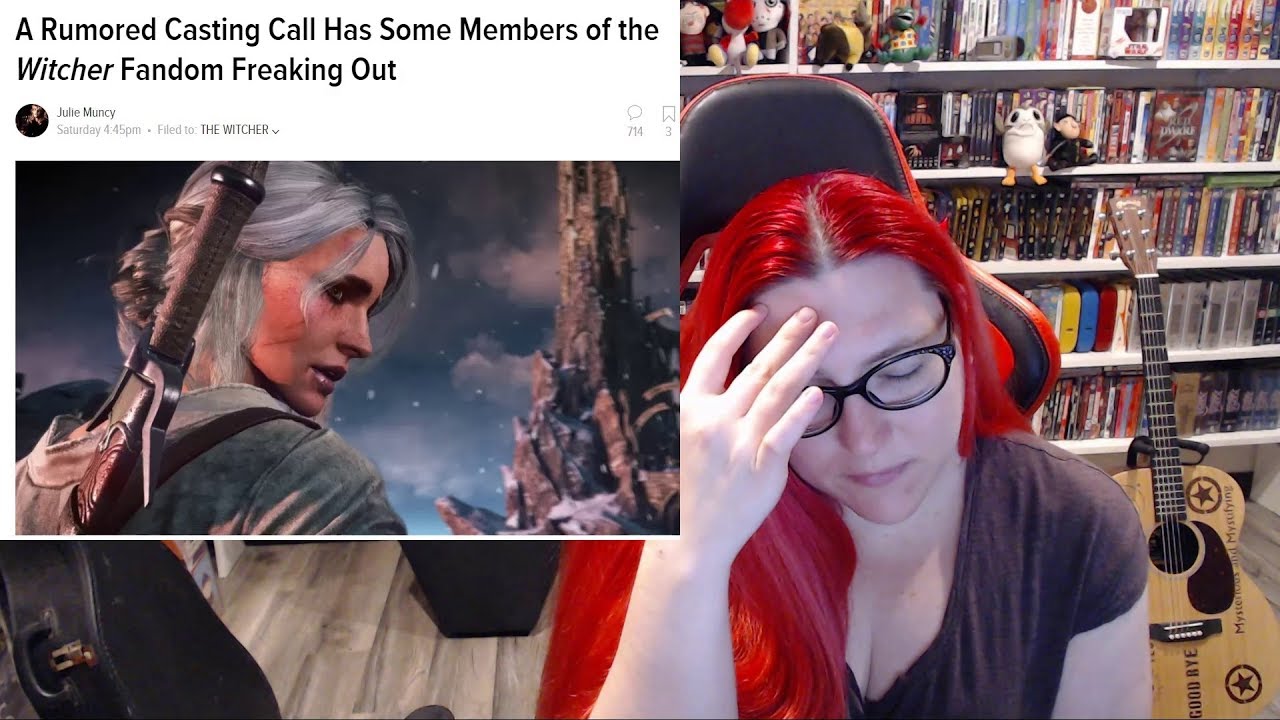 The virtuous execs at CBS don’t seem to be running to anyone’s defense…certainly not to one of their most ardent and honest fans.

So please don’t play to their hurtful games.  Don’t bother harassing or even answering these twats and crowbag shills that spew hate and want nothing but drama hurled at good folks like Mecha. Leave all that behind. Fuck them.

Go check out Mechas’ channel and show support for her work instead.

She loves what she does and she knows her stuff.

So please put a like on her content that you find interesting and sub the works if you dig it.