In celebration of Lucasfilm’s 50th anniversary, beloved characters (including a certain green space rabbit) from the Star Wars books and comics will join the vaunted action figure line of the Black Series.

Pulled from Legends tales and current storytelling, the heroes and villains chosen for plastic immortality form a true all-star wave: Luke Skywalker (Star Wars: Heir to the Empire), Jaxxon (1970s Marvel Star Wars and IDW Publishing’s Star Wars Adventures), Darth Maul (Star Wars: Darth Maul), and Kir Kanos* (Star Wars: Crimson Empire). “With so many stories and fan-favorite characters to choose from, it’s a challenge to narrow down to just a few,” says Chris Gollaher, director of product design at Lucasfilm. “We selected these four based on fan appeal, and because they show the tremendous range and potential of our publishing program by representing comics and novels alike.” 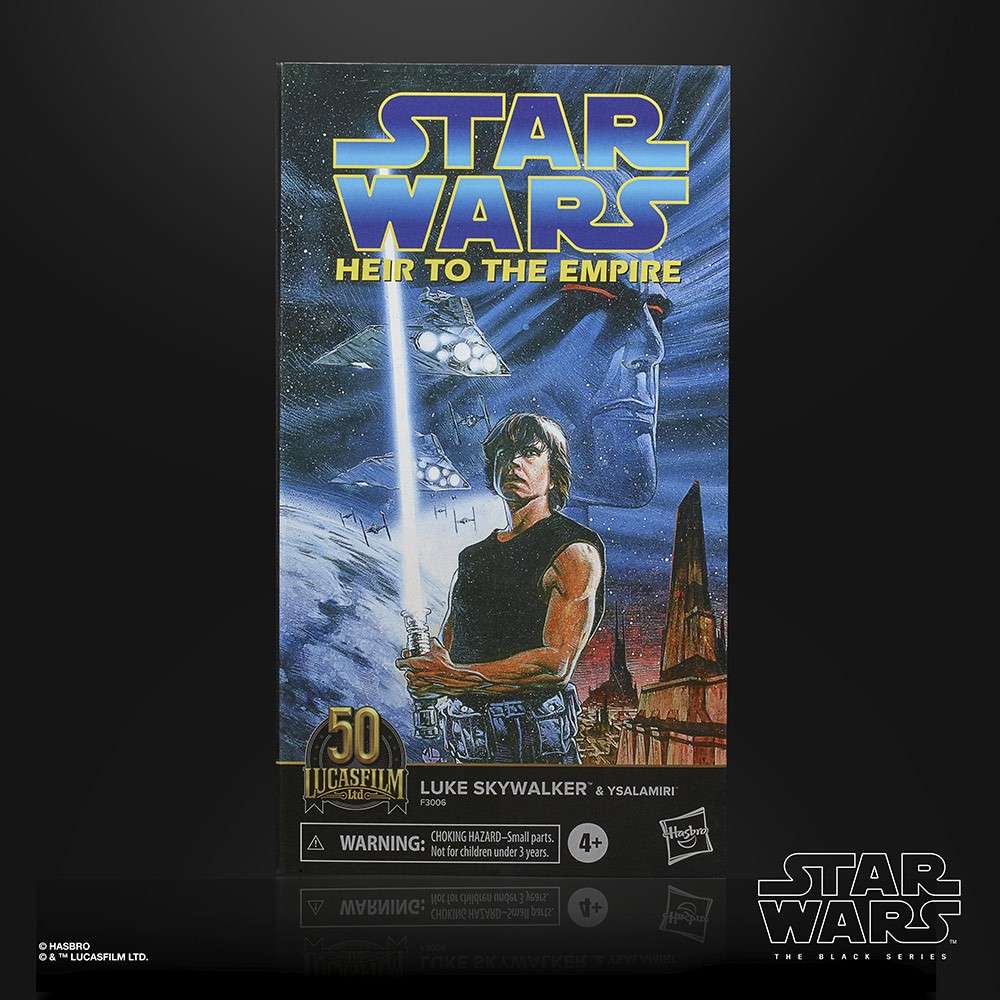 Inspired by the comic book adaptation (written by Mike Baron and illustrated by Olivier Vatine) of Timothy Zahn’s seminal novel, this Luke Skywalker figure depicts the Jedi five years after the events of Star Wars: Return of the Jedi. “This is an opportunity to have a Black Series Luke action figure in a time period that he hasn’t appeared in as an action figure before, so that’s a real landmark for me both as a member of Lucasfilm Publishing and as a Star Wars fan,” says Heddle. “This is the Luke we met in our mind’s eye in 1991, and seeing it brings me right back to that exciting time. He’s an emblem of the decades-long Star Wars publishing legacy.” 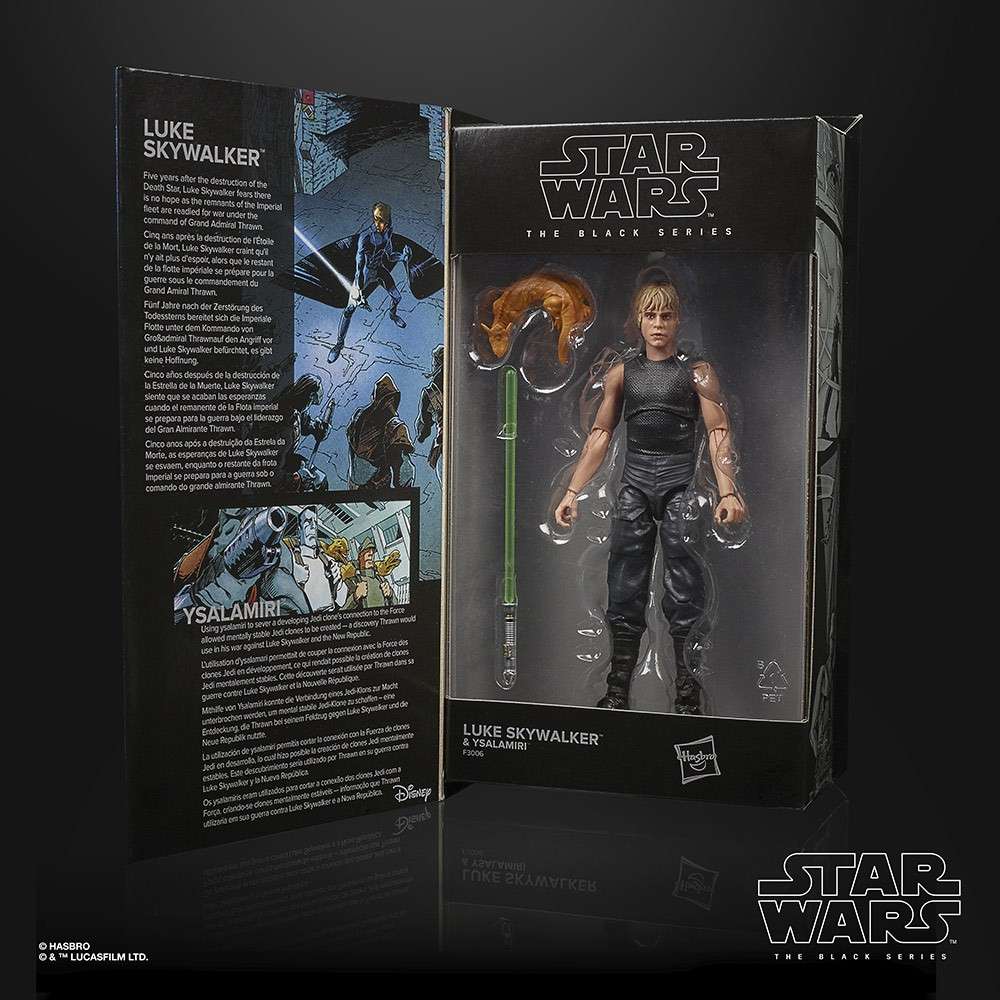 In addition to his lightsaber, Luke comes packed with a ysalamiri — a favorite pet of Grand Admiral Thrawn for its Force-blocking abilities. “Since the ysalamiri play such a crucial part in the trilogy, it was important to us to get that creature into the line,” says Eric Franer, associate product designer, action brands, at Hasbro.” We even sculpted the ysalamiri to fit around the neck of our recently released Black Series Archive Grand Admiral Thrawn, so collectors can pose that figure out with the ysalamiri to recreate those iconic moments from the novels and comics.” 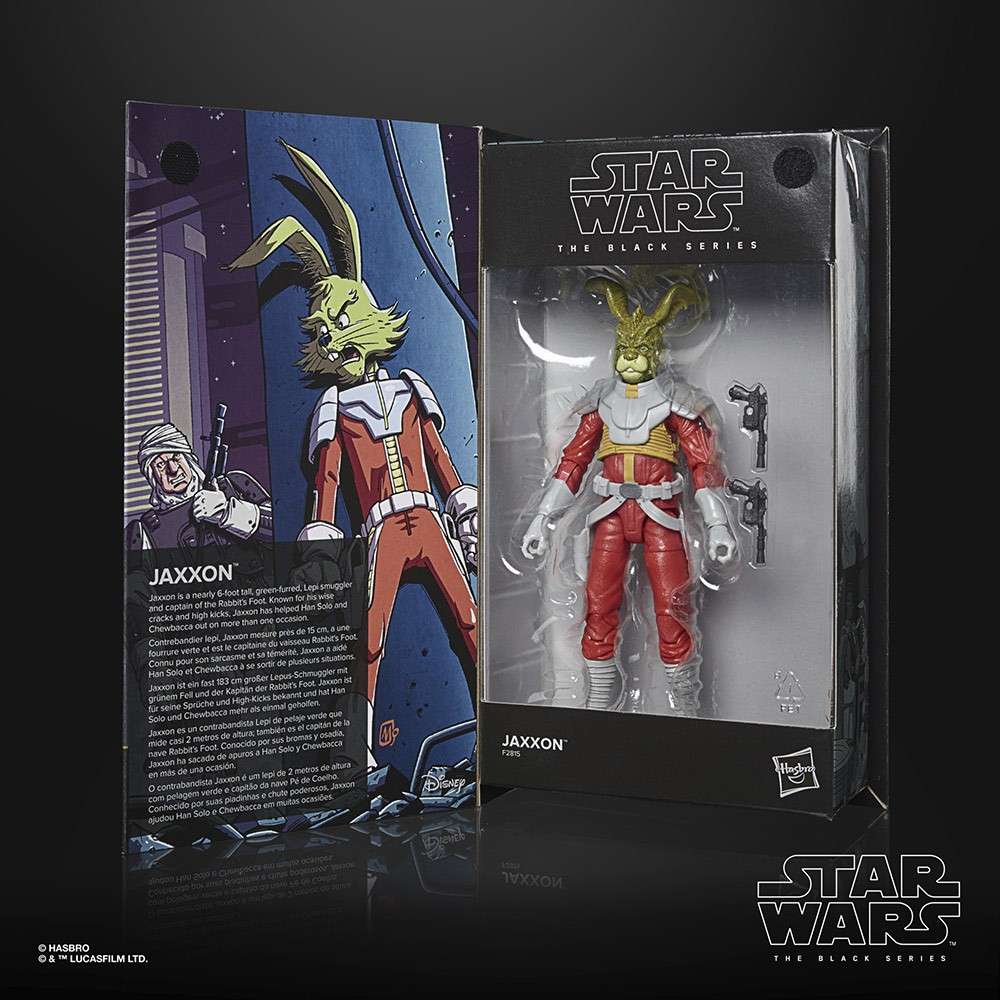 Created by Roy Thomas and Howard Chaykin for Marvel’s 1970s Star Wars comics, the rabbit-like Jaxxon was recently fully adopted into modern continuity thanks to an appearance in a Star Wars Adventures tale by Cavan Scott. A cult favorite for decades, the release of this figure is sure to send fans hopping (pun definitely intended) down the toy aisles. “Jaxxon is a legacy character from the very beginning of Star Wars publishing — his first appearance was in the original Marvel comics series, issue #8 in 1977,” says Heddle. “A wise-cracking, tough-as-nails, giant green rabbit — what’s not to love? For many fans, Jaxxon is the ultimate symbol of that original Marvel run. It was a delight to be able to bring Jaxxon into more recent canon material, but this figure commemorates the character from his very beginnings, as it should. I can’t wait to have Jaxxon on my bookshelf.” 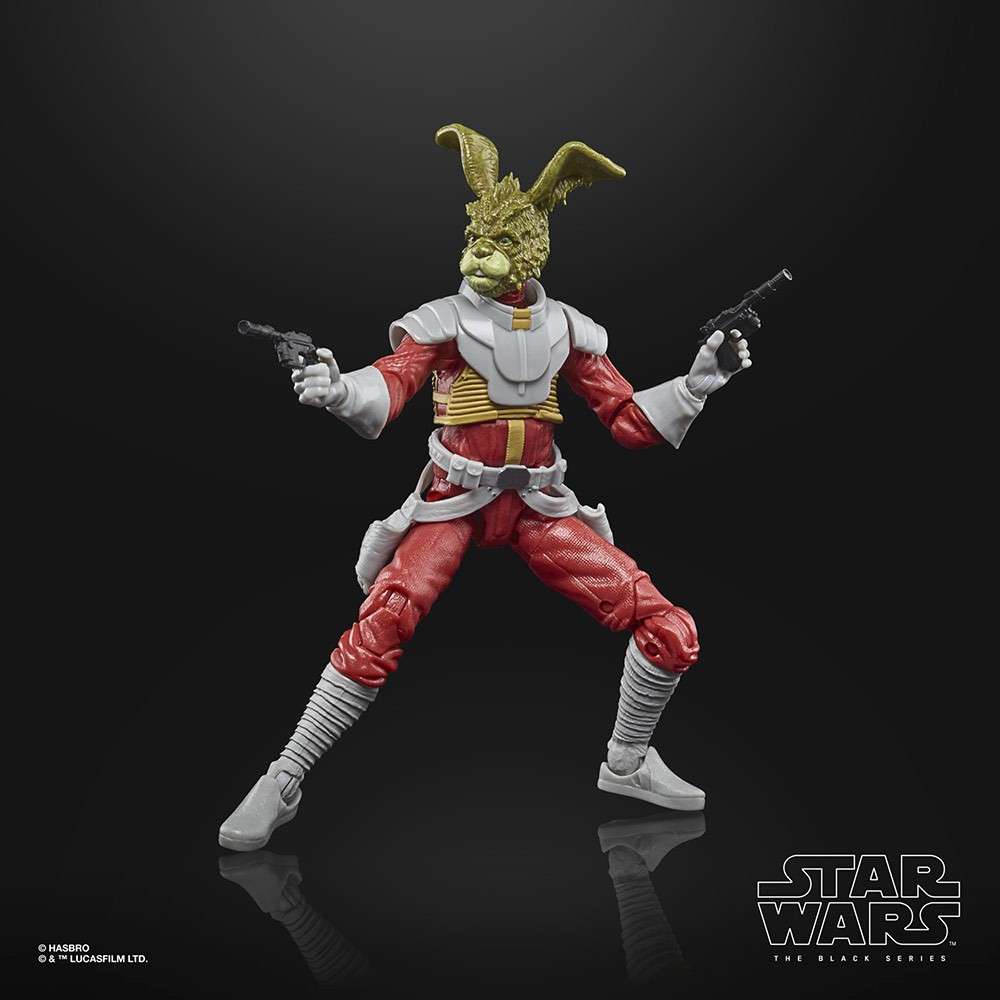 “Jaxxon is one of the most unique and fun figures we have ever done and the publishing program was the perfect place to introduce this character,” adds Franer. “We really wanted to capture his unique silhouette so we tooled up a new head, shoulder pads, and belt to make him look truly unique from any other Black Series figure we have done up until this point. Making a realistic interpretation of the character’s portrait was also a fun challenge, especially since he has been seen in so many different styles throughout the years.” 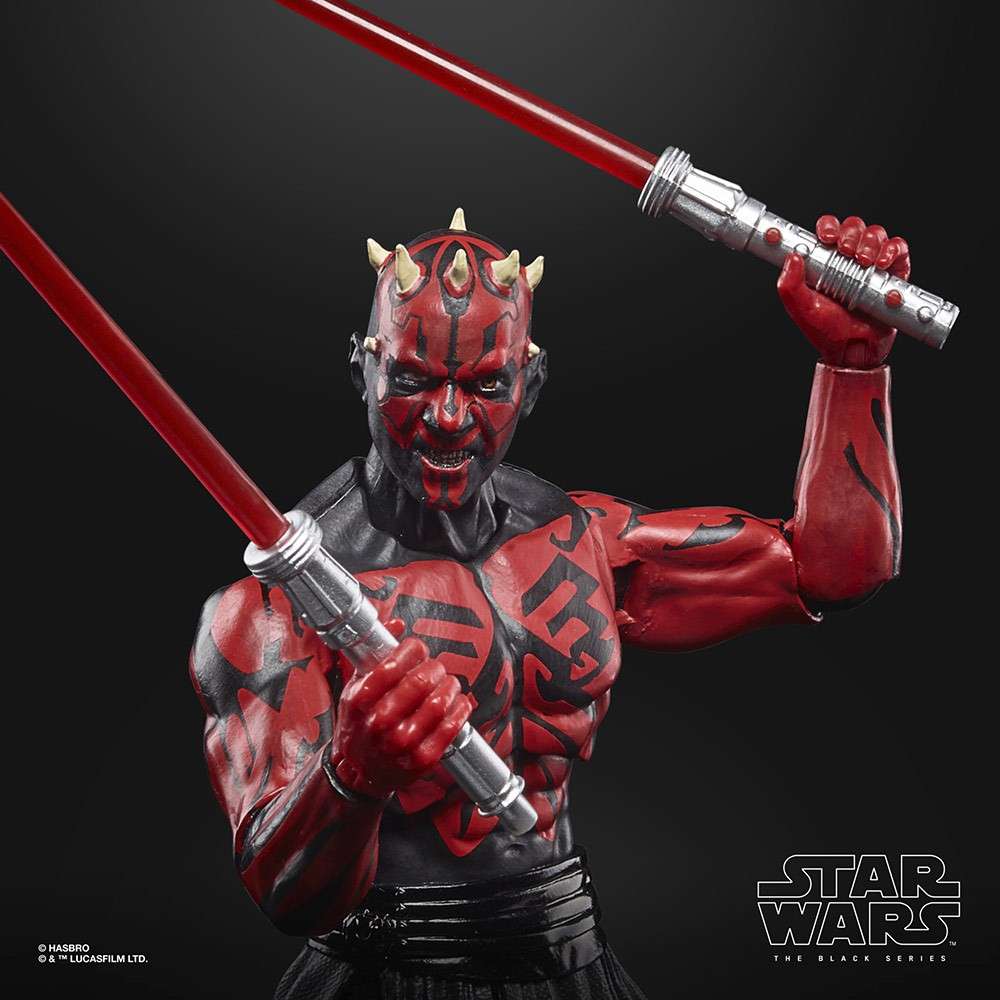 This version of Darth Maul comes from a 2000 comic series set pre-Star Wars: The Phantom Menace. Written by Ron Marz and pencilled by Jan Duursema, Star Wars: Darth Maul offers a glimpse into Maul’s Sith training and sees him dispatched to handle a new threat to his master. “It feels like an absolute gift any time we can feature Darth Maul in publishing, and having an action figure of Maul in a costume he has worn only in the comic books is really fun,” says Heddle. “At this point in the timeline, he’s full of rage and drive, and poetic in his athleticism. I love the dynamism of this figure.” 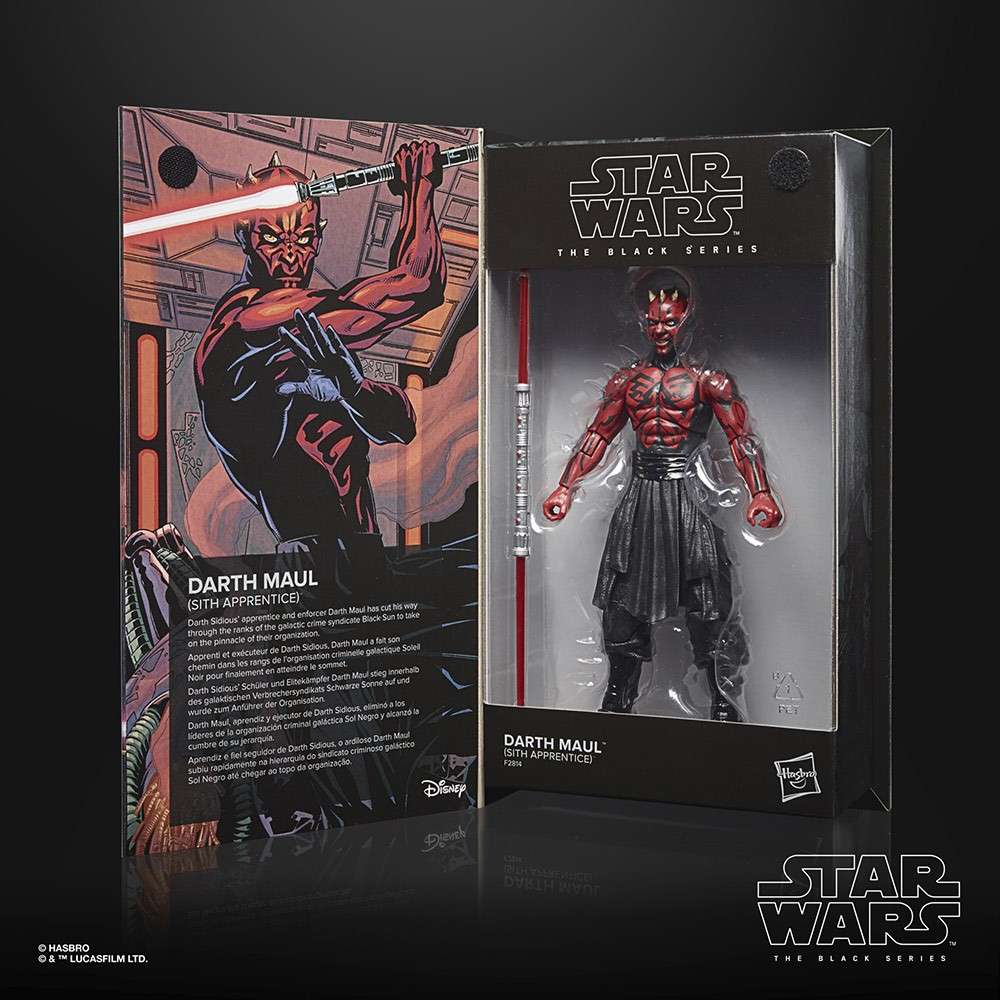 “This is our first time doing the shirtless Darth Maul and showing off the full body tattoo; it is a striking update to an already awesome looking figure!” says Farner. “We used this opportunity to sculpt up a new head as well, focusing on the bared teeth snarl he has in many of his appearances.” 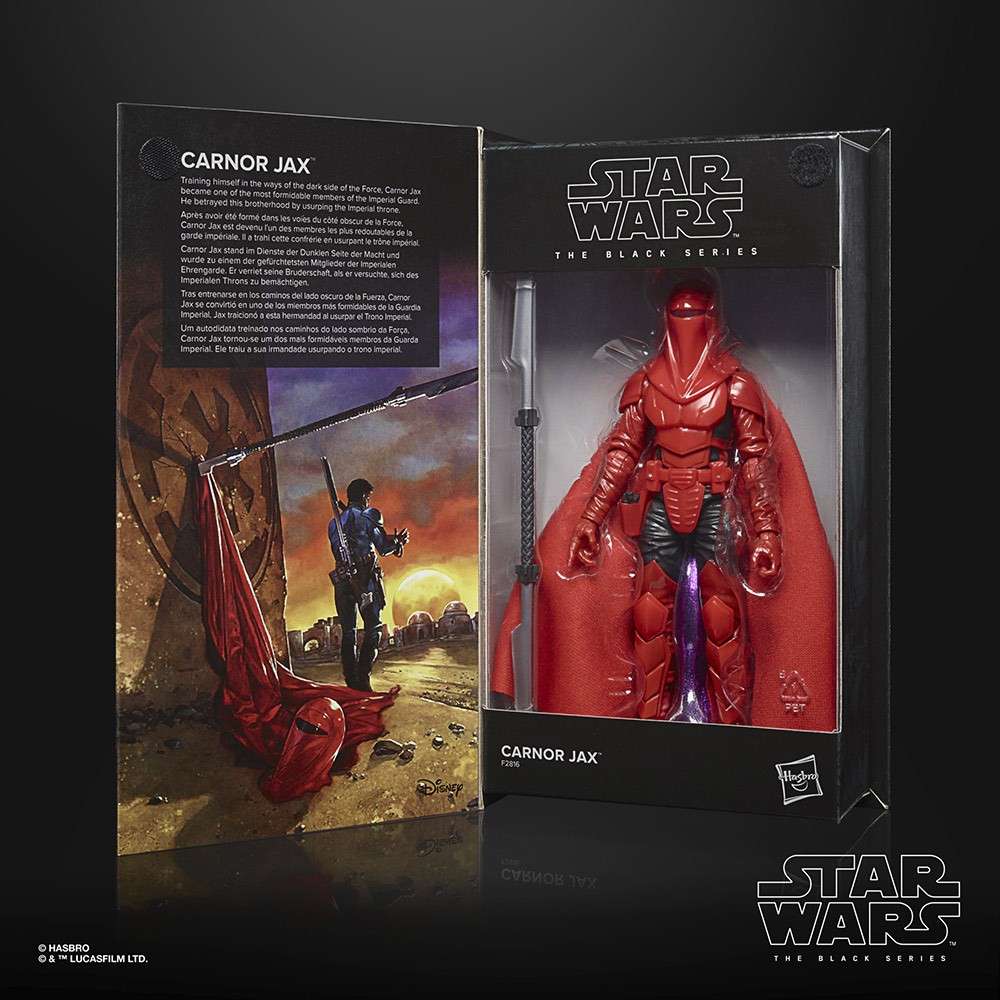 A loyal servant of the Emperor as a member of the Royal Guard, Kir Kanos was first introduced in 1997’s Star Wars: Crimson Empire comic miniseries, written by Mike Richardson and Randy Stradley with art by Paul Gulacy. With an intimidating look based on the classic Imperial guard from Return of the Jedi, Kanos’s outfit features salient details, including a purple cape lining. “I wasn’t familiar with the Crimson Empire comic book series until I started working at Lucasfilm, and if memory serves I did shepherd it through the end of its run,” Heddle says. “I was a big fan of the series…One of the coolest aspects of the Crimson Empire series was seeing the red-robed Imperial guards in action, not just standing still as we see them in Return of the Jedi, but rather engaging in furious hand to hand combat. It wasn’t like anything Star Wars fans had seen before. So I love seeing this important piece of Star Wars publishing history come to life in this wonderfully-detailed action figure.” 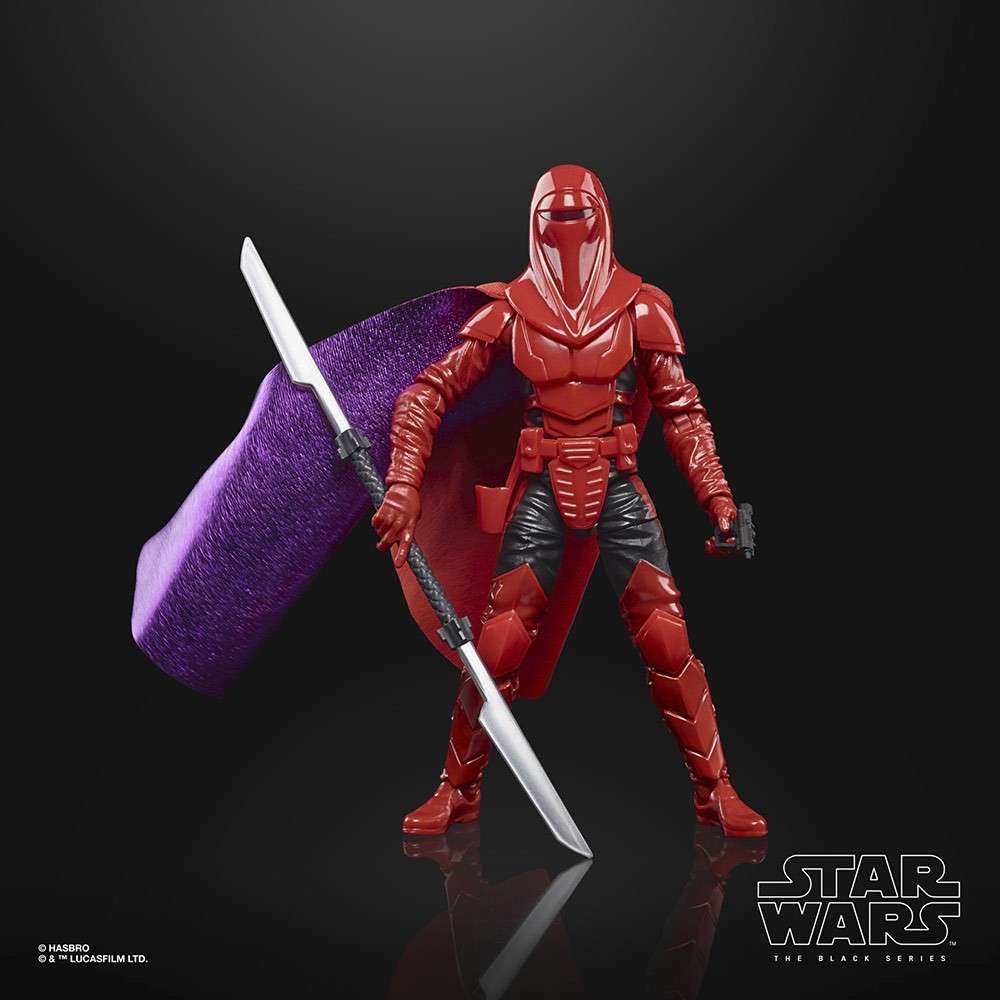 “This Black Series [Kir Kanos] figure is actually an update to our previously released Black Series Imperial Royal Guard figure,” says Franer. “In the films we never see the Imperial guards without their cloak, so we based the figure’s undersuit on [Kir Kanos’s] outfit. Now, it’s worked out great to make this update and create this [Kir Kanos] Black Series figure. He comes with brand new soft goods which feature a striking purple on the interior of the cloak and his iconic double ended vibroblade. We also wanted to pay homage to the cover art for this collection, so we tried to recreate that look as closely as possible for this figure.”

While this wave is definitely a surprise, it was actually something of a no-brainer. “At its core, Star Wars is all about amazing storytelling, and throughout the history of the company, some of the most imaginative and exciting stories have come from our publishing program,” says Gollaher. “We couldn’t celebrate the first 50 years of the company without acknowledging some of the great characters and stories that have come from our novels and comic series throughout the years.”

So make some room on your book or toy shelves — these figures will fit well on either.

Don’t Forget Your MGear: The Most Innovative Metal Wallet for Geeks