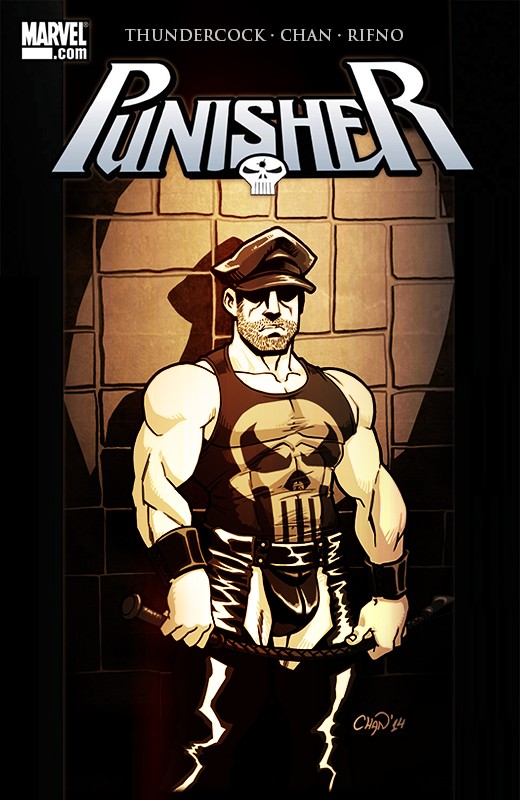 Set within its own alternate universe, the series places Punisher in 1970s San Francisco, during the height of the gay bathhouse scene. Like the original Punisher, this Frank Castle is a Vietnam-vet who declares a one-man war on crime when his Filipino lady-boy lover, Jesús, is murdered by Queenpin—an evil drag queen who rules over the infamous Gay Mafia.

According to Thundercock, “The idea of a leather daddy version of the Punisher first began as a persona I use in my fetish exhibitions and private sessions. To me, the story’s really about the rivalry between the two extremes of the gay club experience… leather daddies are like the ultra-masculine side, all masculine and big-dick macho, and the queens…you know, like the drag scene, they’re all about being super fem.” But don’t assume this Punisher series is going to be all night clubs and men in dresses! “Frank is fighting a real war,” Thundercock says, “Remember, some very bad boys killed his Jesus and now he’s out for revenge. The difference is, the only big gun my Punisher needs is the magnum caliber long barrel that’s swinging between his legs. And trust me, he knows how to punish the guilty.”

In conjunction with the book’s release, Marvel has contracted a cross-promotional distribution deal with the Tom of Finland Catalog. “It is with great enthusiasm that Marvel hopes to open the world of the MCU to a whole new audience of diverse readers,” said one Marvel representative.

PUNISHER: Hell Bent for Leather is due to his store shelves sometime next year.

J.Ishiro is a writer of prose and comics. He's written several books under the name “Josh Finney,” including Casefile: Arkham, Titanium Rain, Utopiates, and World War Kaiju. You can find more of his works at jishirofinney.com

Lesson from the Multiverse: Political Comic vs Political Parody

Perspective: Star Trek: TNG’s ‘Worf’ Was a Failure at Everything