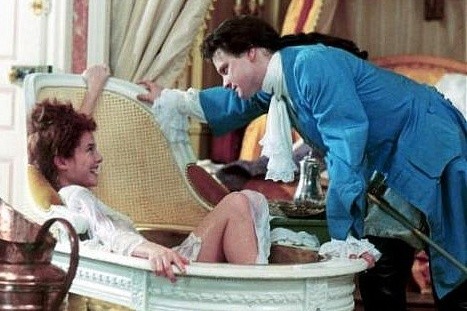 An all-too familiar scenario that when similar pictures are released close to each to each other, the first out of the gate tends (not always) to pick up the majority of the box office business.

Frears’ film was excellent (aside from Keanu Reeves), but I prefer Valmont, mainly because a young Colin Firth (the titular character) and Annette Benning (Merteuil) are in my view considerably sexier than their counterparts in the 1988 movie, namely John Malkovich and Glenn Close.

But, with no offence to Firth’s then wife Meg Tilly, Michelle Pfeiffer is vastly superior as Madame Marie de Tourvel in Liasons.

Forman’s facility with a broad canvas was evident from Amadeus (1984) and with Valmont‘s budget of $33m over twice that of Dangerous Liaisons ($14m),  most of that is clearly visible onscreen. You’ll notice some of Forman’s old Amadeus cohorts in the picture, including Jeffrey Jones and Vincent Schiavelli.

Siân Phillips is very good as Madame de Volanges (Swoosie Kurtz in Liaisons). The plot? sexual intrigue and revenge in aristocratic pre-Revolutionary France. The story was updated as the lousy Cruel Intentions in 1999, with the reliably dead-eyed Ryan Phillippe attempting to xerox Malkovich’s performance.

CRUEL INTENTIONS - Official Trailer - Back in Theaters for the 20th Anniversary

In 2003 another updated version of the story was broadcast – this time a French television mini-series directed by Josée Dayan, with a starry cast including Catherine Deneuve, Rupert Everett, Nastassja Kinski and Leelee Sobieski.