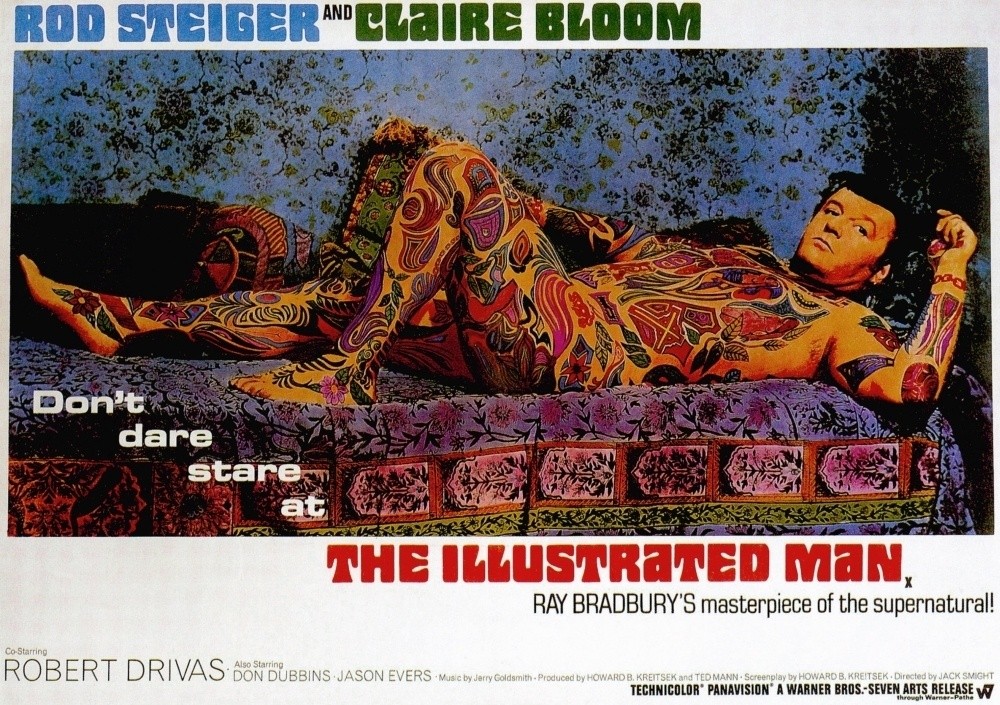 The Illustrated Man is a 1969 American science fiction film directed by Jack Smight and starring Rod Steiger as a man whose tattoos on his body represent visions of frightening futures. It tells the story of a young drifter is led into a world of fear when the images on the skin of a tattooed hobo come to life.

It tells you something of how mores and morays have changed since the late 1960s that that Rod Steiger’s tattoo (skin illustration!) covered vagrant Carl was regarded as something of a freak, worthy of being exhibited in a carnival.

Nowadays…walk down many city/town streets and the likelihood is that you’ll see someone with virtual full body tatts (skin illustrations!).

The movie is an odd and quite grim portmanteau collection of Ray Bradbury stories, directed by Jack Smight, who helmed the very enjoyable No Way to Treat a Lady (again 1969), which also coincidentally starred Steiger.

Steiger plays ‘The Illustrated Man’ of the movie’s title in the framing passages as well as the protagonist in the three downbeat sci-fi tales featured in the picture.  His then wife Claire Bloom co-stars (playing the mysterious tattooist, as well as three other roles), with Robert Drivas (Cool Hand Luke) as Willie, another traveler on the road. 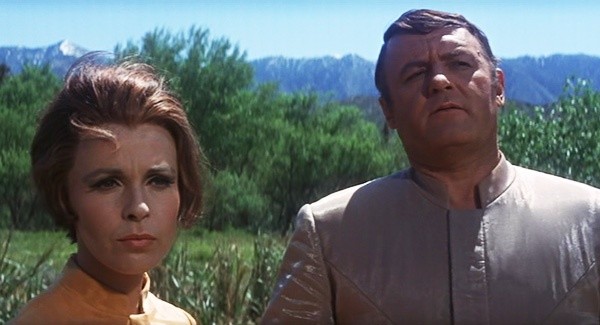 To say Steiger is charmless in the film is an understatement, with the actor playing all four roles in a permanent obnoxious grump which would make any sane person cross the road to avoid him. And then start running at fair clip.

They are Skin Illustrations

Still, there is a haunting quality to the picture which sticks in the mind long after viewing. It’s based on a 1951 collection of short stories by sci-fi supremo Ray Bradbury (well, mostly sci-fi), all narrated by the eponymous Illustrated Man, who has “living tattoos” that “predict the future” (actually merely painted by a woman from the future in the books, but let’s not quibble).

Bradbury didn’t have much luck with movie adaptations of his work, as Something Wicked This Way Comes (1983) and A Sound of Thunder (2005) attest. Personally I liked the TV mini-series of his Martian Chronicles (1980), but it’s something of an acquired taste…

Also of note, back in 2012, Zack Synder was said to be continuing his years long ambition to remake the picture. Nothing has been mentioned of this since 2012…

Why Stephen King (& DC Comics) Chose Batman Over Superman
Top Three Reasons Why Hollywood Ran Out of New Ideas
The Disney Hole: Other Animated Hits When the Mouse Was on the Ropes
Classic Reviews: One From the Vaults 'No Way to Treat a Lady' (1968)
Duck You Sucker! Sergio Leone's Final & Perhaps Greatest Western
Dictator Hagiographies: Air-Brushed Totalitarianism On-Screen
Watch: Shock Value & Clever Novelty in Films Has a Finite Shelf-Life