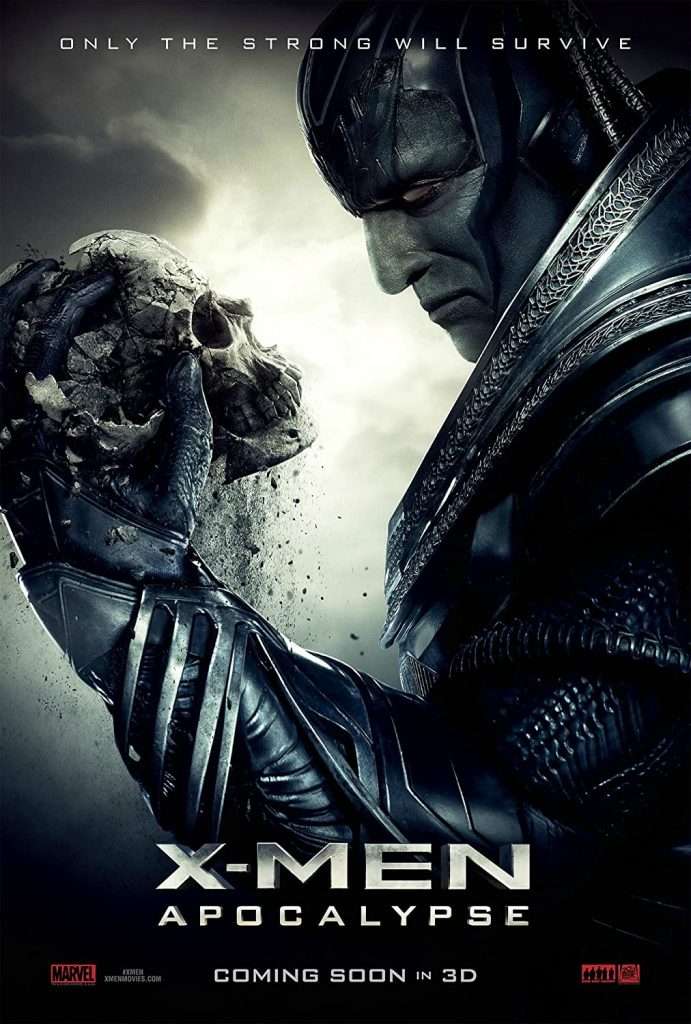 #6 in my ranking of the X-Men franchise

I have a soft spot for this movie. If it weren’t for one extended sequence that seems horrendously out of place and pointless, I’d even go so far as to call this good. It’s not, but I’m almost there. This is such a big hearted movie with big spectacle and big emotions that I almost feel bad for not liking it just a little bit more than I do.

It starts audacious with a prologue set in Ancient Egypt as Ra, or Apocalypse as he comes to be known, is being carried to a pyramid where he will undergo a transference into a new body. As the first mutant, he’s used this transference process to inhabit and steal the mutant abilities of others, gaining a series of gifts that make him incredibly powerful. The newest body is one that self-heals instantly (like Wolverine), and during the process, when Ra is at his weakest, a revolution of the guard takes place, trying to bury him and his four mutant lieutenants under the wreckage of the pyramid that collapses over them. This is outrageous special effects driven stuff, and I liked it. The bulk of the film takes place in 1983, and it only sort of makes sense. Alex Summers was in First Class as, perhaps, a late teenage in the early 60s, who now has a brother in high school in 1983. I mean…maybe? It’s certainly possible, but this jump from 1972 to 1983 feels like an effort to extend time by a decade in a cute display more than anything else. Anyway, Alex’s young brother, Scott, will end up as Cyclops in the future, and the sudden burgeoning of his powers in the middle of the school day brings Alex back home to guide Scott to Xavier’s School for Gifted Youngsters. He functions as our window into the world, who would have been our main character in an earlier entry in this franchise instead of the tenth movie. Perhaps that’s why he’s not actually the main character. The movie doesn’t really have one. This is part of the movie’s problem in that it doesn’t really have a core to fall onto. There are a lot of characters floating around, and they only interconnect in the most facile of ways. Scott Summers figures out his powers. Jean Grey has to discover that how to control her immense powers that she doesn’t understand. Magneto has to deal with the fact that he can’t lead a normal life. Xavier is leading his students in their first major threat together against an enemy so strong that he doesn’t know if they can fight it. Raven is dealing with her reputation as a symbol for mutant rights while trying to work undercover to rescue mutants from horrible conditions like being forced to fight each other in an electrified ring. It’s all kind of all over the place, a symptom of an ensemble movie having trouble figuring out how to compellingly bring together a host of unique characters in a single adventure because, as you may know, ensemble pieces are hard.

Apocalypse spends the first half or so of the movie refilling the ranks of his four lieutenants, recruiting literally the first four mutants he runs across. The individual scenes of him finding these mutants (first Storm, then Psylocke, then Angel, and finally Magneto) are good little scenes where Apocalypse shows them what they want and makes them stronger, but I do feel like there needed to be something where Apocalypse rejects at least one mutant for being too weak somehow. Maybe even Mystique could have been that. That leads to me Magneto. I keep saying it because it continues to be true, but Michael Fassbender as Magneto was the best casting choice in this franchise. He starts the film as a steel worker in Poland with a wife and daughter, trying to hide from the world and his past anonymously. When Apocalypse awakens, sending shockwaves across the world, Magneto instinctively uses his power to save a worker in the mill, but it does not go unnoticed. The local police show up without any metal to arrest the man they’ve figured out to be the international criminal Magneto, accidentally killing his wife and daughter, and sending him into a rage, killing everyone with a locket he had given his daughter, and prepped for recruitment. I wish this section was longer by at least ten minutes. Magneto himself should have been a greater focus overall. He has the best arc of any character in this movie, having tried to escape his past by leading a small life, only to have it taken away from him. He rejoins the fight by joining with Apocalypse to bring about the end of the world, only to question his new place and the pain he’s causing. It’s great stuff and should have been the bedrock on which the whole movie was built. Instead, it’s a small part of a less cohesive whole. Apocalypse makes his way to Egypt after his travels around Europe to find his four horsemen and starts the process of remaking the world in his image, but first he gets his hands on Xavier, planning on transferring his consciousness into Xavier’s body to acquire Xavier’s powers. This is the darkest the movie gets tonally as Apocalypse appears in the Xavier Mansion, pulls Xavier away, killing Alex Summers in the process and the X-Jet gets exploded in the process. Then Quicksilver shows up and repeats his breakout moment in Days of Future Past by listening to the Eurythmics’ “Sweet Dreams” (how that works with a normal tape player, I don’t know), and it’s such a weird tonal shift. The sequence is just as well executed as the similar scene in the previous film, but it’s a testament to story construction in how one ends up working better than the other, because the first fits the tone of the surrounding material better than the second.

Then the movie takes a weird and completely useless detour when Colonel Stryker shows up, kidnaps some of them, and takes them to Alkali Lake where they escape, free Wolverine for reasons, and then get a mental message from the captured Xavier that sends them to Egypt. This needed to get cut completely at the script stage, then the solid fifteen minutes dedicated to a random side adventure could have been given to character work, especially for Magneto.

The finale is a special effects extravaganza with detailed images and a complex structure as some mutants try to get to Apocalypse and Xavier in the middle of a pyramid that Apocalypse willed into existence while the rest fight the four horsemen. Jean Grey ultimately saves the day by tapping into her power, partially unleashing the Dark Phoenix, as the rest fight Apocalypse as a team.

This movie is kind of a mess, but except for the sequence at Alkali Lake, it’s the kind of mess I gravitate towards. It’s solidly entertaining with an outlandish villain and a bunch of likeable characters. Magneto should have been the rock on which this film was built, as opposed to having no real solid foundation, but the messy house of cards almost stands up on its own. I mostly get caught up in the extravagance, but I couldn’t really defend it as a good film. Still, I do enjoy it every time I put it on.