#2 in my rankings of The Omen franchise

If I somehow found myself in Hollywood and given the chance to direct a remake of The Omen, literally the only reason I would take the job would be to have a chance at correcting the mistakes of the original sequels. The original is some kind of stupid mix of operatic absurdity that I somehow find immensely entertaining, but the sequels always take some decent ideas of where to take the story and squander them under 70s and 80s studio notes (the less said of the fourth entry, the better). John Moore (who would later go on to direct the abysmal A Good Day to Die Hard), was given the assignment, and the script by Dan McDermott (denied a credit by the WGA because his script was too close to the original written by David Seltzer) makes some interesting, albeit fairly small, changes that, when combined with the change in tone brought on by Moore, create a fairly interesting, if not entirely successful, attempt at a remake.

Really, this is the same movie as the first all over again. Beat for beat, the remake follows the original from the replacement baby to the suicidal nanny to the seemingly insane Father Brennan to the death of the adoptive mother to the failed attempt to take the life of the Antichrist by the adoptive father. Literally beat for beat. Some of the details have changed (like the photographer’s beheading coming from an errant sign instead of a plate of glass), but this is literally the same plot rehashed. That really doesn’t bother me at all, by the way. Tell the same story twenty times, I don’t care. It’s how you tell the story that’s important, and the combination of McDermott’s changes to the script and Moore’s direction create something kind of interesting. 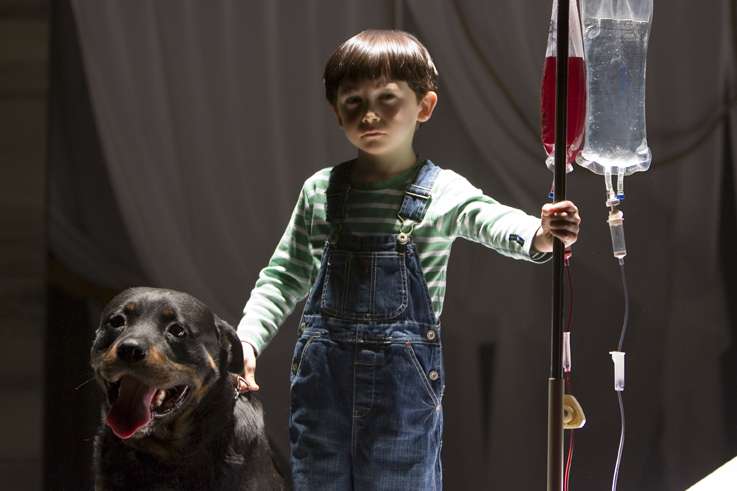 There are improvements here over the original, and they largely start and end with the character of Katherine Thorn (Julia Stiles). Wife to the deputy ambassador of the United States to Italy, and soon to be full ambassador to the Court of Saint James in the United Kingdom, Robert (Liev Schreiber), I felt like she was pretty much archetype in the original. Here, her descent into doubt about her son, Damien (Seamus Davey-Fitzpatrick), is given much more attention, including a few creepy dream sequences, and by the time she was demanding an abortion for her second child, I was feeling her pain. The distance she was beginning to feel from her supposed son was actually quite strong, accumulating in small moments like Damien scaring her in the park or ignoring her in the middle of the night as he makes a sandwich. Her steady descent into doubt about her own motherhood of the boy she thought to be her own child was quite good. And it got me thinking. 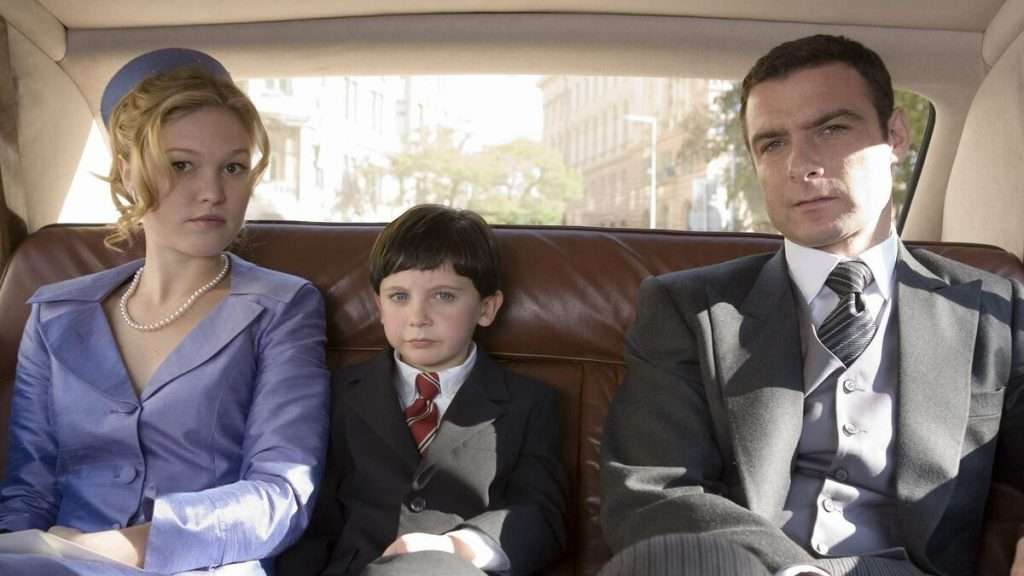 If there’s a way to make this ludicrous story a legitimate, high-brow, horror classic, it’s to focus on one of the parents. The first half largely ignores Robert, but the second half greatly misses the presence of Katharine. It would require a fairly extensive rewrite, but I think the best way to approach this material would be to simply pick a point of view, and, based on this remake, I think the point of view to choose is Katherine’s. The idea of a mother steadily seeing her little boy become an unrecognizable person is an inherent experience in all of motherhood. The baby who cooed at you for every little thing is replaced by someone who has their own sense of humor, priorities, and concerns. Combine that with the idea that the child is the Son of the Devil, and you’ve got the makings of a horror film. I lean towards Katherine because the first half of the film really doesn’t create much for Robert and Damien to have a relationship at all. He works, as Ambassador to the United Kingdom from the United States, all the time, only popping in to give his son a hug every now and again. He, essentially, doesn’t know the boy, so his discovery of him having always been the Son of the Devil doesn’t feel impactful. His confession to Keith (David Thewlis), that he’s raising a boy who is not his son feels empty to a certain degree because he hasn’t been raising his son. That could be fixed in a rewrite, somehow I imagine, but the story really does lend itself much more towards the mother taking center stage here. 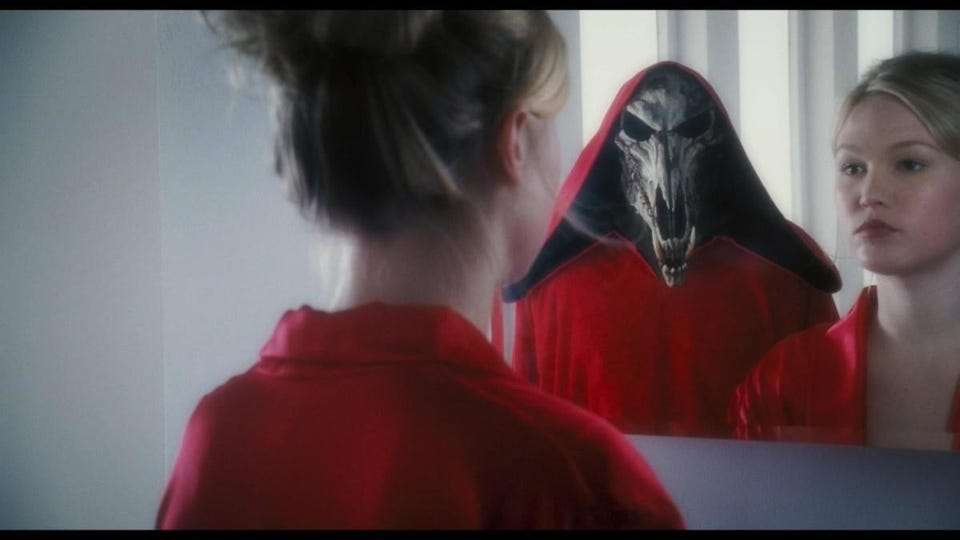 I was pretty onboard with this film until Katherine died. The opening death of the first ambassador to the United Kingdom was overproduced nonsense, but the rest of the deaths had been almost subdued in comparison to the original. The nanny still hangs herself in front of the birthday crowd, but she doesn’t crash through a window for extra, operatic effect. Katherine dies by an injection into her IV instead of a mysterious jump out off a hospital window. Moore, for all of his faults as a director, has a certain eye and it worked well with the more subdued approaches in the script. The death of Father Brennan is kind of hilarious in a bad way in contrast, but the moments leading up to it are smaller and work pretty well as build up. The movie doesn’t really lose me, but my interest did diminish after Katherine’s death specifically because Robert is less invested in Damien as a character. In addition, the rest of the movie is much more of a strict remake than the small additions to the first half are, so the more slickly handsome approach by Moore ends up undermining the material slightly. It’s all ridiculous, still, and losing the operative flare of the original doesn’t do the material great favors. It’s slick and fine, but it doesn’t have that kind of huge absurd fun in the first film. It goes from the interesting first half that focuses on Katherine to the less engaging second half focusing on Robert. 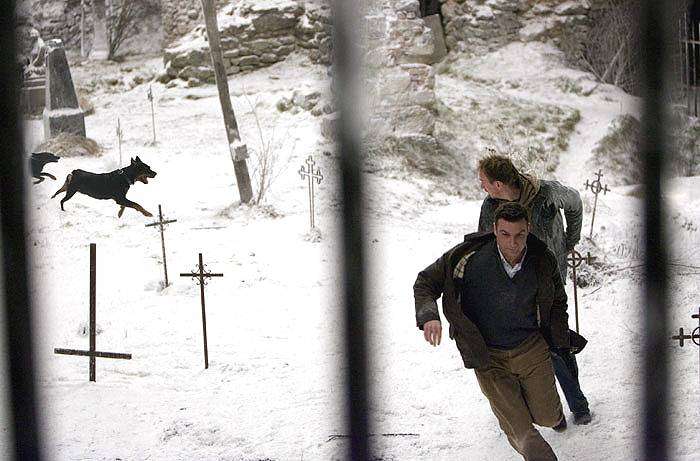 Is this movie bad? Not at all. In fact, it’s the best Omen movie since the original, which is, honestly, not saying a whole lot. If this were an original horror film from the 00s, I think it would be better received because it wouldn’t have the first film, which is so different, to compare or contrast against. It expands, ever so slightly, where it should, and then falls into simple retelling with a style that doesn’t quite fit the material as well. I’m actually kind of surprised that it never spawned any sequels, though. It wasn’t exactly unprofitable, and there’s always room for more adventures of the Antichrist accumulating power.