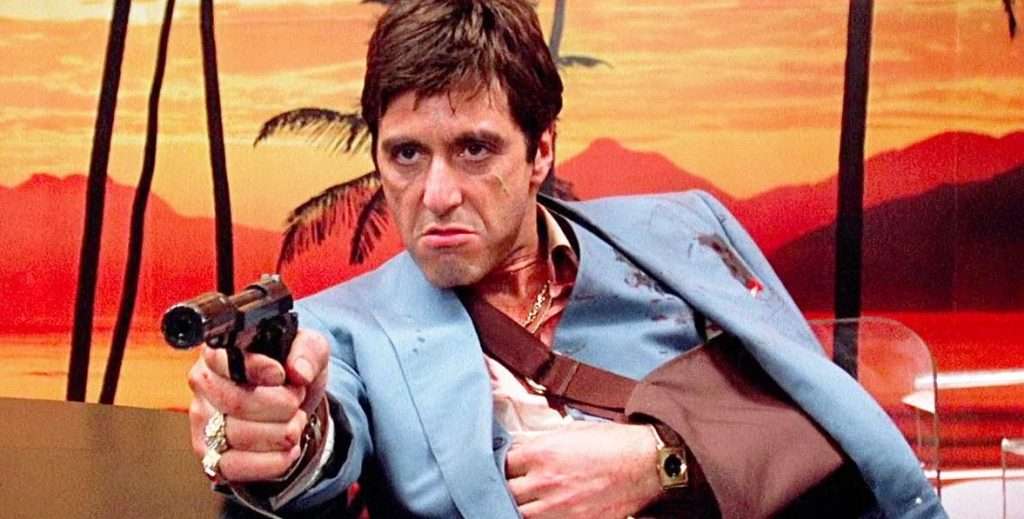 I’ve been on a bit of a tear against poor writing, but the fact is one doesn’t have to come up with something completely original in order to provide quality entertainment.  Right now we’re in a strange place where Hollywood seems to be rebelling against what it considers to be conventional plots, yet its solution is simply woke incoherence.  That’s not subverting expectations, it’s failing to meet them.

The fact is, you can have a very satisfying film even if the outcome is largely known in advance.  Scarface is a great example of this.  It’s a classic “rags to riches to ruin” story, full of foreshadowing, but it’s crazy fun to watch.   Why does it succeed when so many modern films fail?  Let’s count the ways.

Obviously, casting is a crucial part of any production and Scarface is dominated by Al Pacino’s rabid portrayal of Tony Montana.  His Cuban accent is all over the place, but it doesn’t matter because he’s always stealing the scene.  The supporting cast is likewise larger than life, all decked out in awful late 70s disco suits.  Mary Elizabeth Mastrantonio is great as Tony’s rebellious kid sister Gina and Steven Bauer does signal work as his faithful henchman Manny.

The only odd note was choosing Michelle Pfeiffer as Tony’s femme fatale.  She’s not the typical eye candy, but she absolutely nails the part of the ice-cold cartel babe.  Her lack of amplitude (so to speak) also is appropriate given the fact that she appears to subsist entirely on drugs and alcohol.

What you have then a bunch of people hamming it up and clearly having a great time doing it. 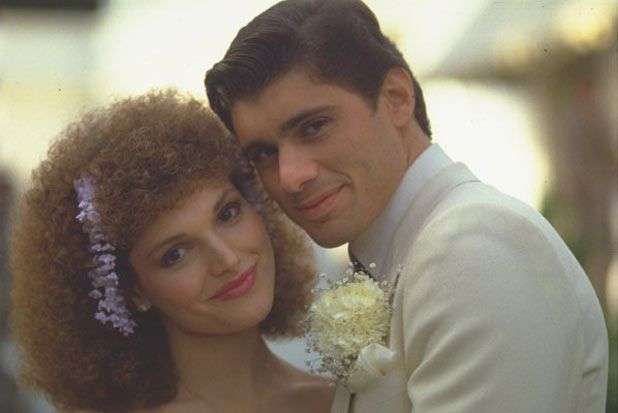 For all that I rip on Pacino’s over-the-top portrayal of Tony, the character isn’t one-dimensional.  He’s savage and cruel, but not without moral limits.  He refuses to target women and children, for example.  He tries to protect his sister from the degeneracy of his lifestyle and wants to raise a family of his own.  He’s arguably a more garish and F-bomb dropping version of Michael Corleone from the Godfather films.

Of course, that low-class brutality is part of the experience of watching Scarface, which has to have set some sort of record for the tackiest displays of wealth ever committed to film.  Still, it serves a profound narrative purpose because even when Pacino achieves his goals, he feels a hollowness because pure materialism isn’t enough to satisfy the soul. 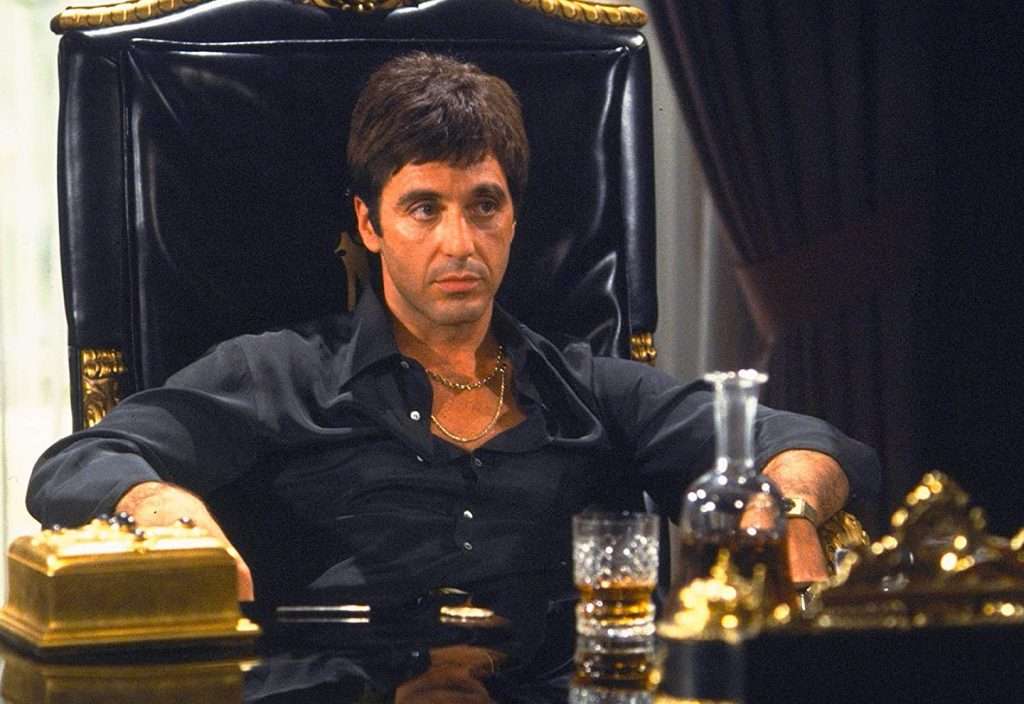 There has always been political bias in Hollywood, but Scarface is a throwback to a time when there were limits to what people would put up with.  The first ten minutes are a blisteringly savage indictment of Jimmy Carter’s handling of the Mariel Boatlift, a clever gambit by Fidel Castro to empty Cuba’s prisons of violent criminals under the pretense of allowing political dissidents to escape to the US.  The title credits use actual footage of the event, and the subsequent scenes where Tony lies his way through Immigration all managed to have Carter’s official portrait prominently displayed on the wall.  The message is as subtle as a sledgehammer – Carter brought all this violence on the country.

Of course, in today’s politics, open borders are a moral imperative, and anyone who questions whether allowing drug cartels free reign is shunned as a bigot by the mainstream media.  Scarface is a throwback to a time when it was universally agreed that letting Cuba turn south Florida in a penal colony was a bad idea. 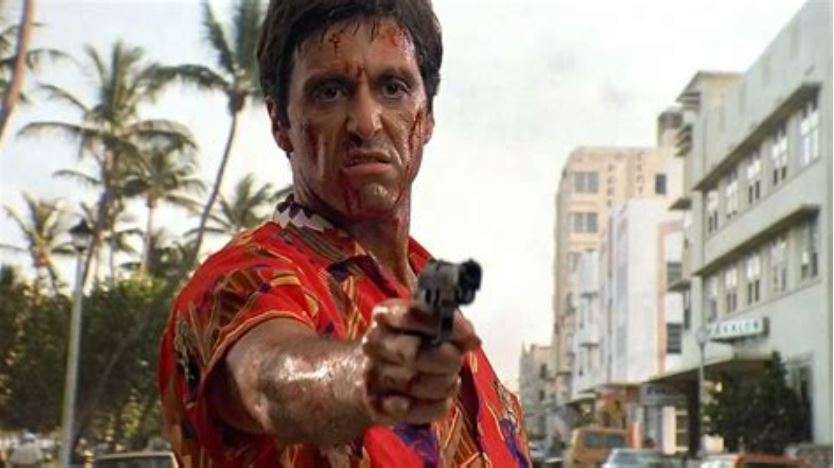 Scarface is one of those movies that is remarkably complete.  Even the soundtrack is pitch-perfect, moving from up-tempo disco to solemn brooding chords.  That’s not surprising, given it was composed by the legendary Giorgio Moroder.  I’ve often said that the real test of a movie is whether it accomplished what it sets out to be.  Scarface is a tale of the early 80s drug trade in all its glitzy violence.  It fulfills that role perfectly, which just enough detail to humanize the characters without bogging the story down.

Current writers could take a lesson on how you can take a familiar story, add some contemporary twists and produce an F-bomb laden classic.

Diagnosing Hollywood: When Woke is All You Know, It's All You Write
Could America's Tanking Economy Save Hollywood from Itself?
Robert Zemeckis Films Ranked: #18 – ‘What Lies Beneath’ (2000)
Anti-Maverick: Tom Cruise's Insufferable "The Last Samurai"
Dammit! Top Gun Maverick is Actually a Decent Movie After All
Batman Films Ranked: #3 ‘Batman Returns’ (1992)
A Tedious 'Fury Road': Where George Miller Went Full George Lucas