Lately, movie reviews and true accounts of high strangeness have become popular post subjects here. With the spooky season upon us and Hollywood on its knees due to Corona-chan, I thought it fitting to post my analysis of a movie that is itself a nexus of high strangeness.

Said to have started as a labor of love on the part of a close childhood friend of Brandon Lee, The Crow was intended as a vehicle for the rising star which would set his career path in his legendary father’s footsteps. The producer’s ambitions were realized, not in the manner of an answered prayer, but a monkey’s paw.

The movie rights to James O’Barr’s cult indie comic were secured. Filming began at Screen Gems Studios in Wilmington, North Carolina under then-fledgling director Alex Proyas. Operating on a shoestring budget, the troubled production became a hotbed of grim whispering around the studio. “They were trying to make a $30 million movie on an $18 million budget,” one crew member said.

Creative passion prevailed over temporal limitations, but at a high and immediate cost. Corners were cut wherever the non-union studio allowed. The crew found themselves working 24 hour shifts to come in on time and under budget. The inevitable ensued.

On the first day of filming, a carpenter suffered severe burns. Not long after, another crew member skewered his hand with a screwdriver. A stuntman fell through a ceiling, breaking multiple ribs. A rigger met a grisly end by electrocution.

All of those accidents, thought horrible, could be attributed to unsafe working conditions due to lax safety procedures and overwork. What happened next incited serious talk of the movie being cursed. 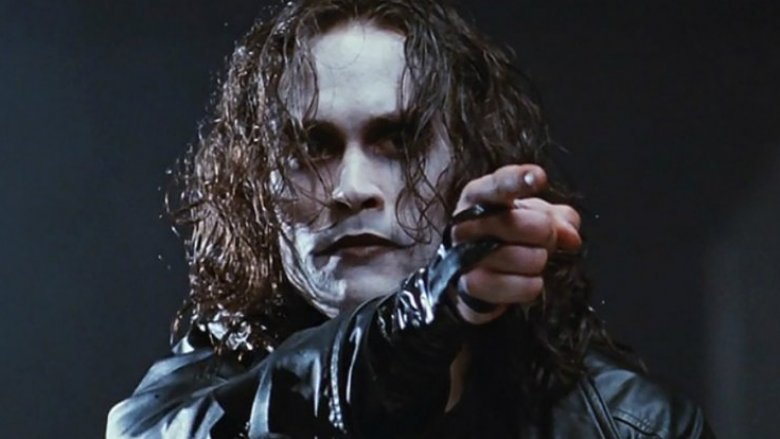 First, a supply truck exploded for no known reason. Then, a sculptor had a breakdown and rammed his car through the prop department. As if giving the final word against purely human agency behind the string of disasters, a hurricane hit the studio, wrecking several Crow sets.

But all of those calamities were a mere prologue to the movie’s crowning tragedy.

On March 31, 1993, at EUE Screen Gems Studios in Wilmington, North Carolina, Lee was filming a scene where his character, Eric, is shot after seeing them beat and rape his fiancèe. Actor Michael Massee’s character Funboy fires a .44 Magnum Smith & Wesson Model 629 revolver at Lee as he walks into the room. A previous scene using the same gun had called for inert dummy cartridges fitted with bullets, but no powder or primer, to be loaded in the revolver. For close-up scenes that use a revolver, where the bullets are clearly visible from the front, and do not require the gun to actually be fired, dummy cartridges provide a more realistic appearance than blank rounds, which have no bullet. Instead of purchasing commercial dummy cartridges, the film’s prop crew, hampered by time constraints, created their own by pulling the bullets from live rounds, dumping the powder charge then reinserting the bullets. However, they unknowingly left the live percussion primer in place at the rear of the cartridge. At some point during filming, the revolver was apparently discharged with one of these improperly-deactivated cartridges in the chamber, setting off the primer with enough force to drive the bullet partway into the barrel, where it became stuck (a condition known as a squib load). The prop crew either failed to notice or failed to recognize the significance of this issue. 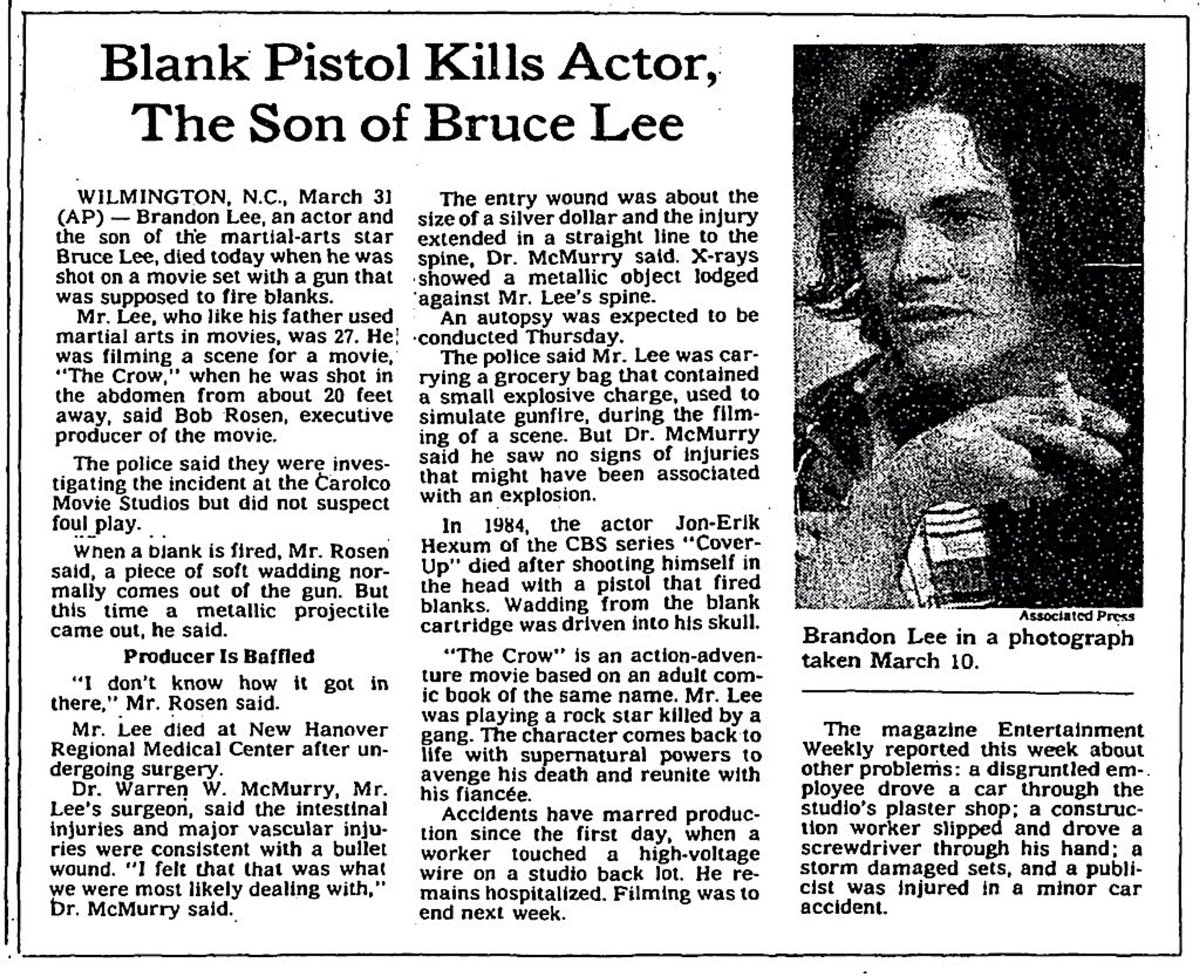 In the fatal scene, which called for the revolver to be actually fired at Lee from a distance of 12–15 feet, the dummy cartridges were exchanged for blank rounds, which feature a live powder charge and primer, but no bullet, thus allowing the gun to be fired without the risk of an actual projectile. As the production company had sent the firearms specialist home early, responsibility for the guns was given to a prop assistant who was not aware of the rule for checking all firearms before and after any handling. Therefore, the barrel was not checked for obstructions when it came time to load it with the blank rounds. Since the bullet from the dummy round was already trapped in the barrel, this caused the .44 Magnum bullet to be fired out of the barrel with virtually the same force as if the gun had been loaded with a live round, and it struck Lee in the abdomen, mortally wounding him. He was rushed to the New Hanover Regional Medical Center in Wilmington, where he underwent six hours of surgery. However, attempts to save him were unsuccessful, and Lee was pronounced dead at 1:03 pm EST on March 31, 1993 at the age of 28. The shooting was ruled an accident.

Everyone thirsts for fame and glory. Few understand the sacrifices and Faustian bargains–sometimes literal–that must be made to reach the top, especially in the arts.

The Crow‘s producer faced a stark choice: He could cut his losses and go home empty-handed, or he could put a film crew already pushed to the breaking point through even more emotional strain, risk accusations of exploiting Lee’s death, and finish the movie.

Keep in mind that at that point, the original distributor had backed out, and finishing the picture would take $8 million the beleaguered production didn’t have.

How many people would have the determination to forge ahead in pursuit of their vision despite such crushing setbacks?

The crew decided to press on and finish the work they’d begun on The Crow. They chose to do it for Brandon.

And they succeeded. The Crow opened at #1 to rave reviews and made Brandon Lee a legend like his father before him, for good or ill.

Were the accolades heaped on the movie by contemporary critics and its cult fan base deserved? Let’s take a look at the finished product. 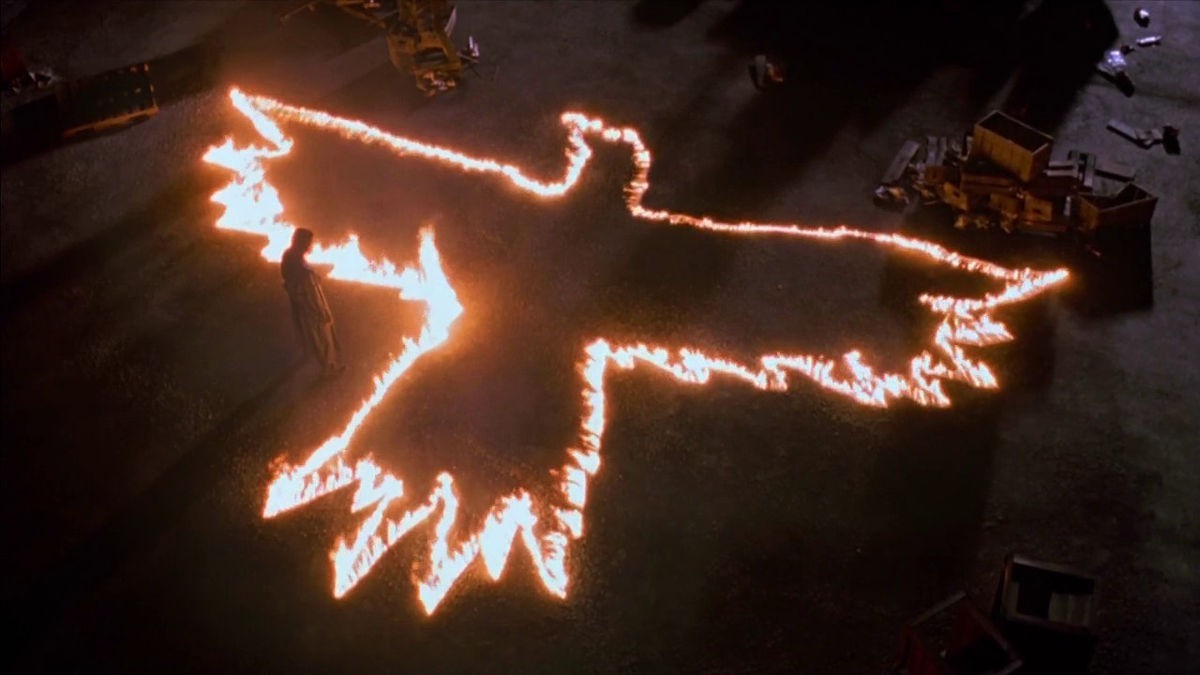 The Crow won high praise for its visuals, which were compared favorably to other dark superhero movies like Tim Burton’s Batman films. In contrast to Burton’s ageless, borderline surreal set designs, Proyas chose an aesthetic that perfectly expressed early 90s gothic punk moodiness. In other words, the artificially decayed Detroit sets look slightly better than the real Detroit does today.

Proyas does achieve the effect Burton pulled off, using the visual language of film to transport the audience into a fully realized world. Much like Burton’s Gotham, Proyas’ Detroit is more than a setting for a film; it’s a key character in the film.

The Crow doesn’t stop at captivating visuals. Its audio delivers a heady selection of goth rock and metal anthems that makes the soundtrack a force to be reckoned with. The melancholy yet high energy tracks are expertly woven into the action to impressive effect.

Aristotle ranked plot and character as the most important story elements. The Crow punches far above its weight in the latter category. This movie’s rogues gallery of oddball gangsters and witchy kingpins hunted by an undead rocker could easily have been made ridiculous in lesser hands. But every key actor–especially Michael Wincott, David Patrick Kelly, Tony Todd, Jon Polito, and of course Brandon Lee–plays his part with unbridled gusto. They invest The Crow with a level of heart only seen in movies the cast knew were important. 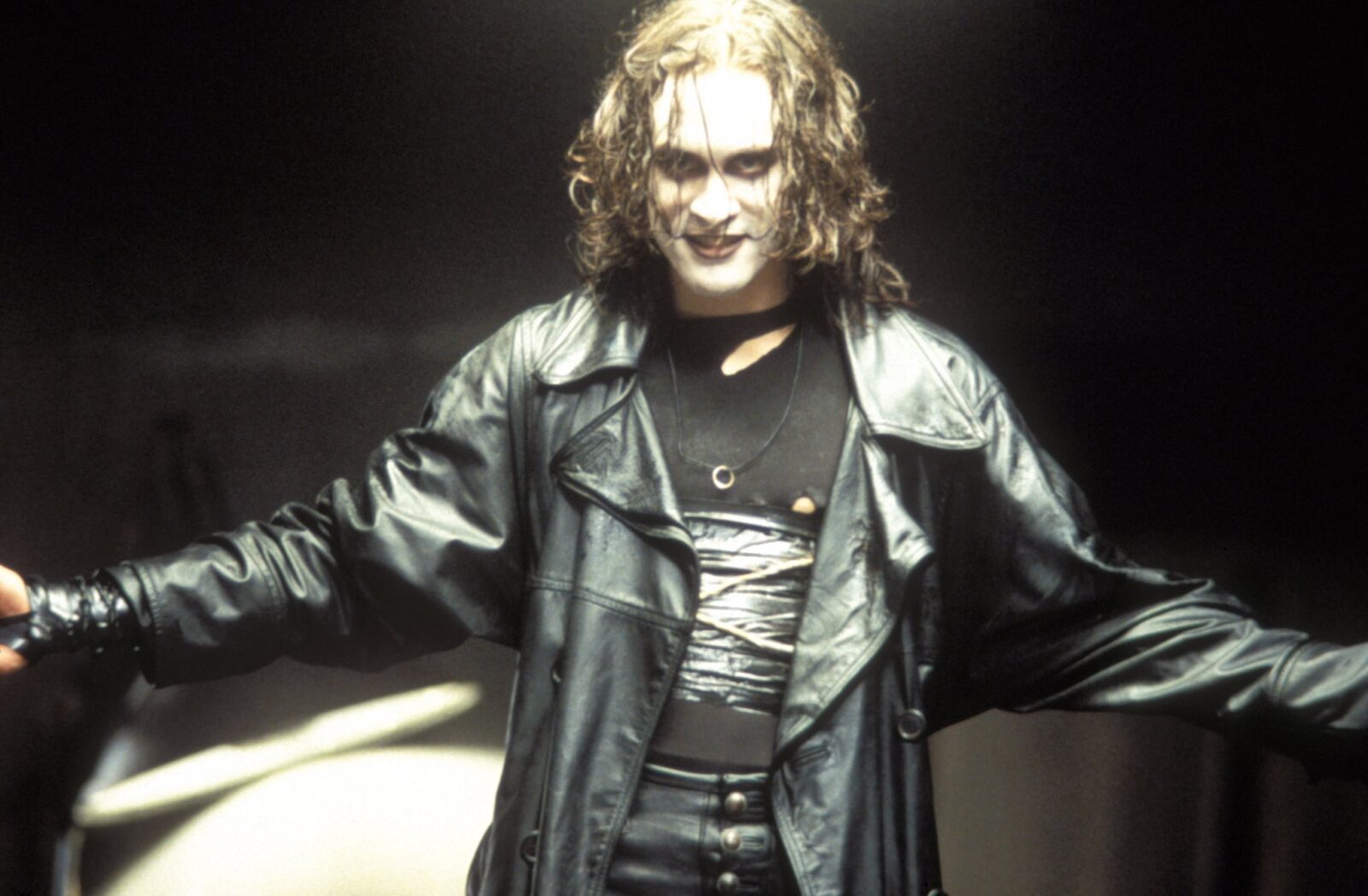 So much for character. What of the plot? That–along with the now-dated CG–is The Crow‘s one weak point. Now, the dark avenger hunting down his fiancée’s killers is a classic plot ripped straight from the beloved comic. It’s got built-in character, conflict, and high personal stakes. Adapting that story for film required some alterations, though, not all of which went smoothly.

Related aside: One key conceit from the movie–that Eric died and returned to exact vengeance from beyond the grave–is not explicit in James O’Barr’s original graphic novel. A common interpretation of the events in the book is that T-Bird’s gang left Eric horribly injured but alive. Instead of rising from his grave, he emerged from a coma a year later with brain damage that left him psychotic but immune to pain. It’s only after taking his revenge that he succumbs to his wounds. Take that for what it’s worth.

Much as Batman is actually a Western in a cape, The Crow is a Hong Kong crime movie in the vein of John Wu caked with goth makeup. That’s why it made a perfect vehicle for Brandon Lee despite initial puzzlement over its horror themes.

Anyway, the first two acts of the movie proceed swimmingly. Eric kills his killers one by one and reconnects with characters from his living days in the process. The inclusion of a pet-the-dog moment when Eric cures a single mother’s morphine addiction cements the audience’s emotional investment.

Then we get to the third act and hit some big bumps in the road.

In short, Lee’s untimely death and the scrapping of a character whose look was deemed incompatible with the overall aesthetic necessitated some hasty rewrites of the last act. Whereas originally it was stated that Eric’s powers only worked in the pursuit of his killers, the decision to nix his guide left the writers scrambling to explain why he loses his healing factor in the final battle. 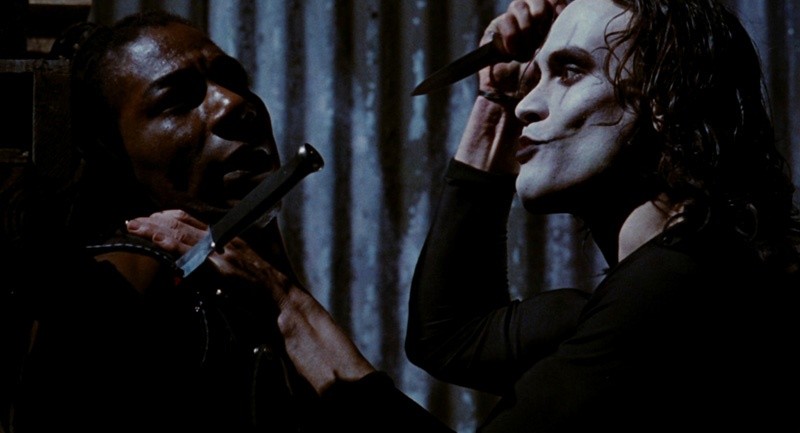 The solution they came up with was to make the crow Eric’s power source–a point found neither in the comic nor in the original script. It works, but just barely, if you’re willing to let the question of why shooting the crow cost Eric his healing factor but not his mind powers slide.

Happily, the stunning visuals, haunting soundtrack, and stellar performances are more than enough to absolve The Crow of its shaky final act. We’ve already had so much fun by the time the curtain comes down, we don’t care that it hangs a bit uneven.

Rest in peace, Brandon Lee. Your legacy is secured.

Review: The Biggest Mistake of 'Star Trek: First Contact'
Freddy Krueger Actor Robert Englund's Doc to Get Theatrical Release
'Star Trek: Generations' Not as Good as I Remembered
Why Star Trek VI: The Undiscovered Country is My Favorite Trek Film
'Star Trek V: The Final Frontier' Isn't Quite as Blasphemous as I Recall
Retro Review: Star Trek IV: The Voyage Home is Totally 80s’ed Out
Star Trek III: The Second-Part of the Best Space Adventure Ever Put to Film