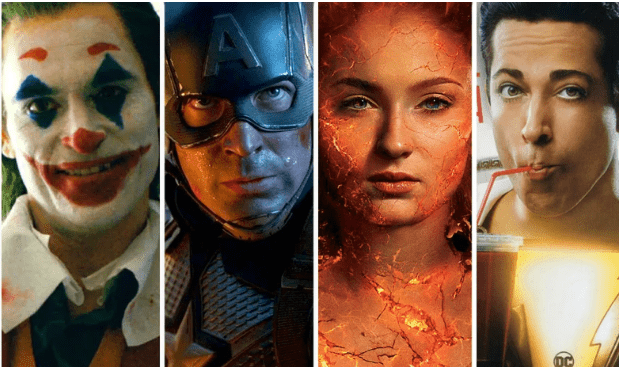 It’s the end of the year, and really the end of the decade (which would be too long an article), so like every other “news & opinion” outlet that appeals to nerds and geeks, we decided to create our own list of the Top 5 and Worst 5 Movies lists, along with one special film that made it on BOTH LISTS…(?)

Let’s begin with the best list in no particular order.

A guilty pleasure to be sure, Parabellum is just as satisfying as its predecessors, but it is not a smart or wise movie — it’s just a really, really fun one. It fills out Wick’s universe a bit more without being too hung up on constructing an elaborate and coherent mythology, and it delivers some truly eye-popping set pieces. John Wick: Chapter 3 – Parabellum reloads for another hard-hitting round of the brilliantly choreographed, over-the-top action that fans of the franchise demand.

Effectively Tom Hanks’ ‘Big‘ in tights, Shazam! effortlessly blends humor and heart, in a superhero movie that never forgets the genre’s real power: joyous wish fulfillment. As in Big, the film features a boy in an adult’s body. Most of the best jokes here come when Billy is turned into a superhero, complete with ridiculous spandex suit with a gold lightning symbol on his chest. Just as Billy/Shazam is a teenager in an adult’s body, the film itself is a children’s adventure in the form of a grown-up superhero movie. It oscillates between seriousness and extreme whimsy. Very entertaining, if a bit ludicrous.

Still, piggybacking on the “Avengers” narrative represents an advantage that somewhat muddies the analysis of this movie, but it’s a blast if you don’t think about it too hard. The movie’s creative shortcomings, which are minor, seem necessary when you consider the challenge of sustaining a massive interlocking “cinematic universe.” There was concern that many of the major casualties suffered in “Avengers: Endgame” may have left holes in Marvel Studios’ merry marching society, which would require a little time to absorb and recover, but the movie goes smaller, more intimately with a breezily unpredictable blend of teen romance and superhero action to compensate. While depending on a perhaps typically mediocre MCU villain and the reappearance of (imposter) Nick Fury, Spider-Man: Far from Home stylishly sets the stage for the next era of the MCU.

And speaking of Avengers: Endgame

Exciting, entertaining, and emotionally impactful, Avengers: Endgame does whatever it takes to deliver a satisfying finale to Marvel’s epic Infinity Saga. Thanos wiped out half the universe and fractured the Avengers ranks in Infinity War, leaving the remaining Avengers to take one final stand in Marvel Studios’ grand conclusion to twenty-two films, in “Endgame.”  Marvel fans who’ve been following these characters throughout all 21 films before this one will enjoy the carefully-crafted callbacks and countless easter eggs from previous films. Watching favorite Marvel superhero characters interact in new, different and moving ways does not disappoint. Several of the film’s greatest scenes are laugh out loud funny, along with a few that will create a sudden dust storm in your theater or den… (I’m not crying… you are!)

All in all, unlike Captain Marvel, this movie was a must-see for the die-hard MCU fans. Endgame definitively closed a few chapters in the Avengers saga in highly satisfying fashion. It is a tremendously entertaining intergalactic trip. After this film, I have to admit that I’m not too excited about some of the 2020 releases, but will definitely be checking out Black Widow.

The infamous ‘clown prince of crime’ gets a chillingly plausible origin story that serves as a brilliant showcase for its star Joaquin Phoenix and a dark evolution for comics-inspired cinema. Twisted, funny, disturbing, and beautiful, what Todd Philips has done with this genre-bending was nothing short of genius. The combustible characters and events in “Joker” are plausible, as they were in the old Martin Scorsese pictures, which makes them all the more unsettling. Previous movie versions of Batman’s cackling nemesis,played by Heath Ledger, Jack Nicholson, and Jared Leto, were scarred from the outside by chemicals and razors. But the scars are on the inside for Phoenix’s Joker, who is only tangentially connected to the “Batman” saga.

“Is it just me, or is it getting crazier out there?”

It was a tough year for rebooting franchises and this attempt (and the following three) went nowhere. There are plenty of great stories in the Hellboy comics, but this reboot was not it. Although it starred a capable and enthusiastic David Harbour (‘’Stranger Things’’), the absence of Guillermo del Toro in the director’s chair may have turned off many fans of the previous Hellboy installments, which were generally well-liked. The previous Hellboy star Ron Perlman also didn’t return, which further distanced the new movie from the originals. Perlman wanted to come back for a third movie but only if del Toro returned. For an established property like this to see the worldwide box office not even make back its budget amounts to a dramatic failure, and a big money loss for Lionsgate.

Bottom line: It was just underwhelming and being scheduled between Shazam! and Avengers: Endgame didn’t help.

The property is all about female action hero characters. Charlie’s Angels reboot, which was intended to begin a new franchise based on its action-packed predecessors. But that seems unlikely now after a less than stellar box office. It’s ironic because the film’s director Elizabeth Banks stated in an interview before the film’s release that Charlie’s Angels could be a failure because men wouldn’t want to see an action movie starring women. Banks – who wrote, directed, starred and misguided — pushed heavily on the female-empowerment themes, essentially telling men this movie was “not made for them”. That cagey move resulted in men avoiding the film, and it opened with a dismal $8 million weekend, barely able to earn $17 million in the end. Banks, of course, blamed this on men being sexist towards the movie they were told not to watch.

It’s probably obvious to everyone but Banks that she simply shouldn’t have touched a franchise like Charlie’s Angels if she wanted blockbuster success, but she stated in a similar interview with the Wall Street Journal why she picked Charlie’s Angels to do:

“You’ve had 37 Spider-Man movies and you’re not complaining!” Banks said. “I think women are allowed to have one or two action franchises every 17 years — I feel totally fine with that.”

For the final installment in FOX’s storied, but mixed X-Men franchise, Dark Phoenix was foisted upon fans and savaged by critics, receiving the worst Rotten Tomatoes score of any movie in the 19-year-old, multibillion-dollar-grossing X-Men franchise and also earned the lowest opening weekend gross of any X-Men movie. As Peter Travers of Rolling Stone said “It’s the worst movie ever in the X-Men series. That’s 12 films since the first X-Men in 2000. Even series low points — that’s you X-Men Apocalypse — offered compensations. Dark Phoenix just lies there like a dying fish, futilely flapping about on land while it waits for the inevitable dying of the light.”

Ouch. Can Disney’s acquisition of FOX improve things at the Xavier’s School for the Gifted?

It seemed like a cert that the Fox film would end up being the most infamous box office bomb of the summer, then, but shockingly, another release came along to snatch its crown: Men in Black: International.  As per The Hollywood Reporter, MIB: International only raked up $28.5 million in its first weekend. For comparison, Dark Phoenix debuted to $33 million. That’s not a huge difference, but it does mean that what industry insiders felt was a promising reboot of the sci-fi action-comedy franchise hmade even less of an impact than a superhero movie most fans were expecting to bomb.

In spite of our reviewer John Lemus enjoying the film, I guess that Thor Ragnarok re-teaming of Chris Hemsworth and Tessa Thompson isn’t exactly box office gold without the Marvel seal of authenticity.

There was a major effort to revamp this franchise. New characters were brought in, Arnold Schwarzenegger and Linda Hamilton were brought back, and a millennial outreach was made on screen as the time travel plot was retconned in the process. But even though the “bring back the original actors/characters” worked to varying degrees for Star Wars and Halloween, this film was rejected by audiences to such an extreme that they are still calculating how much Paramount Pictures lost on this disaster, with estimates ranging between $100-130 million.

While audiences remembered/loved Terminator 2, they also remember Arnold Schwarzenegger’s Terminator: Genisys. So while going the legacy sequel route worked for Star Wars, it just didn’t work for Terminator. I doubt he “will be back”.

Yes, it was terrible from a story cohesion standpoint on almost every level, as it attempts to serve multiple masters — the corporate suits, the fandom, and otherwise. It lurches from scene to scene without any finesse. It almost feels like a trip through several enclosed Star Wars habitats that offer a quick glimpse at some of your favorite characters and locations, while never finding a way to make those habitats share the same ecosystem.

The decision by Kathleen Kennedy & J.J. Abrams to bring Emperor Palpatine back not only negates Anakin Skywalker’s sacrifice at the end of Return of the Jedi, it throws the entire original trilogy (OT) into the trash compactor along with the prequels by undermining the prophecy of Anakin being the “chosen one” that was to bring balance to the Force and destroy the Sith. Of course it’s never explained how an evil emperor survives being tossed into the Death Star’s core and disintegrated as the Death Star is blown to dust by the Rebel Alliance, unless you count “dark magic” as an explanation.

And that’s just the tip of the ‘Death Star cannon equipped Star Destroyers’ as to why this film is the worst.

Half in the Bag: The 70-Minute Rise of Skywalker Review

But the two things that put TROS on the BEST FILM list are as follows:

May the Force be with you…

+ Movies I want to see, but don’t have confidence in: Top Gun: Maverick and No Time to Die (please don’t be as “woke” as those trailers indicate, Mr. Bond).

+ Still have some interest in, but they’re probably gonna bomb: Bloodshot, The Eternals, and Birds of Prey (And the Fantabulous Emancipation of One Harley Quinn).

What were your best/worst films of 2019?