We’re just over halfway through 2019, and this year’s comic book offerings feature plenty of memorable issues so far. Are any destined to be beloved classic comics for years to come? Only time will tell, but many candidates are emerging. My top 10 comic issues for 2019 features books from DC, Marvel and Image Comics. It also includes a who’s who of the best writers and artists in the industry today including; Chip Zdarsky, Al Ewing, Kieron Gillen, Robert Kirkman, Robert Venditti, Greg Capullo and Ron Garney. It also features a handful of upstarts that proves the industry has a bright future moving forward. Getting down to just 10 comic issues was extremely hard. Spider-Man Life Story #1, Guardians of the Galaxy #1 and Doomsday Clock #10 all just missed the cut.

It’s time to begin the countdown starting with the tenth best comic issue of the year so far.

Robert Kirkman writes and publishes Die!Die!Die! through his Skybound imprint at Image Comics. The series is one of the most violent, irreverent comics on the market today. Issue 8 features one of the funniest satires of current American political climate I’ve read. President Obama (depressed due to 2016’s election) becomes a fascist dictator. He rides a tank down the street, flipping off cameras at his press release. The rest of the issue is top-notch and completes the first story arc in the series. Unfortunately, Die!Die!Die! is currently on hiatus. I for one can’t wait for it to return with more blood, guts and mocking for everyone. 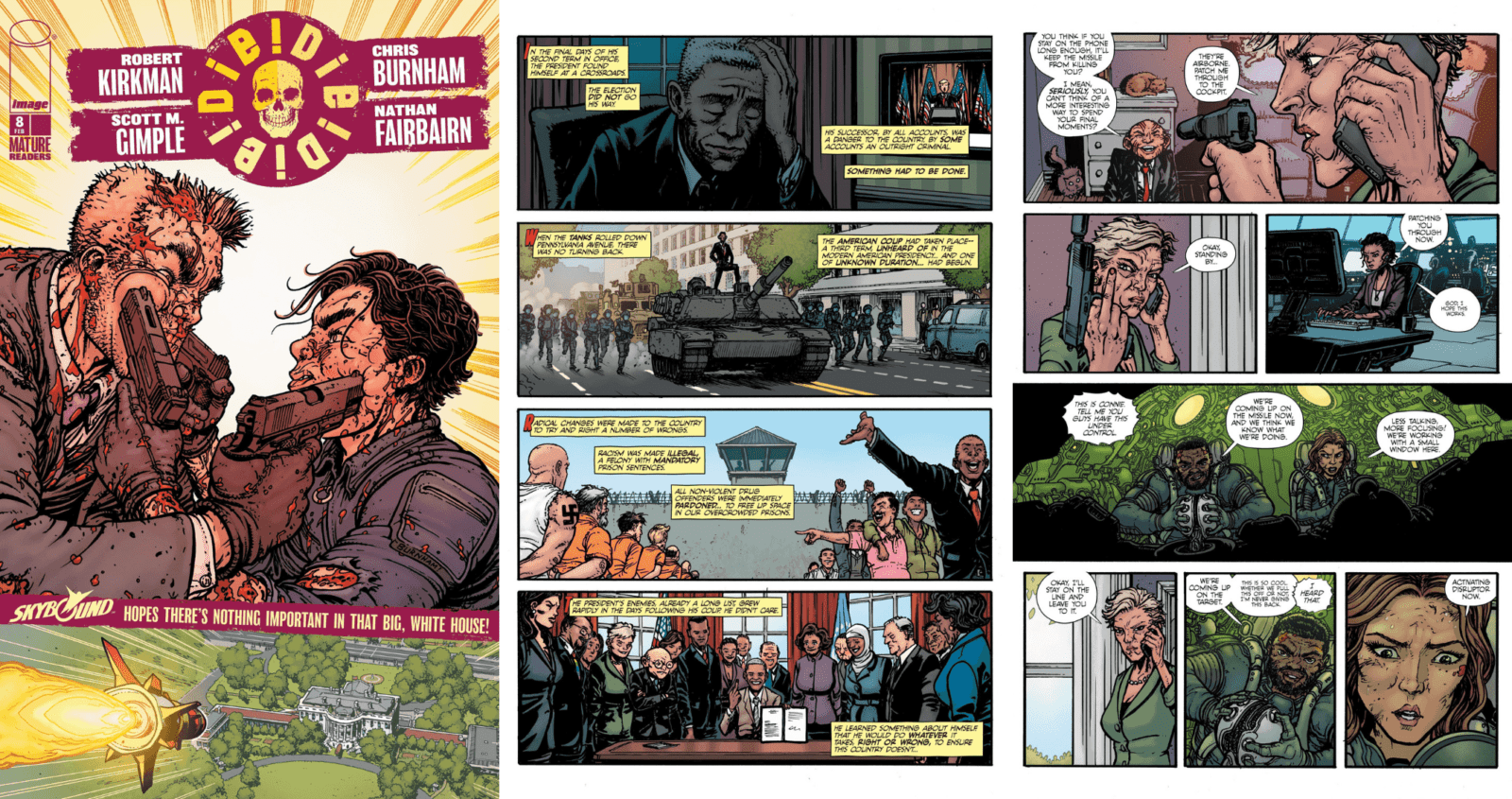 The ninth best comic issue of 2019 is from a creative duo that have been at forefront of crime noir for over a decade now.

Ed Brubaker and Sean Phillips have been telling stories of the Lawless family in the pages of Criminal since 2006. Every issue of this series is must read but the team take it to another level in issue 5. It’s the beginning of a new story arc and features one of the best character introductions I’ve read. Private Investigator Dan Farraday, an ex-cop not cut out for life on the beat, is tracking down the former mistress of his wealthy employer. The issue fleshes out the Vietnam War veteran fully, leaving readers wanting more. Criminal #5 is an expertly crafted character driven story. 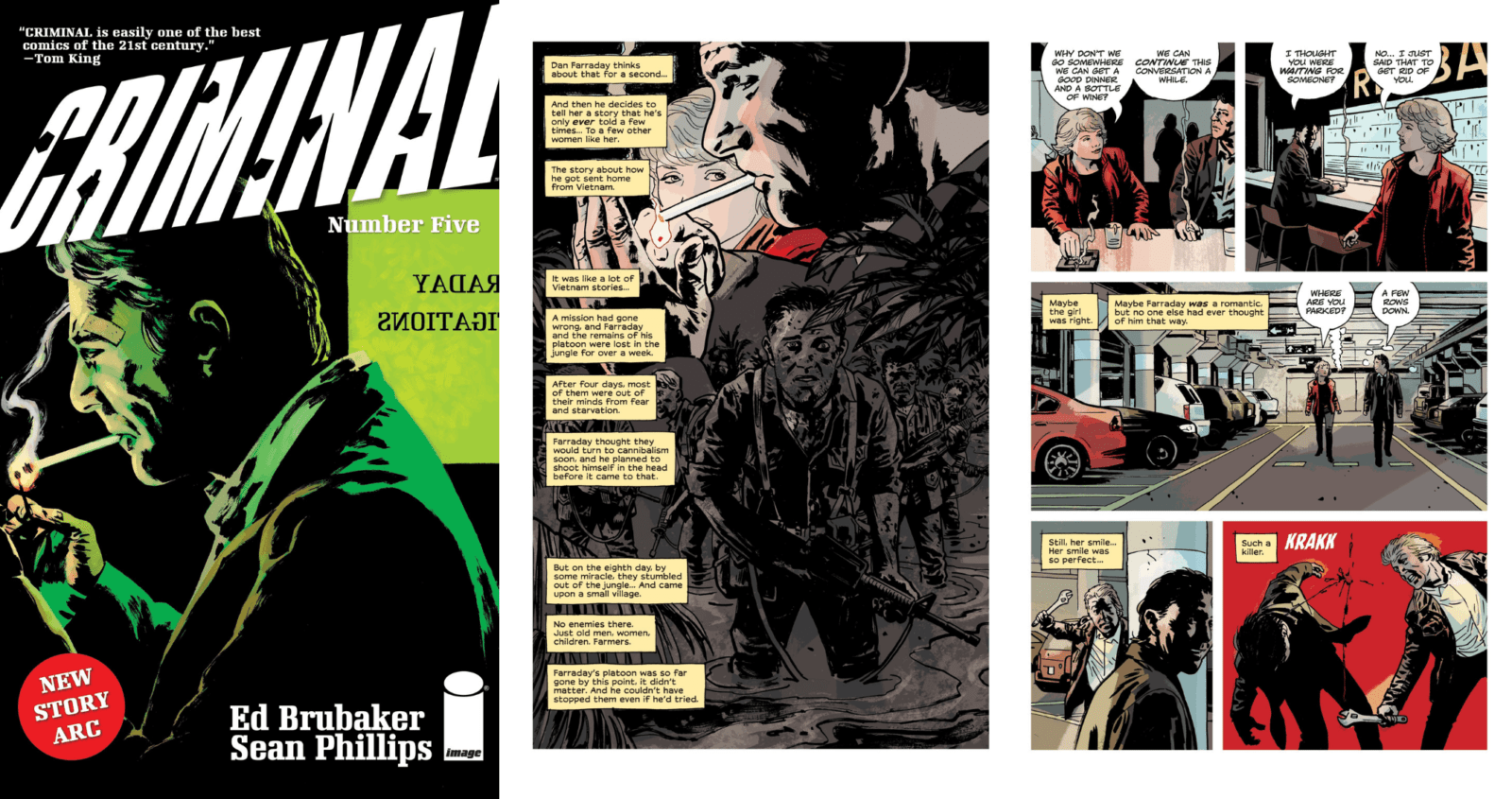 The number eight comic book on my list is the best issue released from DC Black Label thus far.

Scott Snyder and Greg Capullo wrote the last great run on Batman. They are the creative force behind the “Court of Owls” and mega-hit event Dark Knights: Metal. Batman: Last Knight on Earth Book One starts with a very youthful Bruce Wayne waking in Arkham Asylum. The famed mental institution is filled with workers who look very similar to Batman’s classic rogue’s gallery. Alfred tries to convince Bruce Batman isn’t real and it’s all in his head. He’s sees through it and puts the cowl on once again. Bruce discovers himself in a wasteland with Joker’s head in a future gone completely mad. Snyder and Capullo set the bar for future DC Black Label books through the roof with their excellent Batman: Last Knight on Earth Book One. 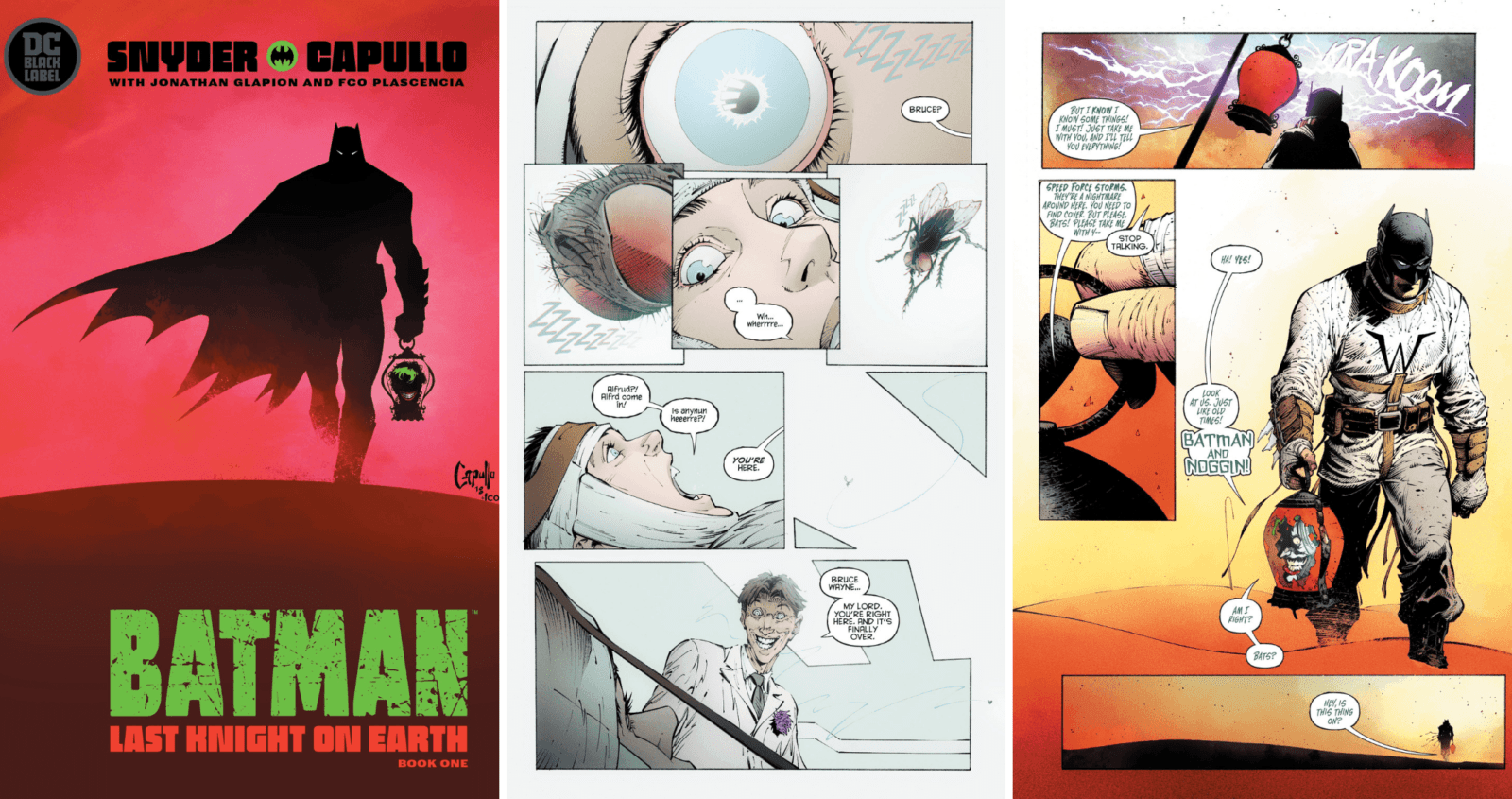 The number seven issue of 2019 is a prequel to one of the most successful films in the world in 2018.

Brian Hill is one of the best writing talents in the industry. He’s got a great feel for multiple genres but is at the top of his game with street level characters. It’s no surprise he aces the origin story of one the best MCU villains in years. Artist Juan Ferreyra is equally brilliant on the series. Erik Killmonger has been betrayed by the woman he wanted to be his queen. Killmonger is out for revenge and exacts it in terrific fashion. Finishing his transformation from brilliant student with a chip on his shoulder to full-fledged supervillain. Killmonger #5 is a fitting end to one of the best miniseries at Marvel Comics the past few years. Almost everything Bryan Hill writes is quality. Killmonger is his best work to date. 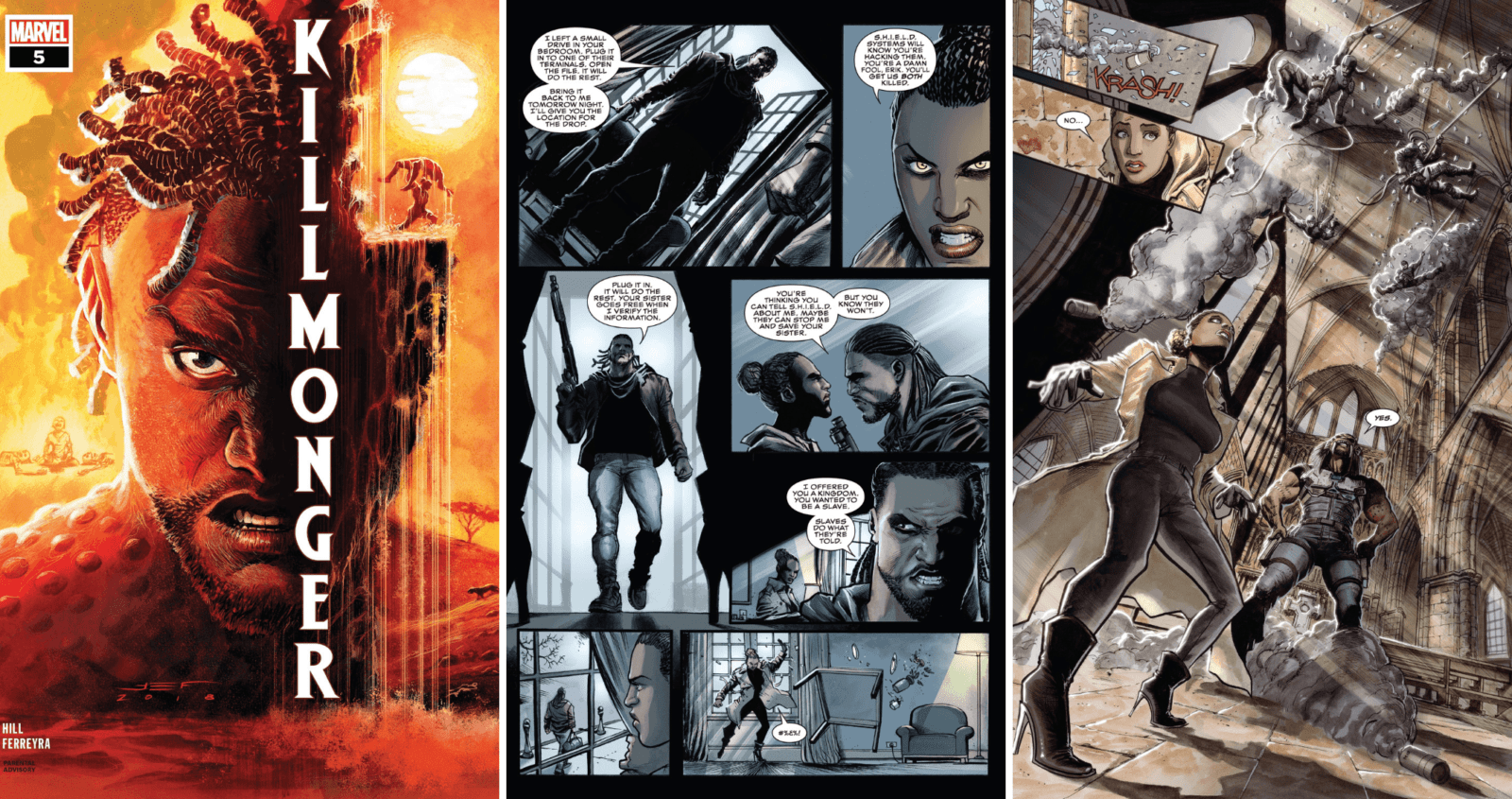 The sixth best comic issue of 2019 comes from the pages of the best Indie comic on the market today.

Die is also the best fantasy comic in the industry. Writer Kieron Gillen and artist Stephanie Hans form a dynamic creative duo.  Every issue of Die is excellent but so far issue 3 is the best. After a dragon attacks the band of friends main character Ash takes refuge in a bunker. Meeting several characters from their RPG. It turns out while the group have been away from the world of Die for 20 years the game characters are still dying on the front lines. The NPC’s have memories of families back home and long to return to them. It’s an incredibly well told story featuring the best visuals in the industry. Die #3 is a tremendous achievement from creative team Kieron Gillen and Stephanie Hans. 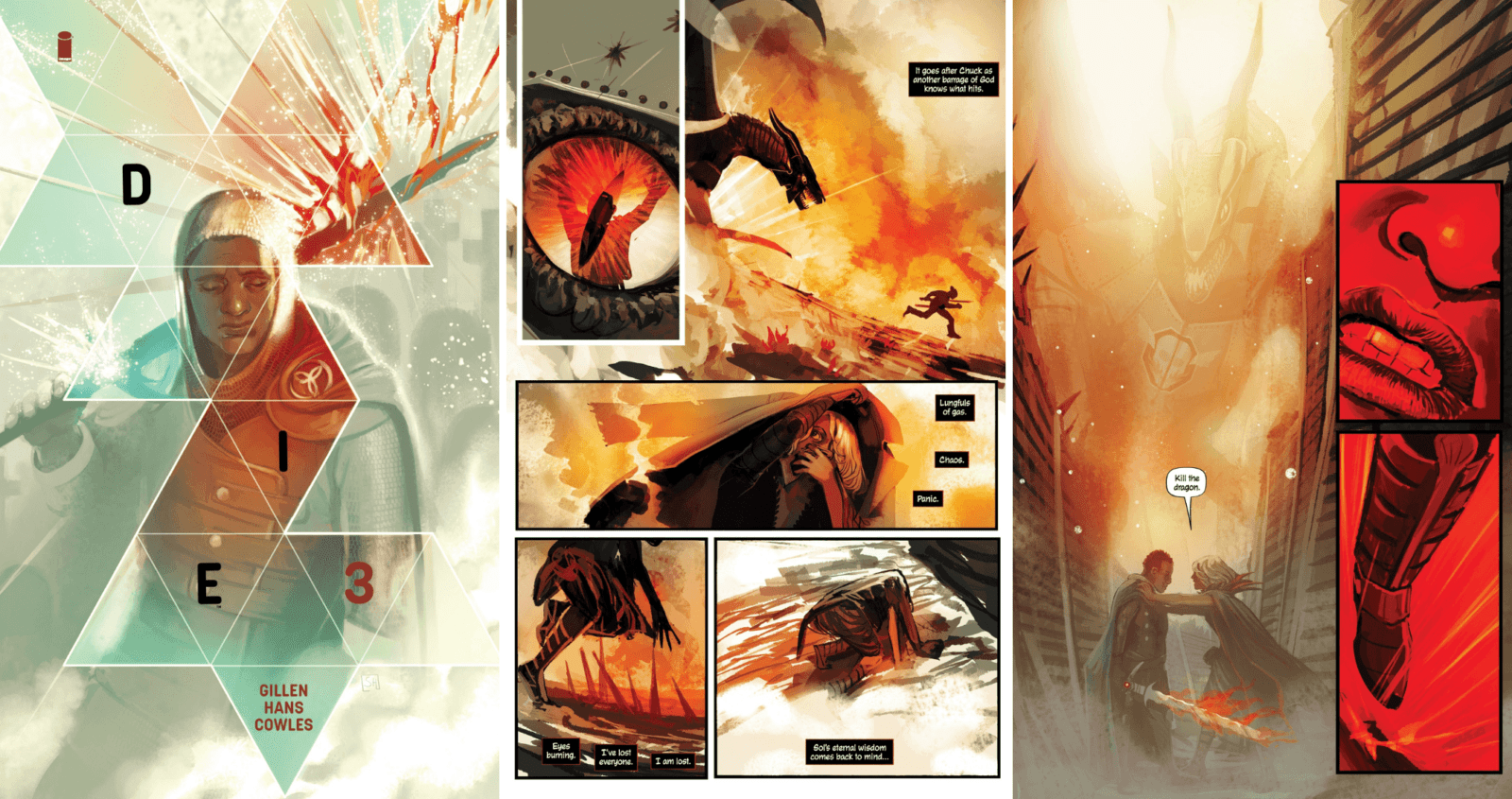 Coming in at number five is a comic featuring a classic character who just returned to Marvel Comics.

Conan has been severely overexposed at Marvel since returning to the publisher in 2019. The five issue Savage Sword of Conan run from Gerry Duggan and Ron Garney is easily the best Conan story so far. Issue one is the perfect reintroduction to the character. The future King survives on raw shark meat before being taken by slavers. Fellow captive Suty, who’s hoping to be set free and join the ship’s crew, nurses him back to health. The slaver Captain is in possession of a very valuable artifact and the famous thief isn’t long for captivity. Duggan’s limited, yet effective, dialogue and Garney’s splendid art capture the feel of the defiant barbarian impeccably. Savage Sword of Conan #1 is the perfect start of a new high stakes adventure for the timeless character. 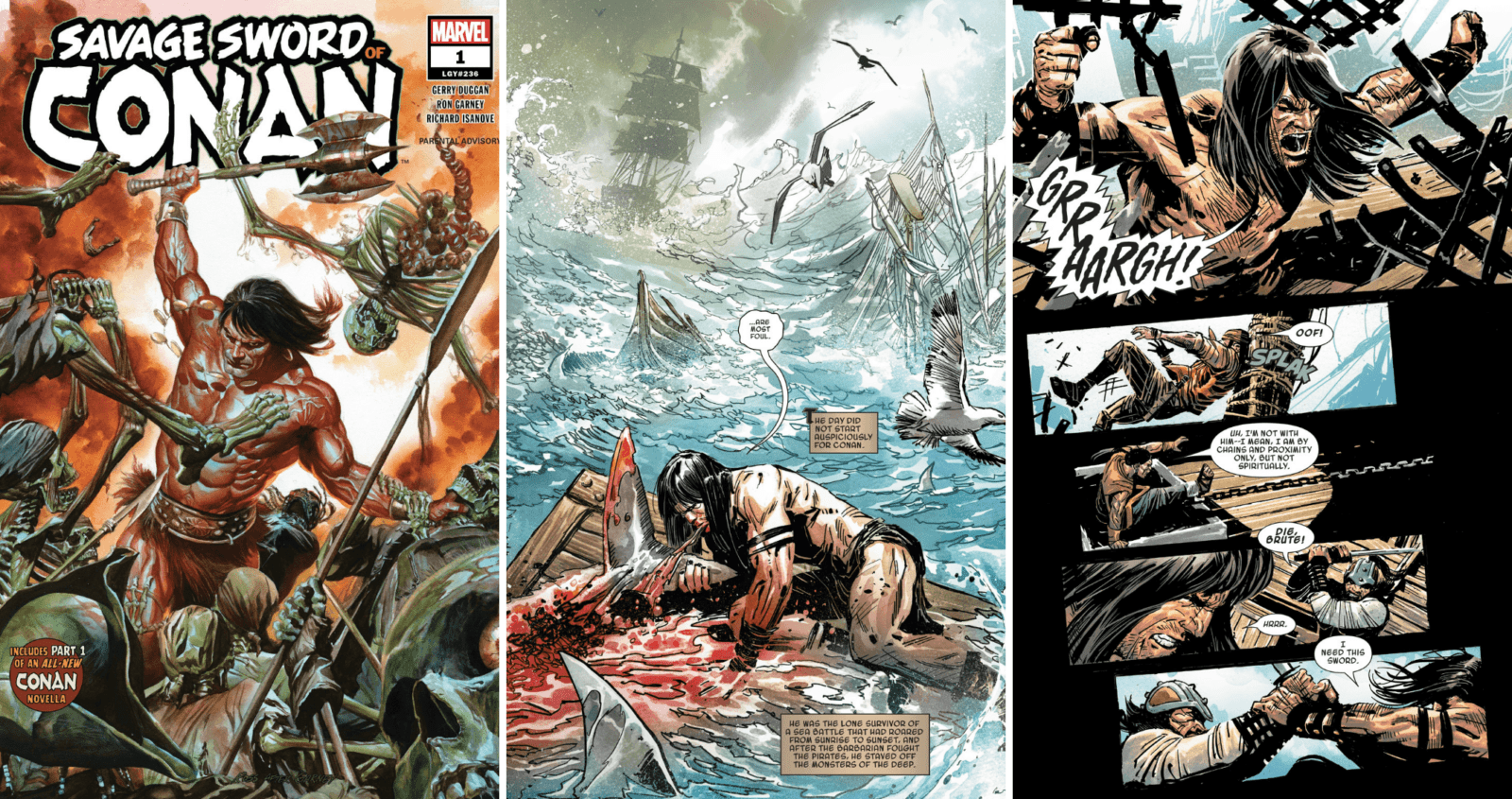 My number four comic issue comes from the pages of not only the best horror comic in the industry, but the best comic series period.

Immortal Hulk is the hottest series in comic books today. Al Ewing and artist Joe Bennett revitalized the long suffering character with a return to its horror roots. In issue 18 Joe Fixit returns, using Bruce Banners body to reestablish his Reno roots. Meanwhile, reporter Jackie McGee investigates Hulk and Betty Ross’ disappearance. Discovering a new red version of Harpy. The US military sets a new Abomination loose to track down Banner. The issue crescendos to the first confrontation between Hulk and Abomination in the pages of Immortal Hulk. Immortal Hulk #18 is the culmination of 12 months of intense storytelling from Al Ewing and Joe Bennett. 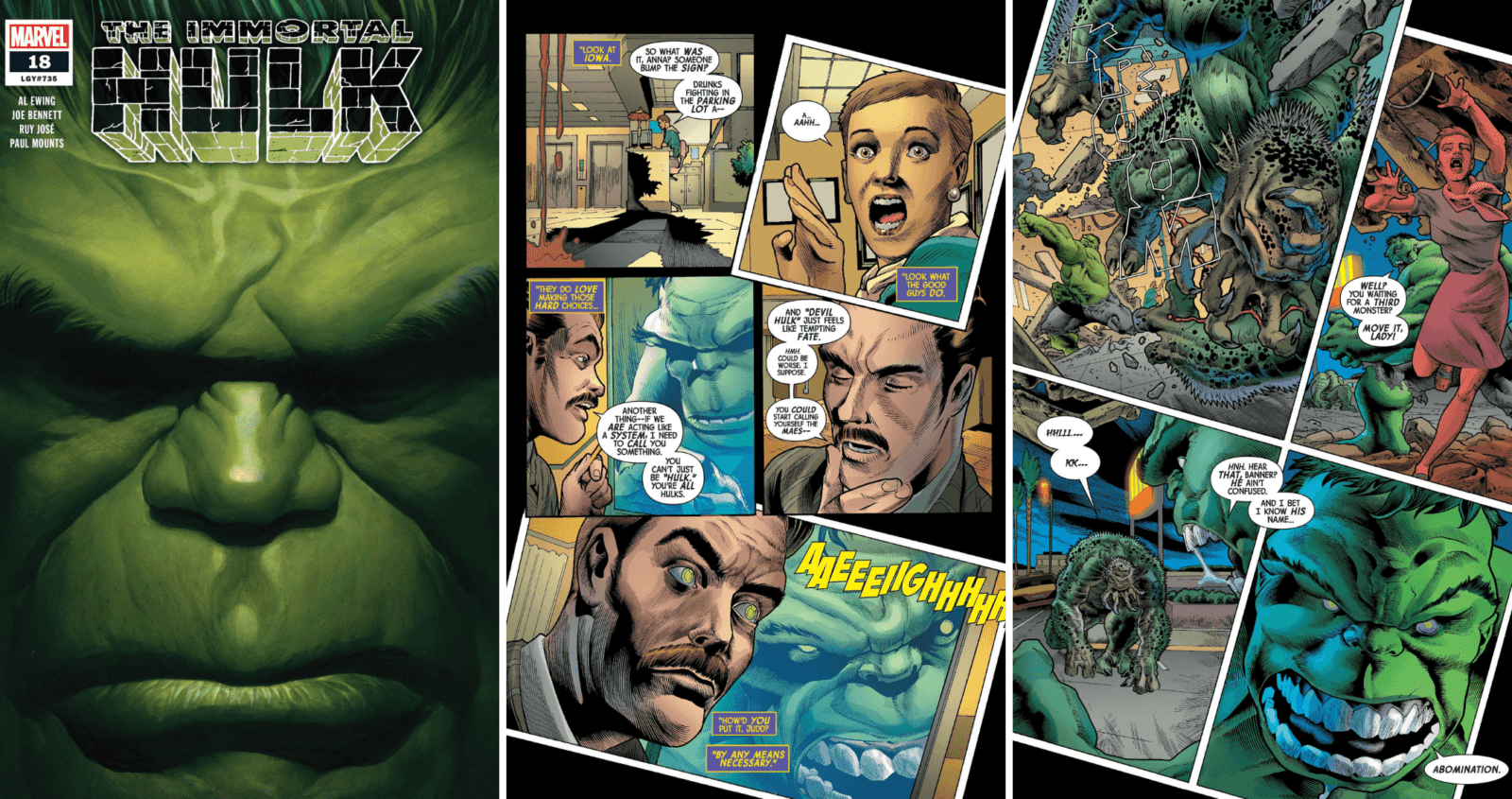 Robert Venditti is my personal favorite writer in the entire comic industry. He crafts the third best comic issue of 2019.

Venditti and artist Bryan Hitch took Hawkman to heights never before seen in 2019. Robert Venditti masterfully ties the characters history together in an extremely satisfying story. This all climaxes in Hawkman #12, Hitch’s finale on the series. The Deathbringer army Carter Hall once commanded arrives at Earth. Hawkman calls upon a legion of Hawkmen who battle for the fate of humanity over London. It’s an extremely thrilling, emotional issue that completes one of the finest story arcs in recent comic history. The series features many great moments during the first 12 issues. Hawkman #12 is the perfect ending to a nearly flawless re-imagining of Carter Hall, while staying true to the character and his 80 year history. 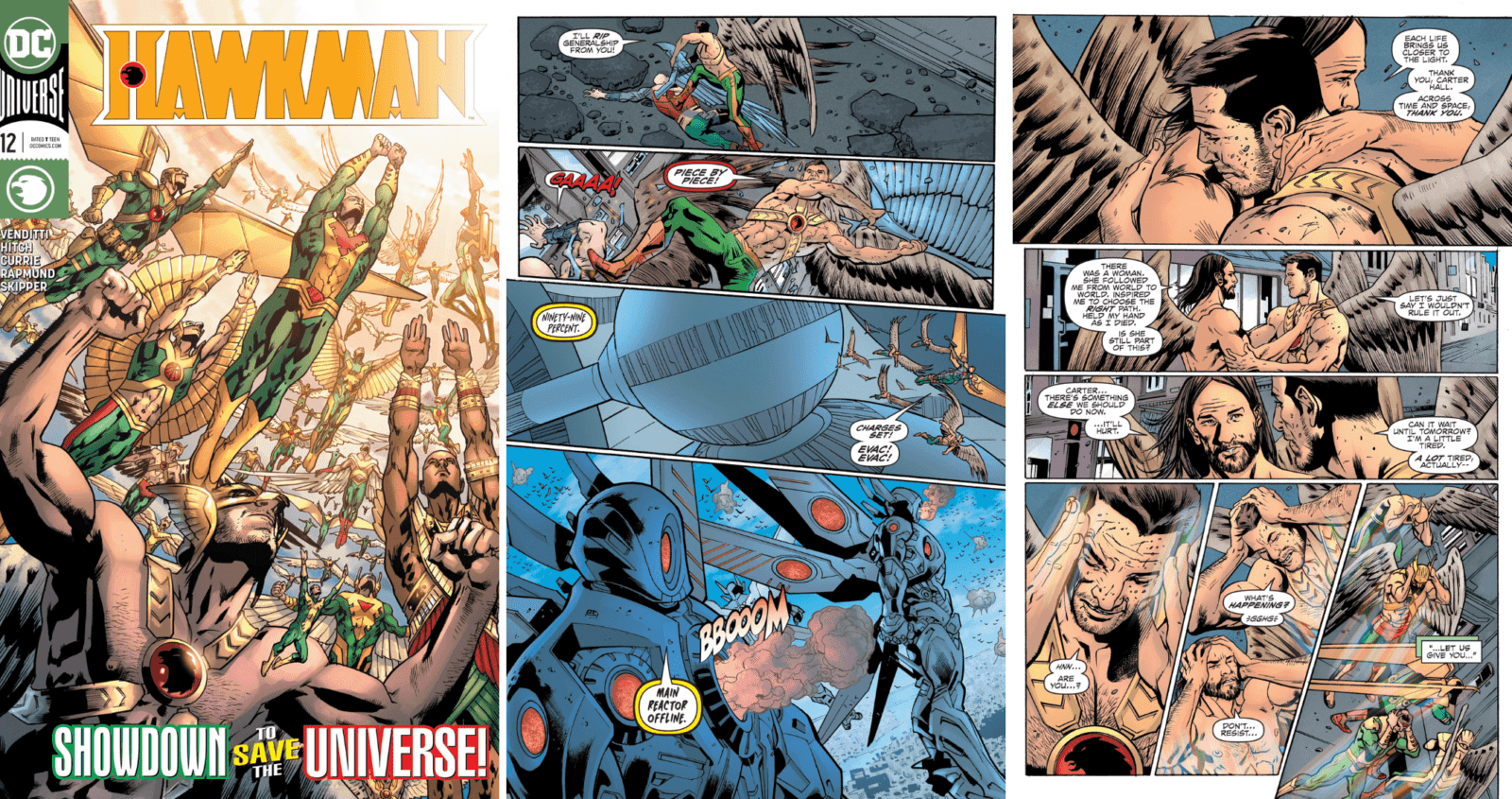 The second best comic book issue of 2019 is penned by the hottest writer in comics today, Chip Zdarsky.

When Marvel announced Chip Zdarsky and Marco Checchetto were joining forces on the new Daredevil series readers were very excited. The results have been better than anyone could expect. Issue five is the conclusion of their first story arc on the series. Daredevil is suffering a tremendous amount of discomfort and patrolling the streets on pain killers. He’s haunted by the death of a criminal that’s looking more and more like his doing. The Defenders provide back-up aid and take him back to his apartment to recuperate. The story’s apex arrives with a heart-to-heart between the New York based superheroes Spider-Man and Daredevil. Zdarsky and Checchetto had an amazing start to their new Daredevil series. No issue was better or more powerful than Daredevil #5. 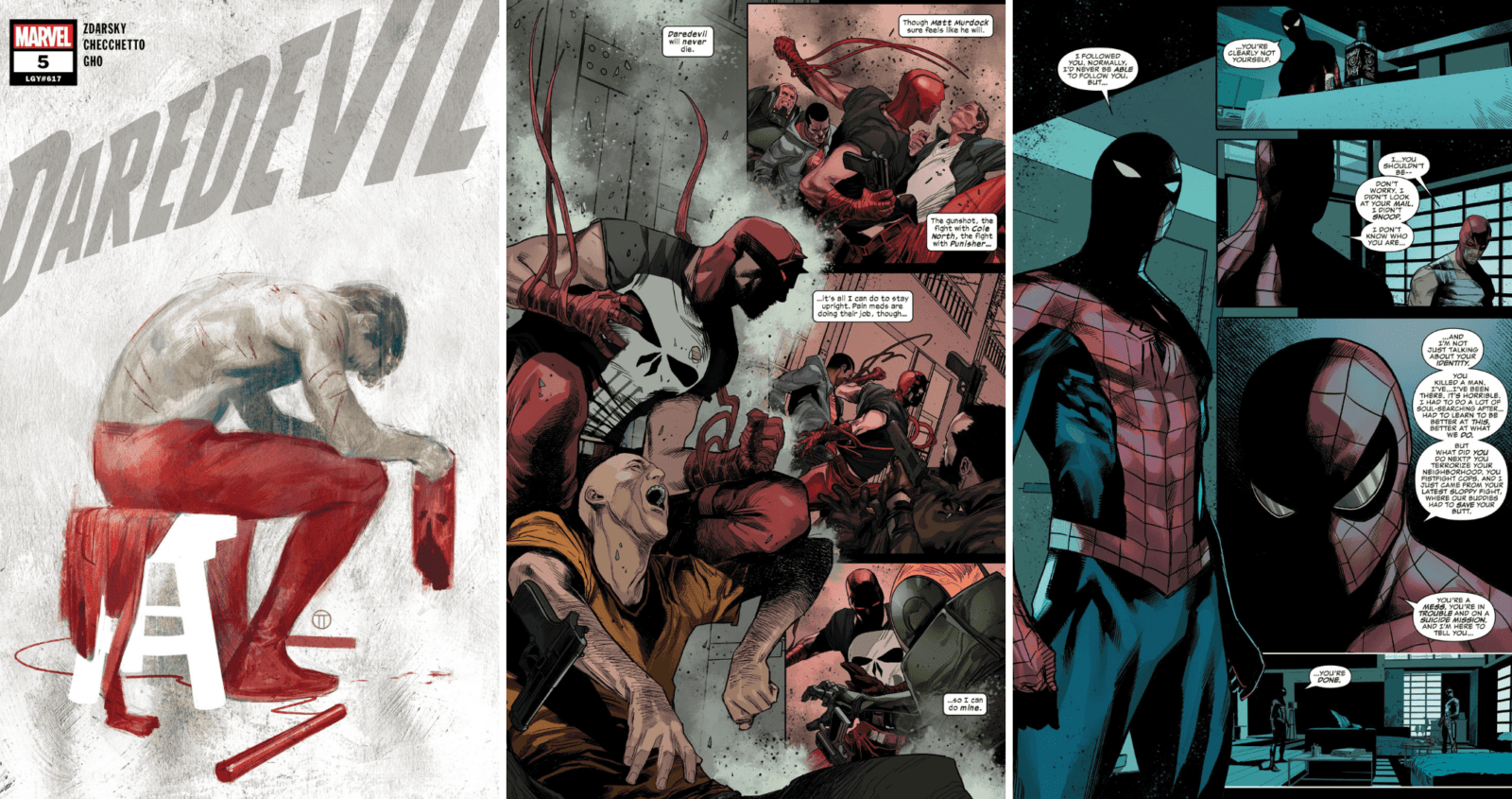 The competition for best comic issue of 2019 is very fierce. My choice for number one was written and illustrated in the mid-2000’s but wasn’t released until 2019.

Marv Wolfman started writing the story, originally intended for publication in Superman: Confidential, in 2006. The series was cancelled before the four issue arc was printed. It sat fully completed for a decade. Wolfman crafts a wonderful Superman story. Claudio Castellini’s art has a terrific vintage look without feeling dated. The book introduces Clark Kent before becoming the world’s greatest superhero. His powers make him highly capable but he’s not a competent hero yet. Clark makes many mistakes along the way and feels ashamed to tell his parents about his current struggles. It’s a brilliant tale of self-discovery and perseverance. Man and Superman #1 deserves a place in the discussion as the best origin story ever for Clark Kent and Superman. It’s the best comic issue of 2019 so far. 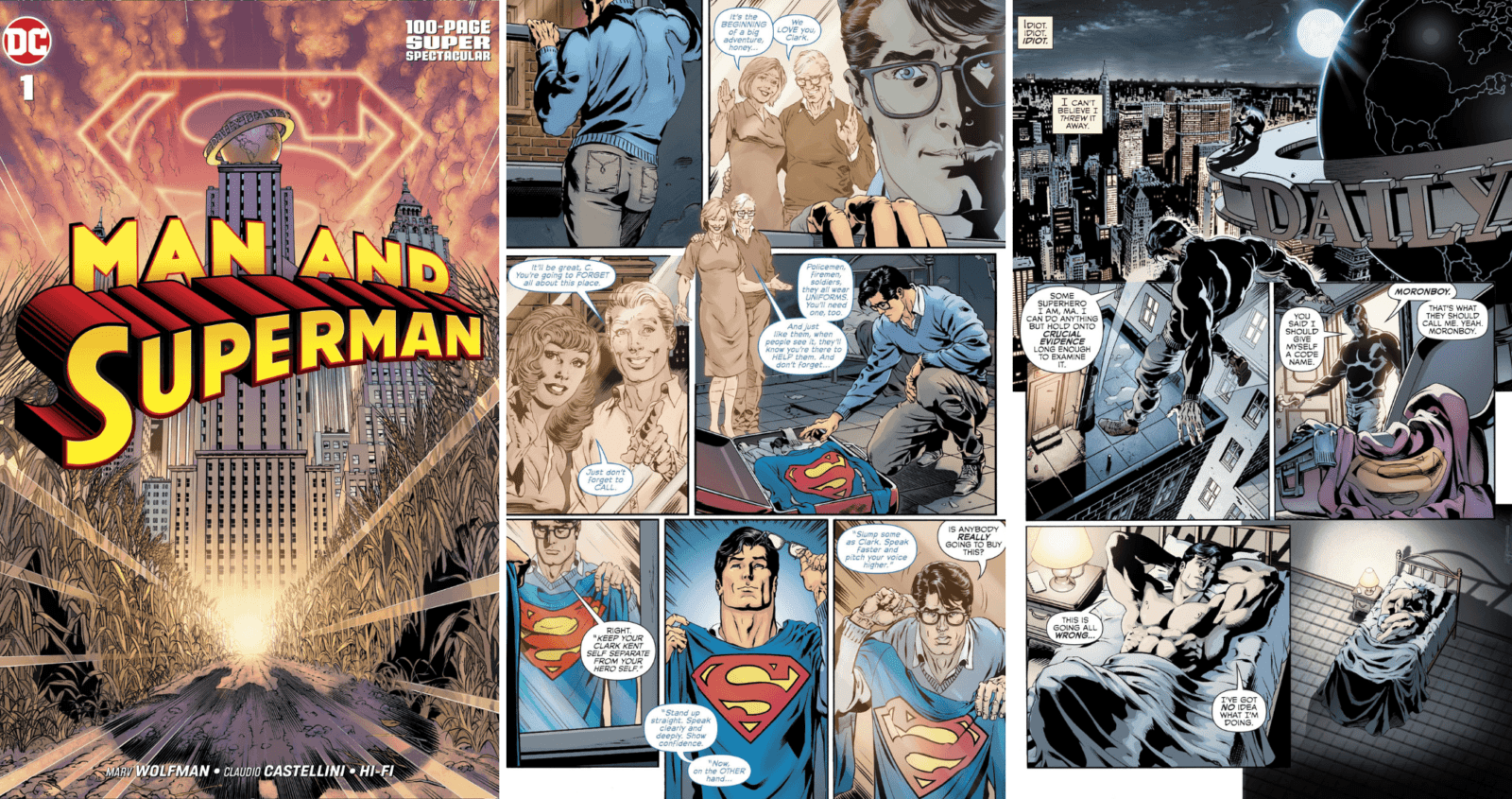 There’s plenty of time for new, exciting comic book issues to emerge in 2019. If the first half of the year is any indication, comic book readers can look forward to many great new stories in the months ahead. Hawkman #12, Daredevil #5 and Man and Superman #1 set the bar for excellence very high.  I for one can’t wait to see which creators and series challenge them for the top spot by the end of the year.

For a more in-depth look at the 10 best comics of 2019 please view my video below. And further down, our panel of experts, The Comics Aficionados and I also recently debated our Best of Comics 2019 live on my Youtube channel. Check out the replay to find out our picks for; Best Comic Series, Best Writer, Best Artist, Best Story Arc, Best Publisher and more!

And here is our live chat with the Comic Aficionados. We’re live discussing the comics industry every Saturday at 10 am EST.