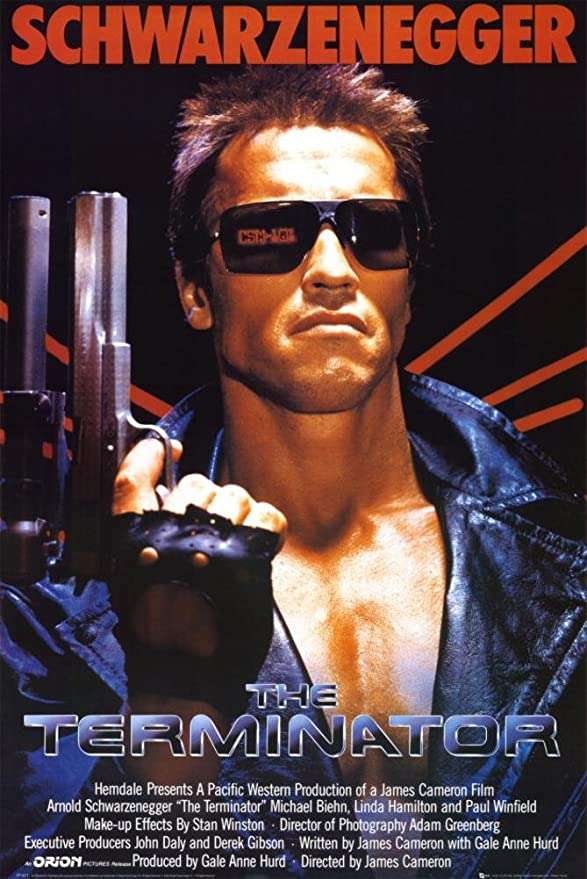 #2 in my ranking of the Terminator franchise.

This is a testament to the power of craft in building a movie. Made inexpensively but never feeling cheap, James Cameron’s first full directing credit (he worked a grand four production days on his first credited directing job, Piranha II: The Spawning) has the kind of polish one might expect from someone several movies deep. There’s an assuredness to the filmmaking and storytelling while managing to feel surprisingly unconventional and working exceedingly well at the same time.

There isn’t a single line of expository dialogue for the first forty minutes. It’s all tension building as we watch two men appear out of nowhere, steal clothes, acquire weapons, and make their way towards one Sarah Conner. These two men don’t talk at all about who they are or what they want, but we get to watch as the two make their motives clear through action. The big hulking guy punches a punk through the stomach, steals clothes, and guns down a gun shop owner. The smaller guy steals pants off of a hobo, shoes and a jacket from a store, and a pair of guns from police officers without hurting them. One seems less bad than the other, but both end up just at the edge of Sarah Conner’s frame without a clear indication of what they want from this ordinary girl. 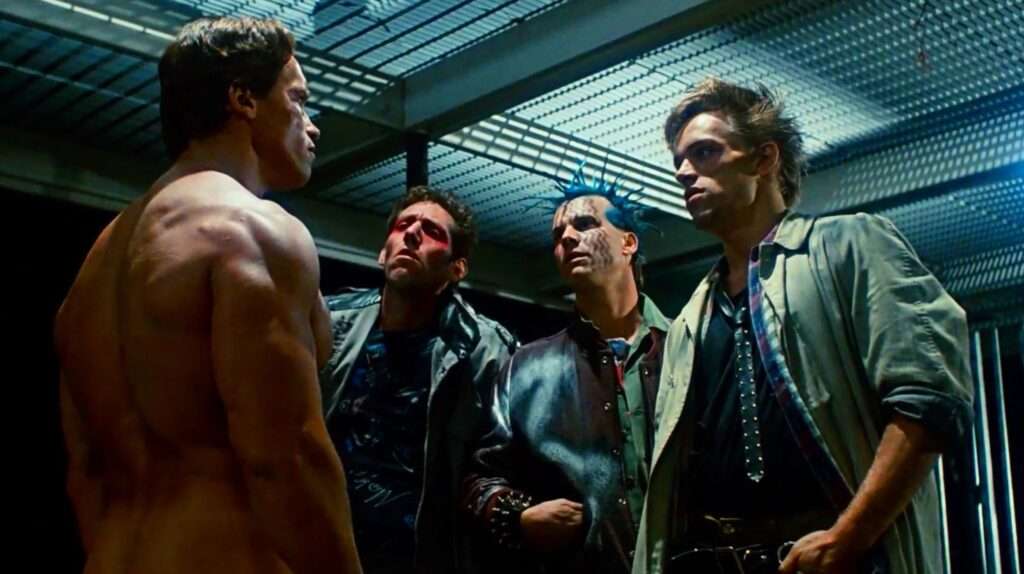 One of the interesting things about Sarah is that she is so strikingly ordinary. She’s not that pretty. She’s a waitress in a diner. She gets stood up by her date on a Friday night. She has no special skills or special knowledge, and the movie makes no effort to build her up as special this way. She’s special for something that will happen in the future, and that ends up making her rather helpless in the present. She’s not a badass, but she does need to learn to fight as much as she can over the course of a day, and it ends up just enough to survive. 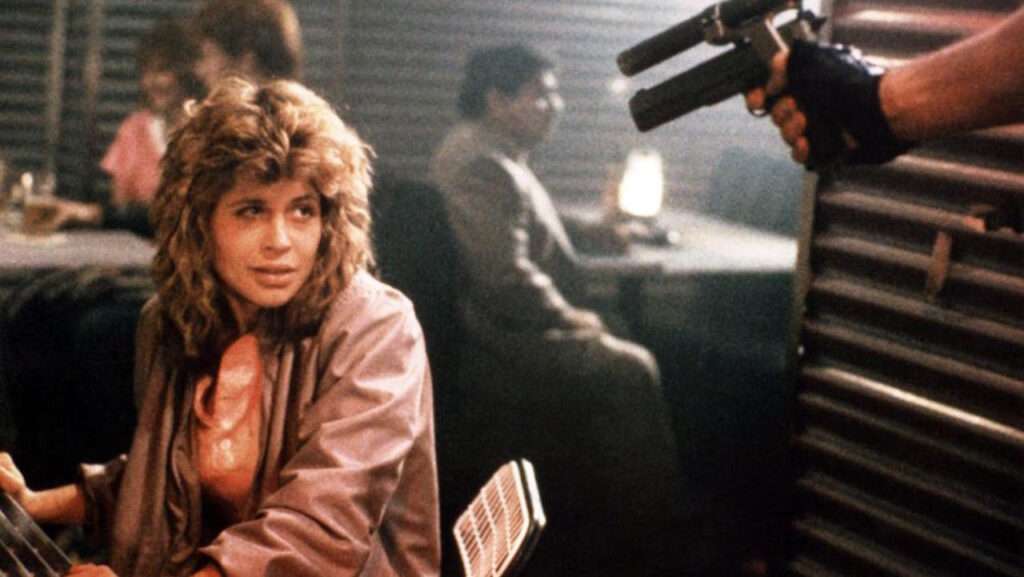 When Kyle Reese, the smaller one, finally catches up to Sarah, fighting off the big one, the Terminator, briefly, and the two run away from the scene together, we finally get our first smattering of exposition, again, more than forty minutes into the movie. I cannot express how much I love that the movie’s entire first act goes by without explicit explanation. Cameron respects his audience enough to know follow along, but he also uses the lack of explanation as a source of tension, quieting the soundtrack down to largely ambient noise with the simple score by Brad Fiedel acting almost like a metronome in a similar way that Hans Zimmer’s score felt like a watch in Dunkirk. 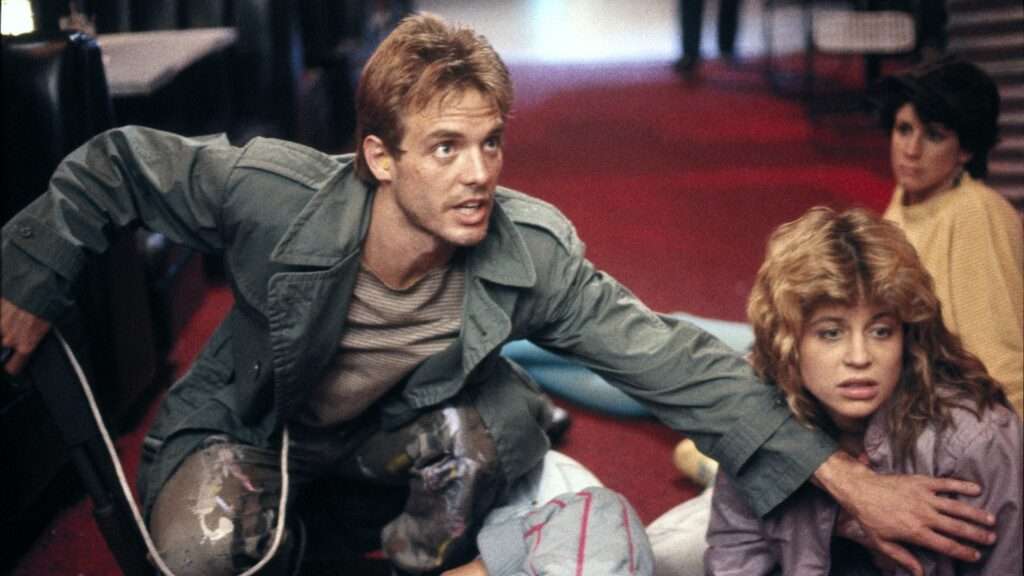 The exposition dump is fine, as it is, broken up over several scenes as Reese explains to Sarah and then the police the state of the future. Breaking it up over a chase and an interrogation helps keep it from feeling quite so monotonous, and Michael Biehn gives it his all explaining the inexplicable to people who don’t want to listen. Cameron flexes his action filmmaking muscles with the attack on the police station, a dark and dangerous feeling sequence where Reese and Sarah get out alive, and then the movie loses something. 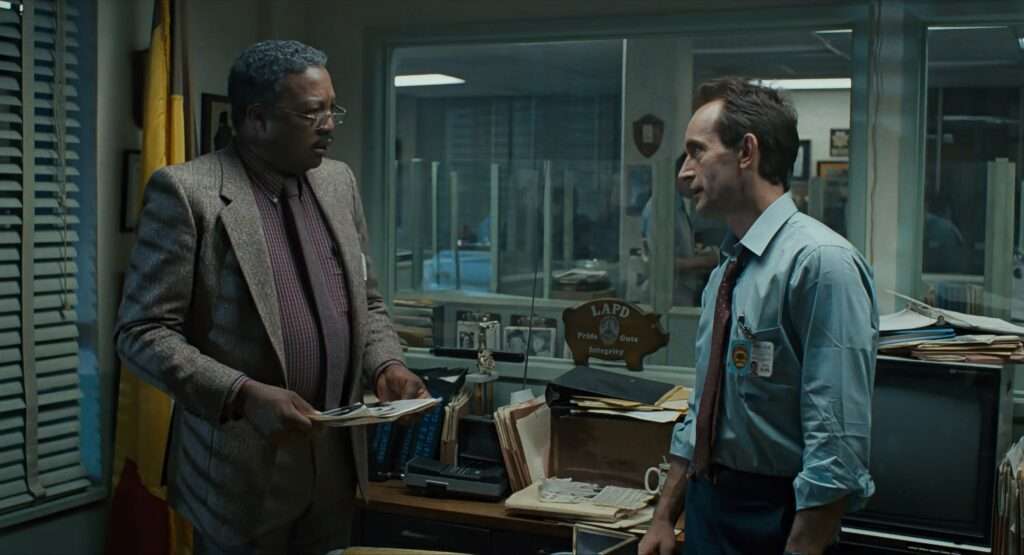 There’s a wonderful irony at play in how The Terminator is constructed, that Reese got sent back in time by John Conner, his own son, and Reese didn’t know it. However, because the action of the film takes place over the course of about a single day and Reese has to die in the end, that doesn’t leave a whole lot of time for real emotional connection between Reese and Sarah. His side makes sense. In the future, he had Sarah’s picture and grew to love her as an icon, the mother of humanity’s savior, and an image. However, the feeling that she falls madly in love with him so quickly isn’t handled all that convincingly. It feels more like a chemical thing brought on by adrenaline than anything else. More importantly, I think, is that the movie slows down incredibly to make this reasonably unconvincing display occur. 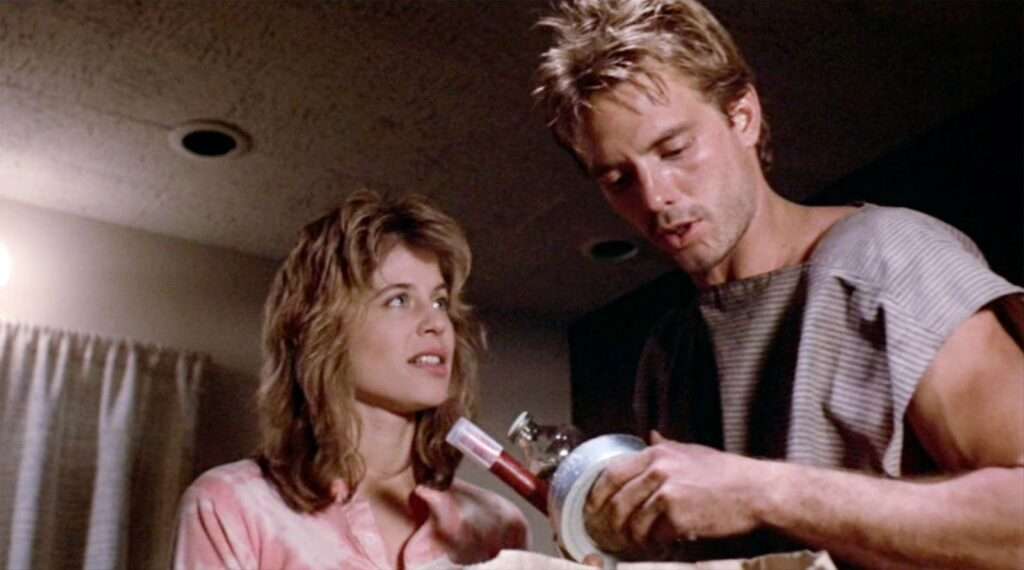 For more than the movie’s first hour, it’s been a tense thrill ride with little sign of ever letting up. Then the two get away and everything just comes to a stop. There’s no real tension left for a solid twenty minutes. I don’t know if Cameron didn’t trust his audience to stay with him on such a sustained thrill ride or if he just didn’t know how to tell a love story that well, but the movie just doesn’t feel quite right until the Terminator tracks the two down at their out of the way motel when it picks back up and becomes the movie we’d grown to love again. 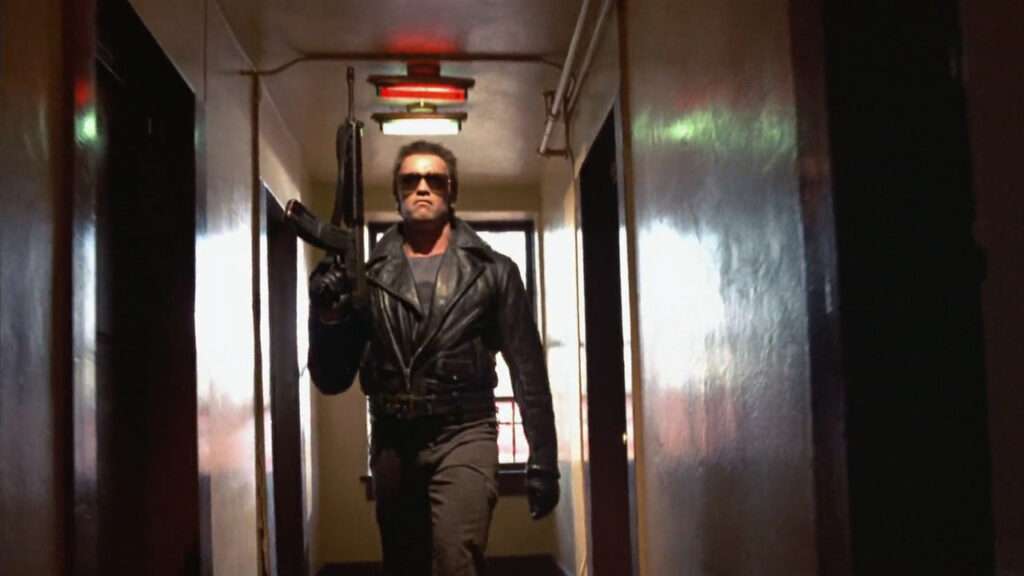 The final action beats are well done, stepping fully into monster horror territory with an antagonist that just won’t go down until he’s squashed by a hydraulic press. And this sequence is a very good microcosm of what I mean by inexpensive but never cheap. Cameron understood the limits of his budget, having made a short career in special effects up until this point. He throws every tool he has at the screen from models to puppets to stop motion to miniatures to just outright blowing stuff up, and it cuts together amazingly well to produce a cohesive experience. 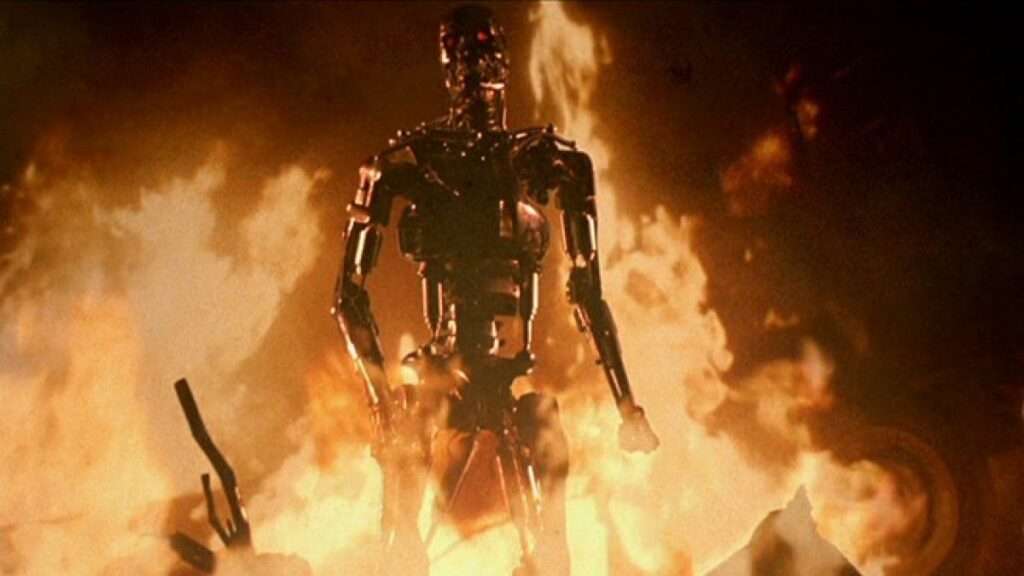 Now, there is one element of the production that feels cheap, and that’s the score. It’s not bad, but it feels like the entire thing was done on a synthesizer in a few days, which it probably was because Cameron had blown through his entire budget by the time it came to score the film. However, it works, and that’s really all that’s important.

Linda Hamilton is fine as Sarah, playing a naïve waif turning into a somewhat confident woman fairly well. Michael Biehn gives it his all as Reese, imbuing the character with a lot of energy, passion, and exhaustion all at the same time. Arnold is a presence as the Terminator. My favorites, though, are Lance Henrikson (who was originally going to be the Terminator) and Paul Winfield as the two chief police officers, playing off of each other with enough character and energy to make them feel like far more than just movie cops. 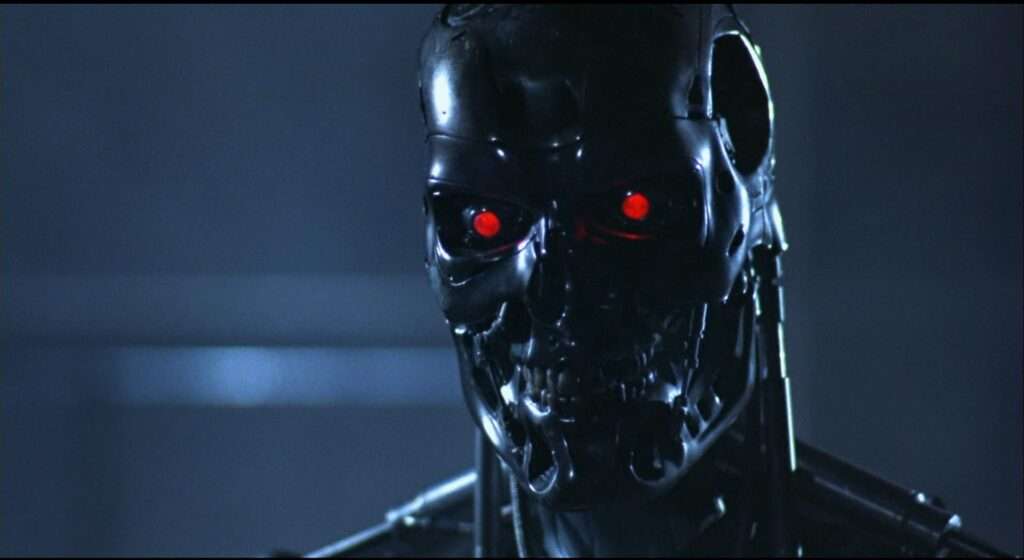 It’s not perfect, but the film is a statement from a hungry, young, and impoverished director that he knew what he was doing and he could be trusted to create an engaging, energetic, and well-produced action spectacular.