#7 in my ranking of the theatrically released Superman films.

I have had an issue with Richard Donner’s 1978 Superman for a while. I’ve never watched it particularly critically until now, and now it seems pretty clear to me why I simply can’t get into the whole exercise. I like parts of it quite a bit, but overall this is a hodgepodge of a film. It represents so much of what is wrong with origin stories in superhero films, and yet the spirit is so innocent and guileless that it’s hard to actively dislike.

I have to say that I kind of love the first forty-five minutes of the film. From the introduction of Krypton through its destruction and up until the young Clark Kent builds the Fortress of Solitude, Richard Donner approaches the material in a surprisingly sober and serious manner that feels almost mythic. Krypton is weirdly alien with its white crystalline structure, hoop jail cells, and glass pane prisons is so different that I just want more of it. Jor-El (Marlon Brando), after having sentenced three criminals to an eternity in the Phantom Zone, warns his fellow leaders of the planet that Krypton is about to explode. They don’t believe him, so he sends his newborn son in a crystal powered spacecraft towards Earth, where little Kal-El will be stronger than any human and have abilities that no human will be able to match.

After a three-year journey, the baby crashes in Kansas near the elderly and childless couple Jonathan (Glenn Ford) and Martha Kent (Phyllis Thaxter) who adopt the alien baby as their own. Skipping ahead when the adopted Clark (Jeff East) is in high school, he’s frustrated by the bounds on his existence to keep his abilities secret. This is the best filmed stuff in the whole movie, pulling the camera back to get an epic, Americana sweep to the scenes that recalls John Ford. My only complaint is that I want more of it. A lot more. I want this stuff to be the whole movie. If you’re going to do an origin story, go all out and set everything in Smallville and film it like John Ford made it.

The action moves to the arctic north where Clark builds the Fortress of Solitude, and the film gets outright surrealist for a bit while the spirit of Jor-El introduces himself to Kal-El and teaches him for twelve years. It’s an interesting pivot point, ending with Christopher Reeve taking on the mantle of Superman, and the movie pretty much instantly loses me once we get to Metropolis. The more somber feel of the first act falls away instantly for a completely different tone, a jokily comical one. There’s a heavy clash between Clark mourning the death of his adoptive father, learning his true heritage, and learning the secrets of the cosmos in order to become Superman followed by Ned Beatty as Otis waltzing around the streets of Metropolis, stealing pretzels from blind shop owners, getting caught, and chased merrily by two police officers.

And the tone is only part of why I can’t quite embrace the last two-thirds nearly as much as I embrace the first third. The film essentially starts over. If you cut out the first third of the film, you’d have a 90-minute film about some light adventure elements of Superman’s first exposure to the world followed by the sudden introduction of a criminal mastermind’s plot to increase property values for himself. From a pure plot perspective, nothing of the first forty-five minutes informs what comes later. There’s some smaller thematic stuff, especially in relation to Superman’s big moment at the end of the film, but it feels small compared to how I imagine a two-and-a-half-hour origin film of Superman would go. Anyway, Clark moves to Metropolis and becomes a reporter for the Daily Planet under Perry White (Jackie Cooper), editor, and working alongside Lois Lane (Margot Kidder), star reporter. Clark is a befuddled weakling who gives into robbers on the street in an effort to allow him to live in the open while he makes his real self, Superman, obvious to the world. She’s a reporter working the city beat, and Superman becomes her mission when he reveals himself by stopping a series of crimes across the city. Now, let me make it known that I’m not a complete curmudgeon. This sequence of Superman flying around and roping criminals and even saving a cat from a tree is one of my favorites of the film. It doesn’t have any sort of epic feel to it, but it’s an enjoyable introduction to the superhero and his personality of a complete boy scout. My problem is that it doesn’t really feed into Lex Luthor’s (Gene Hackman) plan. 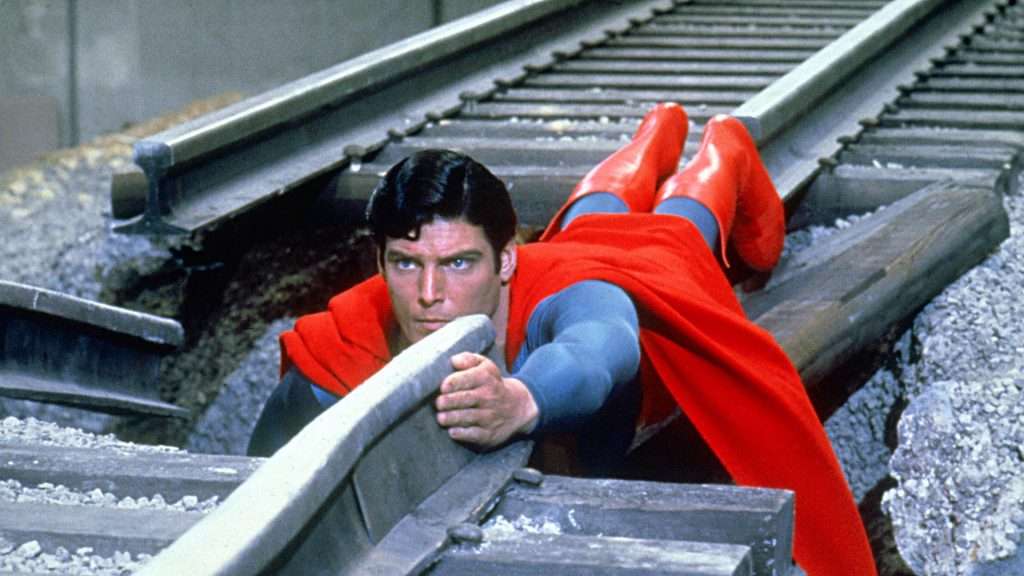 Really, this film feels like three in one. The first was the origin of Superman getting to his costume. The second was the origin of Superman’s public image. The third is the supervillain plot, and it’s the fact that all three feel so distinct from each other that is the source of my issue with the film. The first doesn’t flow into the second, and the second doesn’t flow into the third. I think this is most obvious in the use of Lois Lane. In her introduction, she’s doing stories about rapes and murders in Metropolis. When the villain plan to redirect two nuclear missiles to attack the San Andreas fault line and sink California into the sea, Lois Lane is suddenly doing a story in the west about an unknown person buying up land in the desert at inflated prices. A better script would have had her on an early form of this story at her introduction, something centered in Metropolis that leads her to looking out west for answers. Instead, she just suddenly in the west where the bomb is going to put her in peril. Oh, and so is Jimmy Olsen (Marc McClure) who is taking pictures of the Hoover Dam for…reasons. It feels so random. 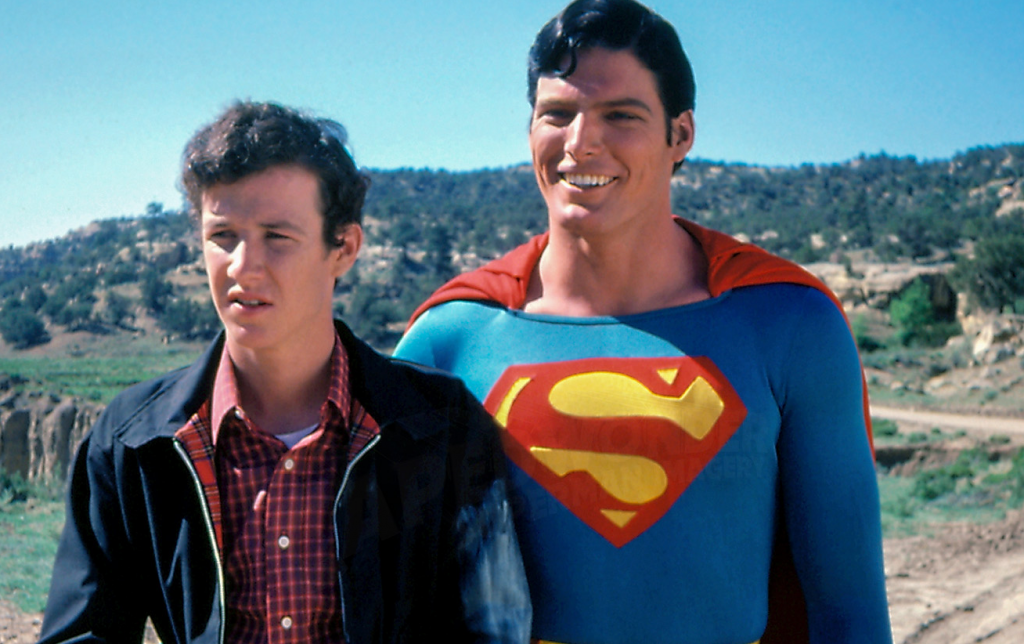 Luthor’s plan I don’t have a problem with. It’s different. It’s dastardly. It’s a challenge for Superman to overcome. I like it. What I don’t like is how goofy the implementation has to be. Luthor has a hanging lantern moment when he questions out loud how the greatest criminal mastermind in the world has an imbecile working for him in Otis, and yet it doesn’t explain it at all. Otis is comic relief, but when dealing with the redirection of nuclear missiles to kill tens of millions of people, I’m not sure we need the moments where Otis gets coordinates wrong in a comedy bit. Where I felt like Donner was approaching silly material right in the beginning, I felt like he was approaching it all wrong by the end. 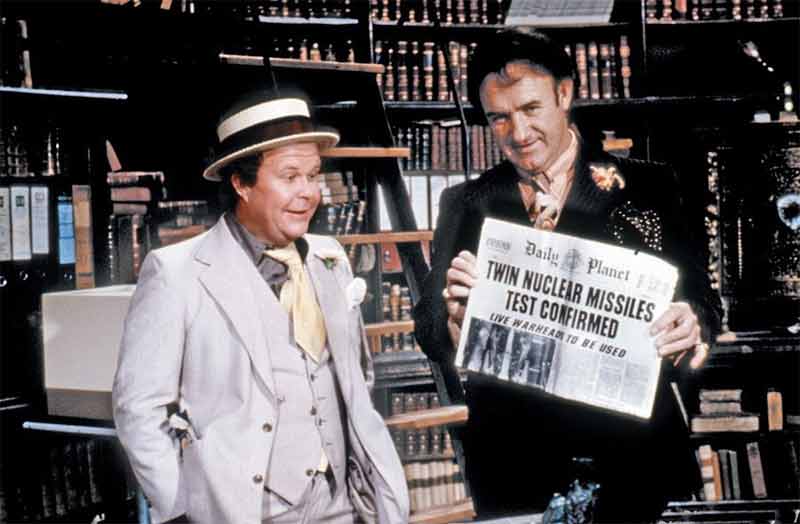 And then the missiles go off, but…ugh…Luthor explains everything to Superman. Would he have known anything until it was too late if Luthor hadn’t told him? It’s unclear. Maybe not the worst assumption on his part, and he gets the goods on Superman by…ugh…easily finding Kryptonite that he somehow knows is Superman’s only weakness and somehow flew all the way to Earth from Krypton’s explosion. Whatever. And then, with Superman weakened and nearly drowning, Luthor simply leaves, giving Ms. Teschmacher (Valerie Perrine) time to save him. This is all kinds of the wrong silly.

And then…ugh…the time travel. Time travel is dumb most of the time, especially when it’s being used to fix things like this. Lois Lane dies in the earthquakes, and Superman is so broken up about this woman he’s known for a few days, that he betrays his father’s mandate and “interferes with human history” by spinning around the Earth so fast that it reverse time and then…it’s unclear what he does to fix everything, but Lois is saved. Hurray, I guess. 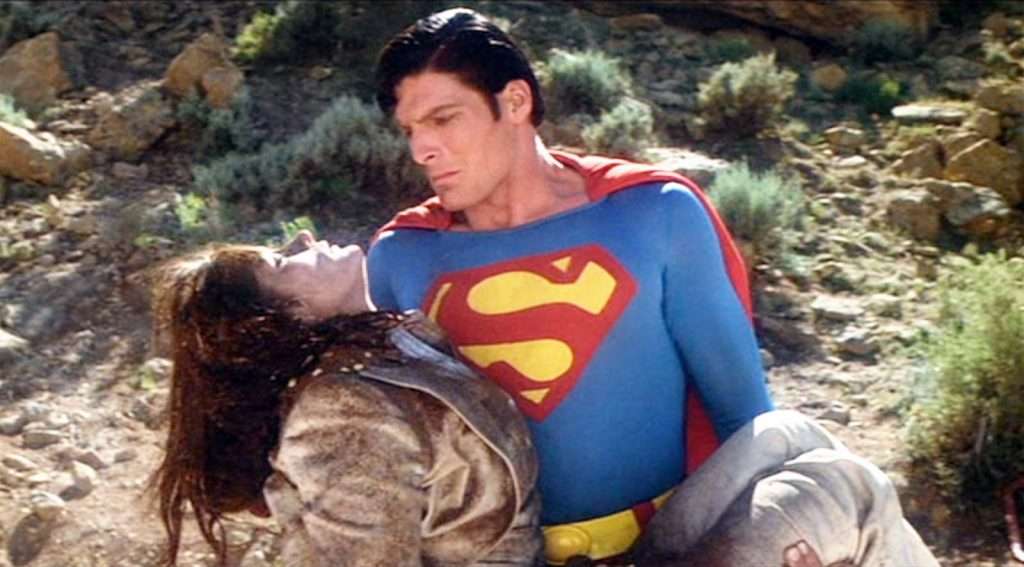 I’m going to be honest. Superman is a mess. It’s not good. However, I do really enjoy parts of it. The first forty-five minutes is a weird kind of magical. The introduction of Superman to the world is fun and light. The special effects are pretty uniformly good. Christopher Reeve was rather perfectly cast as Superman, and Gene Hackman is fun as Luthor. However, the story is a jumble to the point of near incomprehensibility. There’s no consistent build up of anything from theme to plot to character to allow a nice progress from beginning to end to bring it all together. Instead, it feels like three television episodes stitched together.

I was honestly ready to love this movie after years of not seeing it, happy to leave behind the bad taste from my last viewing. However, I just couldn’t get into it after a certain point.