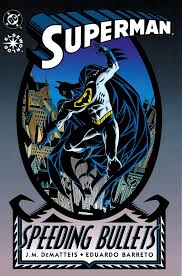 Superman: Speeding Bullets is a DC Comics Elseworlds prestige format one-shot comic book published in 1993 written by J.M. DeMatteis featuring artwork by Eduardo Barreto. The comic book is based on the concept of an amalgamation of Superman and Batman.

It supposes a story of “What if Kal-El landed in Gotham instead of Kansas?”

“What if he was found by the Wayne’s instead of the Kents?”

In other words…what if Kal-El became Batman?!

A very interesting idea that could be easily botched and, for the most part, it wasn’t…except for the ending.

But what can one expect when J.M. DeMatteis and Eduardo Barreto only had 48 pages in which to work…but that being said, is it good?

Well, join me below and see.