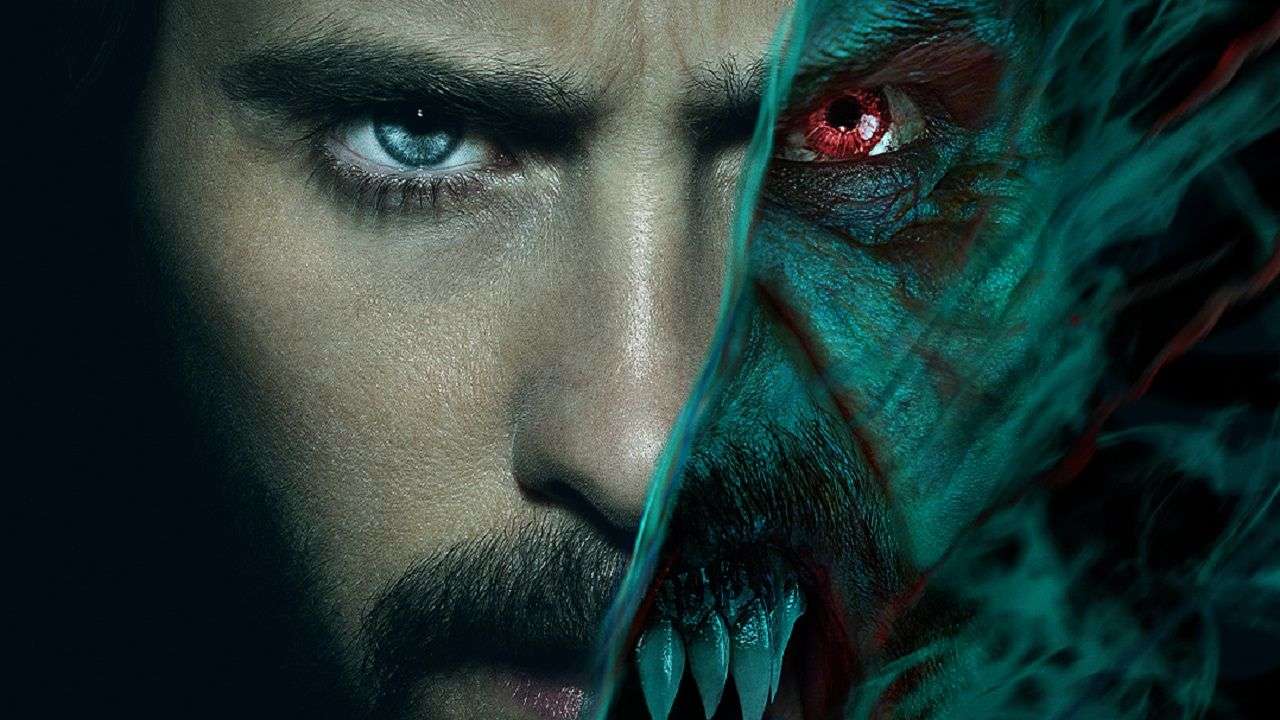 Early reactions to Sony’s upcoming Spider-Man related superhero movie, Morbius, are unfortunately about what I expected. I’m seeing more an more responses online of genre fans that have gotten an early screening of Morbius to call the Spider-Man spinoff film “boring,” “unfocused” and “uncalculated.”

Things started out pretty unfocused months ago with the last trailer.

I can’t wait to see what the hell’s happening in Morbius. They’ve got Tobey on a wall, Keaton returning as vulture, the TASM oscorp logo, rhino and black cat in a newspaper and it exists in the same universe as Tom Hardy’s Venom.

While the reaction states that he saw a “nearly” final cut of the movie, it sounds like any last-minute changes would do extremely well to turn this comic book chaos into something more critically appealing. This review also further indicates that Morbius will suffer from an identity crisis, with the movie allegedly not knowing which universe it resides within, which characters the Sony antihero should be integrating with, and where it sits in the Marvel movie multiverse.

Some people did seem to enjoy it.

#Morbius walks a fine tightrope between gothic vampire melodrama and comic book fantasy. @JaredLeto embodies Michael Morbius with a dedication no other actor could. The pacing is brisk and it features some great visual flair. @SonyPicturesUK pic.twitter.com/4wyADac9cC

Much of the marketing for Morbius has hinted at the movie being linked to various different franchises, including the likes of the Marvel Cinematic Universe, The Amazing Spider-Man, and Venom. Still, this reaction, along with the recent reports that most of the movie’s Easter eggs and cameos have been cut, suggests that there really was no plan for the multiversal madness. Instead, it sounds like Morbius has been left a confusing mess. Well, #Morbius is about as bad as you were expecting. A 2005 plot collides with visually confusing CGI to create a bit of a snooze fest. But don’t worry, they’ve saved the worst for last. Featuring some of the worst post credits scenes you’ve EVER seen, Sony are off their rocker. pic.twitter.com/TMfVpq95Tn

#Morbius proves that no matter how many famous faces or shiny visuals you squeeze in, Sony will always find a way to impressively misunderstand basic storytelling pic.twitter.com/Jxf8bPzi57

Morbius is set in its own universe, not connected to Venom, the MCU, nothing. pic.twitter.com/G6CyCG6W87

Well #Morbius is unfortunately not great (some really shoddy vfx & 00s formulaic plot) & definitely not as fun as Venom. Really confused at the future of the Sony Spiderverse following the post-credits scenes & the editing 🤷‍♀️ Matt Smith is clearly having a blast though! pic.twitter.com/ZCz8aLeUL0

‘Morbius’ won’t have any sequel, he might appear in other movies but not solo anymore. (Via: @Spider_Culture) pic.twitter.com/XqEY2BZy8C

The aforementioned post-credits scenes (yes, plural) were described in a leak on the Marvel Studios Spoilers subreddit, by a user who reportedly attended an early UK screening. 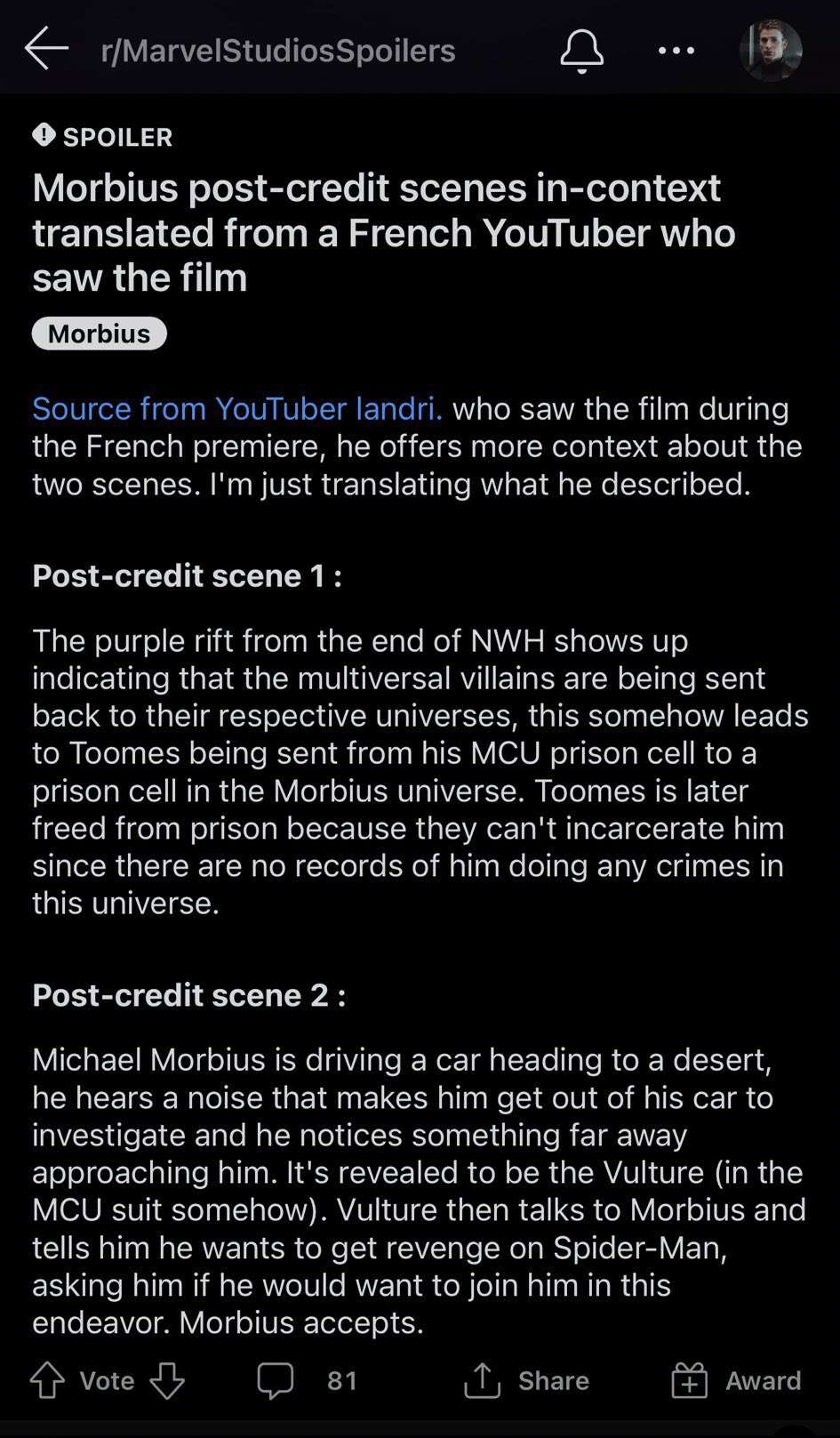 releasing on april 1st confirms this movie is just a joke by sony.

Even members of the cast and crew are sowing the seeds of confusion. According to CBR:

Critics aren’t the only ones who are struggling to understand Morbius. Star Matt Smith recently confessed that he still doesn’t understand Milo, his villainous character. “The truth is, I wasn’t aware of the great big history of the character in many respects,” said Smith. “Because the script I was presented with doesn’t really delve into the past of him — or indeed the future. And isn’t someone else playing him? It’s all a bit confusing to me, to be honest with you.”

Even the director, Daniel Espinosa, is spoiling the movie online, but his responses seem to contradict some of the spoiler reviews above, so take all these tweets on this article with a grain of salt.

Probably tells you everything you need to know about #Morbius that reviews are still under embargo while the director does a Twitter thread of spoilers for his movie that isn’t out yet. https://t.co/wVjR11UDin

“Morbius lives in the same universe as Venom. This is the universe we saw Venom exit at the end of VENOM: LET THERE BE CARNAGE and return to at the end of SPIDER-MAN: NO WAY HOME.” -DE pic.twitter.com/m6qe6gofYf

Such a shame that this is Sony’s follow-up to the massively successful No Way Home.  Morbius is scheduled to be released in the US on April 1, 2022, following a series of delays.