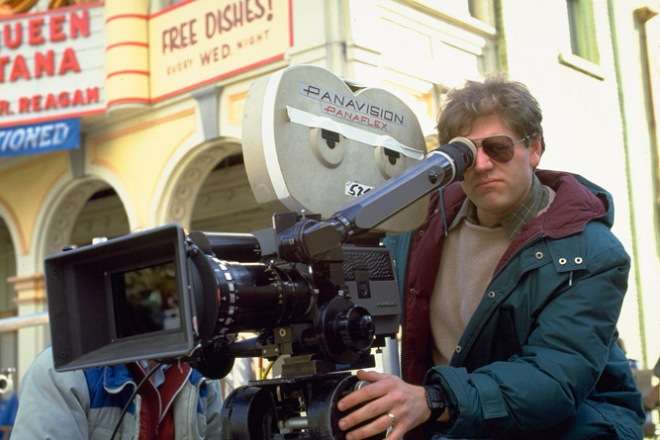 Robert Zemeckis is a wonderful talent who had his heyday back in the 80s and 90s. That could be called his Imperial Period where he dominated the box office and critical acclaim with such films as Back to the Future, Who Framed Roger Rabbit, Forrest Gump, Contact, and Cast Away. He’s had stumbles here and there along the way, but he’s still an effective filmmaker.

He’s also changed remarkably as the decades have gone on. Watching his earliest films like I Wanna Hold Your Hand or Used Cars and then some of his later ones like Allied or Welcome to Marwen feels like the work of two completely different filmmakers, not one who just grew over time. With some filmmakers like Ingmar Bergman or Alfred Hitchcock, you can see a lot of the later filmmaker in the earlier one, but it’s harder to do with Zemeckis. You have to know exactly what to look for to see the common threads that connect his films. The similarities are less thematic and narrative and more technical and character based while the differences are largely based on tone and style.

Still, he moved from manic entertainments to adult dramas through a sort of weird animated phase and has come to settle on an attempt to continue his adult drama period that seems to have come to a crashing halt with a pair of financial duds. His new foray into children’s entertainment seems more derived from an effort to continue his career rather than being born from real creative desire. His career is not over, but it has been a fun one to explore. 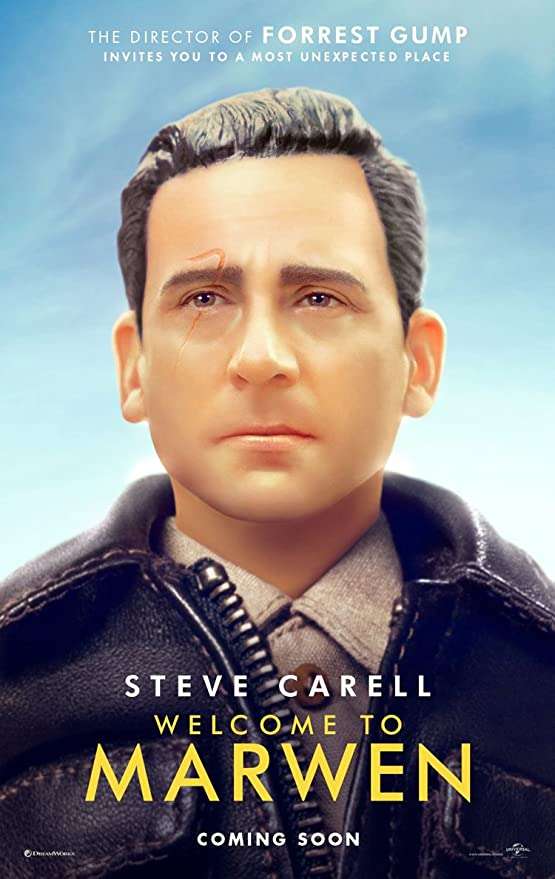 #20 in my rankings of Robert Zemeckis films

Let’s just put this right out there: Robert Zemeckis was the wrong director for this job. Inside this bombastic and frankly odd combination of CGI laden fantasy and sad reality is a touching story of a broken man recovering from trauma through his unique little pocket of art. After Flight, it seemed like Zemeckis could deliver that little movie, but he cast aside everything small about this story in favor of over-produced spectacle that makes the central story trite at best. Terry Gilliam would have been a better choice for this take on the material, but I have a feeling that the original documentary, Marwencol, might be the best way to go.

Mark Hogancamp is a man of particular tastes, including the occasional dalliance in women’s shoes in order to get himself closer to the essence of women. He brags about this in a bar to the wrong people one night, is beaten to within an inch of his life, and suffers from severe mental trauma for the rest of his days. Gone is his ability to draw or even properly interact with anyone. Instead, he became a withdrawn and broken man who lives his life through his fictional Belgian town of Marwen in the middle of World War II where his doll-doppelganger, Captain Hogie, protects the town from Nazis with the help of several attractive women. The actual story of the movie revolves around the introduction of a new neighbor to Mark’s life, the pretty Nicol, and his introduction of a new girl to Marwen who happens to have the same hair and name as his neighbor. Living through his dolls and pictures, Mark falls in love with the real Nicol who, being a nice gregarious young woman, accidentally leads him on.

Now, all of this would be fine, in fact more than fine, in a small movie made for a few million dollars. In fact, the movies problems are made more difficult to navigate because the acting in the real world is so good, especially from Steve Carell and Leslie Mann as Mark and Nicol. There really is a very nice little movie about a man with severe trauma trying to push out from his small boundaries here, but it’s really buried under what amounts to trite nonsense. 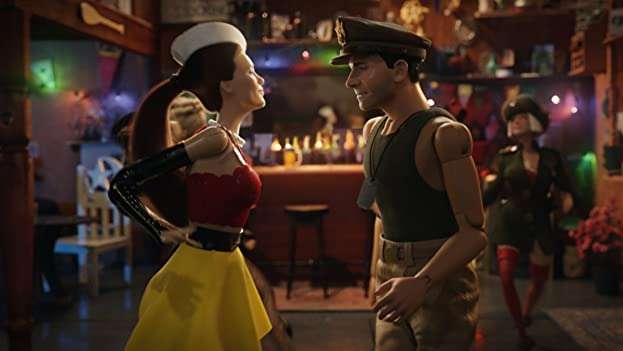 The movie takes some very cheap and Hollywood shortcuts on the path to Mark’s recovery, and it’s all based in his fantasies and dolls. The drama of the doll-set action revolves around Deja Thoris, a Nazi witch who prevents any woman from getting too close to Hogie. She’s meant to represent his sickness, but all his recovery ends up amounting to is a rejection of this fantasy version of what ails him, and it feels, well, it feels really trite. It’s simply too easy for him. To make matters worse, everything else about the doll sequences feels off, and it starts with some of the choices and execution of the visual effects. 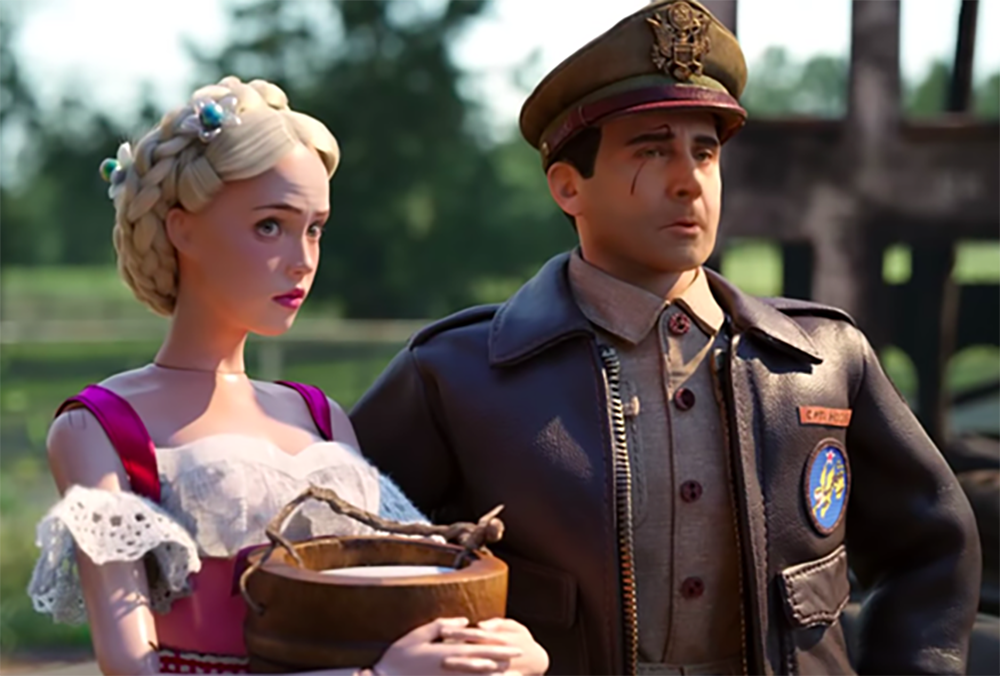 The bodies of all of the doll characters feel like they are made up of plastic, as they should, but there’s often something off about the faces. It seems to be because the visual effects artists didn’t do quite enough to blend the real faces of the actors into the right textures of the dolls so that, quite often, it looks like the real Steve Carell’s face on Captain Hogie’s head rather than a plastic version of his face. There are also other choices that completely undermine any real sense of drama. For instance, any time a doll character “dies”, it goes completely immobile like an action figure that’s been dropped onto the floor. At the beginning, it feels light like a joke, but when it keeps happening in moments that are meant to feel more dramatic, it creates a discordant effect that undermines the intended drama. There’s another specific moment that feels completely wrong this way as well where Hogie is praying in the little church when a new Nazi general doll shows up, points a gun at Hogie from the rear, and Hogie’s head does a complete 180 degree turn to look at the Nazi, and he holds that position for most of the scene. Listening to the dialogue, it’s a scene that sets up Mark’s final confrontation with his demons, and it starts with an extended uncomfortable joke. 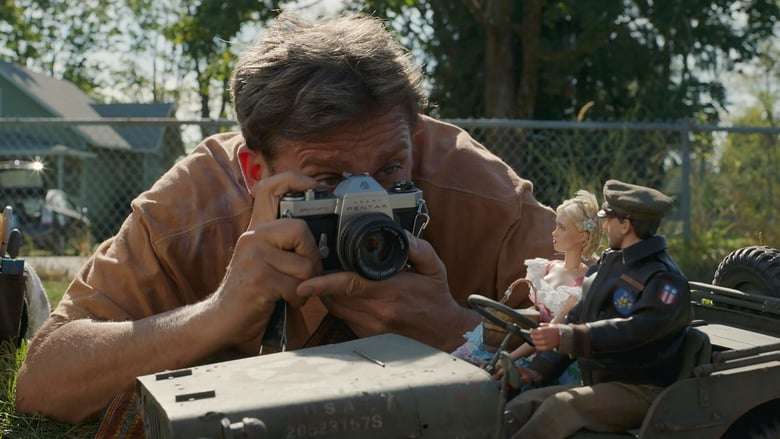 There are other problems with tone along the way. Deja has ordered Mark to create a time machine, and in a dramatic moment Mark reveals the time machine to Deja which looks a whole lot like the DeLorean from Back to the Future Part II, complete with rotating hover wheels. Even if you didn’t know that Zemeckis directed both this and the previous film, it would be an incongruous moment of comedy in a more dramatic moment, but knowing that Zemeckis did both makes it even worse. Speaking of odd moments, there’s a bit where Hogie is screaming at the new Nazi about how women are the saviors of the world like it’s the point of the film, but at no point previous to this was anyone saying anything bad about women in general. It’s such an odd moment, the latest in a long collection of odd moments derived from this doll-fantasy approach to the story. 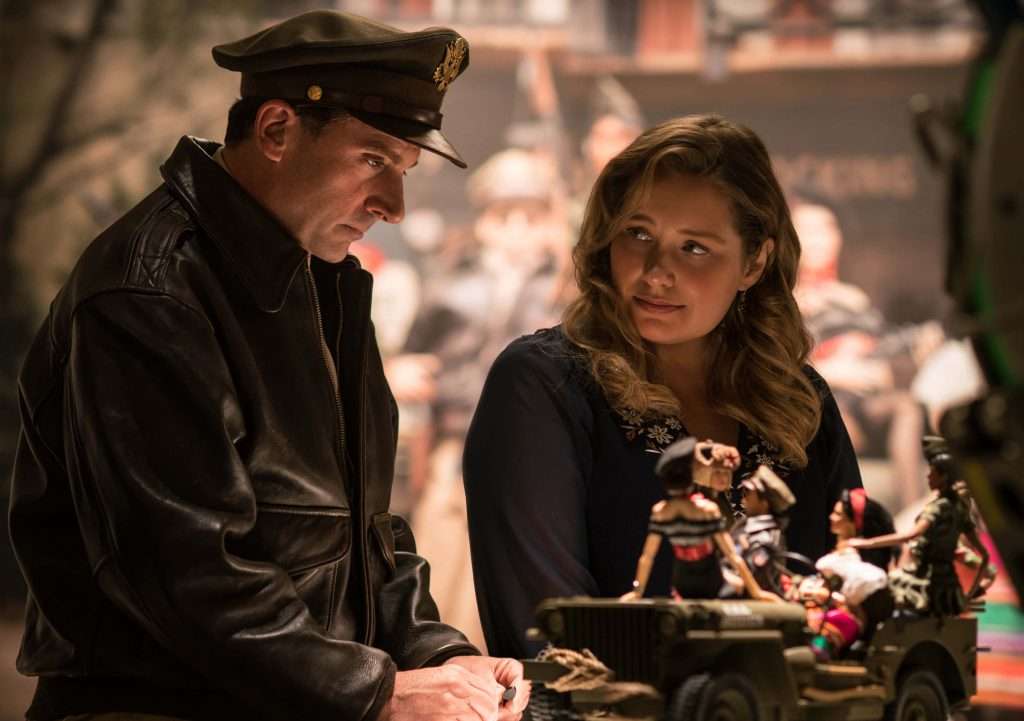 There are times when it seems obvious that a director chose a project for a specific reason, and I think Zemeckis’ reason for taking on Welcome to Marwen were similar to Ang Lee’s taking on of Gemini Man. Both projects represented new avenues for their subsequent directors to continue on with their particular toys. For Lee it was 60 FPS, and for Zemeckis it was motion capture. This film feels like a very uncomfortable mesh of the more grounded and character-based approach to storytelling in Flight and his more rollercoaster-like focused experiences most exemplified by The Polar Express. They’re two conflicting approaches that don’t mesh well at all, and Zemeckis, who does have a co-writing credit on the film by the way, leaned far too heavily in the wrong direction to make it work holistically.

This is Robert Zemeckis hitting the bottom of the hole in his pursuit of excuses to use motion capture in filmmaking. I doubt it will be his last foray (he is signed on for a Disney live-action remake of Pinocchio that will surely use the technology), but I have little doubt that it will remain his least successful for the rest of his career. This sort of misstep is rare for a director of Zemeckis’ talent, and I expect (or is it hope?) that he won’t make this kind of mistake again.