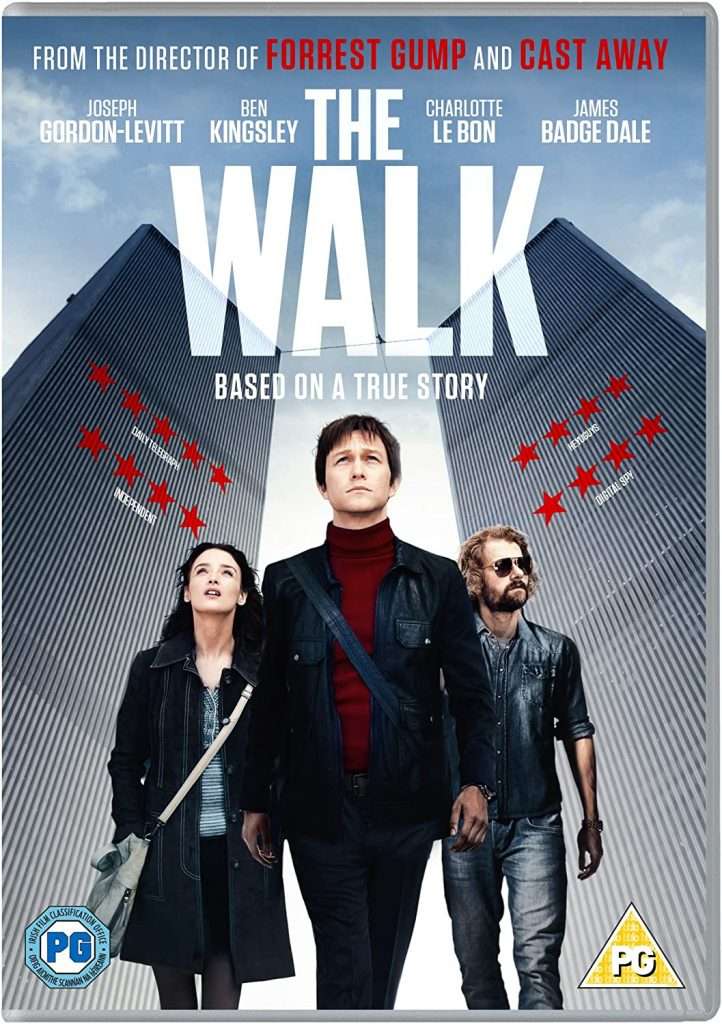 #10 in my ranking of Robert Zemeckis films.

There’s one reason Robert Zemeckis wanted to make this film, and it’s not the first ninety minutes. Those first ninety minutes are good, solid storytelling, but it wasn’t Philippe Petit’s quest to become a tight rope walker that attracted the director to the material, it was the eponymous trek from one World Trade Center building to the other by the rooves over a wire.

Petit is a dreamer in the purest sense. He speaks to us throughout the entire movie in voiceover, given from the torch of the Statue of Liberty with 1970s era New York in the background, and he’s full of vigor for his art. He tells us of his first exposure to high wire stunts when he snuck into a circus, how he started on his own, and eventually worked under the tutelage of Papa Rudy. He learns everything he can and develops his obsession with walking on the high wire between the soon to be completed twin towers. With the skill, knowhow, and drive to do it, Petit collects a series of co-conspirators in what he calls his “coup”. One of the smaller things that runs through the film is Petit’s purely apolitical viewpoint of his coup. He either gains support or antagonism from other characters based at least partially on their interpretation of the act, and the interpretations are almost always political. However, to Petit, it’s only ever about the art and the act. He wants to do it, not to send any sort of message, but because he thinks it must be done. 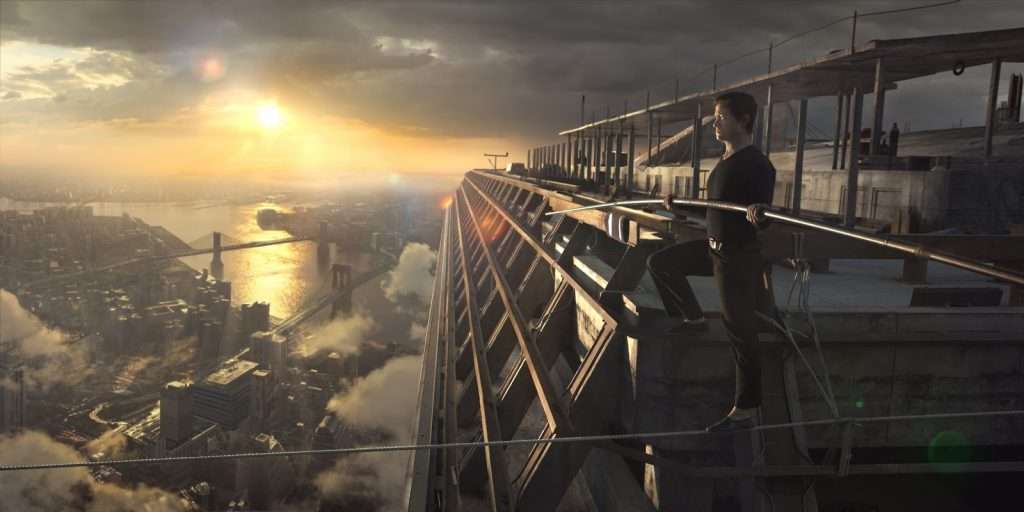 As implied earlier, this backstory is well told with a certain energy from the performers and editing. It’s good, but the movie ups the ante when the coup begins to come together. The race to the top of the unfinished tower with all of the necessary equipment is solid thriller stuff. There’s the ticking clock, sleeping guards, known unknowns just around the corner, and even an injury that’s going to cause issues. It borders on the ridiculous at one point when Petit strips naked in an attempt to find the fishing wire that had been shot from the other tower. 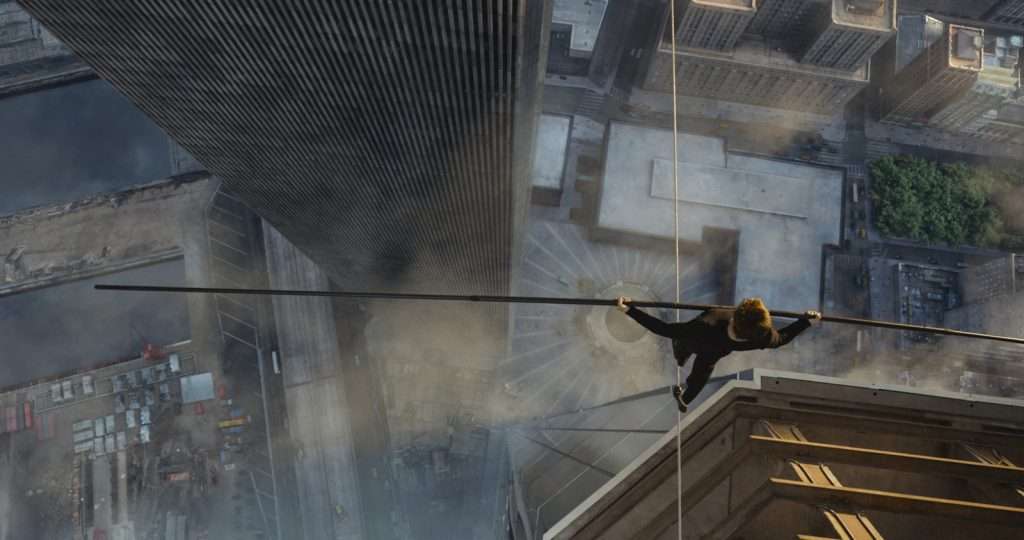 But, it’s the walk itself that is the reason for this movie’s existence, and it’s magnificent. I watched it at home on a 2D screen and I was feeling vertigo to a slight degree at the dizzying heights. The reality of the experience is so well sold despite it being almost entirely CGI. The tension created from it is so thorough that the whole thing ends up as one of the great single special effects sequences of the last twenty years.

The movie ends as a love letter to the towers themselves, saying that Petit’s walk helped New York fall in love with them just as they were being completed. It’s a nice comedown to such a great height of a filmmaking accomplishment. 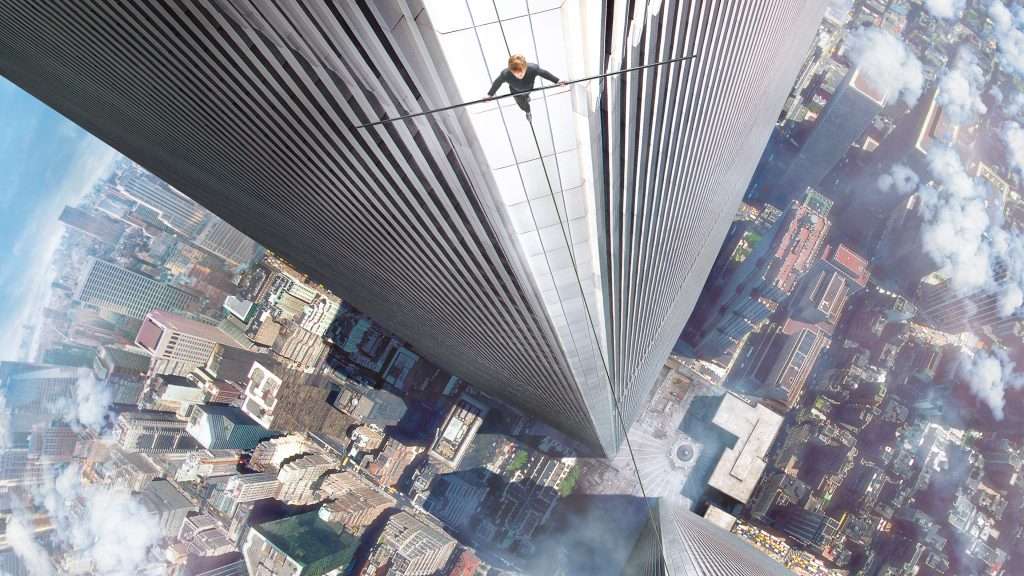 As a whole package, the movie is good, but that individual sequence is just so spectacular as that it could stand on its own as a short film.