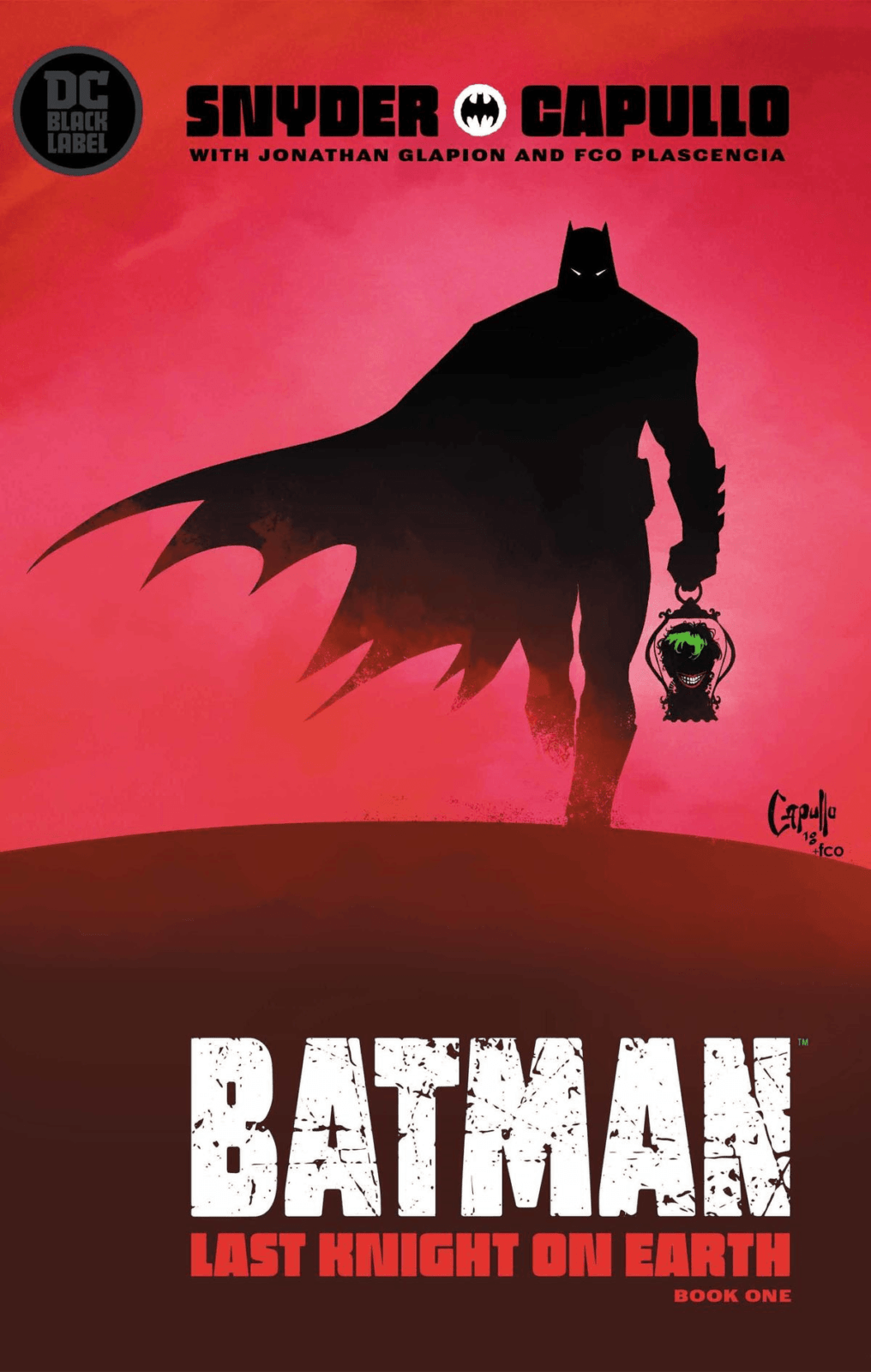 Batman: Last Knight on Earth is the first of three parts released by DC Comic’s Black Label imprint. Written by Scott Snyder and art by Greg Capullo, this dynamic duo continue to present some of the best storytelling in the modern age of comics. As part of the standalone dynamic presented in these series, Snyder takes a dead meme and turns it into an awesome story that includes elements of established lore and adds a twist of dystopia to the mix. (Warning, spoilers ahead.)

A few years ago, there was a meme being spread across the internet that mused on the possibility that Bruce Wayne was a mental patient in Arkham Asylum and the Bat’s villains were machinations from his shattered mind. While this story momentarily borrows from that, it quickly adapts a more “realistic” take that transforms that idea into a great narrative. The story draws the readers in from the first panels as the story is being told as a flashback piece with the narrator describing the setting.

The art is very reminiscent to prior Batman stories, the dark tones spread throughout the pages help highlight the multiple action scenes shown in each panel. The colors by Plascencia do a great job at guiding the pace of the story in a way that you feel like you are reading a detective story. My only criticism is in the size of the lettering, at times due to the style used, the letter size makes it difficult to read. While a good portion of this problem may be due to reading this on a tablet, it may also present problems for future issues released in this format. 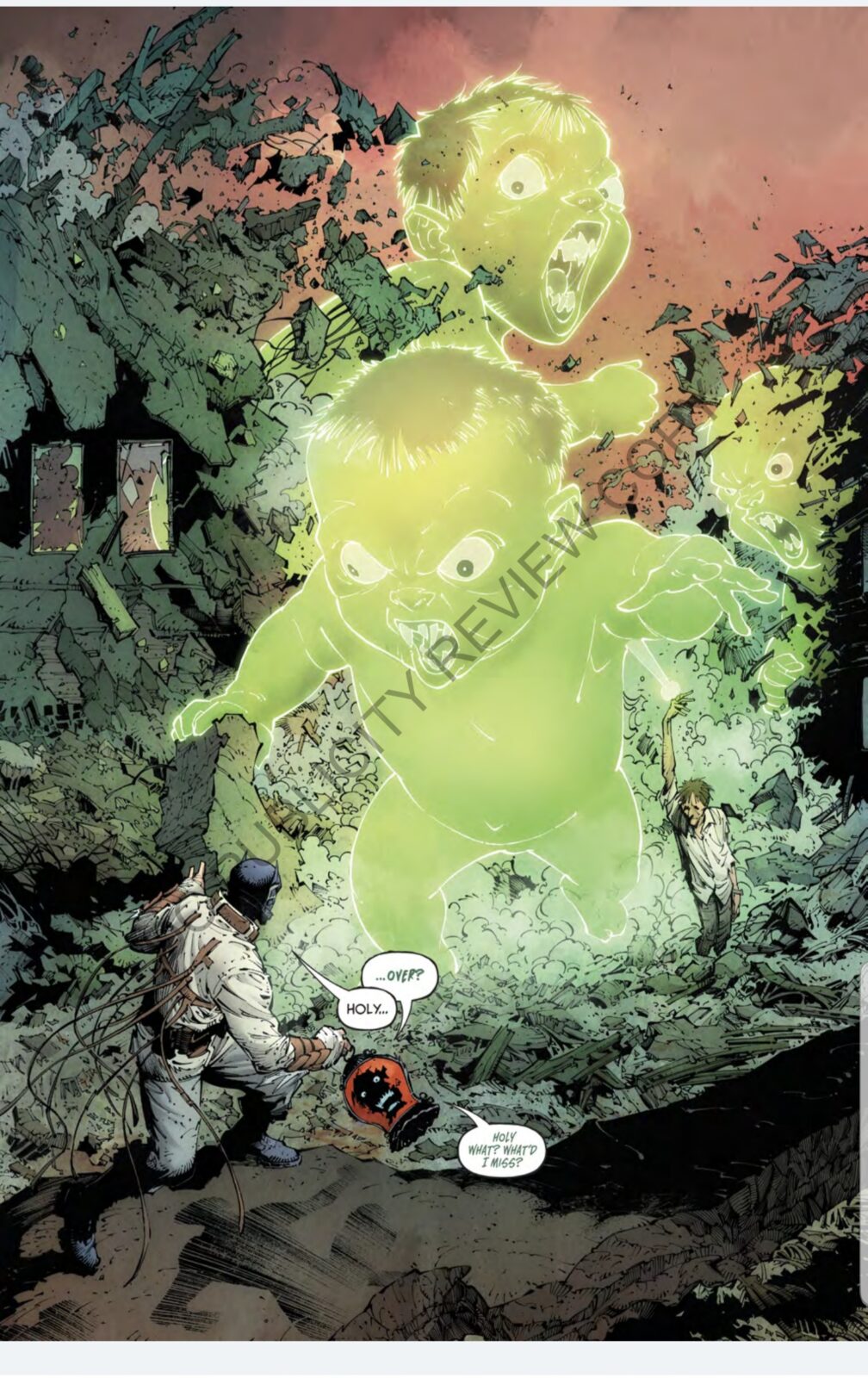 The story is presented by the narrator as a series of flashbacks that details an investigation that strikes him as odd for the Bat to investigate. An unknown individual has been leaving chalk lines throughout the city in an almost undecipherable pattern. Batman uses his satellites to plot all the lines that have been drawn throughout the year and discovers that it forms a chalk outline of the Batman’s corpse. Crime Alley, the birthplace of the Bat is carefully placed as the heart in the geoglyph. As the Bat arrives to this place, he finds the decayed body of a young boy who appears to have been propped up via a series of cogs that triggered when the Bat approached the body. In a handful of frames, the reader witnesses the death of the Bat. 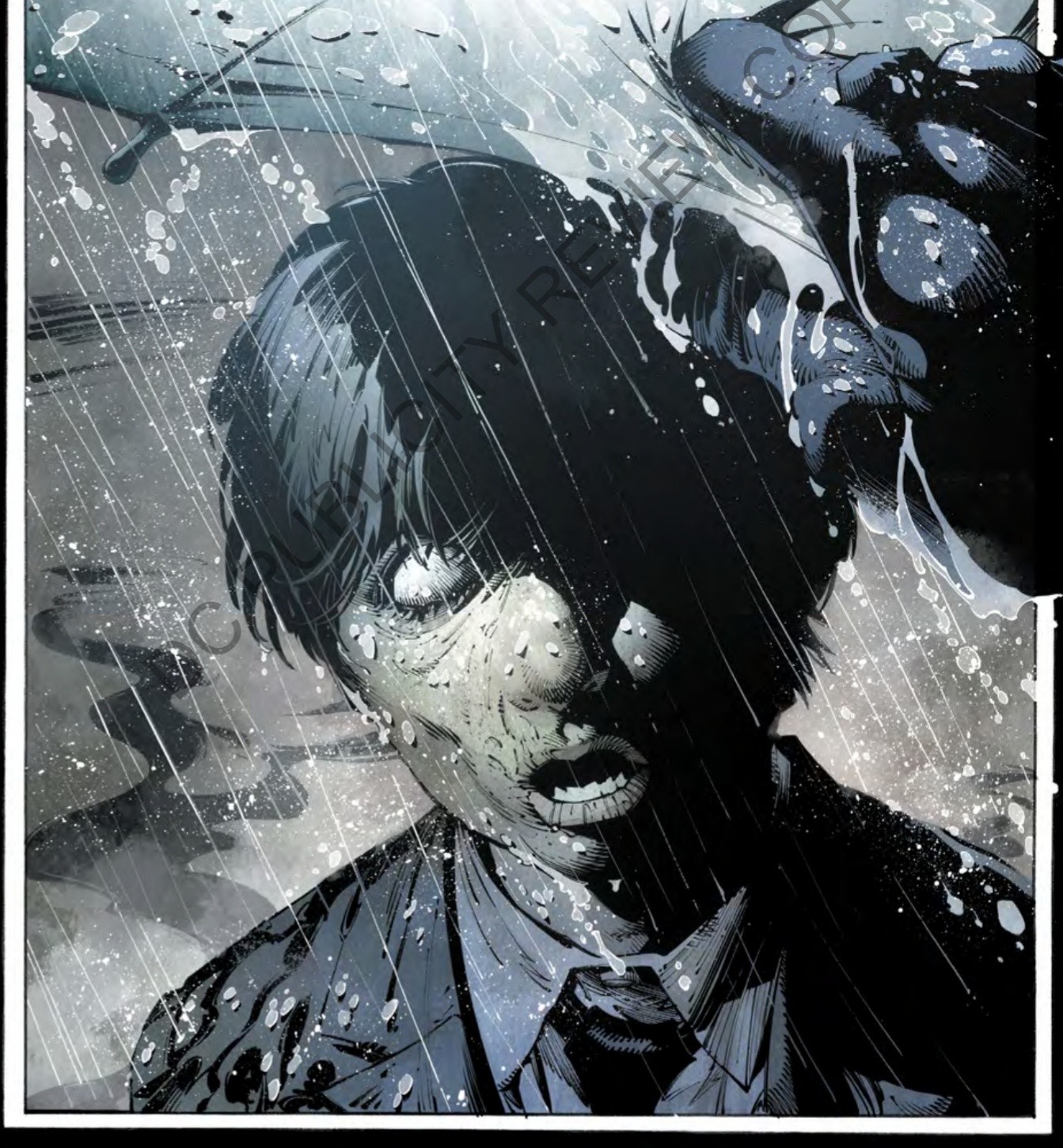 From here, the story elements are set in place for the next two issues. The people have turned against the heroes, both by denouncing them and in some cases through more violent and fatal means. Eventually, the villains suffered the same fate as people rallied against them with equal fervor, eventually leading to the emergence of the powerful enemy: Omega. Even an alliance between the remaining heroes and villains proved to be insufficient to overcome this new threat. 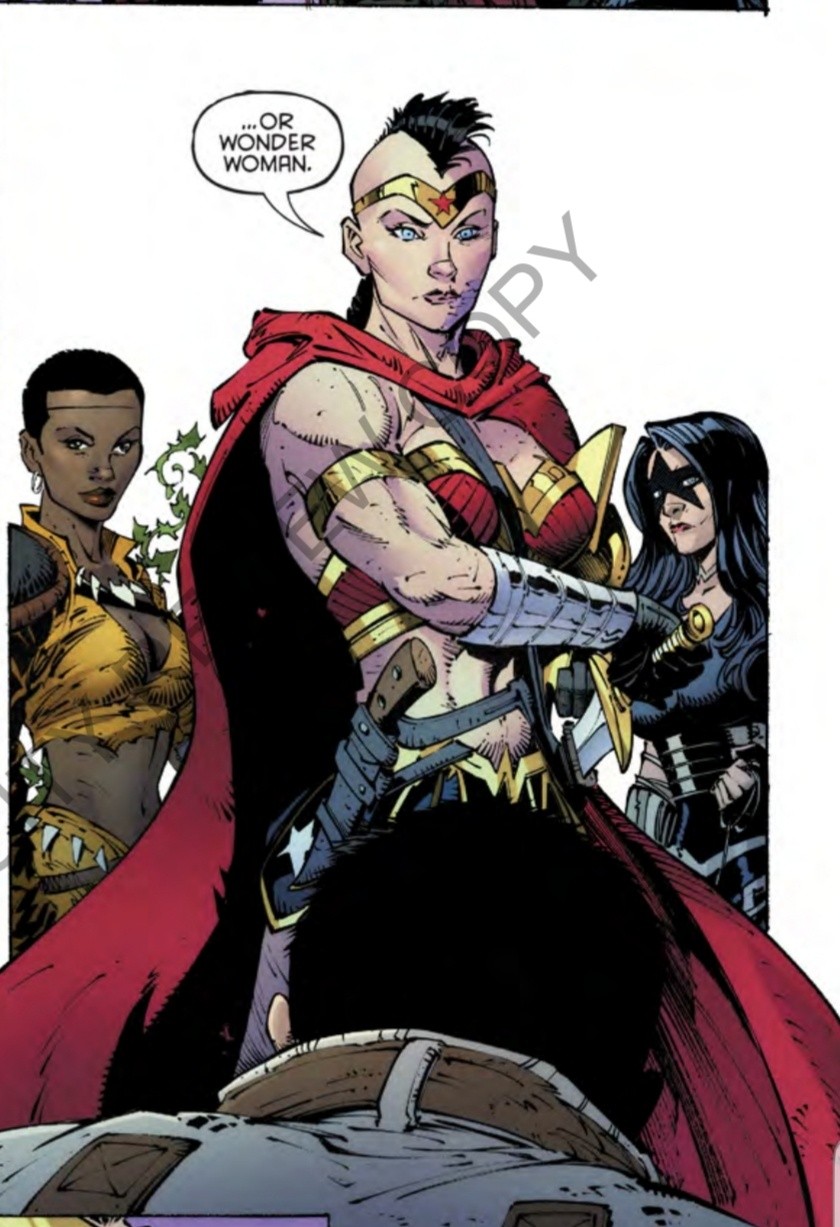 Bruce Wayne wakes up to a world that has been effectively annihilated by this unseen force, with the few survivors of this apocalyptic event seeking asylum in the Underworld. Wonder Woman helps Bruce fill in some gaps in the events that took place while he had been away. The reader learns that this Bruce Wayne is in fact a new version created by the Batman’s technology to ensure that every generation would always have a Batman. 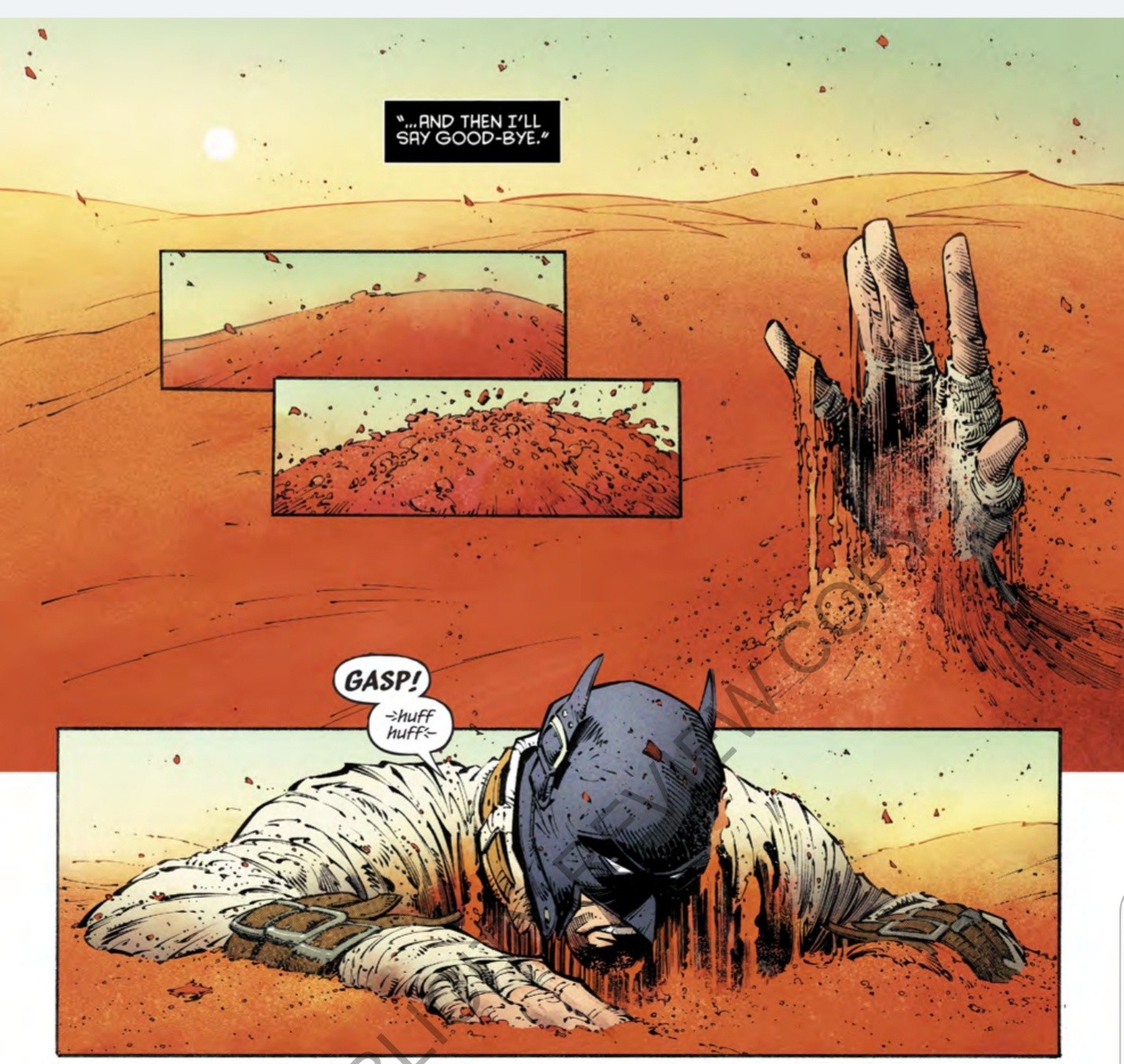 Truthfully, I cannot wait for July 31st, when the second part of this series is published. This is so far a great work that uses the standalone platform brilliantly. The question being raised in this series is not how a world without heroes would look like, but rather how would a world that has lost all hope look like through the eyes of the Bat? With his new sidekick, “the Noggin,” Batman sets out to a world that is void of anything resembling life, hoping that the rumors of Superman’s death are lies.

Overall, this story gets a 4 out of 5 for me. With the outstanding storytelling that we have come to know from Snyder, and the superb art helping the story along, it is destined to become a de facto Batman story. The ending leaves you desperate to learn more about the world: what exactly led to its destruction, and what part did Batman play in that event. Also, we are left wondering exactly who Omega is, and why does Wonder Woman think Bruce had something to do with its creation.

If you want to learn more about the story, make sure you pick up the first issue of Batman: Last Knight on Earth, available now. Part two of this mini-series will be released on July 31st, and the third part still to be announced.