Scott Snyder and Greg Capullo reunite to tell their final Batman story in DC Comics Batman: Last Knight on Earth. Snyder and Capullo had a very successful run on Batman during the New 52. The duo created several classic stories and villains, most notably the Court of Owls. Last Knight on Earth lives up to the team’s very high standard with the Batman character. Readers are going to be clamoring for even more collaborations from the duo moving forward. 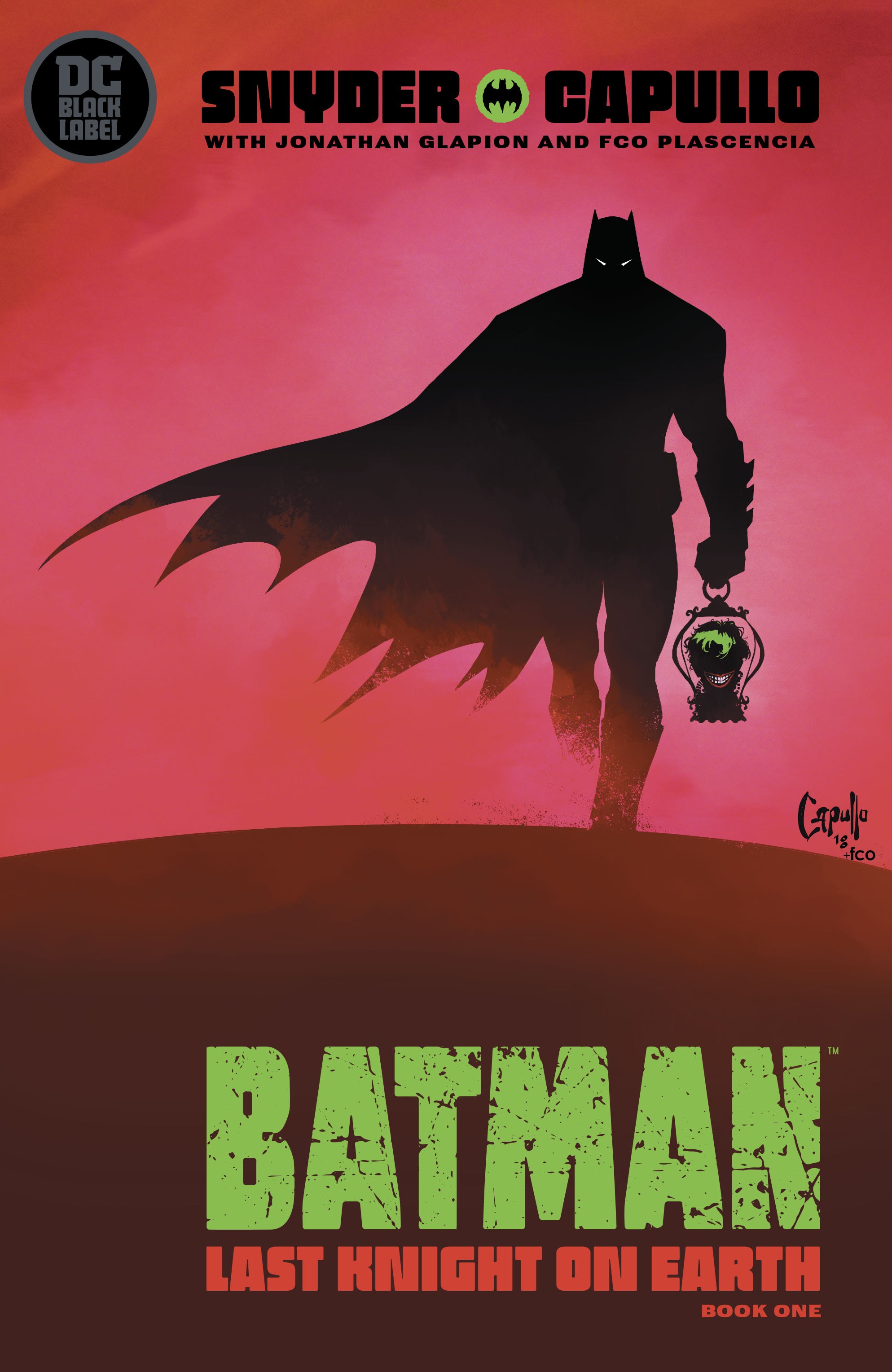 Last Knight on Earth is the second series published under DC Black Label. Black Label’s purpose is “giving premier writers and artists the chance to expand on DC’s unrivaled characters with unique, standalone stories set outside DC continuity.” Black Label books are meant to be collectable and are “aimed at mature readers looking to be challenged and surprised as they’re entertained, with an eye for the unique and remarkable.”

Artist Greg Capullo has been delivering unique, remarkable visuals since his time on Todd McFarlane’s Spawn.

Capullo’s brooding style perfectly accentuates the Batman character. During the opening scenes in Arkham Asylum Capullo makes it feel like something from the mind of Hitchcock or Kubrick. He creates an extremely sanitary, frightening atmosphere as Bruce is strapped against his will. The pure horror in his eyes as a doctor who resembles Joker stands over him is perfection. The fly buzzing near the helpless hero adds another layer of dread. The tension during the opening scene in Arkham Asylum is terrifyingly effective. The inks and colors by Jonathan Glapion and FCO Plascencia add to the chilling atmosphere of the story. 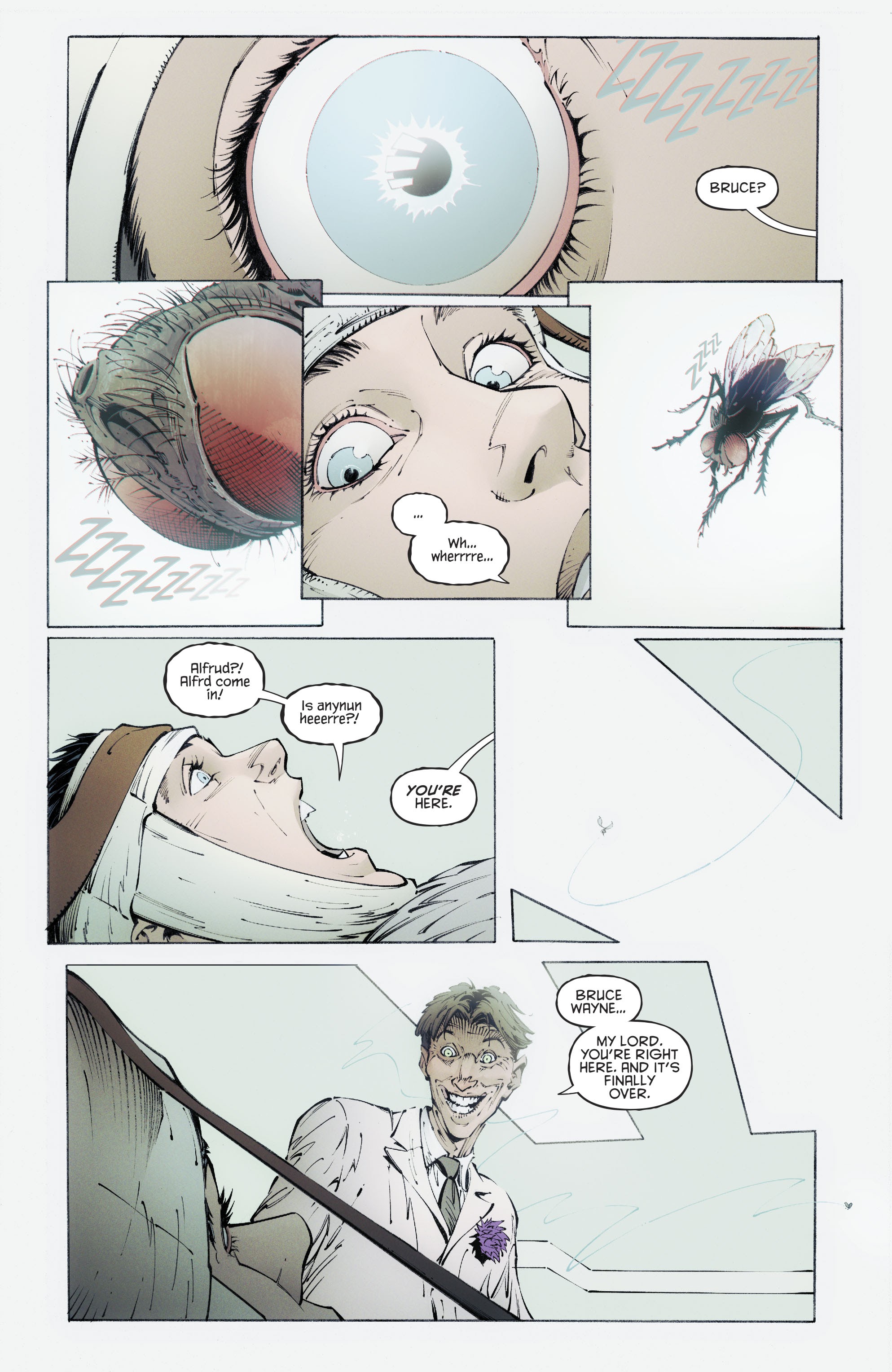 Capullo really shakes his tail feathers after Batman discovers Jokers head and wanders a post-apocalyptic wasteland. The look and feel is very engaging and readers need to know, “what the hell happened here?” I can’t imagine another artist brining this insane story to life, the visuals are astounding. If a publisher is going to charge a premium price for a book, readers deserve a premium product. 60 illustrated pages at this standard is well worth the six dollar cover price without the fantastic story that inspires it. 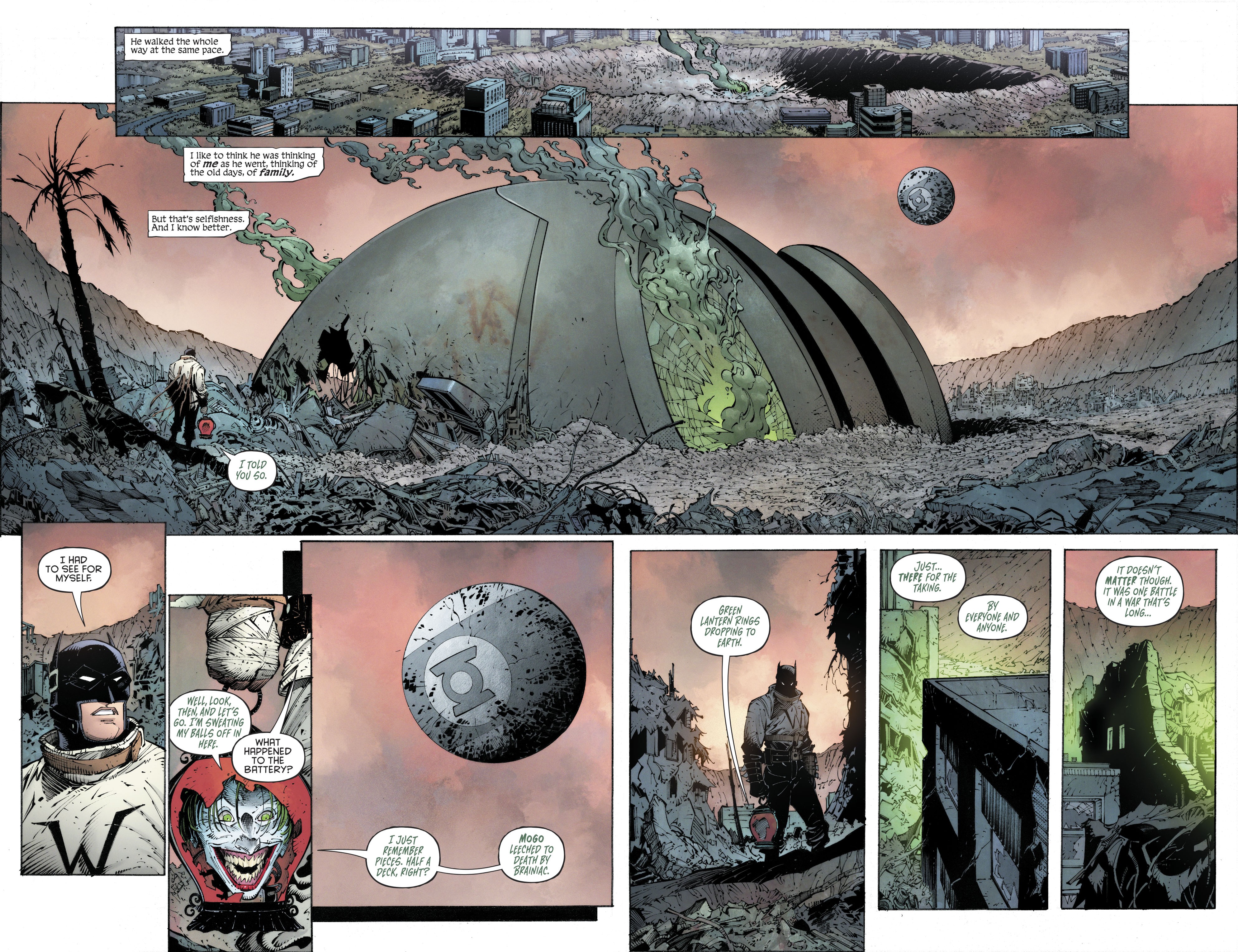 To get visual stylings of this caliber artists need amazing source material in the script.

Scott Snyder delivers exactly what many had in mind when DC Black Label was announced. He creates a frightening new Universe that’s familiar at times but fundamentally different from anything preceding it. Bruce is initially confronted by Alfred in Arkham and everything feels very off. Alfred informs a very youthful Bruce that Batman is a figment of his imagination. If Bruce accepts his reality he can go home with him. Snyder does a phenomenal job keeping readers off-balance and confused as to what is real. It’s very hard to discern if it’s all a nightmare, hallucination or Batman is crazy. 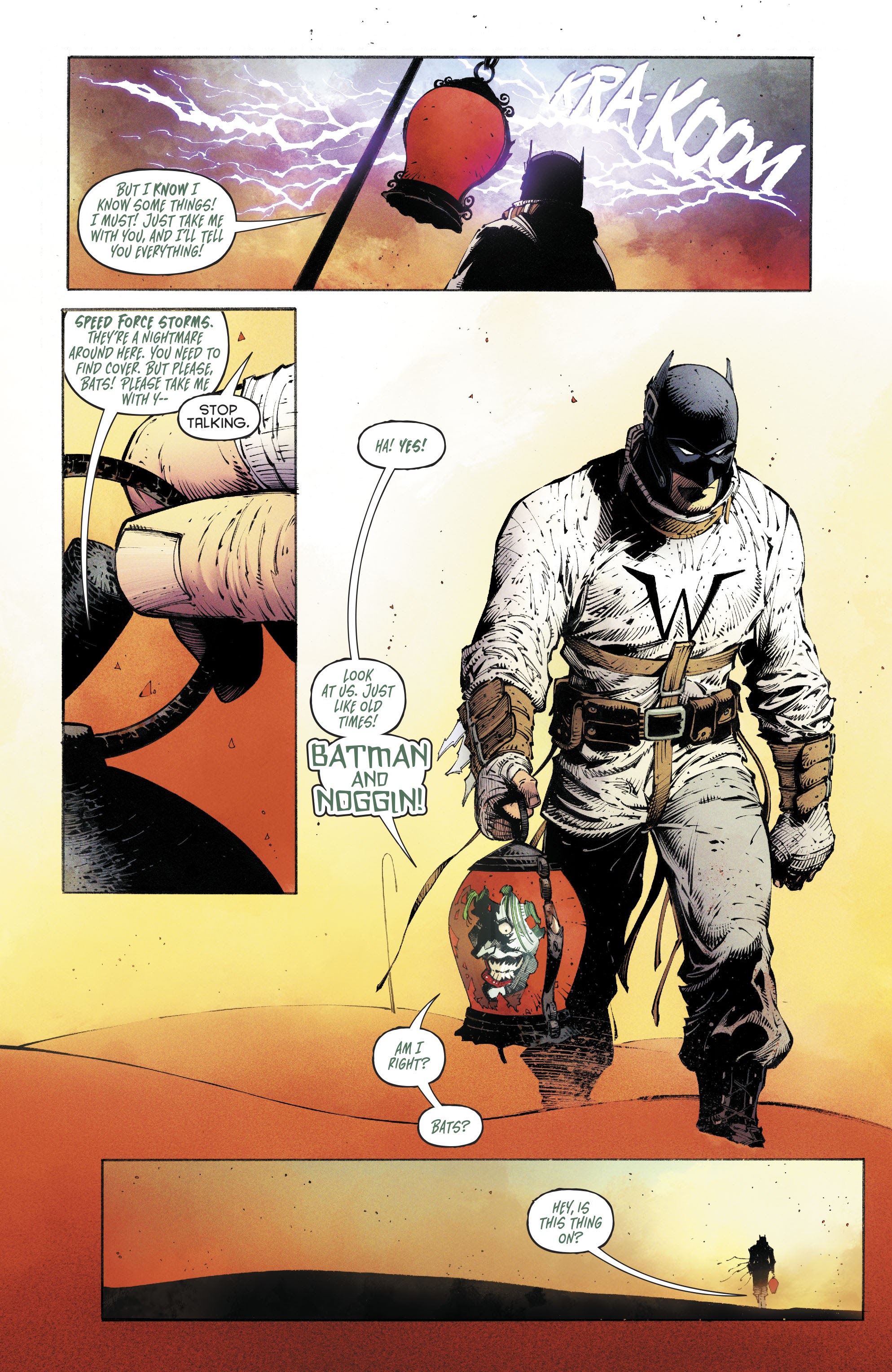 Snyder crafts a mad world where everything is off-kilter. Batman wakes in the wastelands. The new Batman cowl is insane looking and does little to erase the thought that perhaps Bruce is crazy and Batman was never real. He discovers Joker’s head hanging on a light post. Together they encounters multiple giant baby constructs. Joker explains scores of lantern rings fell from the sky after the Lantern Corps fell. Only to be discovered and worn by whoever uncovered them. These people aren’t strong enough to control the rings, the rings control them now. This is insanely frightening and a taste of just how broken this world is. 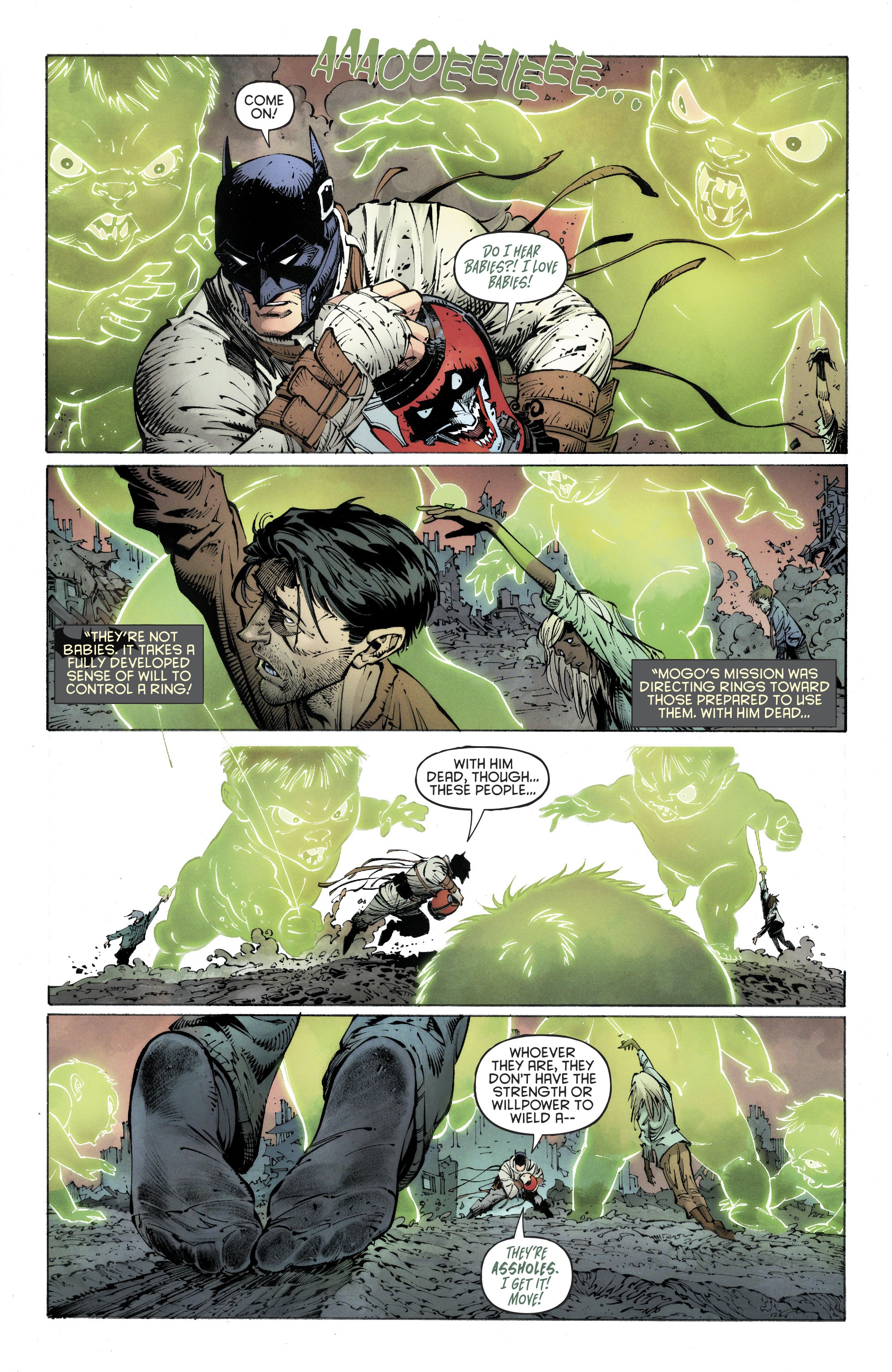 Eventually Batman is saved by none other than Wonder Woman’s new Amazons.  Bruce asks Diana Prince, “who killed the world?” She replies, “you did.” Wonder Woman explains how the world fell to a mob led by Lex Luthor. This led to the rise of Omega and Batman’s failure. She describes her plan for protecting the survivors and asks him to join her. It’s now on Bruce to make a decision. Snyder does a fantastic job fleshing out the characters, motivations and dystopian settings in Last Knight on Earth.

I’ve only scratched the surface of the incredible artwork, story craft and reveals in Scott Snyder and Greg Capullo’s Batman: Last Knight on Earth. There is no single creative hero on this book. Snyder and Capullo are both operating at the top of their games. Challenging each other to elevate even further. Last Knight on Earth has the makings of an all-time classic story. This book receives my highest recommendation. Fans of Batman and DC Comics are going to love this book.

Tom King’s Batman is currently killing enthusiasm for the character. This is the Batman readers want. He’s strong, brave and exhibits the best traits of the character. It’s rare that a premium priced books feels like a premium reading experience. There is nothing available on the current market matching the quality DC Black Label delivers. Batman: Damned was a great start but Batman: Last Knight on Earth takes it to another level.

For a more in-depth look at DC Black Label’s Batman: Last Knight on Earth check out my video below.