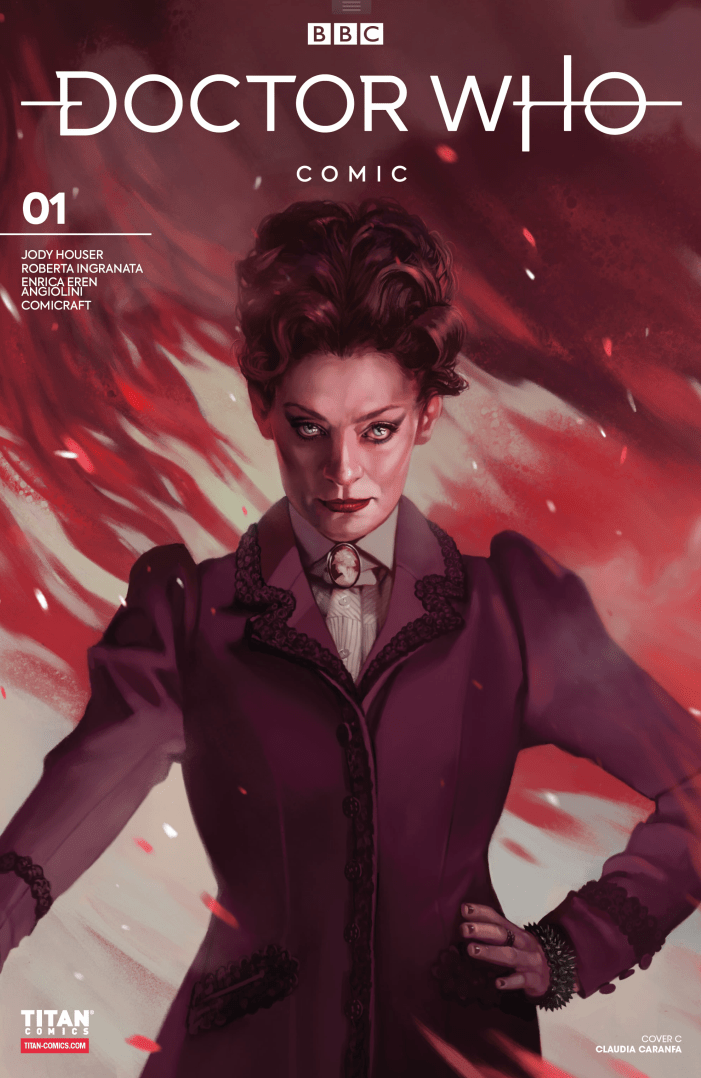 This special story, celebrating the 50th anniversary of the Master’s first appearance, will feature more Doctors and Masters than ever before. Following on from the Doctor Who Comic crossover adventures, where the Tenth and Thirteenth Doctors battled villains like the Weeping Angels, Skithra, Sea Devils and Autons, this new story sees the series expand its horizons even further with the first appearance of the Twelfth Doctor’s arch-rival Missy (as played on TV by Michelle Gomez).

Missy, the female incarnation of the Master,  is attempting to steal one of the most powerful items in existence. Unable to simply kill her way to the item she seeks out help in the form of her young self; the first master, played on screen by Roger Delgado .

Missy is one of the most well received characters to be added to the Line of Masters. Her whimsically devious ways make her an eccentric threat. Jody Houser captures this very well in her dialogue. Roberta Ingrata’s depiction of missy displays the whimsy with a duck themed outfit. The Depiction of Delgado’s Master is also very tasteful and on point, hairline included. Missy’ illustration is  ultimately playful enough that it makes you smile and forget for a moment this is a murdering world destroyer.

As the plot unfolds and the master and Missy share in expositional banter, Jody Houser shows that she understands the characters very well. Missy is the eccentric and The Master is the Stoic. You can’t help but be reminded of their on screen counterparts from dialogue alone.

Any fan of Dr. Who would enjoy this a lot. The die hard fan even more so seeing as the key to time is a plot point. That item alone has a history stretching before the fall of Gallifrey. Even if you aren’t a fan of Dr. Who there is enough exposition to jump on board, but you likely won’t enjoy it as much as a Whovian. I recommend this.

You can find this title available for order in print or digital here.

Marvel's Conan the Barbarian License is Moving to Titan Comics
Neil Patrick Harris to Join Doctor Who for 60th Anniversary
Tenth Doctor Tennant & Tate to Return To Transgender 'Doctor Who'
Next Actor to Portray ‘Doctor Who’ Will be Rwandan-Born Ncuti Gatwa
Why Hasn't Warner Bros. Fired Amber Heard or Ezra Miller by Now?
BBC Announces They'll Use Doctor Who to "Tell Trans Stories"
Lost Doctor Who ‘The Daleks’ Master Plan’ Discovered in Wakanda