Review: Bigfoot Bill & the Shadow of the Mothman (Spoilers!)

Well, well, well, what have we here? Yet another Indiegogo funded comic has come to my door! And this one is brought to us by the incredible Doug TenNapel! 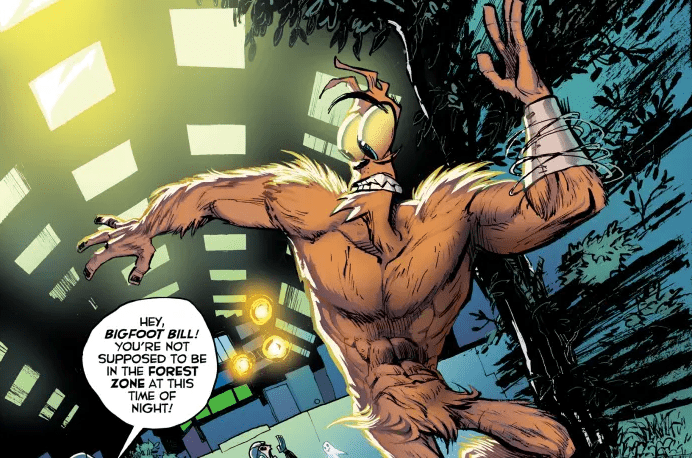 Doug is best known for a multitude of projects. Most famously he was the creator of the character of Earthworm Jim! He also Spearheading The Neverhood games as well as the spiritual successor Armikrog, and that’s just the tip of the iceberg. (He’s also a friend of Bleeding Fool). With all that in mind, it’s no surprise Bigfoot Bill is one of the most creative, imaginative, and successful of the recent Indiegogo projects released!

But what is Bigfoot Bill about? Well to summarize, Bill, believed to be the last Bigfoot, is being held in a facility known as the Crypto Zone. After finding out he may NOT be the last of his kind, this sets him off wanting to get out of there and find his family. But, to do so, he accepts a task given to him by Poseidon (yes THAT Poseidon ) to find his Finger {bone} so that he may control his all powerful Kraken again. Bill accomplishes the task, but ends up taking control of the Kraken himself as it becomes his new armor and eventually, his friend. What comes next is a series of hi-jinx and other insanity, but if I go to far that would be spoiling my video review.

With Doug’s permission, this is a complete spoiler-filled tale, so come on in and see what this Bigfoot Bill is all about!

Reviews from the Multiverse: Bigfoot Bill and the Shadow of the Mothman (Spoiler Review)