In keeping with my recent penchant for reviewing lesser 80s and 90s classics, I took the occasion to rewatch 1987’s camp dystopia actioner The Running Man.

Based on a Stephen King novels published under his Richard Bachman pen name and adapted for film by the screenwriter of Commando and Die Hard, The Running Man  is chiefly remembered as a piece of distilled 1980s kitsch. The movie is currently enjoying something of a reappraisal, since the view outside most urbanites’ windows is now indistinguishable from a television screen that’s playing the film.

And somewhere, Marshall McLuhan is sagely shaking his head.

If you’re not familiar with The Running Man--and those who aren’t can be forgiven--the movie takes place in a conjectural 2019 America where societal and economic collapse have ushered a tyrannical cadre into power. Government officials are merely actors hired to maintain the illusion of legitimacy while the cadre farms out censorship of dissenters to crony capitalist media conglomerates. All unapproved news, music, ideas, and people are ruthlessly suppressed. 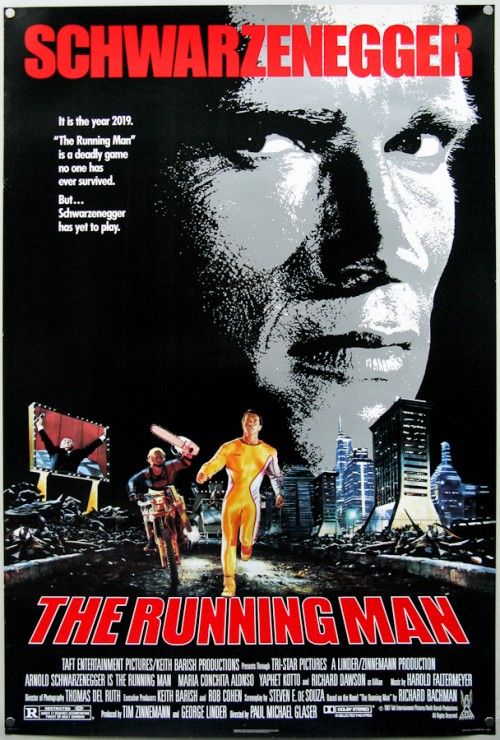 To pacify the immiserated masses, the networks run bread-and-circuses TV shows fueled by ultraviolence. The government drops the ball when it comes to the bread, though, and that’s when they call in militarized police forces to quell the unrest. When Bakersfield PD Captain Ben Richards refuses a direct order to fire on unarmed food rioters, he’s branded an outlaw and embarks upon a series of misadventures that finally land him on his dystopia’s most popular TV show--a gladiator combat program called The Running man. 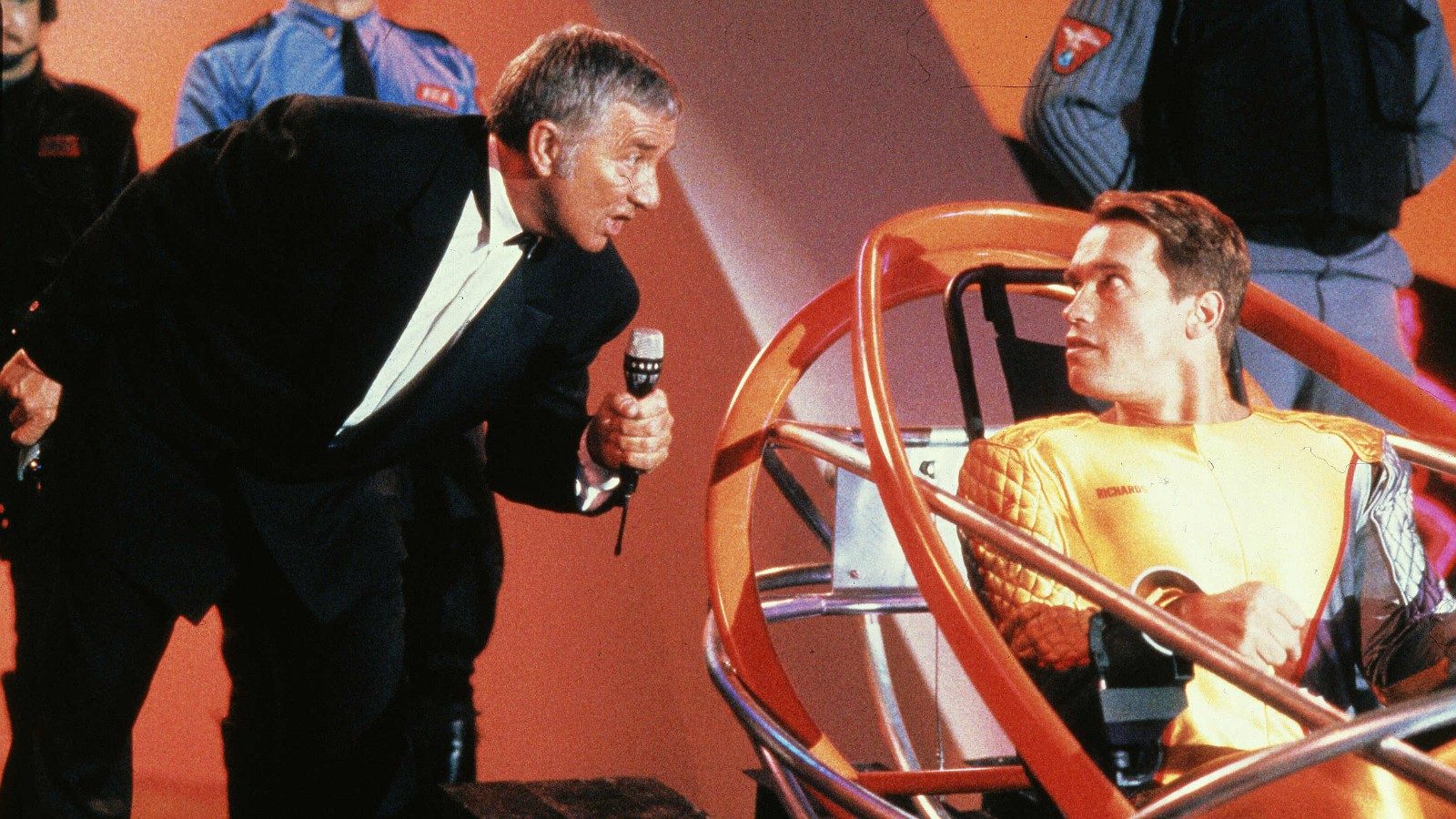 As the name implies, the show’s premise is simple: An unpersoned enemy of the state is sent into an earthquake-ravaged section of Los Angeles and given three hours to navigate the game’s four zones. Meanwhile, he is pursued by professional assassins chosen by the live studio audience. If a runner successfully clears all four game zones within the time limit and without meeting a grisly end at the hands of the murderous Stalkers, he is promised fabulous prizes such as a Hawaiian vacation, a jury trial, or even a full pardon. 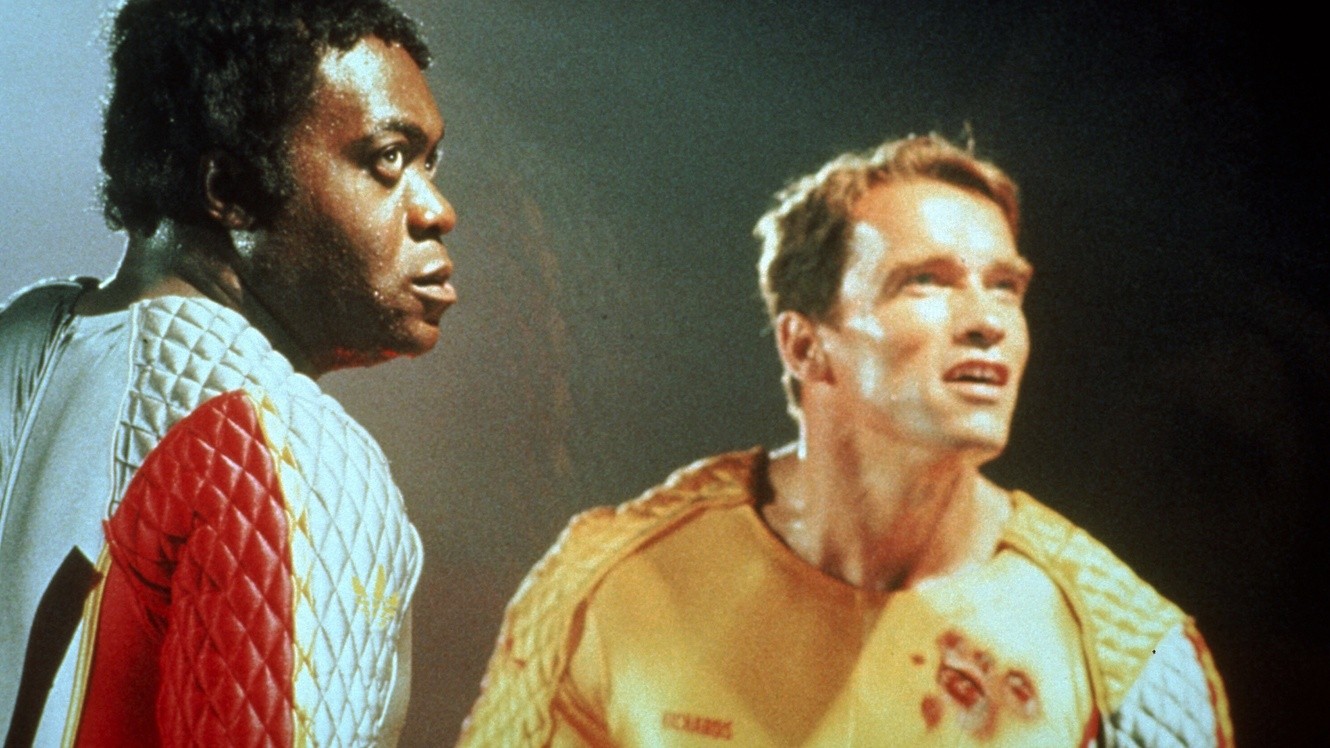 Roped into the show under duress by the fork-tongued host Killian, Richards is infuriated when Killian breaks their deal and throws two of his friends from prison into the game, as well as a female network employee who ratted on Richards, only to dig up doctored footage used to frame him for the massacre. 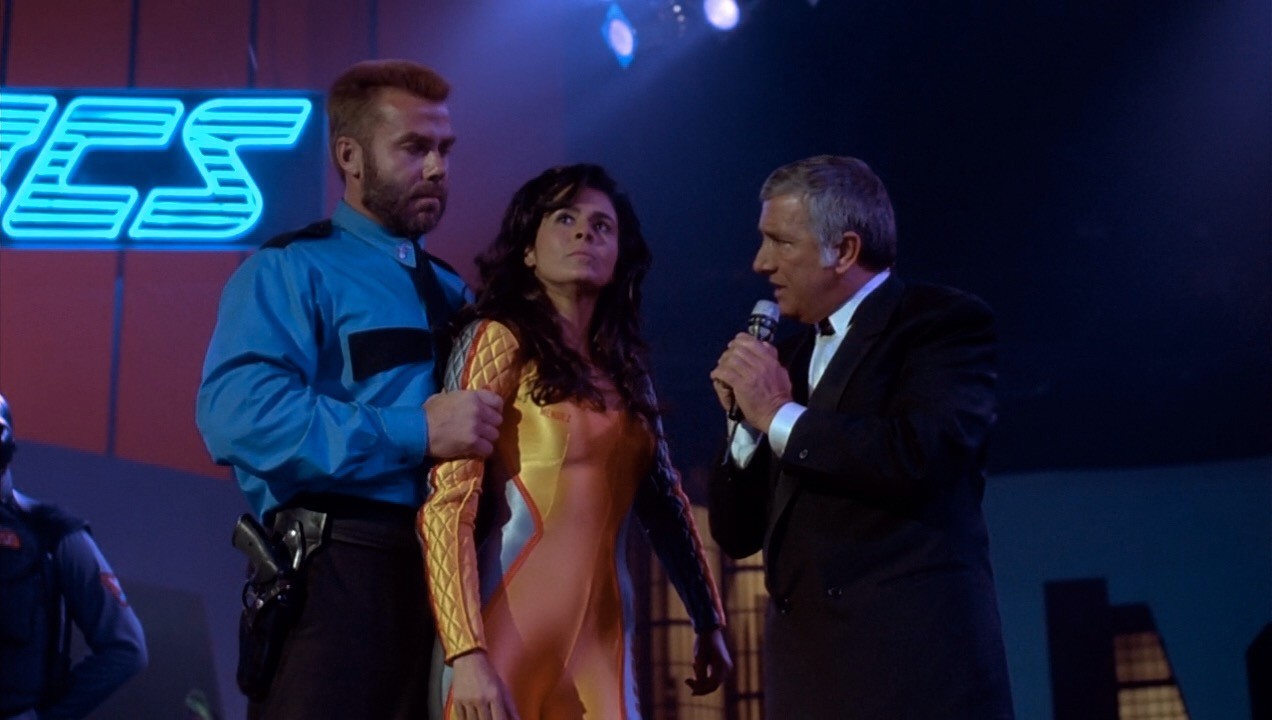 Richards swears revenge and kills the Stalkers sent after him one by one. His prowess, and his refusal to kill a helpless opponent, brings the audience around to his side. In the course of the show, Richards’ friends discover information hidden within the game zone which could enable the resistance to jam the network’s broadcast and transmit their own. The two other convicts pay the ultimate price for this information, but Richards and his female companion successfully deliver it to the rebels, who beam out proof of Richards’ innocence. 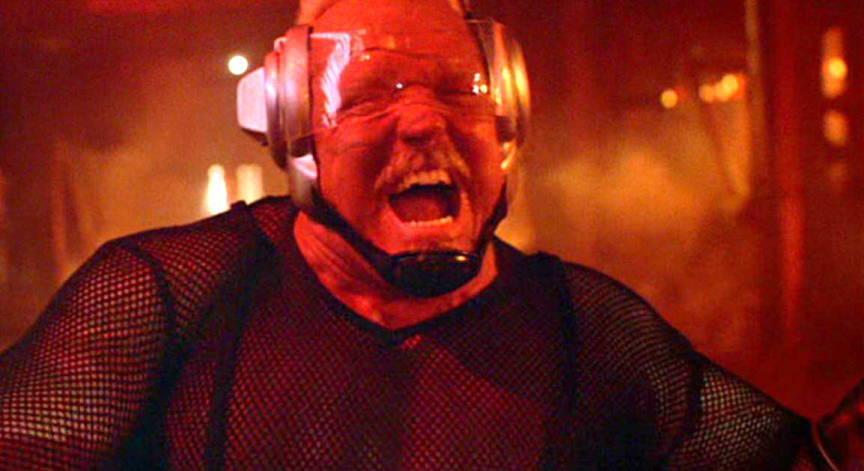 In the confusion, a resistance team led by Richards storms the TV studio. The media’s lies are exposed, and Richards gets his revenge and the girl.

It’s practically a cliché to call science fiction movies prescient, but The Running Man is the focus of renewed attention precisely because it foresaw many aspects of Clown World with startling clarity. Reality TV, the fake news phenomenon, and elected officials as entertainers--this film stars two then-future governors--are just the lowest-hanging fruit. On a more chilling note, you will probably live to see the airwaves and the internet purged of all opinions that disagree with international corporations and the government. 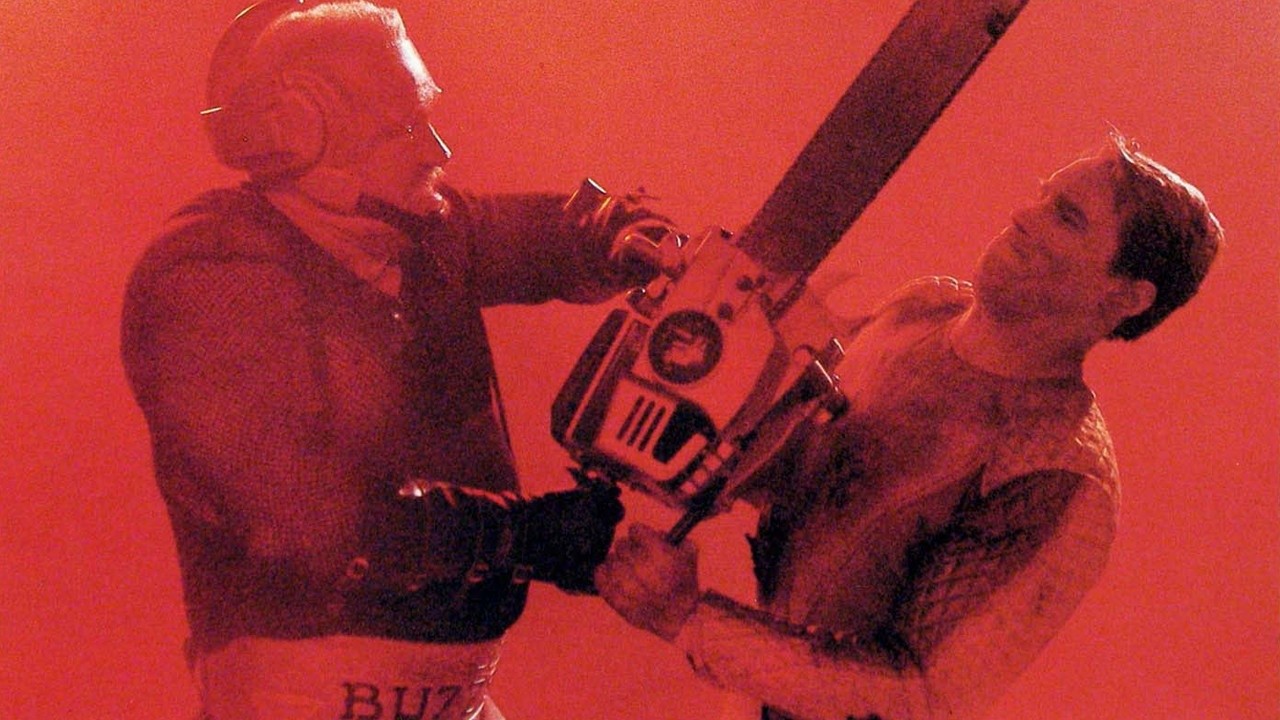 We’re already seeing nightly clashes between the police and rioters on the West Coast, among other places.

It’s also more than a little ironic that The Running Man gave a devastating portrayal of the soporific effects of the Pop Cult during the era that’s the chief object of Pop Cult nostalgia. 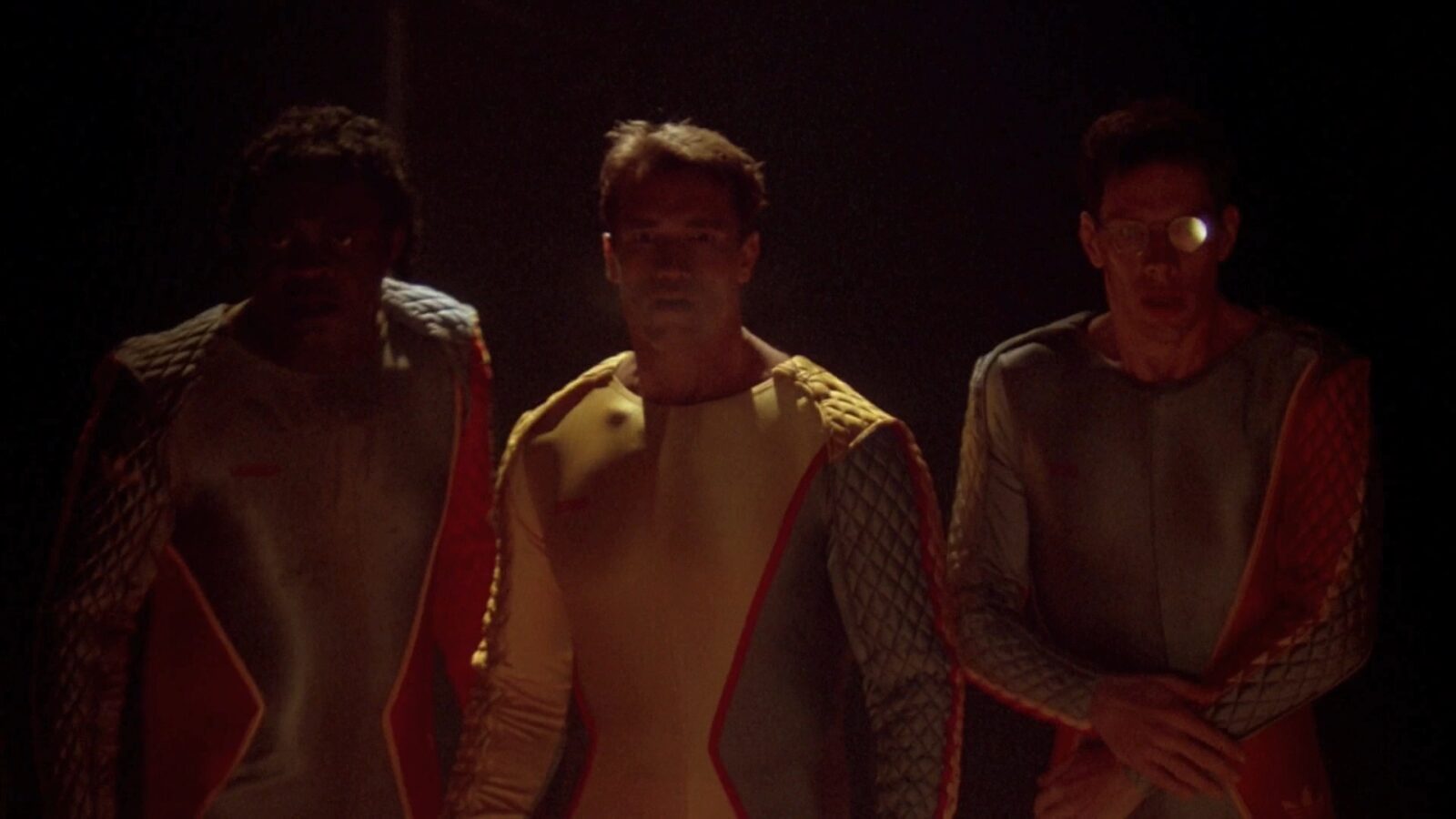 That’s the most relevant theme The Running Man presents to audiences today. Its dire warning of the civilization-wrecking allure of the Pop Cult, which props up the Death Cult’s rule, is more timely than at any point in American history.

Sadly for real-life dissidents, rousing the people from the Pop Cult’s spell takes much more than simply informing them of their rulers’ lies. It’s a long, slow process, and the first step to reclaiming your dignity is not giving money to people who hate you.