#3 in my Ranking of all Star Trek films.

The Next Generation‘s first solo adventure went a similar route to The Wrath of Khan. Eschewing the weird aspects of the previous film (including a very television B plot), they embraced the idea of a single adventure with multiple facets that feed into each other.

The Borg are heading for Earth, and the new Enterprise E’s crew is being held on the sidelines. Captain Picard, six years earlier, was captured and assimilated into the cybernetic collective before being rescued. His presence in an engagement with the Borg would present an “unstable element”, so they must patrol the Neutral Zone with the Romulans. The attack begins and Picard goes against orders to fly in and save the day. Except that the Borg have a plan B, going into Earth’s past to assimilate the population before they became such a threat. The Enterprise, of course, follows them, and we have our adventure. 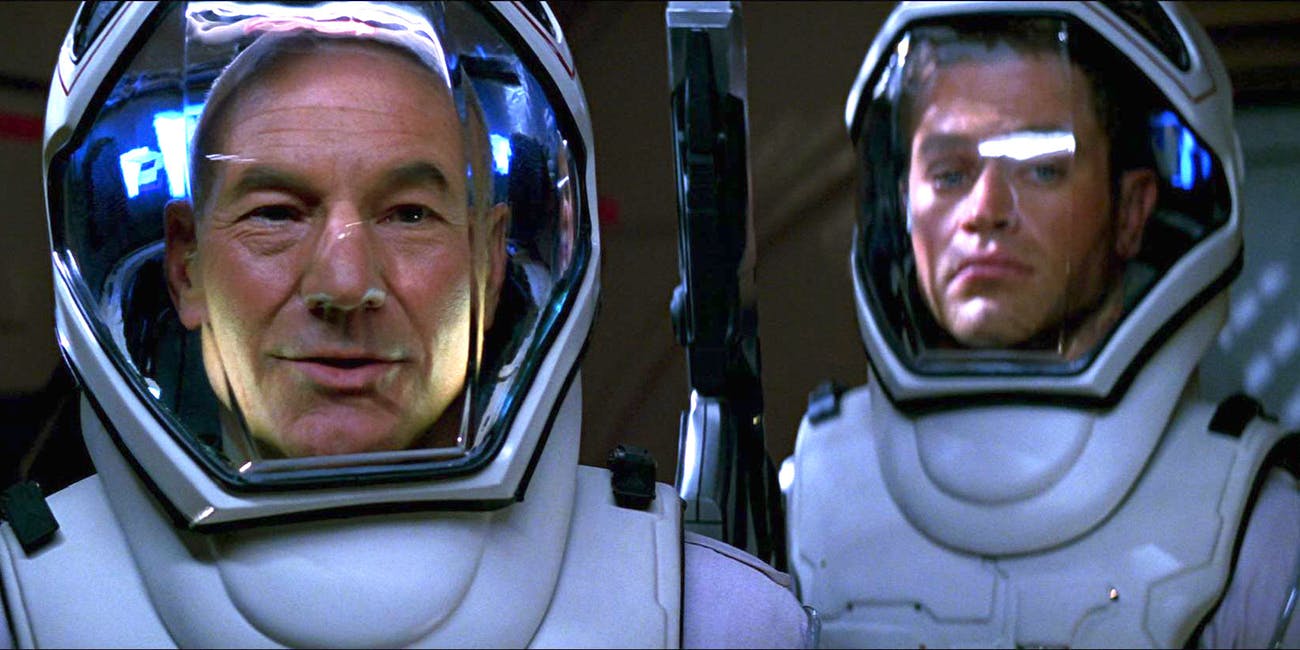 The story is built on a series of contradistinctions that make the whole film really interesting from beginning to end. Picard was assimilated by the Borg, which makes him the best person to fight them. The Borg try to assimilate the android, Data, but in order to do that they must go against their normal process. They normally take organic lifeforms and make them mechanical. With Data, they must take a mechanical man and make him more organic. Zephram Cochran, the man from the past who piloted humanity’s first faster than light vessel, is nothing like the history books have written him to be. And, the most interesting, Picard, the evolved man from the 24th century succumbs to a sensibility driven by little more than revenge.

Back in my review for The Undiscovered Country, I noted that the series has a literary streak that I really like. That continues in First Contact when Picard, near the end of his resistance to the Borg aboard his ship, quiets down after an outburst and quotes from Moby Dick. It’s the second movie in the franchise to directly quote from Melville’s masterpiece (the first being, of course, The Wrath of Khan), but the purpose is directly opposite to the first instance. Khan uses Ahab’s words as his final words in an effort to kill the object of his quarry. Picard uses a description of Ahab strapped to the white whales’ body as a moment of reflection to see where his vengeance will take him.

Listening to Ronald D. Moore, one of the writers of the movie, talk about Picard is really interesting. He seems to have found some of the restrictions of syndicated television limiting, especially in terms of character. You can only take a character so far in 44 minutes, especially when he has to be completely back to normal the very next episode. In a movie, though, you’re allowed to push characters further and even imply that they’re not the same at the end more forcefully. And that’s exactly what he did with Picard here. It’s the sort of thing that would have pissed of Gene Roddenberry if he had lived to see it. In Roddenberry’s mind, people essentially stopped being people in the 24th century. They weren’t prone to prejudices or notions of things so base as revenge. Moore disagreed and sent Picard down the rabbit hole, and it’s so satisfyingly done.

The contrast with Picard is Data. Data isn’t a man, but an android yearning to become more human. For a time, he’s tempted by the idea of becoming more physically human through the skin grafts that the Borg queen provides him (wherever did she find a bunch of human skin lying around?). In a sense, both Picard and Data are becoming more human through the experience of fighting the Borg. Picard embraces his more base instincts while Data learns physical sensation. 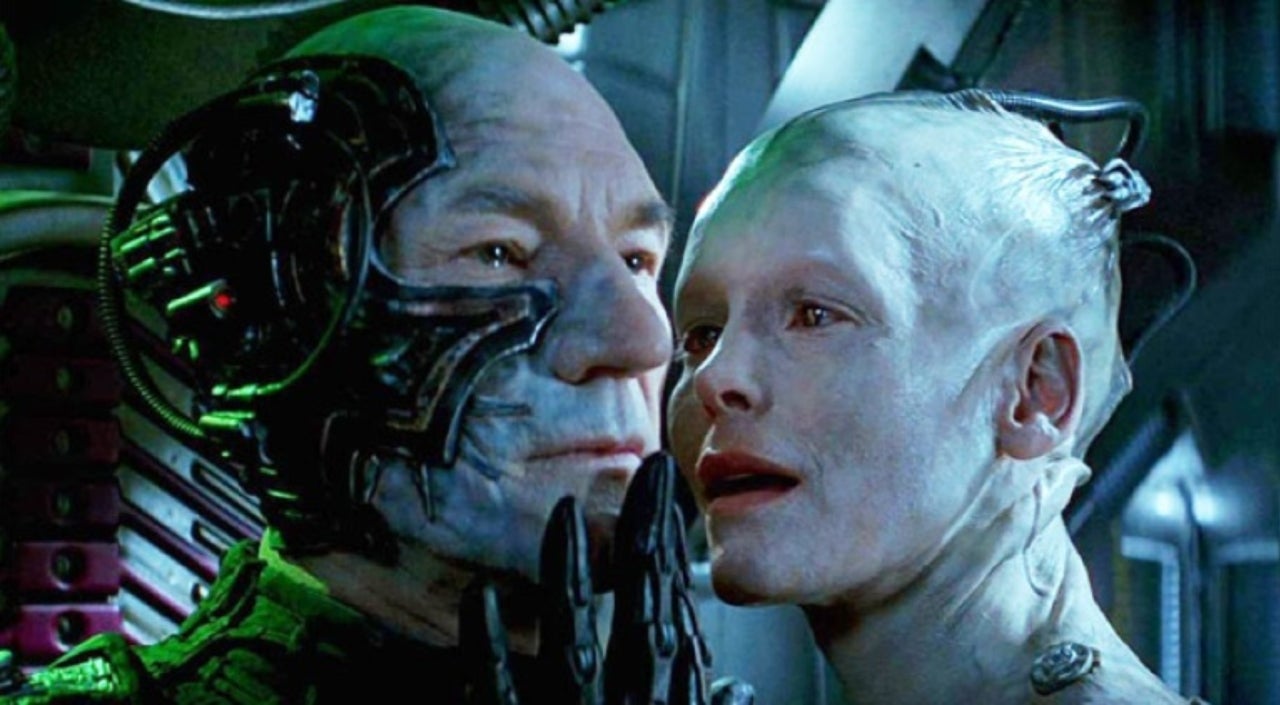 The B-plot in the movie, part of the crew remaining on Earth to help Zephram Cochran clean up from the Borg attack and launch his warp ship on time, is done much better than the B-plot in Generations. It actually has something to do with the plot on the ship, and it also acts as a thematic pair with Picard. As Picard becomes more like the people of the mid-21st century (angry, even cruel), we see Cochran learn of his own future, and he simply can’t believe it. The crew keep telling him about the statues, high schools, and text book chapters named after him. They quote speeches he’ll give in a decade. It all sounds like it’s about a completely different person than him, a drunk who hates flying and wants to retire to an island full of naked women. His experience with warp flight and the eventual first contact with the “good guy” alien race at the end of the film doesn’t make him a 24th century man, but it does put him on the path.

On top of that, the movie is the best looking movie since The Motion Picture. It’s the first movie since the first one that feels like it doesn’t have a compromised budget.

The only thing that I find frustrating about the movie is simply how much expository dialogue there is. Especially through the first half of the film, it feels like scene after scene of people explaining things to each other. It’s handled about as well as you can handle such scenes, so the exposition is less grating than in something like the Star Wars prequels. It still kind of grates on me, though.

Still, the movie has a series argument for being a top 3 of the entire franchise.

'Star Trek: Generations' Not as Good as I Remembered
Why Star Trek VI: The Undiscovered Country is My Favorite Trek Film
'Star Trek V: The Final Frontier' Isn't Quite as Blasphemous as I Recall
Retro Review: Star Trek IV: The Voyage Home is Totally 80s’ed Out
Star Trek III: The Second-Part of the Best Space Adventure Ever Put to Film
Michelle Yeoh's Star Trek 'Section 31' Spinoff Series Still in Works
Why Star Trek II is the Best Sequel to Any First Film in Any Genre