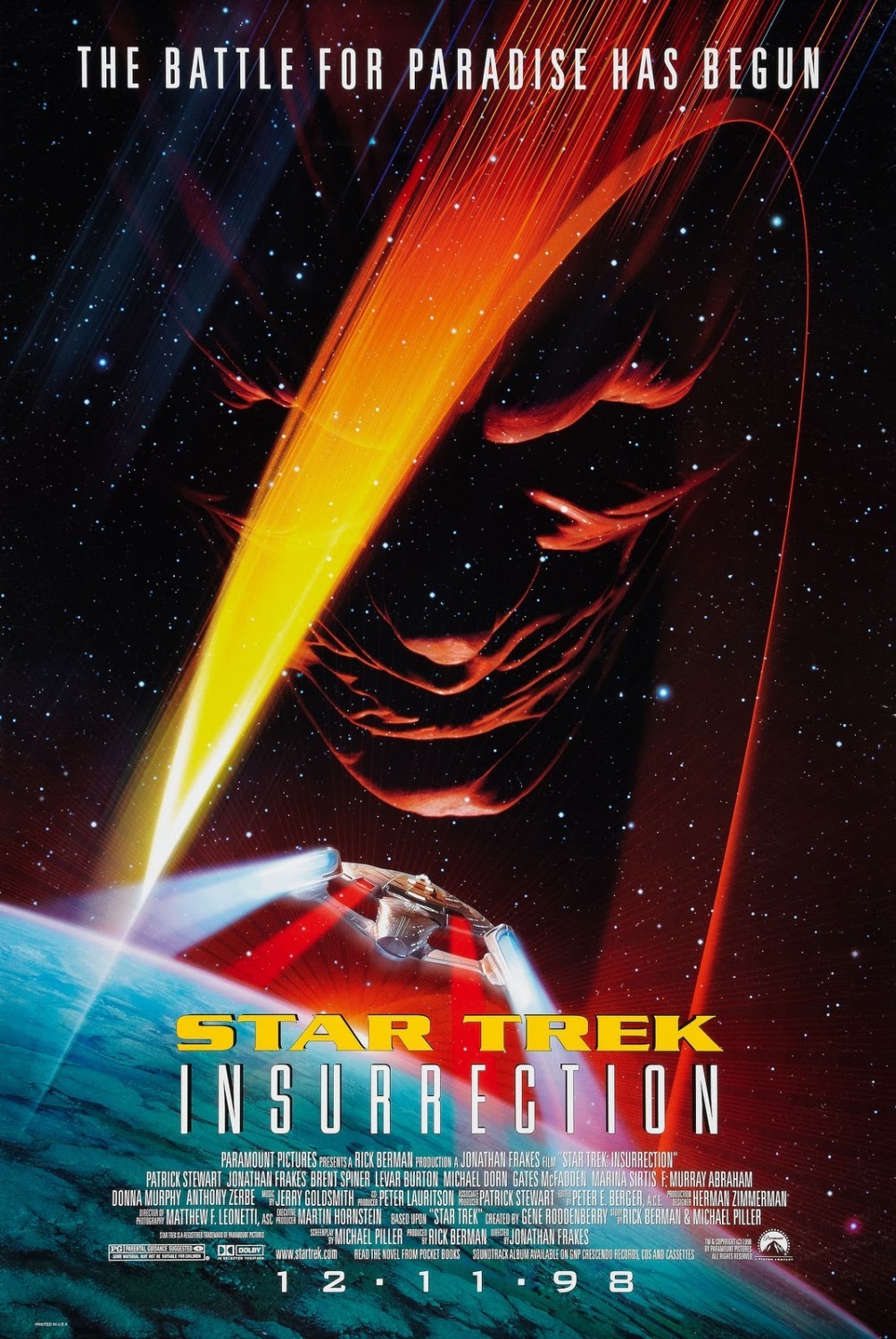 #13 in my Ranking of all Star Trek films.

So, upon this most recent rewatch, I started asking myself, “What’s the story to this movie? What’s the theme?”

Is it the Federation abandoning its principles in order to deal with a series of crises? Is it rebirth? Is it slowing down? Is it about generational conflict? Is it about forced resettlements? All five are ideas that receive center stage at some point in the film, and while they’re there, the ideas are really prominent. They squeeze out all of the others.

Essentially, my problem is the fact that the movie is very obviously a mishmash of different ideas. The screenwriter, Michael Piller, wrote a book about the writing of the movie that was never published (you can find pdf versions online). In it, he describes the series of notes he got from producers that forced the movie to morph in different ways, but the problem started much earlier than that. Piller began the writing process of Insurrection with two goals that were completely at odds with each other. 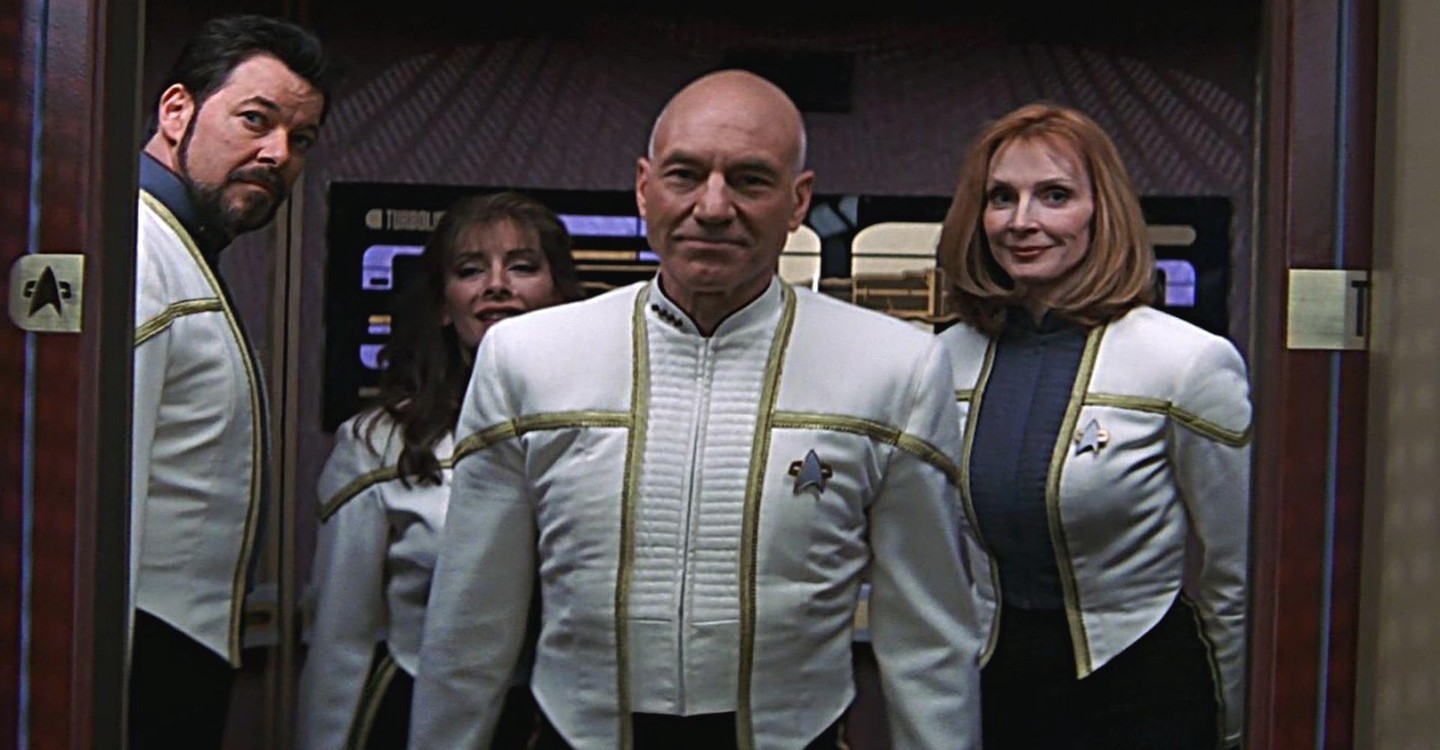 The first goal was to essentially adapt Joseph Conrad’s Heart of Darkness. The book about a man going deep into the heart of colonial Africa and finding the madness that drives Kurtz. Yeah, that one. The second goal was to make a more lighthearted movie after First Contact. Can you see how these two goals are completely at odds with each other? You can still see hints of the original idea in the final picture (Data going crazy at the beginning is definitely a holdover from the idea), but the movie does end up leaning pretty heavily on the lighter tone.

So, this script that was noted to death, it can’t be that bad, can it? It really is. The aforementioned jumble of themes that drown each other out and even conflict directly at times is just the most prominent that comes to mind for me. There’s also a massive problem with tone.

Even pushing aside the knowledge of the movie’s Conrad origins, the story we have is about the Federation surreptitiously planning on moving a population from their home in order to strip mine their planet. It’s not light stuff. And the movie jumps between these darker undertones and an intentionally lighter tone, especially regarding Data. Data’s story is as important to the core of the film as it was in Generations, which is to say you could have cut it out pretty cleanly. Data’s story is about him trying to befriend a little Baku boy and then learning how to play. He also has moments where, immediately after discovering some worrisome truths on the planet and a firefight, he uses his butt as a flotation device. The thing is all over the place.

The bouncing around of ideas and tones acts as a barrier to the audience actually getting involved in the story. But, let’s assume that we can get past that. We don’t care about theme, and we liked it when Data’s butt started floating in water cause it was kinda funny. What else is there?

Let me put it this way: The Baku are the most generic of alien races and feel like the sort of thing to write after a really good two-parter episode and you just need to fill an hour of television. Their costumes are bland. They don’t even look like aliens (going the cheapest of routes without even making a funny forehead piece). Their village is generic. They have some kind of ill-defined super power that sort of slows down time (maybe just the perception of it?). And, I actually hated them in my last viewing.

There’s an exchange about halfway through the film where Picard is talking to the leaders of the alien village about what to do regarding the threat. The male leader (I guess, their society is also really poorly defined) says something along the lines of, “We won’t pick up a weapon. The second we pick up a weapon we become one of them.” Hearing that, I would have written Picard’s response to be, “You won’t even defend yourselves? Why should I defend you, then? Picard to Admiral Doherty, I’ve accidentally found myself on the surface. Please beam me up. I’m ready to help take these worthless fecks of people off this planet.” Instead, Picard smiles sheepishly as though his embrace of self-protection is an embarrassment.

The special effects are also a serious step down from First Contact.

I really, really dislike this movie.