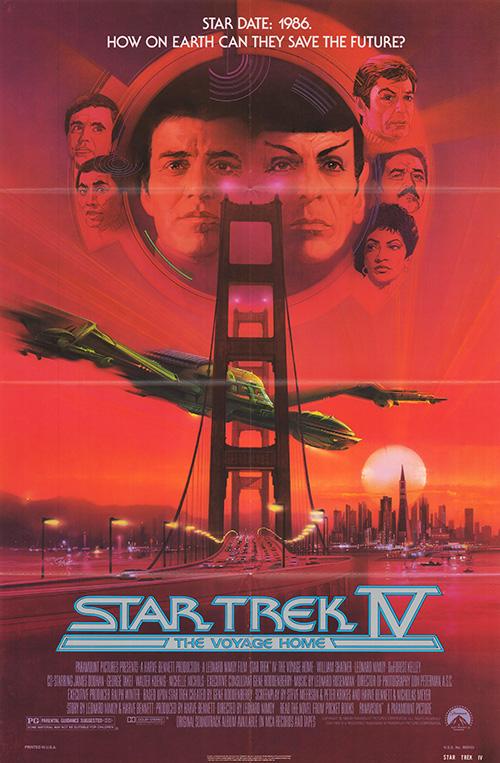 Here’s the crowd pleaser of the series. Here we have the easiest of the franchise to digest as a viewer, and it’s a surprisingly strong combination of goofy, earnest, serious, and joyful.

Many movies that try to balance that many tones end up with incoherent experiences, but Leonard Nimoy (directing), Harve Bennett, and Nicholas Meyer managed to deftly navigate through the different tones to tell a story that does contain all of those emotional beats but also in a way that creates a cohesive and entertaining experience. 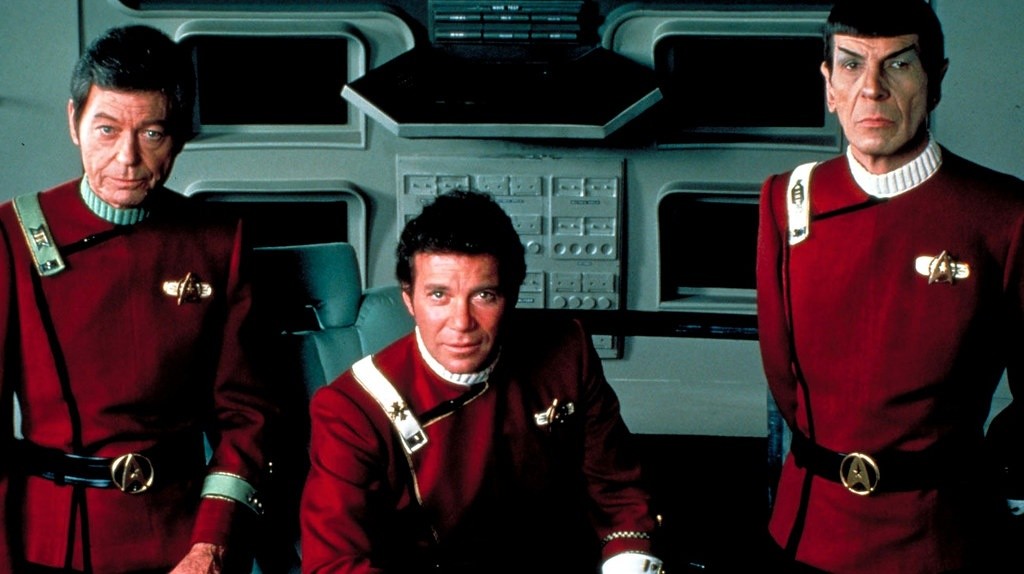 Picking up right where The Search for Spock left off, The Voyage Home finds our heroes on Vulcan with a newly reconstituted Spock, a high jacked Klingon Bird of Prey, and a certain court martial ahead. Being people of good character, they decide to face the music and head back to Earth. On the way, a probe (that looks a whole lot like the one described in Arthur C. Clarke’s Rendezvous with Rama) makes its way to Earth first, shutting down everything with power in its path and targeting the oceans of the planet in a way that causes massive storms to cover everything. The crew of the Enterprise (onboard their ship, the HMS Bounty), discern that the probe is trying to communicate with humpback whales, which had been extinct since the early 21st century. They time warp back in time to 1980s San Francisco where they try to find some appropriate humpbacks to return to the 23rd century.

Yeah, it’s goofy and wears its environmentalist heart on its sleeve, but because the movie doesn’t get bogged down in its message too often (there are a couple of moments that reek of Arthur C. Clarke “humanity is a child race” dismissiveness) and instead focuses on the fish out of water aspects of the journey, the movie ends up jumping along its ridiculous plot deftly. What we get is 23rd century sophisticates navigating our backwards times. Spock calling Jacqueline Susann (author of Valley of the Dolls) one of the “giants” of literature and Scotty talking to an 80s era Mac computer are both small examples of finding the humanist comedy in such a situation.

The plot honestly doesn’t matter very much. They find whales in the Cetacean Institute (actually the Monterey Bay Aquarium in Monterey, California). One is male and the other is a very pregnant female. One of the administrative heads of the aquarium loves whales and hard luck cases and grows close to Kirk, providing him with key information. This all happens while the rest of the ship’s crew looks for nuclear power to science the dilithium crystals back into shape. Of course, they find the aircraft carrier the Enterprise laying in dock in the bay for just that extra oomph of poetic license. Chekov gets hurt and sent to a hospital where the modern day doctors want to drill holes in his head much to the horror of 23rd century physician Leonard McCoy.

It’s really quite the light entertainment, and it succeeds quite well. I prefer the serious attempt at awe in The Motion Picture, the ruthless focus on storytelling from The Wrath of Khan, and the historical intelligence of The Undiscovered Country, but The Voyage Home is just solid fun.