After the two-part tour de force of The Wrath of Khan and The Search for Spock, the challenge of producing a fourth film to top the second and third seemed insurmountable.

And as things turned out, it was.

That’s not to hate on Star Trek IV: The Voyage Home. It is to say that the film makers’ prior success had placed them in a creative Kobayashi Maru scenario.

To wit, they could stay on the dramatic track they’d been on and invite audience burnout. Or, they could go in a different direction and risk displeasing their fanbase.

In the end, writer/director Leonard Nimoy and writer/producer Harve Bennett chose to split the difference in what may have been the strangest way possible.

Let’s get the usual nitpicks out of the way up front. The Voyage Home is the first Star Trek movie that …

TVH also meets half of the “man going into his backyard and doing nothing” description of realist fiction.

But even though most of the movie takes place in Hollywood’s backyard, what the cast does there amounts to far more than “nothing.”

I’ll be honest with you. Watching this movie again gave me a pretty severe case of cognitive dissonance.

Based on memories of my last viewing, I expected to dislike it. But I kept finding myself chuckling at several scenes like someone whose corpus callossum has been severed.

First of all, you have to understand that his movie is totally 80s’ed out.

They basically sent a crew out on the street to film scenes in 1986 San Francisco. And that’s just what the movie looks like.

But if you’re a member of Generation Y, that footage is good for a nostalgia trip.

There’s just no getting around the main plot, though.

Because that’s where the writers first went back to the well, and in so doing they made the questionable choice to reuse the plot from Star Trek: The Motion Picture.

Viz. a giant alien probe is headed for Earth in a visitation that threatens to destroy all life on the planet unless Kirk & Co. can signal it with a message from the 20th century.

Only this time instead of sending the Voyager probe’s transmit code, they’ve got to get whales to sing to it.

A long-running joke goes that the plot synopsis for every piece of speculative fiction sounds dumb. But it’s true in the most literal sense here. There is no way not to make that plot description cringeworthy.

The fact that TVH does in fact manage to be entertaining is a point in favor of the execution-over-ideas crowd.

It’s the “Save the whales!” message that comes off as this movie’s most dated element, though. Because the whales have in fact been saved.

That’s good news for the whales and bad news for this film’s continuity and sense of urgency.

Don’t get the wrong idea. TVH is preachy, but in that cockeyed 80s ex-hippie way that predates malignant wokeness.

Saving the whales was, after all, a worthy cause for man to champion as steward of creation.

And it made a heck of a lot more sense than reducing America’s standard of living to third world levels to change the weather or lobbying for state-enforced child grooming.

Besides, the repeated use of “Man” to mean “humanity” would suffice to get this movie on the Death Cult’s naughty list were it released today. So there’s that.

I don’t know. It just seems weird to have a Star Trek movie that doesn’t feature the Enterprise.

It’s like setting a Gilligan’s Island movie in New York with the island only shown in a flashback.

For the sticklers out there, yes, I realize that the Enterprise does appear in this film.

Three Enterprises do, to be precise:

But a good amount of the action is set aboard the CVN-65: 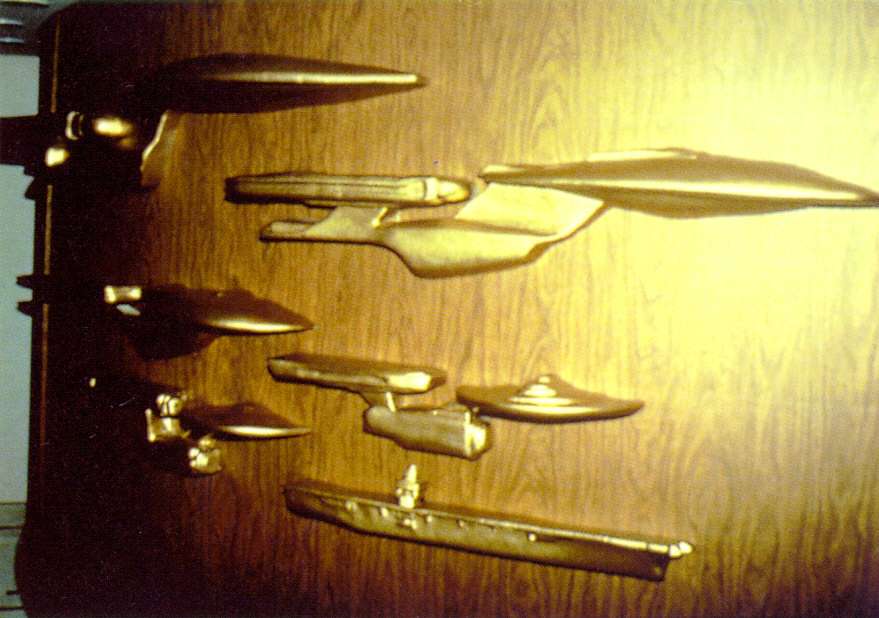 Because the aircraft carrier USS Enterprise appears on the Enterprise D’s observation lounge wall alongside the starships of that name, I’m counting it as a canonical Star Trek vessel and giving TVH points for using the Enterprise as a setting.

It’s clever to be sure, but not quite the same.

There are some pivotal scenes, though.

Like the Klingon ambassador’s rant against Kirk that sets up his government’s enmity toward him (which pays off in Star Trek VI), the last appearance of Saavik, and the Eyeglass Loop Paradox.

But the whole denouement deserves a thorough examination.

First we have the trial of James T. Kirk. He’s charged with nine violations of Starfleet regulations – all of which equate to major felonies.

As touched upon in our SfS review, Kirk’s crimes include assaulting Starfleet officers and stealing and destroying the Enterprise. 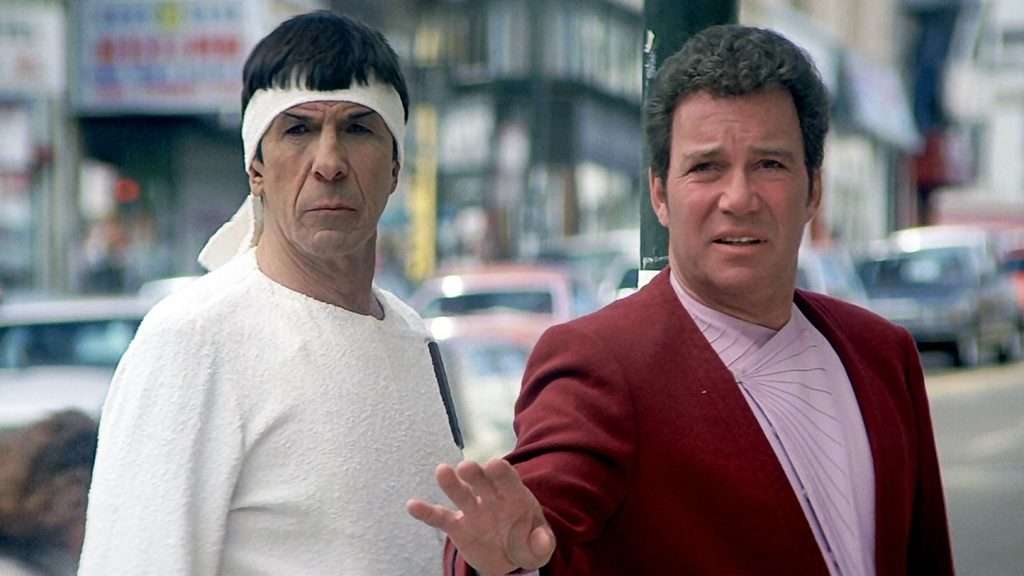 Yet both goals are interesting. And the latter shows how honorable Kirk and his officers are. They knew the consequences of their actions in SfS, and the sequel maintains their characterization while holding them to the price they had to pay for Spock’s resurrection.

But then the ending takes the ball the series had been carrying since the previous movie and drops it by letting Kirk and friends off the hook.

Military law specialists should feel free to correct me here. But I’m pretty sure an admiral who stole and scuttled a heavy cruiser wouldn’t get off with a demotion to captain – regardless of whether he, say, averted World War III in the process.

Even if he avoided serious jail time, it seems still less likely he’d be given another command. If the court wanted to be diplomatic, that would be a good time to say, “You saved the world, so take early retirement with your full pension and benefits. We insist.”

But because the studio wanted to keep the series going, they had the Federation give Kirk another Enterprise.

I’d find that resolution easier to swallow if they’d at least made it interesting.

This is the only time you’ll hear me say it, but Sulu was right. They should have given Kirk and his crew the Excelsior. That would have tied together all kinds of thematic threads

The Excelsior was an alternate design for the refitted Enterprise to begin with. Sulu ends up commanding it in part VI, and the Enterprise B is revealed to be an Excelsior-class in Generations.

Even better, posting the former Enterprise crew to Excelsior would be an ironic punishment since Scotty hated the latter. And sabotaging her was one of the charges against him and Kirk. She’d have been a 2.35 million ton albatross they’d have to wear around their necks every day.

Even more better, Starfleet could have renamed Excelsior to Enterprise and spared us the confusion of having two Constitution-class Enterprises.

Enough geekery. On to one thing this movie’s ending does exactly right …

One major plot thread that Search for Spock leaves hanging is Sarek’s arc. He’s the one who provides the inciting incident by going to Kirk for help getting his son back.

Yet he’s never reunited with Spock in Star Trek III.

Star Trek IV resolves that oversight with a father-and-son reunion scene between Sarek and Spock that manages to be touching despite lacking outward emotion. 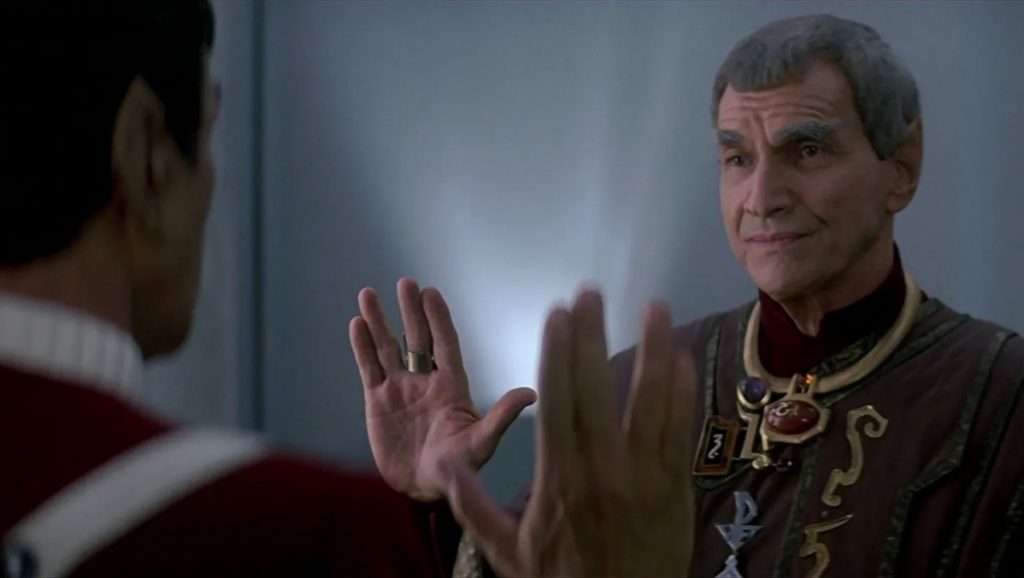 It also sets up one of the best moments from TNG:

So The Voyage Home ends on a high note.

But it signals the start of the period when Trek’s principal actors moved behind the camera and started to get self-indulgent.

Though TVH can’t hold a candle in that regard to Shatner’s turn in the director’s chair.

But for my take on the much-maligned Star Trek V, you’ll have to wait till next time.

For another tale of a crew stealing a spaceship to undertake a metaphysical quest, read my acclaimed first novel: 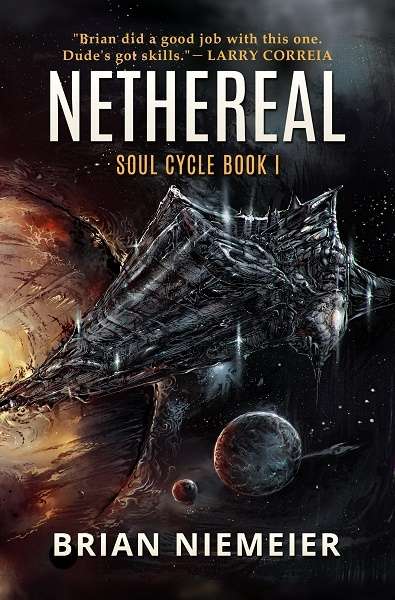 Watch: Trailer for Third & Final Season of 'Picard' on Paramount+
'Star Trek: Generations' Not as Good as I Remembered
Prime Video Surpasses Netflix in the U.S. Streaming Market
Why Star Trek VI: The Undiscovered Country is My Favorite Trek Film
'Star Trek V: The Final Frontier' Isn't Quite as Blasphemous as I Recall
Star Trek III: The Second-Part of the Best Space Adventure Ever Put to Film
Michelle Yeoh's Star Trek 'Section 31' Spinoff Series Still in Works