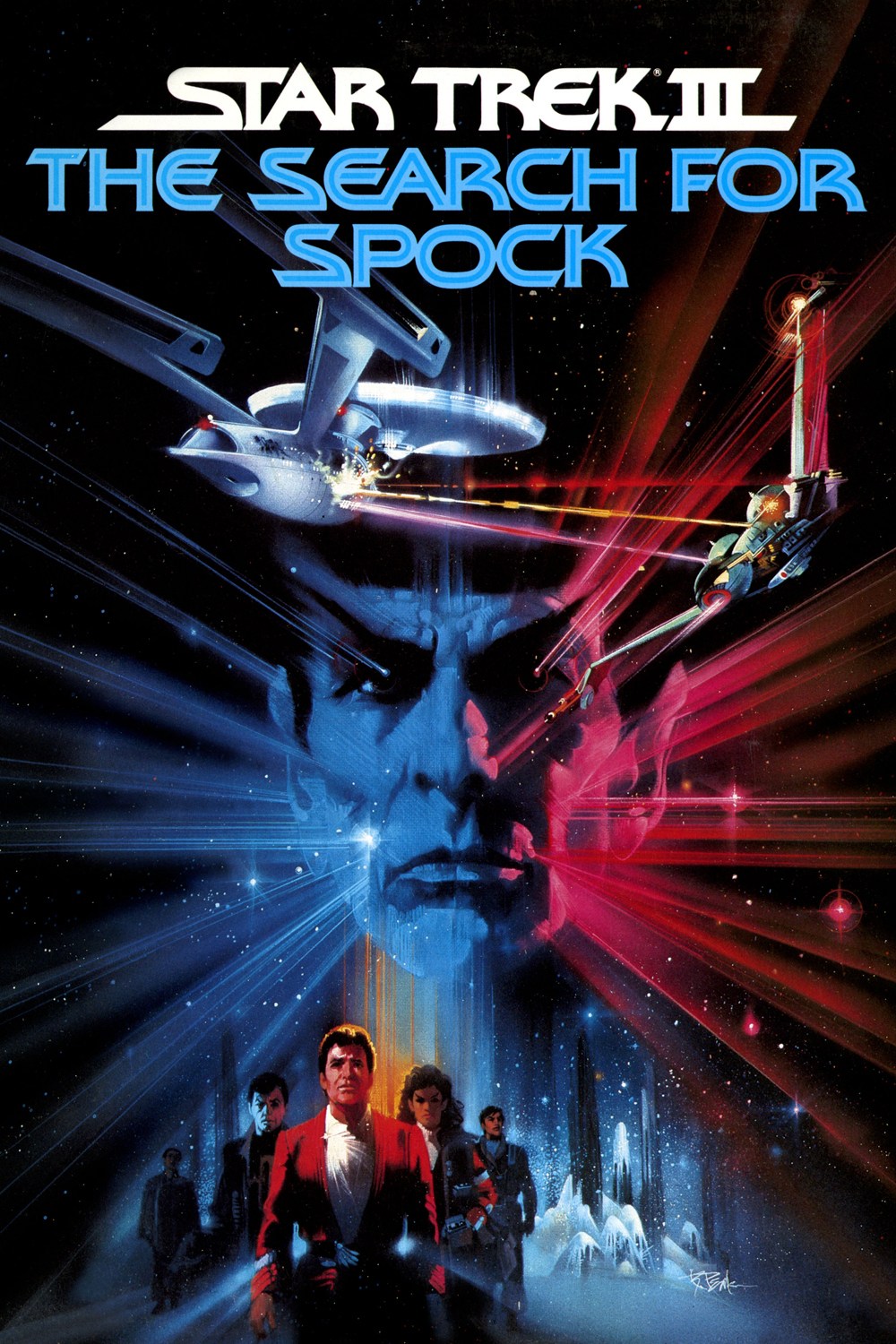 #3 in my Ranking of all Star Trek films.

How does one follow a film with a fantastic villain, perfect structure, and really good special effects? Muddy the waters, apparently.

Don’t get me wrong. I feel like the third Star Trek film is good, but it’s also got problems.

So, let’s start with the good. The Enterprise is coming home from the Mutara system, wounded with one less officer. There’s no sense of victory as the ship tracks into spacedock where its wounds get pushed into a harsh light. Captain Kirk dismisses a cadet’s desire for a celebration by referring to paying for their return with their dearest blood. And, on top of it, McCoy is acting odd. He breaks into Spock’s sealed quarters and talks of a need to go to Vulcan. Spock’s father, the Vulcan ambassador Sarek, tells Kirk of the need to bring Spock’s katra, his soul, back to Vulcan, or his essence will die forever.

Kirk must get Spock’s body back from the Genesis planet where they shot his body, but Starfleet won’t allow it. The Genesis planet is at the center of a galactic controversy and has been declared forbidden.

All of this first act up to this point is a bit clunkier than it should be, but it’s effective at getting the point across. And then we get to one of my two favorite individual sequences in all of the Star Trek movies (both of which are in this one, actually):

There are a few things in that sequence that get me. First is the music. James Horner did a bang up job for the previous film, and Nimoy, the director, brought him back to score this. Here, Horner explores the musical themes he created in the second film and gives them greater scope and a larger breadth. The second is the action itself. Much like in the second film, there’s an understanding of the limitations of what the models can do, and turning a slow chase out of a dock into something really exciting through the editing is a solid accomplishment. The third is about Kirk. Kirk knows that what he’s doing is going to ruin his career, but he has to do it because his friends need him. He’s not doing this because he expects to get Spock back, but he does know that Spock’s soul is hurting McCoy and needs to find a place to rest. When the captain of the Excelsior tells him that he’ll never sit in a captain’s chair again, Kirk’s face doesn’t move. That may be a coincidence of editing, an accident more than anything else, but it’s also effective. Kirk’s face doesn’t move in a way that suggests he knows what the Excelsior’s captain is telling him is the truth and that he’s still willing to go through with the action anyway. He understands the consequences of his actions, and he’s sill stalwart. It’s such a fantastic moment.

Before I go any further, I’m going to address the single largest problem with the film: Christopher Lloyd’s Klingon, Kruge. Taken in a vacuum, Kruge is actually a pretty good Klingon. The way he strangles a giant space worm with his bare hands, picks up his communicator, and tells his ship that nothing’s going on is just perfect. The problem, though, is that he feels like a missing subplot from The Wrath of Khan rather than a natural element in The Search for Spock. He doesn’t fit thematically. The theme of the film is about rebirth and creating second chances, while Kruge is having an argument that he missed out on with Khan. He feels like a puzzle piece in the wrong puzzle.

Anyway, the movie continues to the point that Kruge overpowers the weakened Enterprise and sends most of his men onboard in order to commandeer. That’s when we get to my other favorite moment in the Star Trek film series:

The self-destruct sequence became such a cliché after this, but it never meant anything because they all got aborted or reversed somehow. Here we have the self-destruct go all the way through, and the destruction of the ship is beautiful. I love how the saucer section essentially melts away, tearing apart the letters of the timeless ship before exploding and falling into the atmosphere of the Genesis planet and turning into nothing more than a ball of flame. There’s something permanent and meaningful about that action.

The movie’s final action beats are weaker, though. A fist fight in an exploding environment (with some dodgy compositions with the special effects) between our main character and a bad guy from another movie just feels a bit unsatisfactory.

The Vulcan mysticism of the final few minutes of the movie hints at a larger culture that I really enjoy as well. Vulcans, driven by logic, also hang on ceremony in extremely focused ways.

Amidst all of this action, I think we have Shatner’s best performance in a Star Trek movie. His reaction to hearing his son die, where he simply falls to the ground instead of into his chair, is great. DeForest Kelley is very good as the confused and angry version of Bones. Lloyd is solid as the bad guy from another movie.

Overall, I do think the movie is solidly good, but it had the capability of being something great. Rewriting Kruge so he actually fit in thematically would have helped, I’m sure. Upping the production and special effects budget a bit so that the effects weren’t such a mixed bag would have done good things as well. Still, as a follow up to what is arguably the best Star Trek movie, they could have done far, far worse.

'Star Trek: Generations' Not as Good as I Remembered
'Star Trek V: The Final Frontier' Isn't Quite as Blasphemous as I Recall
Retro Review: Star Trek IV: The Voyage Home is Totally 80s’ed Out
Star Trek III: The Second-Part of the Best Space Adventure Ever Put to Film
Why Star Trek II is the Best Sequel to Any First Film in Any Genre
Retro Review: Why 'Star Trek the Motion Picture' is Not That Bad
The Mandalorian Season Three Sets Its Disney+ Premiere Date