Retro Review: Spoiling The Village Troll of ‘The Village’ (2006) 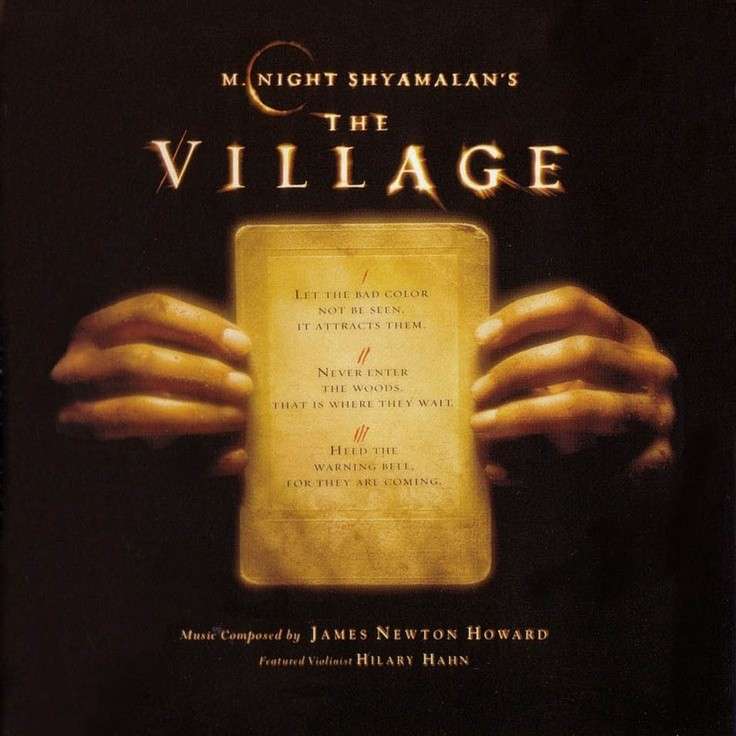 My recent reviews of M. Night Shyamalan’s Eastrail 177 Trilogy sparked a discussion of the controversial director’s other films on and off this blog. One movie in his catalogue that proved more contentious than most was 2004’s period thriller The Village.

On the meta level, The Village is noteworthy because it marks the point when general audiences started to turn against Shyamalan. After getting four movies in a row with twist endings, moviegoers began to question whether the golden boy had any other tricks in his tool box.

The Village has always had its defenders, though. I readily admit to being one of them. True, I wasn’t crazy about what I thought was the twist ending at the time, but the cinematography, performances, costuming, and score worked so well that the finale didn’t spoil my good time.

Last week, I revisited The Village for the first time since I saw it in theaters. And I noticed an apparent discrepancy that inclined me to wonder if the critics haven’t been missing something for years, and Shyamalan has successfully pulled one of the greatest cinematic trolls of all time.

We’ll exhume the movie for a new autopsy in a moment. First let it be known that there is no in-depth discussion of any M. Night Shyamalan film without spoilers. If you haven’t seen The Village, proceed at your own risk.

Though it’s not the risk everybody led you to believe it is. 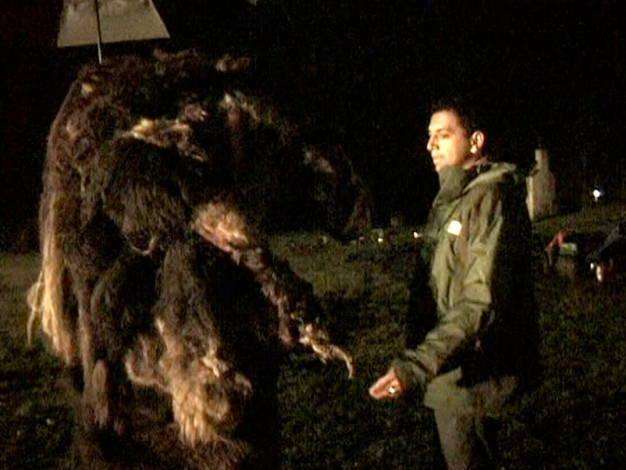 Only one storm cloud darkens the village’s doorstep: the tribe of flesh-eating monsters dwelling in the surrounding woods known only as Those We Don’t Speak Of.

The village elders, foremost among them Ivy’s father, tell everyone not to worry about the clawed, fanged monstrosities surrounding them. You see, the first settlers who founded Covington cut a deal with the creatures–a sort of mutual nonaggression pact. The terms are simple: The villagers don’t go into the creatures’ woods, and the creatures don’t cross the village’s borders. Good fences make good neighbors.

Problems arise when Lucius, moved by a young boy’s death from illness, starts lobbying the elders to let him venture back to civilization and bring back medicine. Lucius has learned that his mentally retarded friend Noah has entered the woods and returned unharmed. He reasons that the creatures will let the pure of heart pass unmolested, and his purpose is pure.

The elders dig in their heels and deny Lucius’ persistent requests. In the meantime, he strikes up a budding romance with Ivy, who went blind at a young age. But not even pointing out that Ivy’s sight may have been saved if she’d had access to the latest medical advances moves her father to change his mind. No one from the village goes into the woods, period.

Mr. Walker’s stance is vindicated when skinned animals turn up in the fields. This grisly calling card foreshadows a night raid on Covington by the creatures. No one is hurt, but the villagers emerge from their cellars to find their doors marked with crimson–the “bad color” associated with the creatures.

The attack quells talk of venturing to the towns beyond the woods. Lucius and Ivy announce their intent to marry. Skinned livestock continues showing up, despite the elders’ peace offering to the creatures. The rising tension snaps when Noah stabs Lucius out of jealousy, proving his heart isn’t so pure after all.

With Lucius dying of his infected wounds, the elders reluctantly agree to let blind Ivy make the perilous trip through the woods to town in the hope of saving her beloved. Before she sets out on her quest, her father privately reveals a terrible secret.

Her whole world shaken, Ivy leaves the village and enters the forbidden woods. Both companions charged with escorting her to the road soon forsake her. Freezing rain, darkness, and loneliness assail her. Yet Ivy presses on.

But she’s not as alone as she thought, and that chilling fact soon dawns on her.

Here is where Shyamalan reveals what many take to be the movie’s twist. In a flashback to the hours before her departure, we see Ivy’s father showing her a shed full of monstrous costumes. Those We Don’t Speak Of were fabrications all along–bogeymen cooked up by the elders to keep the villagers from leaving.

That’s not the only surprise Shyamalan has in store. As she’s stalked by something unseen, Ivy recalls her father’s admission that he based Those We Don’t Speak Of on old legends of strange creatures in the woods. Here we have a classic misdirection that casts doubt on the first twist.

It turns out that Ivy really is being followed. One of the monsters she was raised to fear rushes her, and she tricks it into falling to its death. Shyamalan then pulls a double reversal: Ivy’s stalker was Noah in a stolen creature costume.

Ivy makes it out of the woods, and the audience gets another surprise. Covington lies at the heart of a modern-day game preserve. The entire village is a well-meant ruse devised by the elders, each of whom lost a loved one to the rampant disorder of the urban hive, to spare their children the corruption of Clown World.

The main theme of The Village was white flight all along. This plot is so based and red pilled, I have to believe it motivated Disney to give Shyamalan the Barton Fink talk and put him in career time-out until he got with the Cult’s program.

But not even that stunning turn is the masterful troll I referred to at the start of this post.

I’m convinced that the double reversal is really a triple reversal deliberately hatched by Shyamalan to thumb his nose at critics.

And befitting a master of the visual language of film, the director left pictorial evidence.

Here’s what Those We Don’t Speak Of look like in the movie: 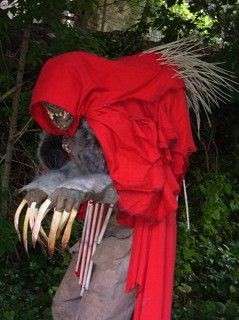 This picture shows the general appearance of the creatures that raid the village, the costumes Mr. Walker shows Ivy, and the costume Noah steals. Note the long claws, porcupine quills, boar tusks, and most importantly, the cloak dyed the “bad color”.

This is the rock painting which Lucius states, and which the elders don’t deny, depicts the creatures in the woods: 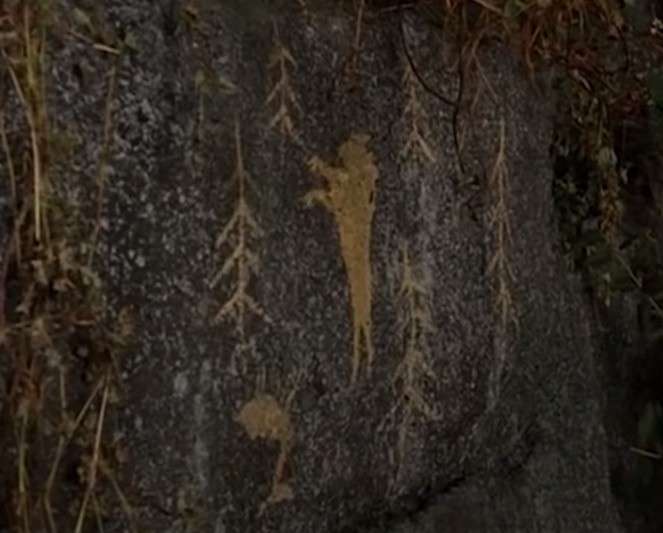 It doesn’t match at all. The painting more closely resembles a bear or lion rearing up on its hind legs than a clearly bipedal sloth-hedgehog-pig-thing.

And in telling contrast to the fake monsters, the creature on the rock is entirely rendered in the “safe color” used to ward off Those We Don’t Speak Of.

The pit where Noah falls to his death: 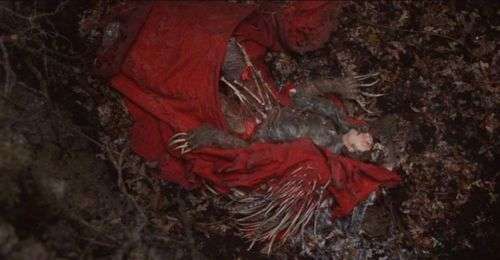 Ivy almost falls into the hole herself while she’s being stalked by a hidden presence in the woods. Later, when Noah chases her in the creature costume, she runs back to the pit and jumps aside at the last second. He falls for the trap, with lethal consequences.

This sequence of events raises the question: If Noah was tailing Ivy all along and saw her slip into the same hole, why did he run headlong into it a couple minutes later?

No use pointing to his mental disability. He’d proved spatially aware enough to come and go from the woods undetected multiple times; catch wild animals, skin them, and leave them around the village without getting caught; and break out of a locked room with a stolen costume. He also shanked the strongest guy around. Noah might be a bit dim and have trouble regulating his emotions, but he’s quick on his feet and cunning.

The logical conclusion is that it wasn’t Noah watching Ivy from hiding when she had her near-fatal brush with the pit.

But then who or what was it?

Ivy’s ears playing tricks on her? Highly unlikely to the point of undermining her character if true. Ivy’s been blind since childhood. The movie establishes her other senses–particularly her hearing–as especially keen to compensate. Logically she’d be more likely than a sighted person to sense a stalker hiding from sight.

Something was following Ivy in the woods. It wasn’t Noah. Again, what was it?

This production still gives us a pretty big clue: 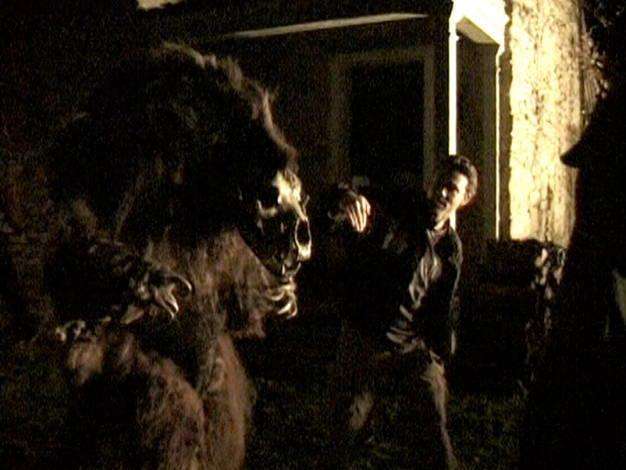 That’s an official creature costume from The Village. It is clearly not, however, one of Those We Don’t Speak Of. 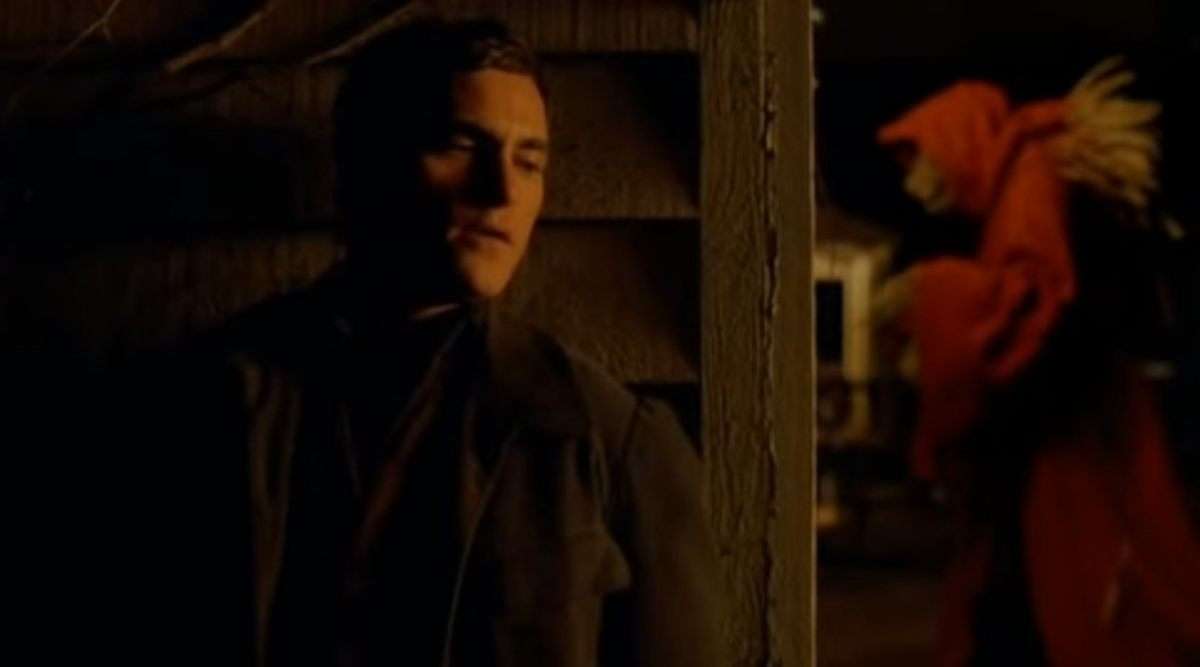 Which means there were two different kinds of monsters in The Village.

Two pieces of behind-the-scenes trivia from the film’s production shed light on this dichotomy. The original script for The Village was leaked months before release. As the story goes, Shyamalan reshot the ending to head off internet-spread spoilers. Some account for the two sets of monster costumes with the explanation that Shyamalan found the originals unconvincing and had his costume department replace them with the quilled, red-cloaked versions we see on film.

I submit a modified theory. Shyamalan took advantage of the reshoots necessitated by the script leak–he may have leaked it himself–to confound his critics. The leaks already had them complaining about the twist ending, so he did what skilled craftsmen have always done: He worked discarded material back into the finished product to create a secret twist.

It turns out there were real monsters after all. These were the beasts from the old legends that inspired Walker, and which the Indians who’d preceded the white settlers painted on rocks.

Shyamalan is known for using color to convey meaning in his films. So meticulous a director wouldn’t leave frames of creatures painted in the safe color by accident. What this detail tells us is that the real creatures aren’t dangerous predators. Instead, they’re elusive, retiring beasts much like popular depictions of Bigfoot.

Would a man as concerned for his family’s safety as Walker move from the urban jungle to the middle of woods infested with man-eating monsters?

Again, not without undercutting his whole character.

It’s much more fun to think that Shyamalan baited his critics into griping about The Village‘s twist–Roger Ebert placed it on his Ten Most Hated list–as a setup for the real twist, which is a 180 degree subversion of what critics mistakenly believed.

And he’s kept it as his own private joke for sixteen years.

If you’d like to pull that kind of galaxy brain head trip on your readers, hire me to edit your book.