Any movie that opens with former Liverpool striker Stan Collymore being given ‘executive relief’ by Sharon Stone’s Catherine Tramell whilst speeding in an out-of-control Spyker C8 Laviolette isn’t exactly aiming at an art-house audience. Tramell is now knocking out her trashy crime thrillers in London, having relocated from San Francisco after the events of the first picture and the untimely ice-pick facilitated demise of v-neck sweater (sans shirt of course) enthusiast detective Nick ‘Shooter’ Curran (Michael Douglas). 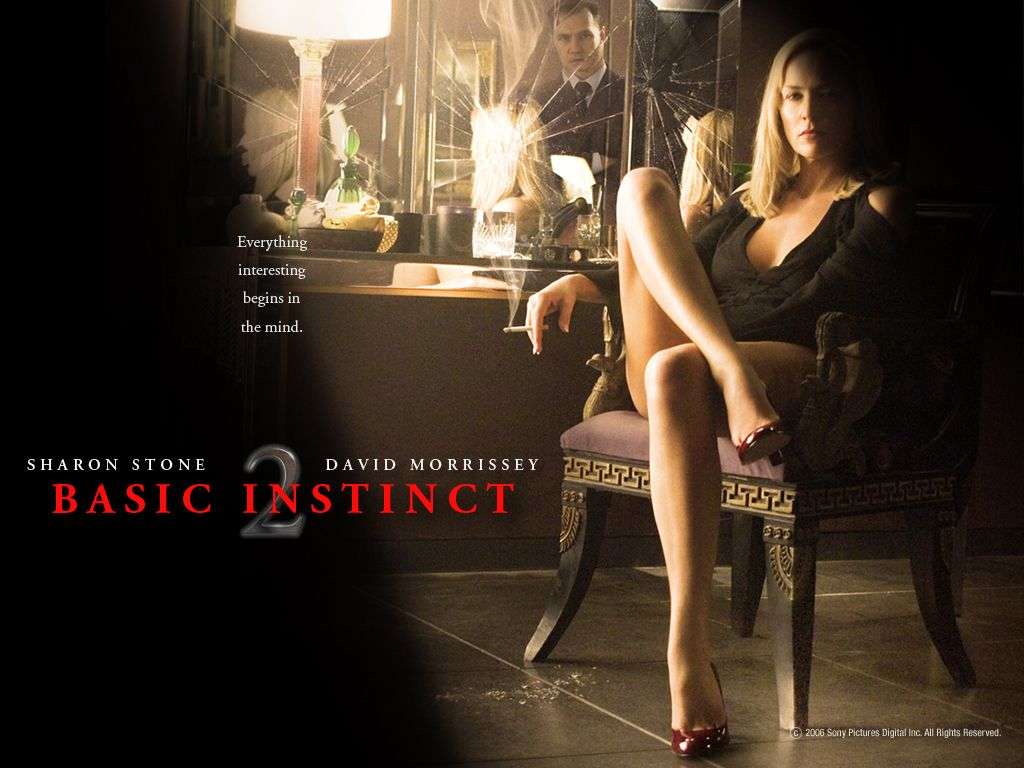 She has also moved on from her previous favourite combo of cocaine and Jack Daniels to D-Tubocurarine (DTC), supplied by a dealer who labours under the name (I kid you not) of ‘Dicky Pep’. Great writing there from the team of Leora Barish and Henry (Internal Affairs) Bean. The plot lurches all over the place like Cary Grant’s drunken driving in Hitchcock’s North by Northwest (1959) with the usual McGuffins, blind alleys and general f*ckwittedness.

The supporting cast of Brits look like they’ve wandered in from an episode of Waking the Dead (or Brookside) with an obviously slumming it David Morrisey playing expert shrink Dr. Michael Glass who ‘suspects’ that Tramell is a narcissist, with no concept of right and wrong.

If ever the phrase ‘No shit Sherlock’ was apt…

After the dog’s breakfast that was The Island of Dr Moreau (1996), an either skint or masochistic David Thewlis laps up another serving of piping-hot crap, essaying the role of gormless Welsh Detective Superintendent Roy Washburn.

Stone vamps her way through the movie, with the air of someone who knows her career is mirroring the opening scene’s dive into the murky waters of the Thames.

To his eternal shame, Michael Caton-Jones directed this hot mess, a far cry from his excellent work on Rob Roy (1995) and the TV series Brond (1987).

A wee whiff of quim in the morning
Brond part 1

Still, if you watch the picture with a few drinks inside you, it can work as a wacky romp, with the theme from Benny Hill playing over the action.

Incidentally, Trammell’s new crime thriller she’s writing in the movie is called The Analyst, perhaps Therapist would have been more in keeping with the general tone?

PS: the late poet Heathcote Williams appeared in Basic Instinct 2 as Dr Jakob Gerst. Williams was the foreign minister for the so-called independent republic of Frestonia in West London and set fire to himself when demonstrating fire-eating in front of then girlfriend, model Jean Shrimpton.

The poet was idolised by Al Pacino, who financed (with crazy Jon Voight) and starred in a film adaptation of Heathcote Williams’ The Local Stigmatic in 1990. Terrible accent Al. Co-starring the bloke from CSI and the guy from Seinfeld with the dog.