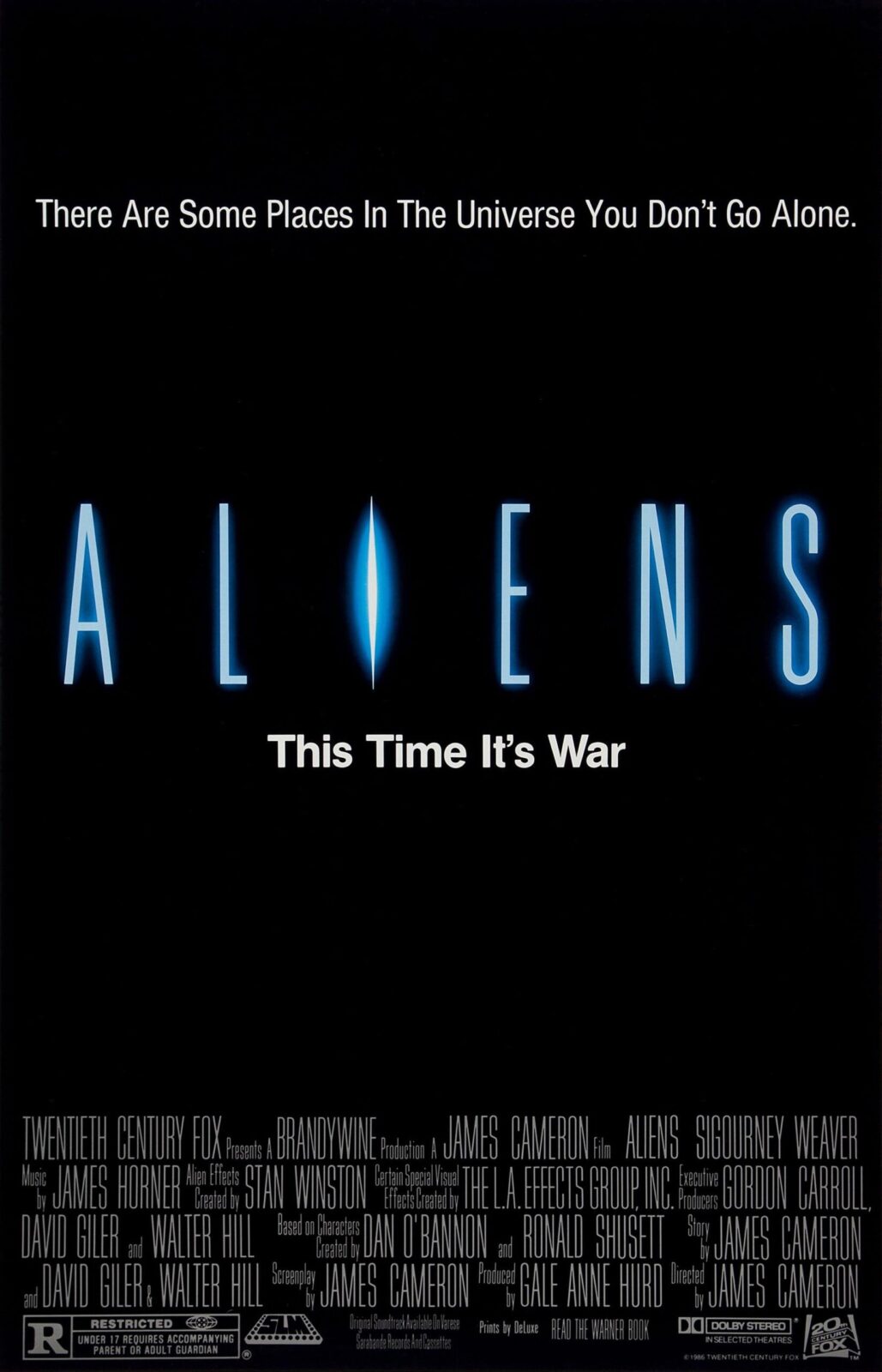 #2 in my Ranking of the Alien Franchise.

There are several ways to approach making a sequel to a successful genre film. One of them is “bigger is better”. James Cameron’s 1986 Aliens might be the textbook example of how to do that.

The movie follows so many of the same basic plot points and character models as the first that it could almost be called a remake. A group of working class people land on LV-426 where they are attacked by aliens, killing everyone but a few. The few fight back, thinking they’ve succeeded before a final fight erupts on the escape ship. Having won, everyone goes to sleep in freezer pods for the long flight home.

I detail that not as a criticism, but only observationally. Stories work because of execution not because of basic plot details, and Aliens is executed marvelously. 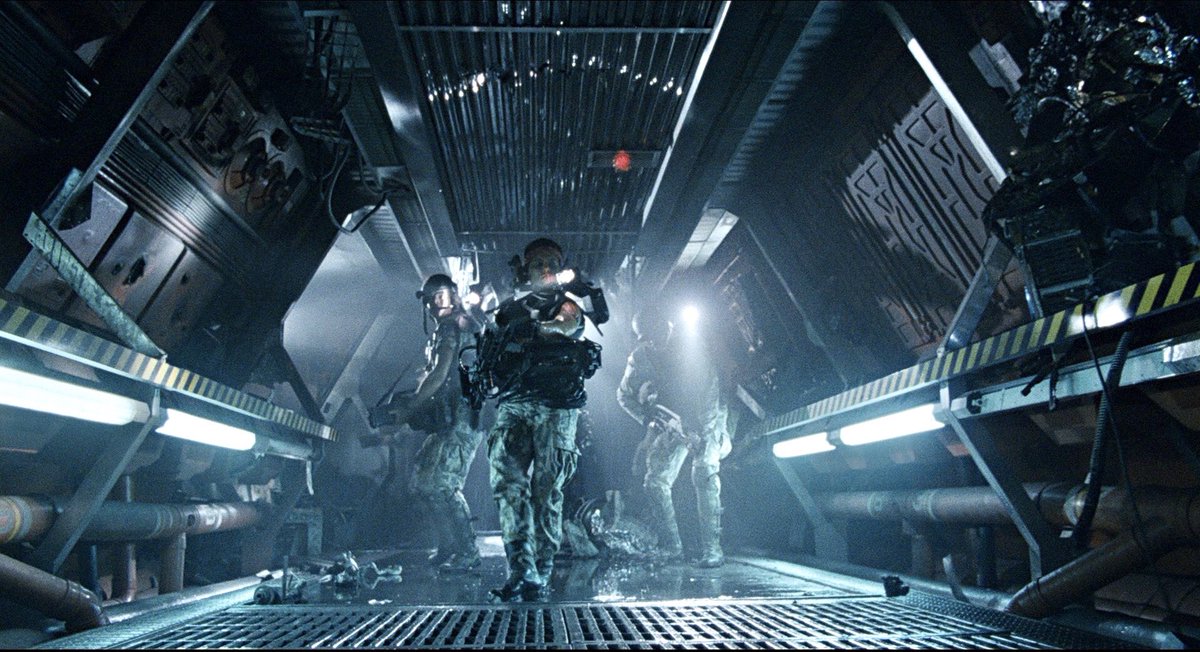 Ripley, having survived her first experience with the xenomorph on the Nostromo, has drifted through space for 57 years while in cryo-sleep. She gets picked up and returned to the Company who nurse her back to health and debrief her about her experience. No one believes her experiences, though there’s enough interest to get the colonists on LV-426 to check out the coordinates Ripley supplied. Of course, the Company loses contact with the colony immediately afterwards and they have to go in. Ripley gets roped in and tags along with a group of Colonial Marines. They find the colony deserted save Newt, a little girl hiding in ducts, before all hell breaks loose and the xenomorphs come calling, tearing apart the marines one by one. 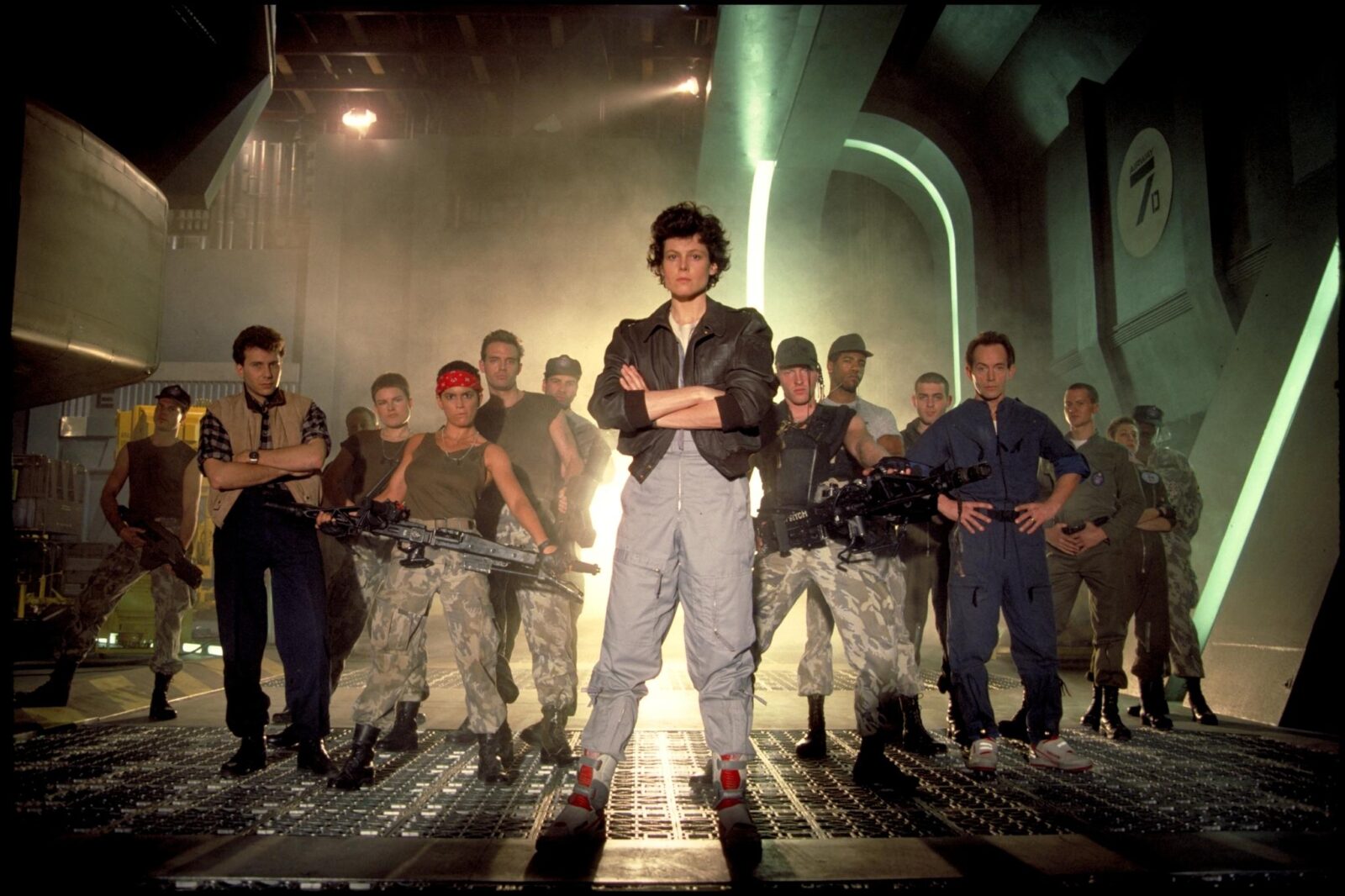 You can see the “bigger is better” mentality running through that. The setting is bigger (a colony instead of a small ship). The group of people is bigger. The type of people are bigger than life (space marines versus space truckers). The weapons are bigger (rifles and grenades versus makeshift prods and flamethrowers). The number of aliens is bigger (one versus many). There’s even the introduction of a new type of xenomorph, a much bigger Queen. The film embraces bigger in every way, and in doing so it fundamentally changes the nature of the horror that was present in the first film. 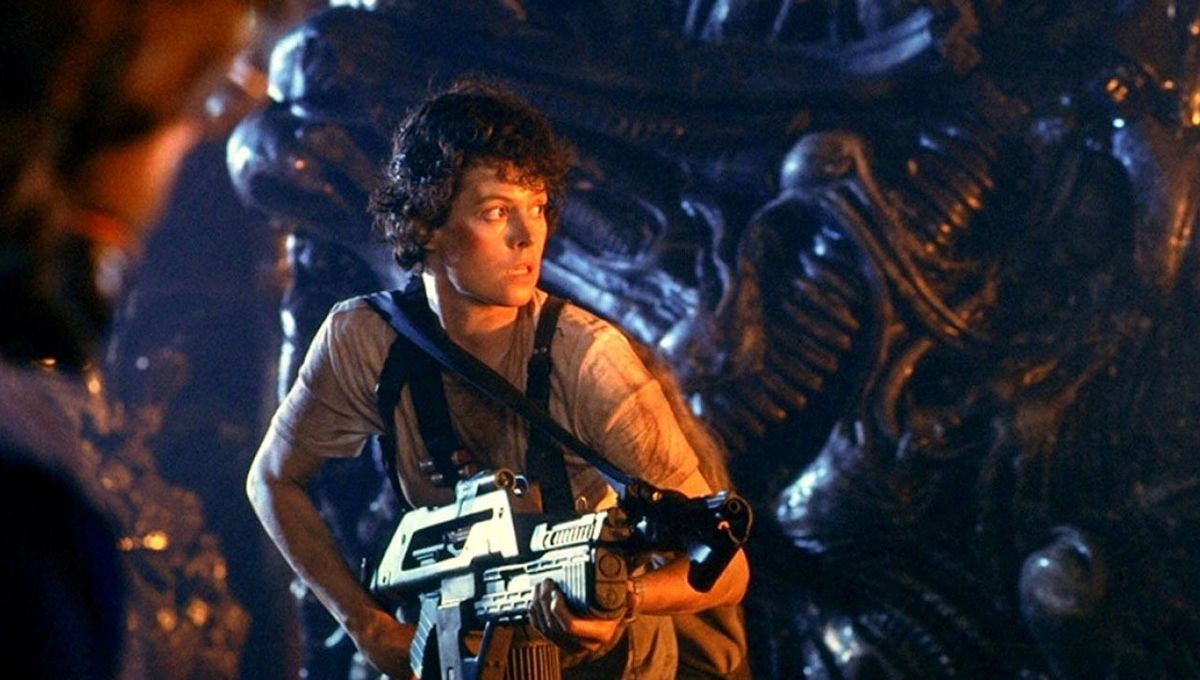 Cameron was smart enough to understand that by changing the scope of the threat (from one alien to many) he was changing the type of horror present. The first film was essentially a claustrophobic survival horror film. Some of those elements are still present in the sequel, but they’re far less prominent. The sequel is still a horror film, but it’s changed subgenres from the haunted house to an action horror film. That change is perfectly cast for the change in scale of the threat.

It also makes sense from a practical perspective. In the first, the xenomorph was untouchable, but that was an element of the crew’s unpreparedness. Sending in marines with big guns changes the relationship between the characters and the threat. The aliens could have been made invincible, but that might have been too far in the suspension of disbelief department, so increasing their number was probably the most logical choice. Swarms of aliens that you can’t see until it’s too late replace a single entity that could be around every corner. That also requires another extension of the aliens in the form of a new type of creature, hopefully bigger, and the queen fits the bill exactly. She’s huge and terrifying. 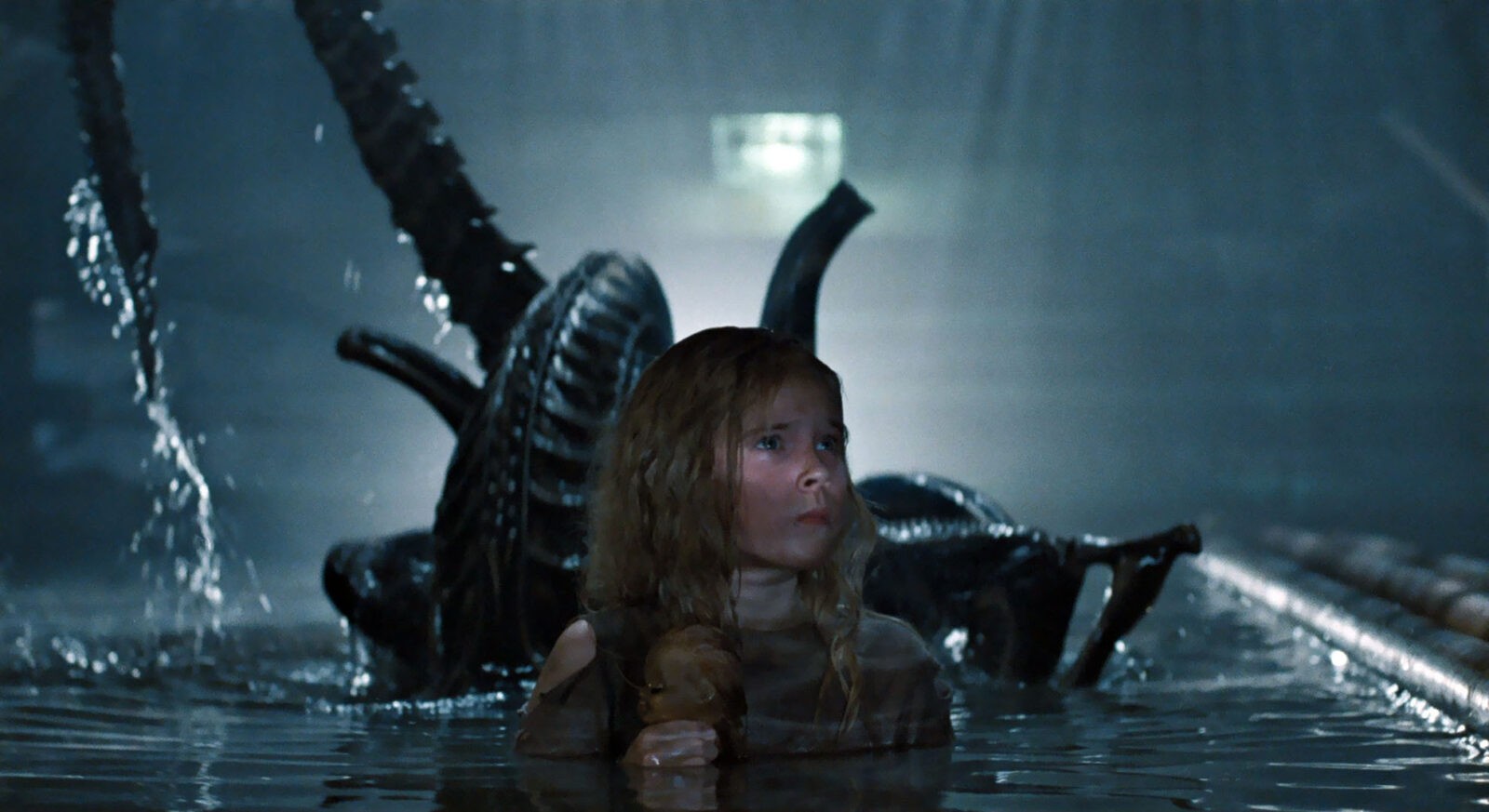 Moving on to thematic material, Aliens actually continues Ripley’s journey instead of just repeats it. If Alien was about the destruction of a family, Aliens is about recovering from trauma by forming a new family. Ripley can’t sleep through the night because she’s so consumed by nightmares of her past experience. It’s the reason she goes on the mission to begin with. She thinks that by confronting what hurt her, she may free herself of her own fear. Finding Newt, the little girl, gives her a purpose beyond her own survival. Newt becomes Ripley’s daughter (a connection made more potent through a deleted scene that’s included in the Special Edition of Ripley’s actual daughter cursing Ripley for leaving her alone her whole life), and Corporal Hicks takes on the mantle of father and husband to the pair. 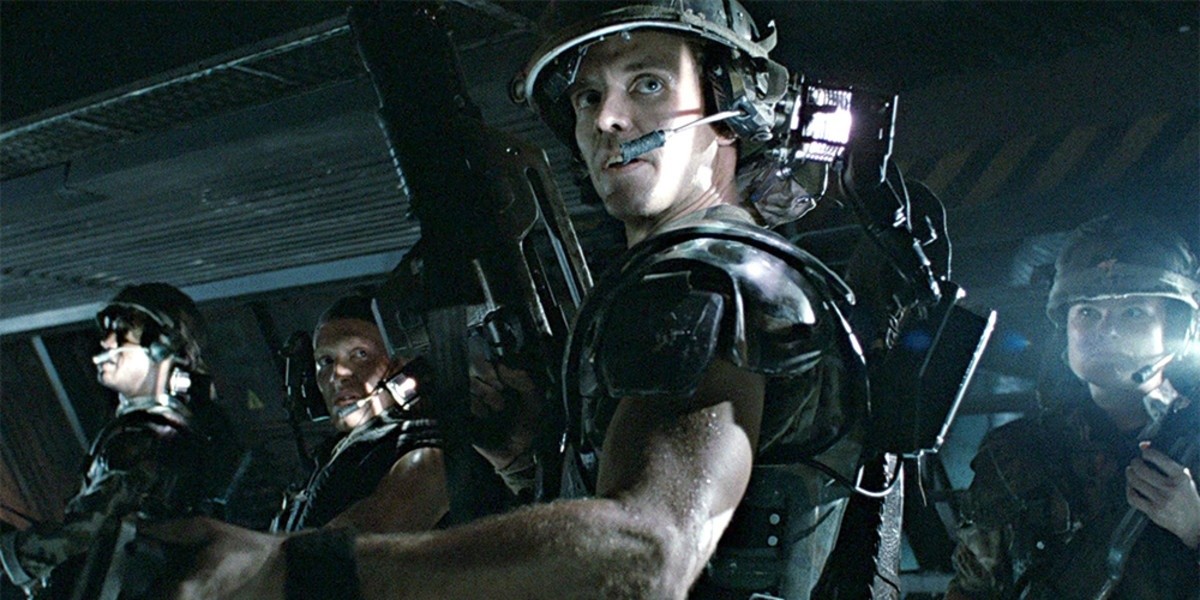 The final act of the film is entirely predicated on the newly formed family being threatened and torn apart. An alien grabs Newt and takes her to another part of the colony to be impregnated with another alien. Ripley has to go in herself, leaving Hicks behind in their escape ship because of his injuries. It becomes one mother (Ripley) against another mother (the Queen), a symmetry between the two characters that adds an extra thematic oomph to the final act. It plays with much more character that way instead of just bad assed woman going up against a large creature.

The real final fight on the Sulaco where Ripley gets in her mech suit and has, essentially, a fist fight with the Queen is one of the most gratifying and visceral special effects driven fights in popular film. It’s mother against mother after Ripley destroyed all of the Queen’s children. The fight is perfectly filmed and completely believable, giving Ripley the kind of physical advantage that is both believable and satisfying. 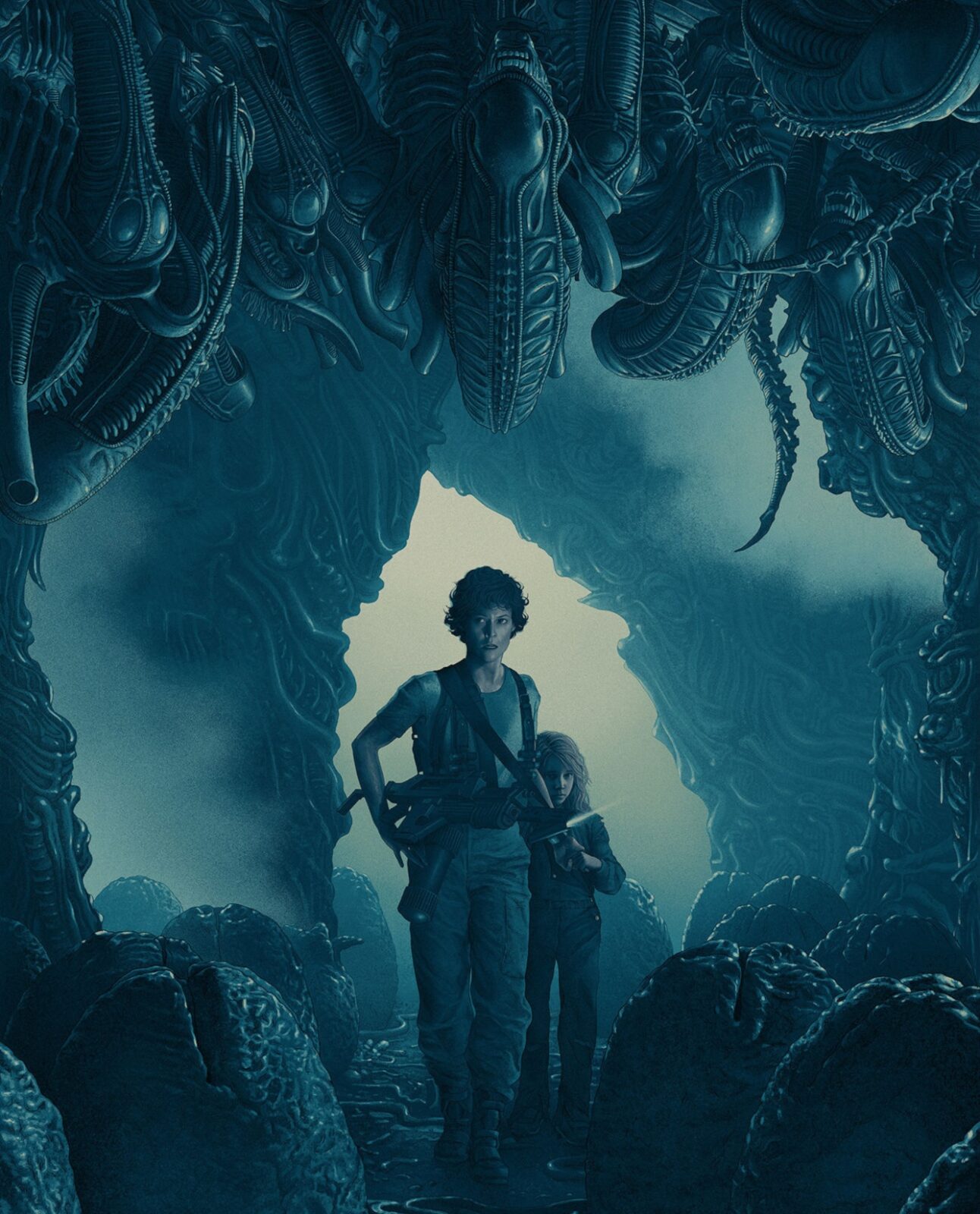 The movie’s just pure action horror entertainment that’s very smart about how it uses its characters to establish themes that feed into the terror. It’s bigger, louder, and with many more explosions, and it’s probably the best example of bigger is better filmmaking.