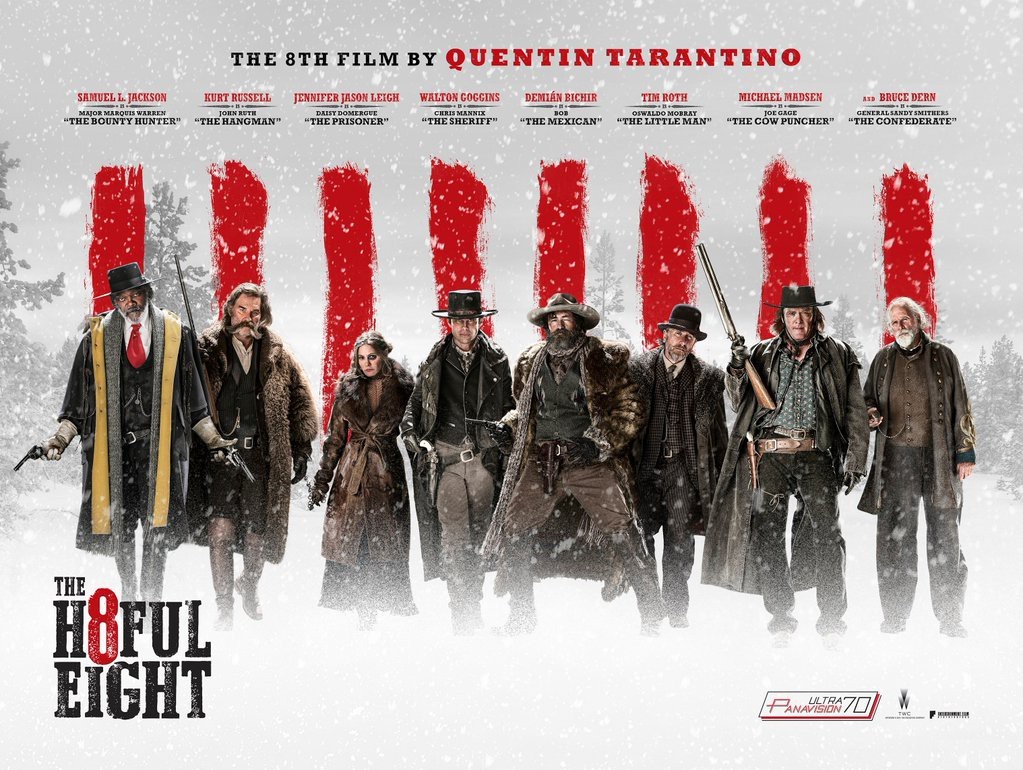 #1 in my Ranking of Quentin Tarantino movies.

A group of people are stuck in a small place in the middle of a blizzard that keeps them from escaping all while questions of who is actually who they say are abound, but enough about The Thing.

Out of all of Tarantino’s movies, this is the one that feels most like a novel. I know people equate it to a stage play, mostly because of the amount of dialogue and the limited location, but I feel like it has more in common with a literary creation than a theatrical one. Scenes play out at the kind of pace that you might expect from a book. They’re steady and about building character more than anything else. I love luxuriating in these long passages as we figure out who the people in Minnie’s Haberdashery are. 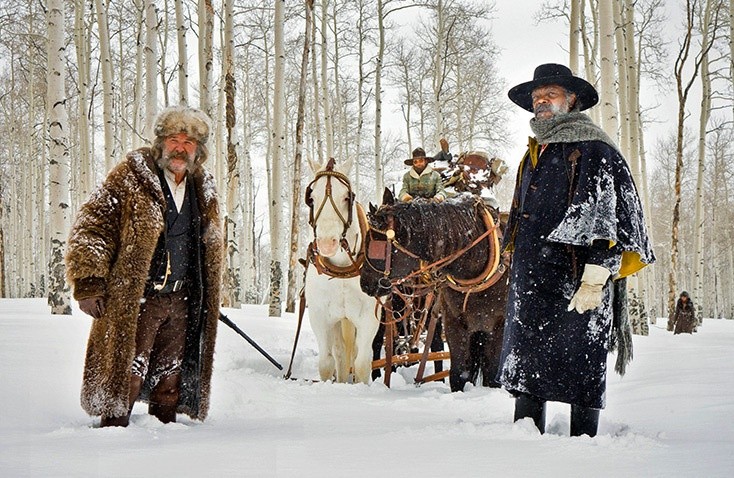 The movie begins some miles away, though. On a mountain road, a black bounty hunter sits alone on a trio of corpses he’s trying to bring into Red Rock, Wyoming. A stagecoach drives up carrying another bounty hunter and his live bounty, one Daisy Domergue, wanted for murder with a price of $10,000 on her head, dead or alive. The two bounty hunters come to an agreement to allow Marquis Warren onto the stagecoach as long as he helps protect John Ruth’s bounty. The interactions between all three range from outright hostile (between Ruth and Domergue) to cautiously respectful (between Warren and Ruth). Warren eventually shares his Lincoln letter with Ruth, a letter written to Warren directly from Abraham Lincoln from when Warren was a cavalry officer during the Civil War. 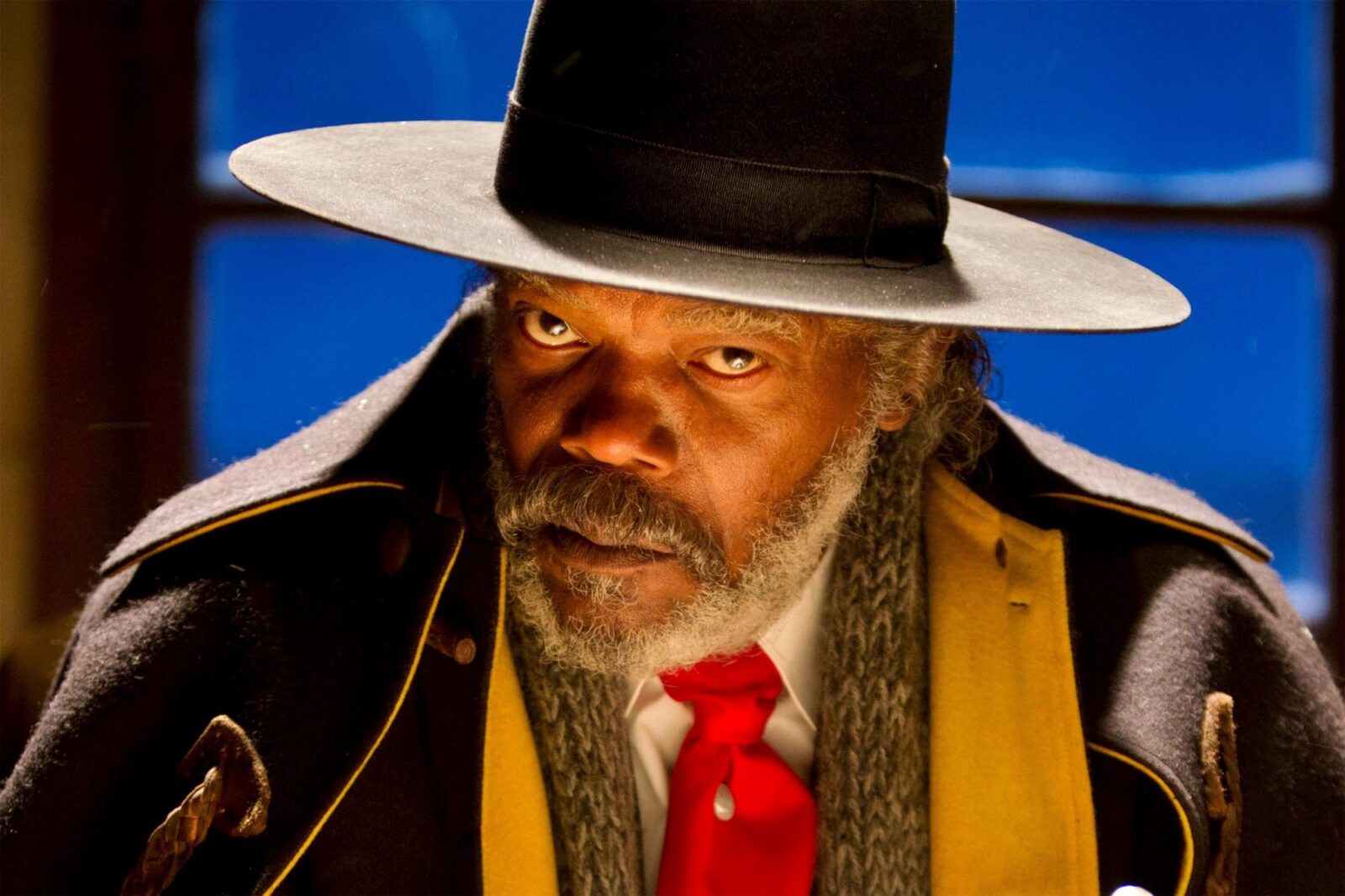 As they get closer to Red Rock, they pick up Chris Mannix who says that he’s the new sheriff of Red Rock, but with the blizzard bearing down on them, they can’t make it to Red Rock. They’re going to make it to the only place between them and the town, a haberdashery run by Minnie and Sweet Dave, neither of whom are actually there when the three arrive to find the door broken and won’t shut all the way without nailing in some boards to keep it in place. Something is obviously wrong.

Tarantino, though, doesn’t press that feeling just yet. He’s got three hours to tell his story, and he’s not in a huge rush to get to the end. The first half of the movie is really just scenes of getting to know the hateful eight characters. Aside from the four in the carriage, there’s also the Confederate general, the cowboy, the Mexican, and the little man. There are connections between some of them that get dug out. Mannix’s father was an officer in the Confederacy, and General Smithers had heard of him while Mannix had certainly heard of Smithers and revered him. Warren and Smithers had actually shared a battlefield at Baton Rouge, a battle noted by Warren for the savagery the Confederate army had exhibited towards the black Union soldiers, but Mannix, as the representative of the law, isn’t going to allow Warren to cold-bloodedly murder Smithers no matter what Smithers ordered in the war, especially in the service of the Confederacy. So, Warren places a revolver next to Smithers in his chair and then proceeds to tell Smithers a tale about how Warren had met Smithers’ son when he had come looking to collect on the bounty the Confederacy had placed on Warren’s head. I’m fairly convinced that Warren lies extensively through the whole story (Tarantino offers it narrative credence by showing it occurring on screen instead of just allowing Warren to tell it), and it is enough to get Smithers to reach for the gun. Warren, though, is too fast and kills Smithers before Smithers can do the same to him.

So begins the death at Minnie’s Haberdashery, an act of vengeful murder masked as self-defense. 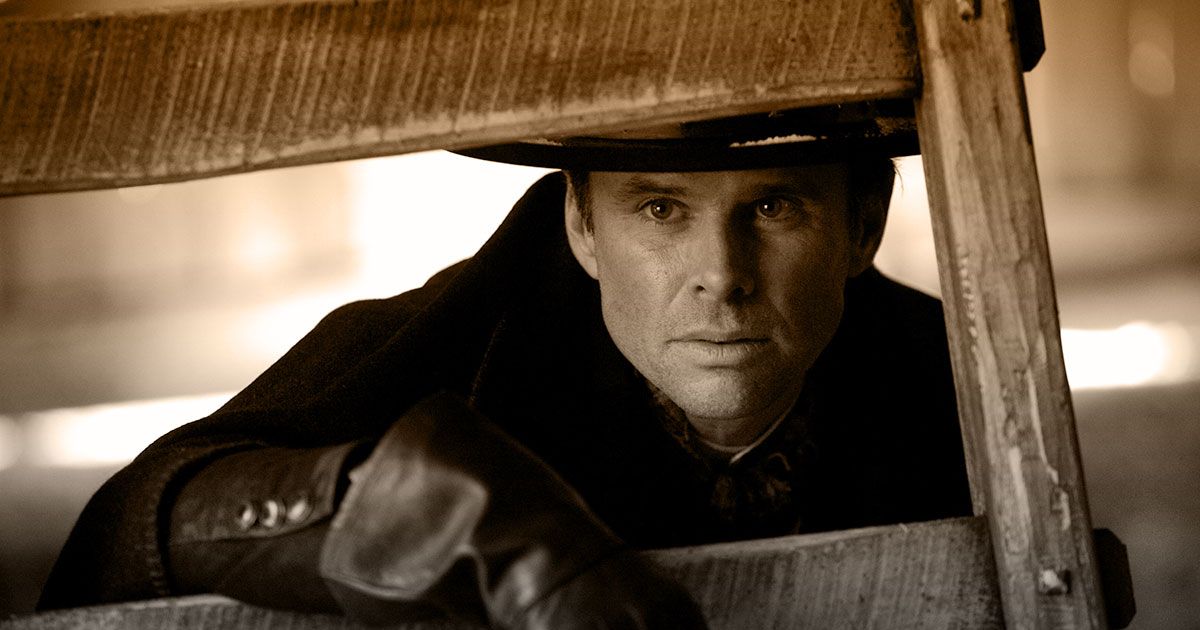 That murder, though, is of a vastly different character as what comes next. It serves as a distraction for the poisoning of the coffee pot which ends up killing Ruth and their driver O.B. (not one of the hateful eight, apparently). These killings are done to weed out those not in on the rescue of Daisy, and suspicion, as well as tension, suddenly shoots up. We, as the audience, have known that something was wrong since they first arrived at the remote haberdashery, but we could never quite put our own fingers on it. Warren, though, has an inkling. He’s been the Minnie’s before, and he points out the inconsistencies, executing one of the three remaining of the four he had found upon first arriving (Mexican Bob). Gunplay ensues including shots fired from under the floorboards.

Tarantino then does a signature jump backwards in time for a chapter dedicated to the events leading up to the beginning of the film. We see four men jump from a stagecoach earlier in the day. They settle in, we get to know the people already there including Minnie and Sweet Dave, before the four unleash hell and kill everyone except General Smithers whom they keep alive for character and to help sell the reality of the situation without Minnie around. One of these four is Jody, Daisy’s brother, there to save his sister from the hangman. 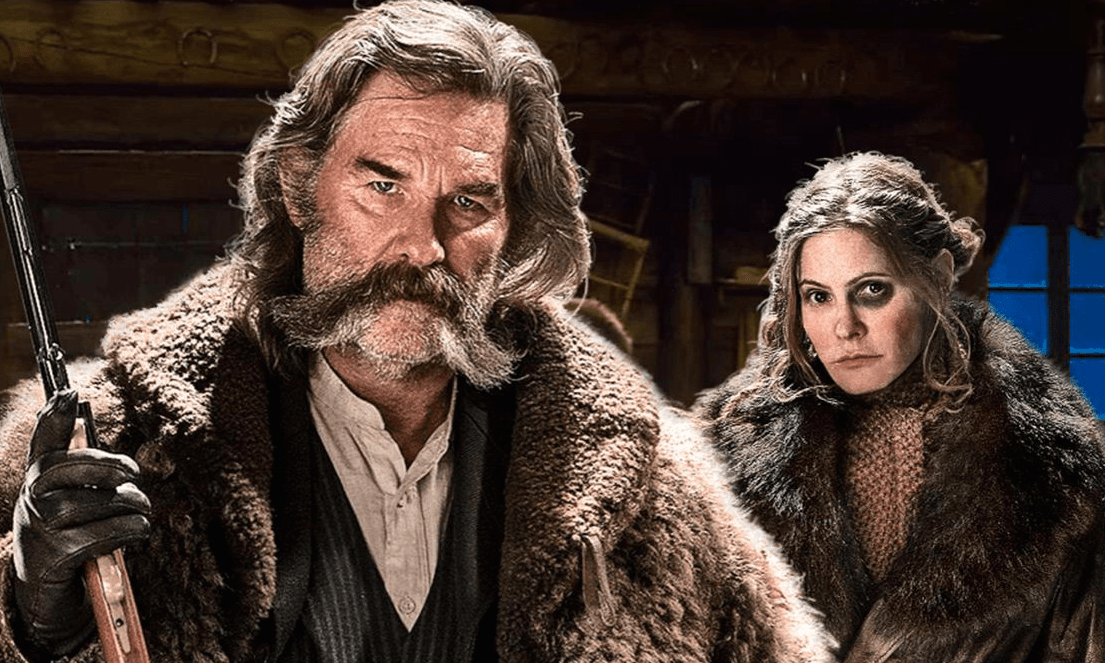 Jumping back to the present, we see how the rest plays out, and it’s apocalyptic in feel. People die, blood gets splattered (especially in Daisy’s face), and everyone’s bleeding out. It seems like the movie has embraced nihilism completely, but I would disagree. Mannix and Warren are the last two alive, and they’re both dying. Mannix asks to see this Lincoln letter that Warren has, and Warren hands it over. Reading it over, we recall an earlier scene where Mannix called the letter a complete fiction and Warren copped to it, but in their final moments, Mannix finds great solace in those invented words from Abraham Lincoln.

Like in much of Tarantino’s work, there’s an element of the metanarrative at play, and here, in The Hateful Eight, it demonstrates the power of fiction to move us. Warren probably invents the story of Smithers’ son’s death, and it moves the old general enough to throw the rest of his life away. Daisy swears to a story of fifteen more members of her gang waiting to come and kill Mannix and Warren if they don’t let Daisy go, and the story has an effect for a while. And finally the letter that Mannix has called a fake (which he crumples up and tosses aside after reading it) soothes him in his final moments after the worst day of his life. 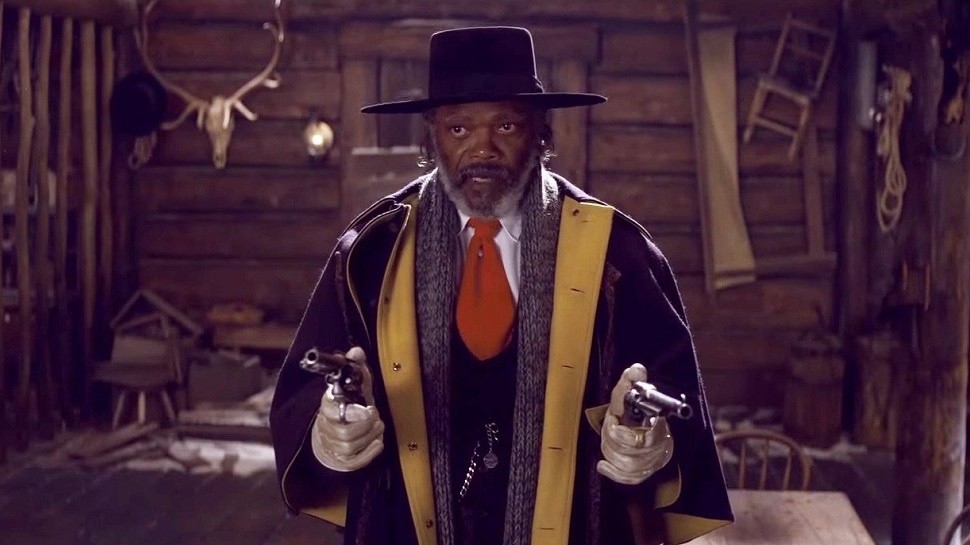 So, why do I love this movie so much? I remember off handedly mentioning the fact that I think that this is Tarantino’s best movie to some people, thinking the comment was uncontroversial, and I was completely unprepared for the blowback. Some people hate this movie as much as the characters hate each other, and I honestly do not see why. Yes, the movie is slow, but it’s slow in much the same way Inglourious Basterds, Django Unchained, and Once Upon a Time … In Hollywood are slow. All four movies take their time to build characters and set the scene before throwing their characters at each other to bloody result. The characters here are awful people, but so are most of the characters in all of Tarantino’s movies. I love hearing them talk, egging each other on, and even beginning to respect each other. I love the 70mm cinematography, even if most of it is relegated to the haberdashery. I love the score from Morricone. The performances are great. The Hateful Eight creates a world that I simply love to luxuriate in. I simply love it as a film, and yes, I do think it’s Tarantino’s best work. 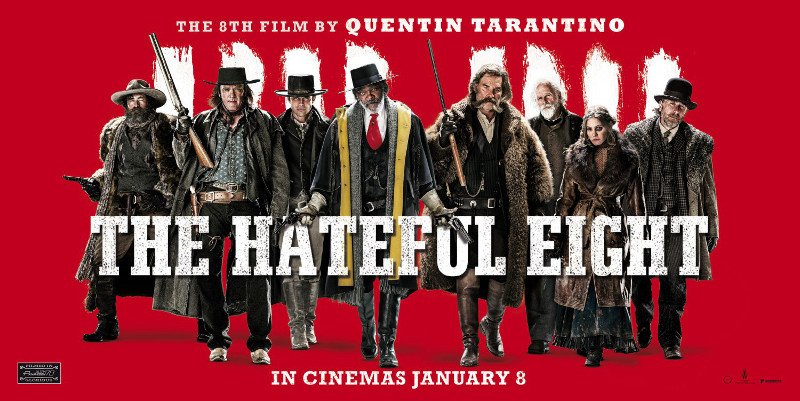