POTA Franchise Ranked: #4 Conquest of the Planet of the Apes (1972) 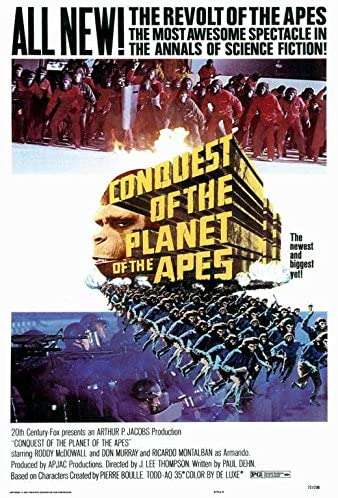 #4 in my Ranking of the Planet of the Apes Franchise.

This is the return to form worthy of a sequel of the original Planet of the Apes. The unrated version (the version originally screened for test audiences before those reactions forced some changes that softened the film) is the same kind of damning of humanity that was Taylor’s prostration in front of the Statue of Liberty. It’s not perfect, sharing some of the same flaws as the first two sequels in the franchise, but once it gets past a certain point, it’s laser focused on what it wants to do and say. 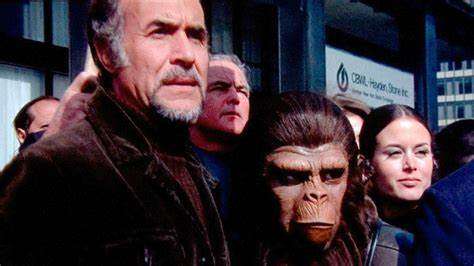 The largest two problems with the film are really front-loaded. The first is a familiar problem to the franchise where there’s an inordinate amount of time spent trying to justify the film’s existence and catch up the audience. Armando, played by the wonderful Ricardo Montalban, ended the movie in possession of Milo (whom Armando inexplicably decides to call Caesar at the beginning), the speaking ape child of Zira and Cornelius, and starts this film with Milo on a leash as he goes into a city to hand out flyers for his zoo which is in town. In his scenes with Caesar, Armando spends most of his time explaining to Caesar who his parents were and how the world of ape pets and servants came about. It’s really uncompelling stuff and should have been replaced by Caesar and Armando having an actual relationship. 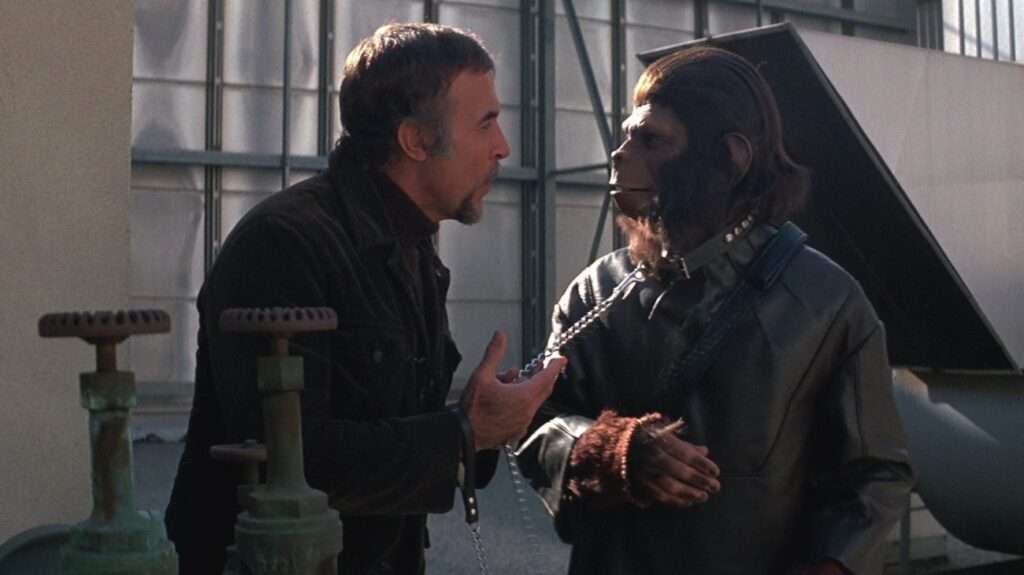 The other major problem is that the world building is pretty sparse, and the beginning of the movie feels off because of the short timeframe from the previous film to this one (about twenty years) and the vast changes that have taken to society and apes. America has essentially dissolved (the way they talk about the president from the previous movie seems to indicate that there’s no president anymore) and a fascist dictatorship has taken hold, complete with black uniforms. It’s a large leap for such a short amount of time, and it’s all done so that Caesar himself can be the main character of this story. Really, the movie’s insistence on being directly connected to the previous movie that the filmmakers believe that the audience can’t remember so they have to use a character to completely summarize its events is a crutch. Set this a hundred years after the previous film and Caesar is a descendant of Zira and Cornelius where their children never learned to talk but retained their intelligence or something.

Really, those are my only problems with the film, and they’re largely forgotten by the half-hour mark.

Caesar accidentally gives himself away and needs to run. He hides among some orangutans getting imported into the city and enters the general ape population where he’s purchased at auction (in a parallel to an African slave auction) by the governor, Breck. Breck allows the ape to name himself by pointing to a list of names in a book, and Caesar chooses his own name, a narrative choice that I love. Caesar, at this point, has been shown the brutality visited upon his kind by humanity and he knows that he’s smarter than the rest. He can be their leader, and when given the chance to name himself, he chooses that of a king whose name became synonymous with kings. It would have been stronger if Armando had called him Milo, but I’ll take it as it is.

As Caesar acclimates himself to life as a slave, he learns of the brutal methods that humanity uses at keeping the apes in line while Armando is questioned about the nature of the ape he had brought to the city, the governor knowing about Zira and Cornelius’s child and the suspicion that the child that died at the end of the previous film wasn’t theirs, suspecting that Caesar is theirs. Armando ends up killing himself rather than giving away Caesar, and Caesar gets the purpose of revolution. Now, there’s another gap here that should have been addressed because it looks like Caesar has telepathic powers to convince other apes to make a mess of the system rather than him organizing. It’s a weird moment that gives way to an extended sequence of preparation.

The revolution is great, though. From the moment the apes decide to come out and fight to the finale, the film uses everything it has in its limited budget to make the action feel large and brutal. This is a slave revolt of the most violent kind, and it works really well. J. Lee Thompson, the director, intentionally filmed at night to hide the limited number of extras in ape masks he had, but it was also a great aesthetic choice because the revolution feels particularly menacing at night with flames and the green and red jumpsuits of the apes bearing down on the black uniforms of the human security forces.

The main difference between the unrated, original, version of the film and the theatrical version is the ending. It’s an interesting split because the next movie, Battle for the Planet of the Apes, follows on from the theatrical ending where Caesar lets Breck live, but the original ending where Caesar unapologetically calls for the subjugation of the human race under ape rule and allows Breck’s brutal murder is the better ending that fits with the rest of the film and the overall thrust of pessimism of the entire franchise. There’s no sense that Caesar wants peace. He wants blood and vengeance and power over those who had wronged him. 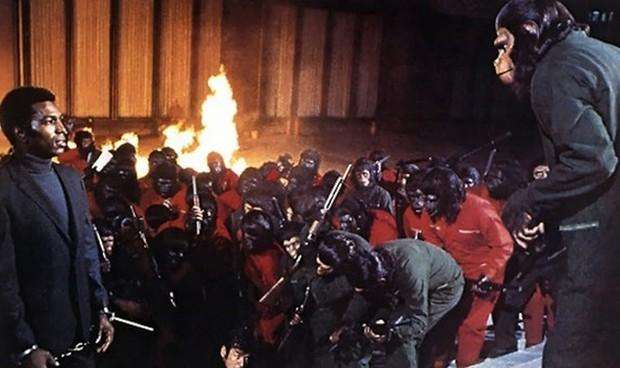 After a rocky start, Conquest of the Planet of the Apes comes together really well. It’s brutal and the sort of thing you don’t expect from a mass marketed film (which is why the ending got changed, naturally), but it also holds together in its last hour. Being the shortest of the Apes movies, it really could have used a longer runtime to flesh out some things here and there, but as it stands, I kind of love this fourth entry in the franchise.