Pirates of the Caribbean Franchise Ranked: #5 On Stranger Tides (2011)

Another franchise, another definitive ranking.

I have more affection for the entirety of the first trilogy that Gore Verbinski delivered than most people seem to have. The movies that followed, though, had no idea what was appealing at all about those first three. Diluting the weirdness, pushing Jack Sparrow forward even though he ends up with little to no reason for being around, and then introducing new characters with a great need to connect them familially with established characters all combine together for little more than the definition of corporate cash grabs.

All I know is that I want Gore Verbinski to make more movies, and I wouldn’t complain if that Bioshock movie of his suddenly came together. 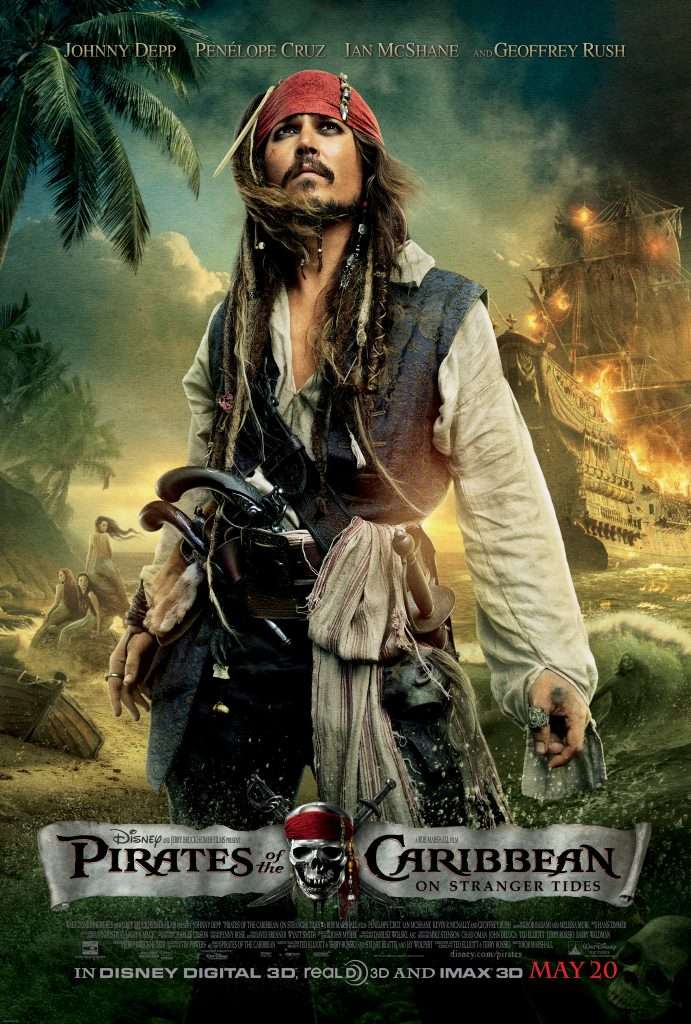 #5 in my ranking of the Pirates of the Caribbean franchise.

Pirates Of The Caribbean: On Stranger Tides Trailer B

I think it would be difficult to find another better example of the emptiness of corporate filmmaking than the fourth entry in the Pirates of the Caribbean franchise, On Stranger Tides. Taking the interesting bits from the earlier films, tossing them completely, and placing the largest side character front and center in an aimless adventure that simply drags from one empty conversation of plot points to another, the film is a dreary exercise in a corporation deciding that hitting a release date with a recognizable and conceivably still profitable property is more important than finding an interesting story to tell. I don’t want to say that this film was made from a first draft. I would imagine it was draft 10-15 or so, but there was no one person guiding the writing process executed by the writers of the first three films Ted Elliott and Terry Russio. Yes, there was a director, the largely unremarkable Rob Marshall, but it’s obvious that the writers took the inspiration from the novel On Stranger Tides by Tim Powers and then executives were determined to include certain things they thought people liked from the previous films without understanding what originally made those things special. To take a quick and easy example: fantasy.

The first three films are filled with dead pirate ghost skeletons, fish men who man a dreaded ship that can dive below water, a strange afterlife, and pirate lords electing a king to fight off the East India Trading Company. Those movies are weird. This replaces all of that with…Blackbeard with a magic sword that…controls the ropes of his ship? Mermaids? The Fountain of Youth? Yeah, they’re fantastical for sure, no one would deny that, but they are a decided step down in the weirdness department, like a studio executive said, “We know that fantasy made the previous films popular, but we feel like Gore Verbinski took it too far, despite the money we made. Include the fantasy, but make it more grounded, because that’s what the kids want from their fantasies about pirates fighting supernatural beings.” Also there are some zombie members of Blackbeard’s crew. Why? I don’t know. The kids like zombies, right? 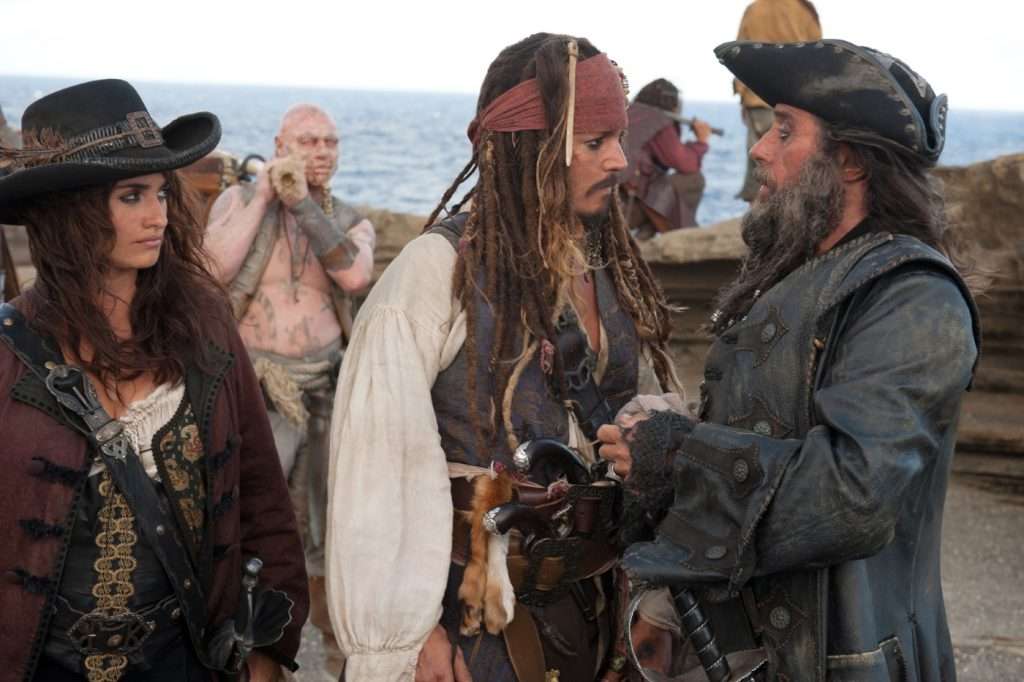 So, the story, for what it is worth, is about Captain Jack Sparrow (Johnny Depp) joining the Queen Anne’s Revenge under Blackbeard (Ian McShane) and his daughter and first mate Angelica (Penelope Cruz) in the search for the Fountain of Youth. They are racing against time to reach it before Barbossa (Geoffrey Rush), now a celebrated privateer working for the British crown, and the Spanish. This is the makings of a Pirates of the Caribbean movie, all right, except that it’s remarkably boring. That boringness starts before the action suddenly stops for an hour, by the way.

It’s a chase with no sense of urgency because motives are intentionally hidden. In the previous films there was deception around every corner, but we ultimately understood what the characters wanted. Will wanted alternatively to marry Elizabeth and to free his twice cursed pirate father. Jack wanted to live forever and regain his ship, the Black Pearl. Elizabeth wanted to marry Will while growing into a bit of a pirate herself. It made sense, and despite all the crossing of plot lines, we were never in doubt of what they ultimately wanted. Here…the motives of two of the three parties chasing after the Fountain are hidden until 100 minutes into the film. Heck, the main Spanish antagonist doesn’t get his second line until the movie’s almost done. It’s a fog helped none at all by the fact that Jack seems to have no reason to be there at all. The films have progressively become the Jack Sparrow show, but that really manifested before in Jack becoming a more prominent member of what really was an ensemble. Here he is definitely the main character, and yet…it’s hard to tell what he wants at all. He starts the film, having given up his search for the Fountain completely between the stinger at the end of the last film and the start of this one, showing up in London because someone’s impersonating him looking for a crew. He then gets pressganged into this crew, which turns out to be the Queen Anne’s Revenge, organizes a mutiny for…reasons, and then is told why he’s there at all by Blackbeard. He will lead them to the Fountain since he had the charts (the magical compass Jack carries gets forgotten for more than half the movie). Jack, essentially, has no motive to search out the Fountain of Youth through the entire film. He’s always going because Blackbeard tells him to. That’s…that’s a terrible way to write a main character.

Why does Blackbeard want it? Because of a (groan) prophecy. What is this prophecy? That a man with one leg will kill him in a fortnight. That’s mighty specific, but whatever. How is this going to stop the one-legged man? Well, I presume the Fountain’s extension of life makes you impervious to swords and bullets. And how is one supposed to drink from the Fountain? Well, there’s a complicated process involving two silver chalices that were once owned by Ponce de Leon (how it might have worked before the 16th century no one seems to care), a mermaid tear, and the water from the Fountain. You know what all of this is? Busy work to extend the runtime. 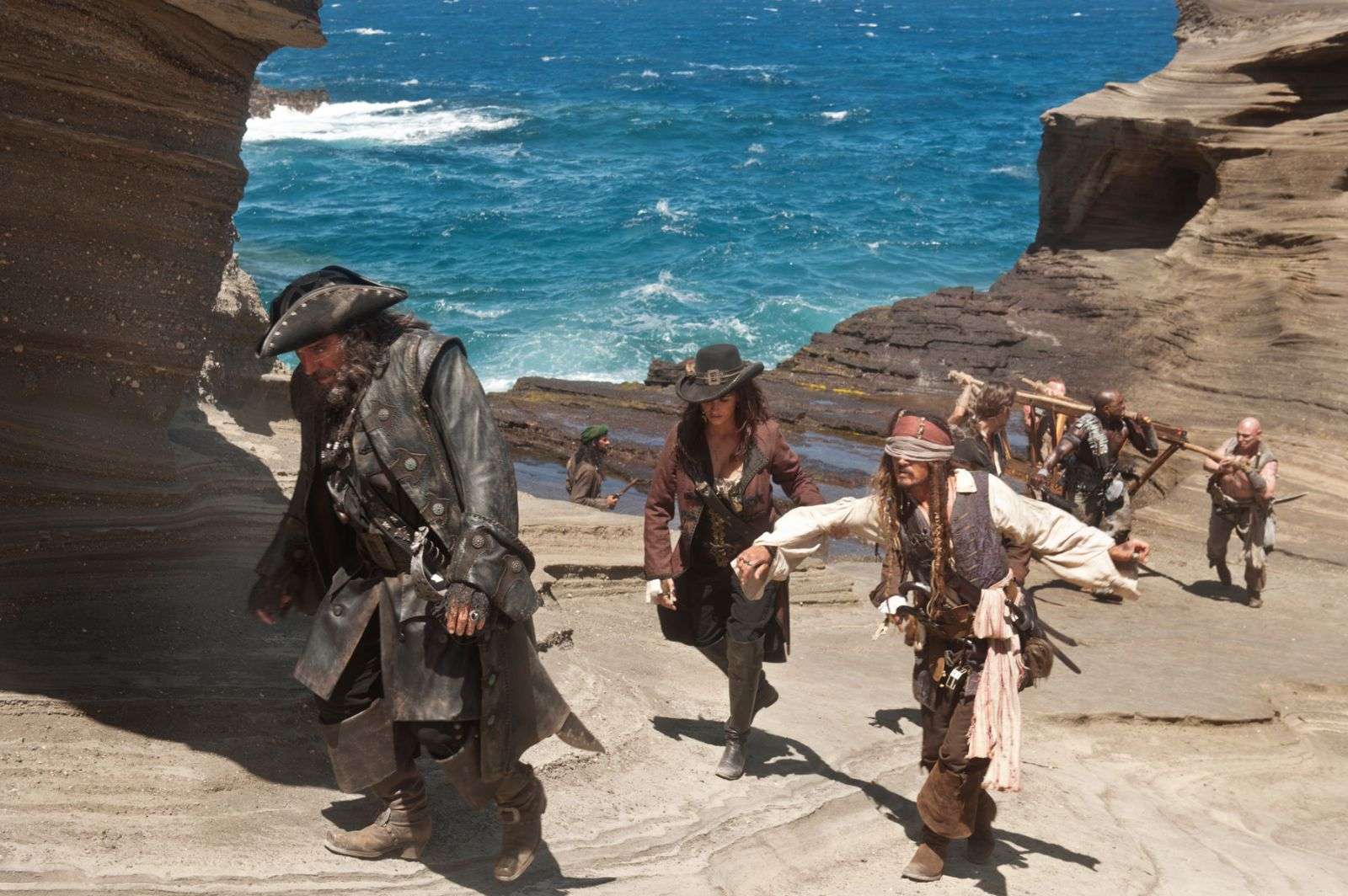 The character who should have been our main character, the straight man to Jack’s crazy wildcard, is the missionary Philip (Sam Claflin). He’s not seen until about 40 minutes into the film, and his first line isn’t until about twenty minutes later. He also has a single interaction with Jack and spends most of his time pining for the mermaid that the pirates under Blackbeard capture. He is kind of the center of my idea that the film was rushed to production once an executive with no sense of storytelling saw that the script had all the elements he wanted to see whether they worked or not in context. The missionary was there. It didn’t matter whether he served an interesting or useful story purpose, he was the Orlando Bloom character. Check that mark and move on. The finale, where the pirates, Barbossa’s privateers, and the Spanish all gather at the Fountain is where we finally get the Spanish motivation (they wish to destroy the Fountain because they consider it profane) is interesting in that it shows what the movie could have been. This literally is a chase and it never feels like it, and at the core of this chase is the idea that the Spanish will not just take the Fountain and block off other people from it, hoarding it for themselves. Instead they wish to destroy it forever. So, the Spanish wish to destroy it, Barbossa doesn’t care and just wants to kill Blackbeard (he is the one-legged man), and Blackbeard just wants to get there because of some prophecy. Well, I like the first two (the third one is terrible), and that all provides the interesting context for how the chase would go down in a better script.

And yet, in the center of it all is Jack. Jack, the character who spent the previous two films obsessing over the idea of living forever, has no motivation in a movie about a quest to gain the Fountain of Youth. That’s just simple writing malpractice. Even when they get there, he’s not tempted by it in the least. He’s just there to play his part in the drama between Blackbeard and Angelica. This movie is awful, but I can’t hate it because it’s just not worth the emotional energy. It’s a dreary, largely boring exercise in corporate filmmaking that represents pretty much the worst of how Hollywood makes movies. It forgets why the previous films were popular, instead choosing to just weakly mimic what came before without any understanding of what’s going on. Rob Marshall was brought in because he would follow executive orders, just like Russio and Elliott were retained because they would craft the script in the way the studio wanted. There was no artistic intent left in the final product. It was just cogs in a corporate machine following orders from someone who doesn’t understand what they’re doing.