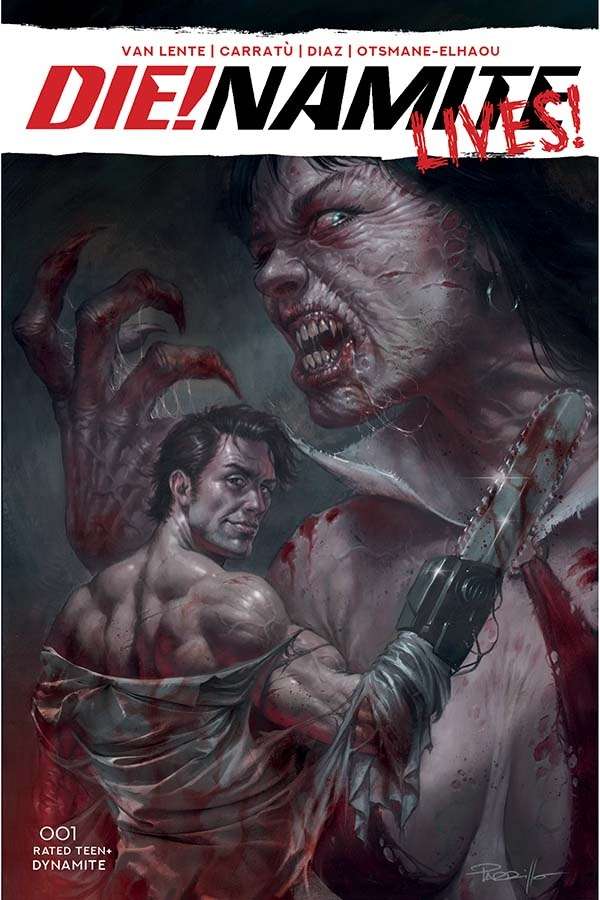 The hit series, DIEnamite lives returns, cuz you can’t kill a never-ending army of zombies…you can only hope to beat the $%&# out of them! The next chapter in Dynamite’s apocalyptic, sky-high stakes crossover saga includes one groovy new guest!

After tragically losing their first Chosen One against the zombie plague, Vampirella, Miss Fury, and what remains of the Project Superpowers look for a new savior — but Ash Williams is an even more reluctant Deadite hunter than usual! This time, the Army of Darkness has ray guns, superpowers and a brilliant new general: Evil Sonja, who takes her role of Queen of Hel quite seriously!

Is there anything more appealing than Ash Williams fighting the undead? Not really. Ash is up there as a cult classic character with a great sense of humor and embodies fun mayhem. That isn’t lacking in this read. The only thing that does lack is when they switch to the established survivors. It moves the story forward, but it feels like filler to Ash. Along with Ash joining the battle; we also have Jennifer’s blood. A wife by day and Punisher style vigilante by night. Obviously, they are going to join up with Tabu and the rest to take down the now evil Sonja. It just would’ve been nice to have their introductions have more focus. That, without a doubt, will come later on though. Without a doubt featuring blood and mayhem along the way.

Knowing that Sonja has gone bad in DIEnamite lives #1 and is the threat makes this title interesting to see how they team up to fight her. Although it’s kinda hindered by the Superpower crossover, which has already seen Red Sonja and Vampirella face off. However, Ash is the real highlight though and for him alone I can recommend this book for fans of the Evil Dead character.

If you’d like to Buy this title you can do so here or check with your LCS.