DC Comics is trending in the wrong direction. Over the past year or so Hal Jordan and the Green Lantern Corps, Super Sons, Nightwing, Flash, Aquaman, Wonder Woman, Superman, and Action Comics were cancelled or received terrible new creative direction. These titles would have made up the bulk of DC Comics Top 5. DC Comics is struggling to replace them with new quality series. DC only features a couple of books I consider great or better. They currently features a glut of ok books but few that stand out. A few series just missed the Top 5 including; Green Lantern, The Batman Who laughs, Adventures of the Super Sons and Teen Titans.

Let’s get into the good stuff starting with number five. One of DC Comics newest heroes.

When Scott Snyder’s Dark Knights Metal ended, DC announced The New Age of Heroes. A “masterclass” from their best art talent available. That turned out to be nothing more than lip service but the initiative produced some great books. None better than The Silencer. It’s suffered from uneven visuals throughout, it burned through three artist in only 17 issues.

Dan Abnett is one of the most underrated writers in all of comics. There are plenty of people pounding the table for new female characters and character of color. Enter former assassin Honor Guest aka The Silencer. Silencer is a bad ass hero who’s also a loving wife and mother. Like most other New Age of Heroes books it was initially promoted and then abandoned by DC. Unfortunately, the series finishes its run at issue 18. 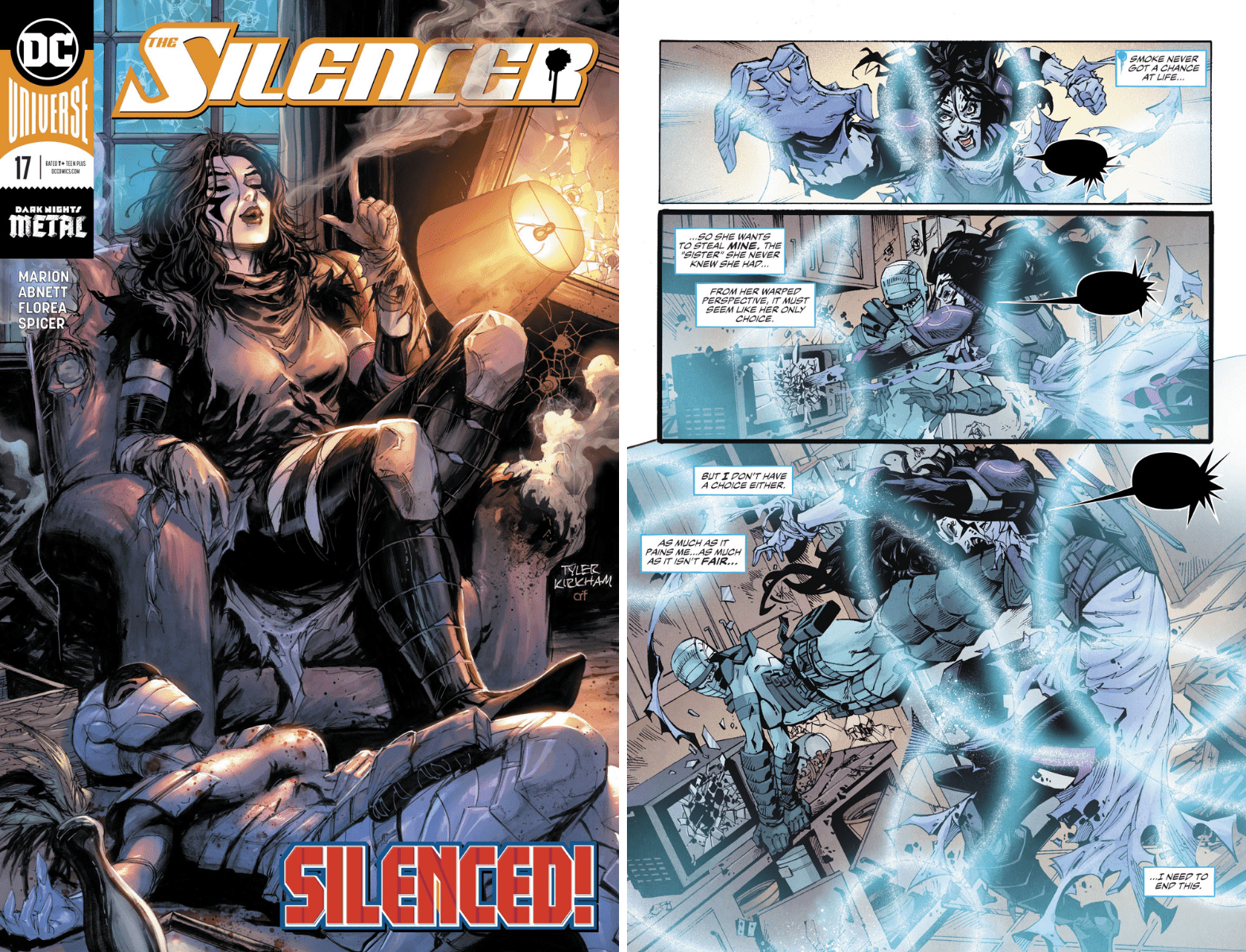 Robert Venditti is my personal favorite writer in all of comics. He leads my number four DC Comic Series.

A series featuring Nazi’s ruling America isn’t something I read in today’s heated political climate. Venditti is the only reason I looked at a single page, and I’m glad I did. Veteran Superman artist Eddy Barrows leads the art team and is fantastic. The series features some of the boldest visuals of pro-American values in comics today. It’s strange seeing Uncle Sam walking through a cemetery lamenting the deaths of American freedoms. It’s easily my favorite page of art in any comic book the past year.

The new Freedom Fighter team is made up of new characters. Many assuming the mantel from older relatives. Venditti does a masterful job getting readers up to speed with Doll Girl, Black Condor, The Human Bomb and others. The return of Uncle Sam to face the son of his old nemesis Adolph Hitler is really exciting. The series features an alternate version of Superman called Overman who’s brainwashed by the Nazi regime. 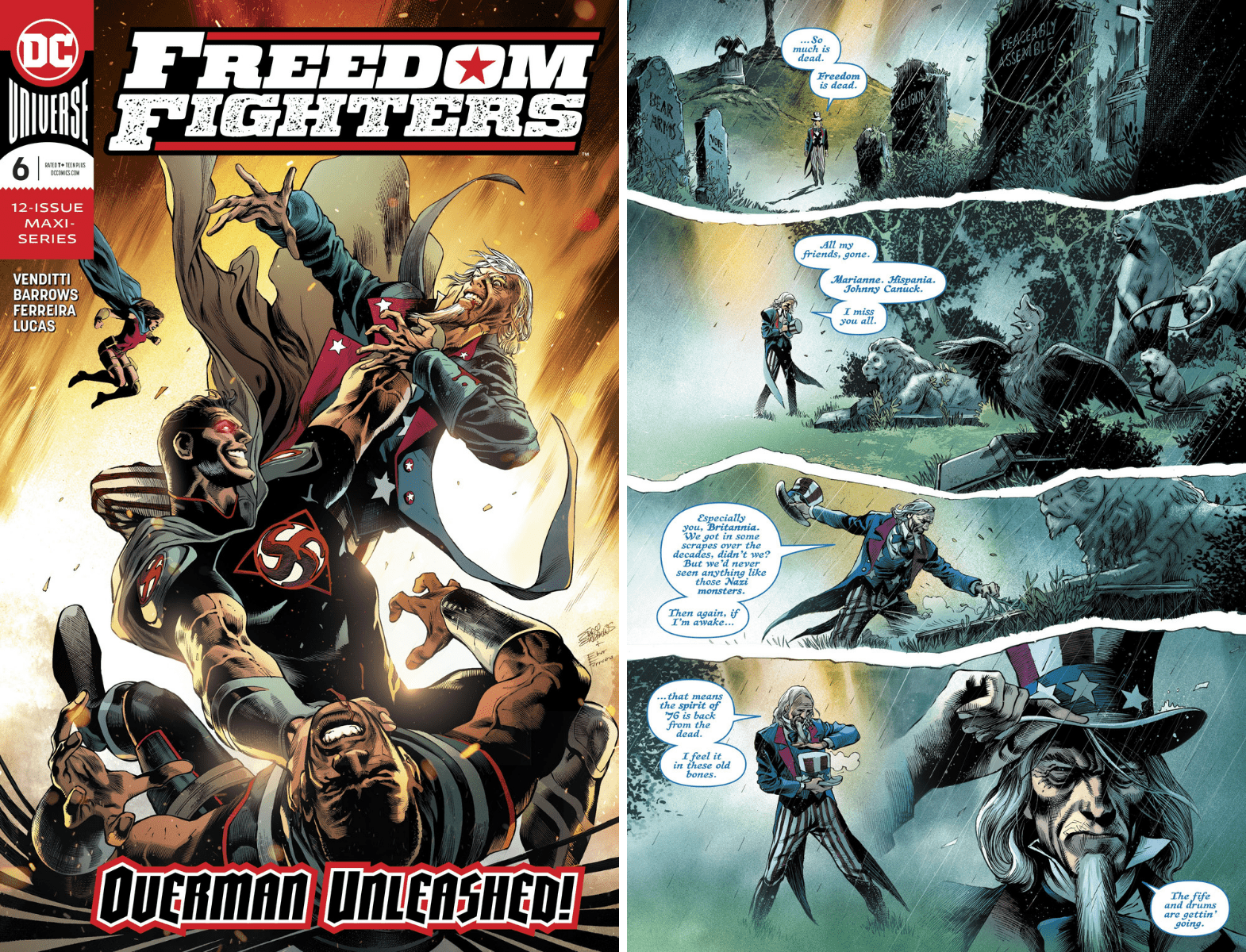 3. Batman and the Outsiders

If there’s one thing that’s held Hill back during his time in the industry it’s the quality of his artists. DC Comics pairs him with Dexter Soy on Batman and the Outsiders. Soy is the most underrated artist in all of comics in my opinion. He’s a fantastic visual storyteller. His action is very impactful and easy to follow. Color artist Veronica Gandini puts the series visuals over-the-top.

Batman and the Outsiders only released one issue but it’s a continuation of Bryan Hills fantastic story arc in Detective Comics. Hill is terrific writing street-level characters and you can tell he has a true love for Batman. The Outsiders are made up of Black Lightning, Katana, Orphan and The Signal. Black Lightning is brought in by Bruce to lead the team and help finish preparing Casandra Cain and Duke Thomas. If DC keeps Bryan Hill, Dexter Soy and Veronica Gandini together I expect them to be challenging for the number one spot very soon. 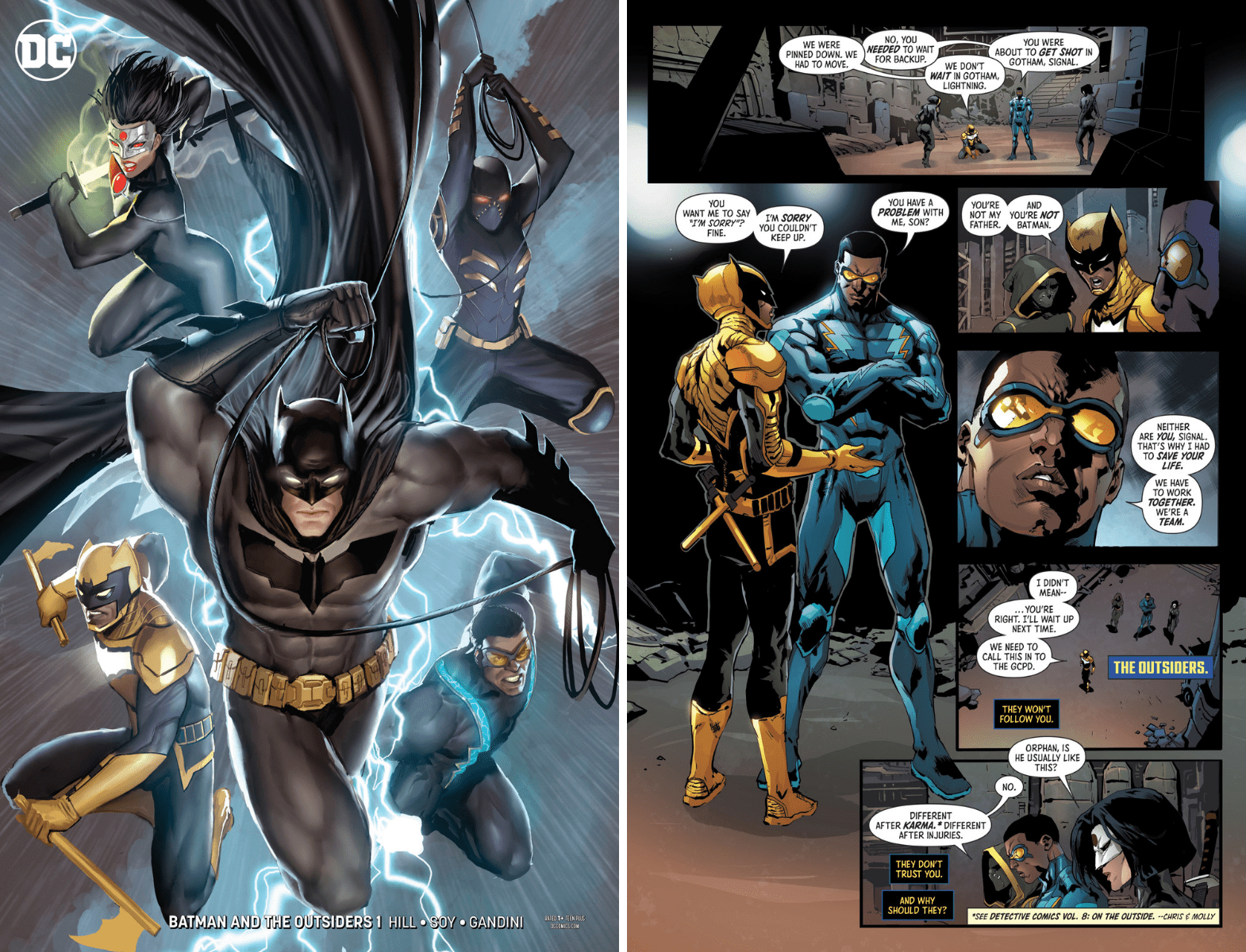 Geoff Johns is one the most revered writers in modern DC Comics. At number two is his fantastic Watchmen DC Universe crossover series.

Doomsday Clock has been plagued by delays for almost a year now. When issues do release they are among the best in the industry. Artist Gary Frank is one of the brightest talents in the comic biz. His work on Doomsday Clock is nothing short of extraordinary. He marries the look and feel of Alan Moore and Dave Gibbons seminal The Watchmen into the DC Universe with perfection. His visual style is tight and crisp and his character work is very expressive.

Geoff Johns is writing at peak ability on Doomsday Clock. Writing the sequel to what many believe is the greats comic series of all-times is no small task. In Doomsday Clock #10 Johns throws readers and the DC Universe for an absolute loop. The Watchmen’s all-powerful Doctor Manhattan, who experiences periods of time concurrently, is aware of the DC multiverse. He’s witnessed all the crises in the DC Universe since Superman’s arrival in 1939. Not only that, he’s affected them. How exactly, hasn’t been fully realized. 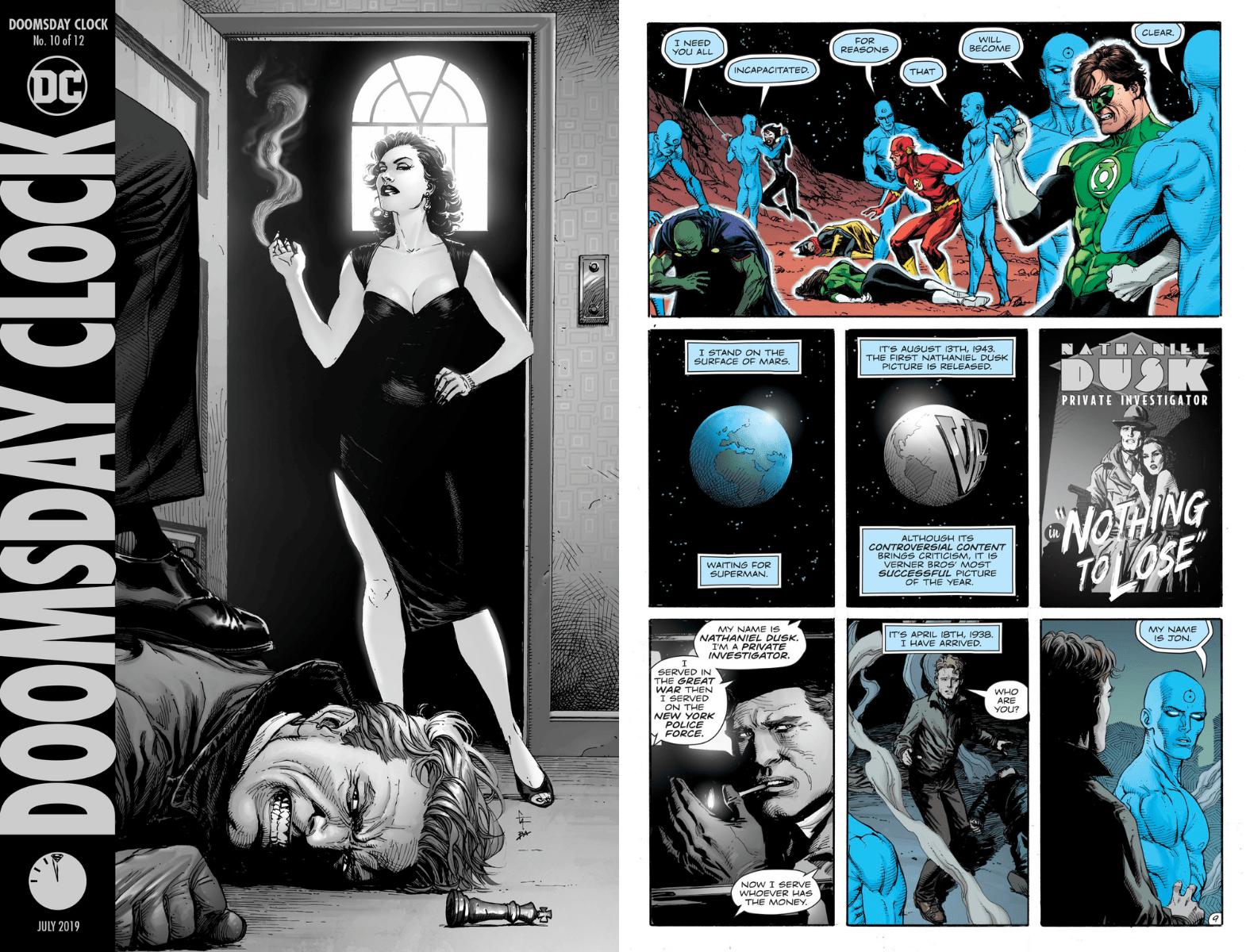 DC Comics number one book is in the discussion for the best series in all of comics. Robert Venditti and Bryan Hitch team to create DC Comics best series.

Venditti and Hitch are elevating Carter Hall from C-list character to one of the richest in all the DC Universe. Bryan Hitch might not be the biggest name in the industry but he was born to draw Hawkman. He makes Carter Hall look extremely powerful and heroic while in flight. Unfortunately issue 12 was Hitch’s last on Hawkman. Will Conrad takes over art duties next issue, the unfinished works he’s posted on social media look very promising.

Venditti set out to take the Hawkman mythos created over the years and meld them into one coherent narrative. He succeeded beyond anyone’s expectations. Readers now understand Carters Hall reincarnates across space and time. Atoning for his sins as the General of the Deathbringer armies. During the 12 issues story arc Hawkman visited past lives from Thanagar, Krypton, Egypt and the Microverse to learn how to protect Earth from the Deathbringers. It culminates in an amazing battle pitting an army of Hawkmen summoned across space and time versus Carter’s former Deathbringer brethren. 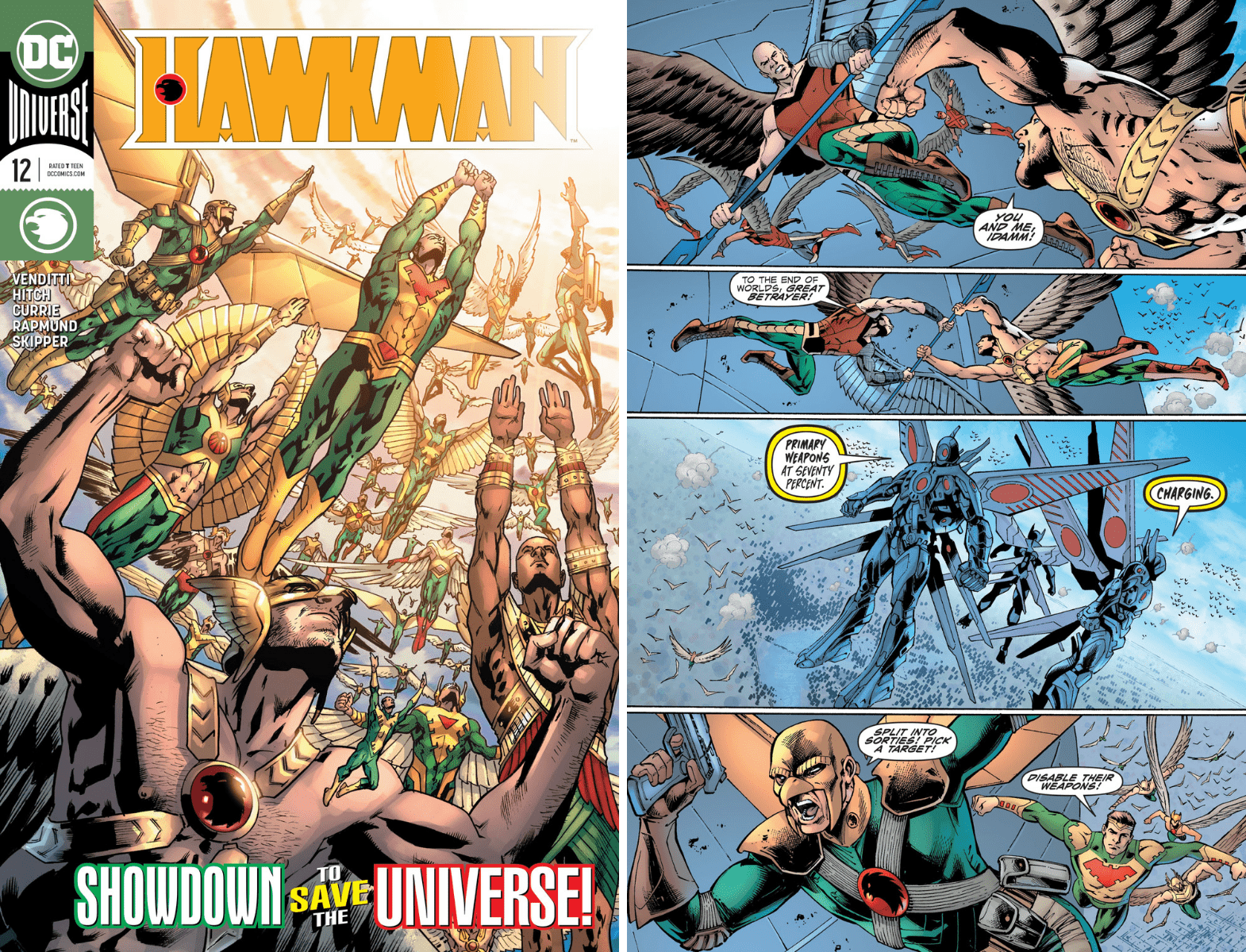 There you have it. My DC Comics Top 5 list. DC Comics top-end quality has decreased dramatically. Flagship series Superman, Batman, Wonder Woman and Aquaman are all in terrible places creatively. A majority of DC Comics best artistic talents are currently working on special projects or King and Bendis led series. DC still has a much better cadre of writing and art talent but they are being badly mismanaged by Dan DiDio and Jim Lee. Batman and the Outsiders, Doomsday Clock and Hawkman are all great in spite of their terrible leadership and direction. If DC doesn’t course correct soon they will be in the same place Marvel was 12 months ago. A publisher full of mediocre or worse titles with little to no enthusiasm for their projects. Please let me know your thoughts and your personal DC Comics Top 5 in the comment section.