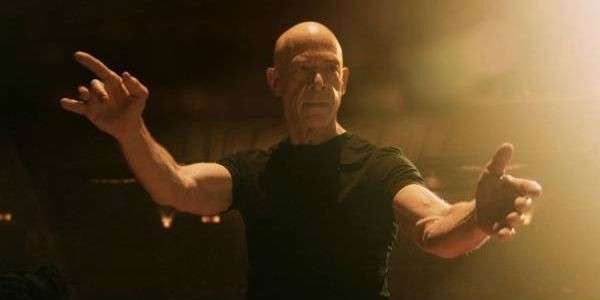 For me, part of the joy of watching director Damien Chazelle’s breakthrough movie Whiplash again is that, according to mood, you can ally yourself with either Miles Teller’s aspiring jazz drummer Andrew Neiman or with his tyrannical instructor Terence Fletcher (J.K. Simmons).

After multiple viewings, I tend to side with Fletcher, as the whiny, introverted Neiman has a strong streak of masochism which appears to egg on Simmons’ worst excesses in his teaching methods.

Which, since they include physical and verbal abuse, are obviously beyond the pale, but kind of make sense if you buy into Fletcher’s worldview:

There’s something of the MAGA-crowd about Neiman, his ‘snowflakey’ kvetching and selfishness resembling those Trump myrmidons who appear to get off on being ordered around by and emulating their deeply disturbed master.

And of course, as once rational Republicans embraced U.S. President Trump, they also adopted some of the soon-to-be-former POTUS’ knack for verbal abuse and self-justification:

Andrew (Miles Teller): I’d rather die drunk, broke at 34 and have people at a dinner table talk about me than live to be rich and sober at 90 and nobody remembered who I was.

Uncle Frank (Charles Mulkey): Ah, but your friends will remember you, that’s the point.

Andrew: None of us were friends with Charlie Parker. *That’s* the point.

Uncle Frank: Travis and Dustin? They have plenty of friends and plenty of purpose.

Dustin (Charlie Ian): Oh, that’s what this is all about? You think you’re better than us?

Andrew: You catch on quick. Are you in Model UN?

Travis (Jayson Blair): I got a reply for you, Andrew. You think Carleton football’s a joke? Come play with us.

Andrew: Four words you will never hear from the NFL.

Politics aside, Whiplash is a superb film, one combining great performances, biting black humour and an amazing soundtrack (I defy you not to tap your feet or ‘air drum’ whilst watching).

At the 87th Academy Awards in February 2015, Simmons justifiably won Best Supporting Actor for his portrayal of the oddly engaging Fletcher.