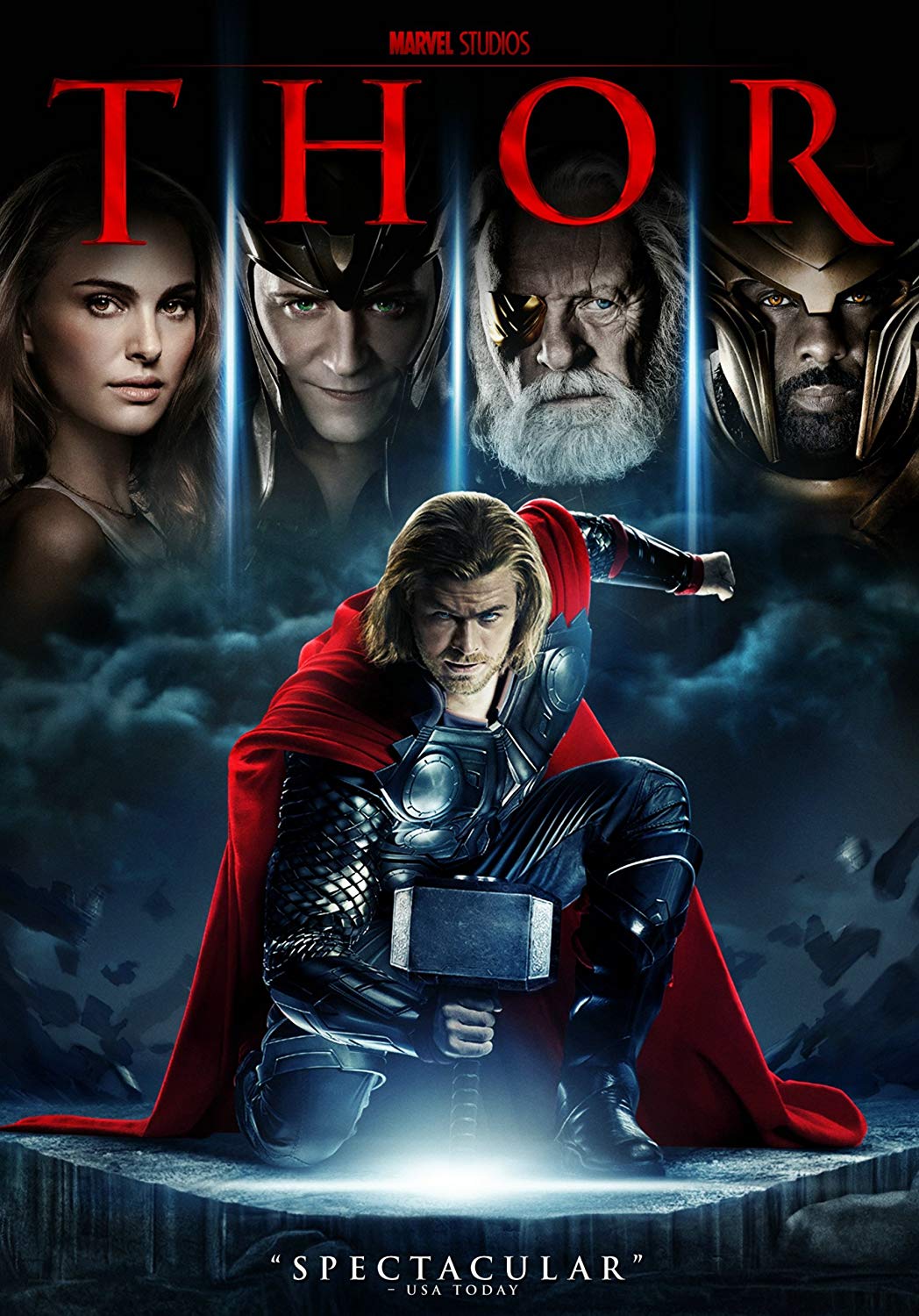 Finally, a good movie from Marvel, and most people don’t seem to like it very much.

I love about 50 minutes of this movie, the first thirty minutes and the last twenty. Everything in between those bookmarks of operatic emotion and design is somewhere between functional and pretty good.

The film opens with three people in a van in the middle of the desert looking to the sky at night. Some strange formation of clouds and light forms in the sky, they race towards it, and they find a man who shouldn’t be there. I’m not a huge fan of this tendency to start a movie after the story has started as some sort of teaser, but I think it works quite well here based on what follows. The opening couple of minutes is designed to ease the audience into the film and inform them that things are about to get weird. 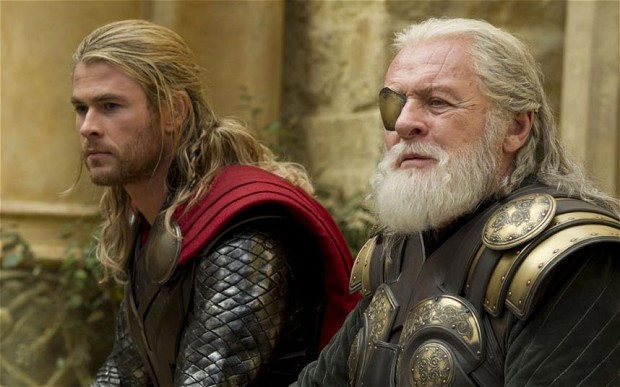 And weird do they get, and it is glorious. We fly across the cosmos to Asgard, a realm full of giant ostentation and seems to be built on a dual plane instead of a spherical celestial body. Sets are huge and covered in gold. The emotions the characters subscribe to are bold and large. The acting fits so appropriately, and we are in this cosmic opera, wallowing in its luscious details for a solid half hour and I love it. Odin, king of Asgard, tells us of Asgard’s place in the cosmos as protector and their chief antagonist, the Frost Giants of Jotunheim, another planet. He tells of Asgard’s subjugation of Jotunheim, and we see him with his two sons Thor and Loki. At the ceremony to mark Thor’s ascendance to the Asgardian throne to replace Odin, the Frost Giants sneak into the Asgardian weapons vault and are promptly killed by the defenses. 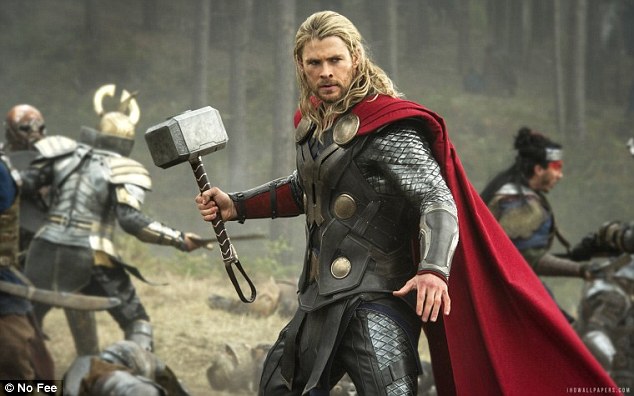 Thor is furious and demands that they travel to Jotunheim to punish the Frost Giants for their act of war. Odin bites back with fervor. I swear, Anthony Hopkins as Odin is one of my favorite things about these movies so far. He balances the large delivery of big emotions so well, creating an atmosphere that allows for others to operate at the same level of emotion. His two major rebukes of Thor are absolutely wonderful. Thor, of course, goes to Jotunheim with Loki and some pals, cause some havoc, and need to be rescued by Odin. Odin, as punishment for Thor’s senseless actions that threaten to ignite war between the two worlds, casts Thor out of Asgard and to Earth. This scene between father and son as Odin calls his oldest a “vain, greedy, cruel boy” is probably my favorite scene in Marvel.

Then the movie loses a bit of its step as its action comes to Earth. Jane Foster and her two pals guide Thor through a cute (but not too cute) fish out of water tale. Thor throws a coffee mug violently on the ground to express his approval of the drink. He walks into a pet shop to demand a horse or at least a dog large enough to ride. It’s cute. The plot turns when Thor learns that his hammer, the mythical Mjolnir, is just a few miles down the road, and he needs to get it back in order to return to Asgard. The organization SHIELD has set up a perimeter and Thor easily cuts through their defenses to reach Mjolnir but he can’t lift it from the ground because he is not worthy. He cries and gives up before Jane’s older professor colleague, Dr. Erik Selvig, gives a story that SHIELD doesn’t believe. They let Thor go in order to follow and potentially learn.

Back in Asgard, Odin has fallen into the Odinsleep (which, I assume, is some sort of hibernation that he must go through in order to extend his long life) and Loki has consolidated power through default. He works to keep out Thor from coming back. I don’t think Loki was ever as good again as he was in this movie. He learns that he’s actually a Frost Giant, and he’s deeply wounded by the fact that Odin hid that from him. On top of that, he sees Thor for the brash man who would be a disaster as king and works to undermine him in the eyes of their father. His motives are strong, Tom Hiddleston plays him really well, especially in his big moments with Odin in that first glorious half hour, and he’s smart. He’s the first antagonist in this series worthy of the name. No wonder they can’t let him go through the rest of the series.

Anyway, Loki sends the giant terminator like machine to kill Thor back on Earth. Thor sacrifices himself to save his friends, and at that moment, Mjölnir comes alive at Thor’s worthiness, flying into his hand and giving him his old clothes back because, sure why not? The Asgardians make it back to Asgard and the movie turns kind of great again. It’s all operatic all the time again. Brother against brother. Giant light bridge of rainbow light. Huge emotions as Thor crushes it and prevents him from ever going back to Earth to see Jane Foster again (yeah, right). When Odin awakes and Loki sees the disappointment in his father’s eyes for his actions, Loki just gives up, and it’s shockingly sad. Loki’s just so great.

So, yeah, I glossed over Jane Foster and her little gang of misfits. They kind of don’t matter. They’re entertaining to a degree (Selvig is the best of them), but they don’t really affect Thor’s core arc very much. Thor is humbled by his brother, and redeemed by his own sacrifice against the Terminator machine. The puny humans provide some room for Thor to demonstrate his lowered ego, but they don’t drive it. They tend to drive lighter comedy bits, but they simply don’t work as well as the big operatic beginning and end of the film.

Visually, the movie is really good beyond the design of Asgard. Kenneth Branaugh is a quality director who gets good performances from his actors (I want to see him direct Anthony Hopkins as King Lear), and he uses the visual language of the medium intelligently. His use of Dutch angles is either done to achieve interesting compositions or to imply that reality has been skewed. So we see these tilted camera angles when Jane Foster gets introduced to the world of magic through Thor but also when we just want a good shot of the warriors three standing in a line up some steps. The color pallete is alternatively vivid like in Asgard and with the rainbow bridge, dark and blue like at Jotunheim, or light brown and dry like in New Mexico.

Overall, it’s a solid film that looks great and works best at the bookends.