We’re back again with the sequel to Marvel Zombies 3! The series is written by Fred Van Lente, penciled by Kev Walker, with covers by Greg Land. Marvel Zombies 4 answers the question, “who escaped the A.R.M.O.R. facilities?” 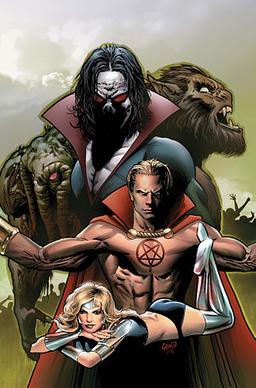 Since this is an immediate sequel to the events of 3, it should be made clear there is only one traditional marvel zombie in this book…The Zombie Deadpool’s head…aka Headpool. He was rescued by Simon Garth aka Zombie, a long standing marvel horror creation! Granted Headpool bites a bunch of creatures but few of them come off like a traditional Marvel Zombie.

Morbius and Jennifer Kale, surviving from the last mini, team up with Man-Thing, Werewolf by Midnight, and Hellstorm Son of Satan to hunt down Headpool and destroy any zombies that get in their way!

This puts them toe to toe with Black Talon, The Hood, Doormammu, and an unexpected mutation of the zombies into a cloud form! Oh crap!

This book was, overall, very good…but again it’s more of a 616 Universe story than it is a Marvel Zombie story, but unlike the Frightful story arc of Ultimate Fantastic Four, this book is all about the zombies!