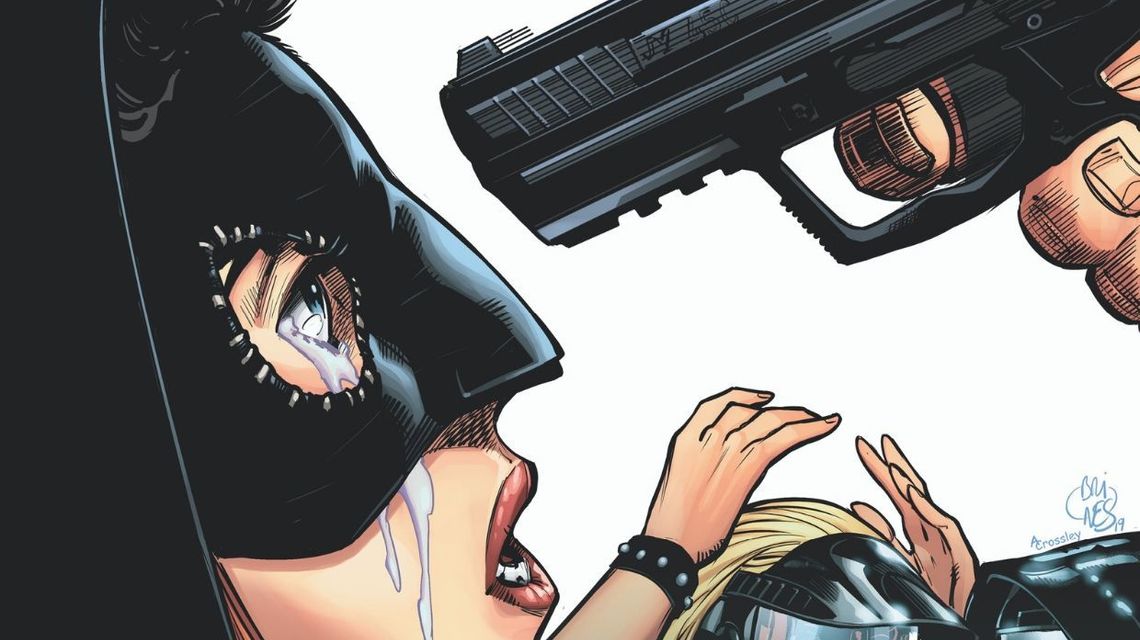 France 24/AFP’s written all about what Mark Waid and Kwanza Osajyefo’s Ignited, published by Humanoids Associates, is intended for – attacking right-wing politics in the Trump era, in a tale supposedly addressing gun shootings:

Two US authors have found a novel way to address the mass shootings that regularly plunge their country into mourning — comic-book superheroes.

It tells the fictional but tragically familiar story of six teenagers who survive a shooting at their high school in Phoenix, Arizona.

Under immense shock and stress, the teens develop superpowers. They view their newfound strengths as an opportunity to “make a difference” in their violent world, “because otherwise we went through all our pain for nothing.”

In addition to giving a voice to real-life shooting survivors, “Ignited” was a chance for scriptwriters Waid and Osajyefo to address a range of sensitive, highly topical issues in the United States — while drawing on their backgrounds with Captain America, the X-Men, Batman and Superman.

But does this include both sides of the opinion aisle? Unclear. What is clear is the direction they’re taking:

Topics featured in the first few issues include gun control, immigration police raids on Latino families, militias and growing calls from ultra-conservatives for teachers to be armed with guns.

“The ‘Ignited’ shared universe is different because it’s not really superheroes — to me, having written a million superhero comics, superheroes are about masks and capes and powers, and super villains,” said Waid.

The books’ heroes are “dealing with things on a more realistic and a more human level,” added Waid, 57.

So making allegedly conservative sources like the NRA the crooks here, not gangs like MS-13? I’ve got a feeling the extremists they speak of will be based on right-wing movements, which is way too easy.

The publisher’s owner Fabrice Giger said superhero comics are “a first for us.”

“Our logic was to approach (mass shootings) from another angle … What can we say that hasn’t already been said by others?”

The series, which had its US launch this summer and will be published monthly, has “the taste and look of American comic books but is something a little bit different.”

“We started from the basis that Marvel, DC Comics and even smaller American publishers are all politically correct … whereas we have always dealt freely with all subjects,” said Giger from his Los Angeles office, where the company has operated since 1998.

Scriptwriter Waid agreed that “because American comics are corporate owned, they have to cater to all political stripes.

Which is untrue, because for the most part, they don’t. Marvel doesn’t – and certainly didn’t when Axel Alonso was EIC, and DC doesn’t either. Why, their own leftism is what led to the collapse of their Vertigo imprint, which had been a spot for publishing creator-owned stories for nearly 2 decades, yet so far as I know, they haven’t gotten rid of Andy Khouri, the awful editor who led to the disaster.

And Humanoids’ approach to the subject matter isn’t so different given that it’s told from the same left-wing viewpoint various other companies have employed, so Giger’s statement just elicits a yawn.

“We’re a smaller company. We can afford to make some waves,” said Waid, who is director of creative development at Humanoids, the US branch of Humanoids Associates.

“It’s a timely book because, clearly, it’s about the madness that’s happening here in America.”

Could a project like “Ignited” have been created at Marvel or DC?

“Not a chance — not to this degree. We would have had to dress it up as ‘both sides are OK.’ No, listen, both sides are not OK. This is ridiculous,” Waid said.

I think he’s just miffed that, if there’s one good thing Marvel under C.B. Cebulski decided to do, it was move away from visible left-wing politics in projects like their Marvel Comics 1000 special, even though they still have extreme leftism being published in their Ms. Marvel, Captain America, and even Black Panther under writers like Ta-Nehisi Coates.

“Ignited” is drawn by Philippe Briones, a French comic book virtuoso who worked for a decade at Disney.

Briones applauded the “courageous” decision to tackle a subject as political — and as taboo — as shootings in the United States.

“Living in Los Angeles, I see how important it is here,” he said, comparing it to the idea of writing comic book stories about the Bataclan terror attacks back in France.

“That would be really tricky, personally I wouldn’t want to deal with this kind of subject,” he said.

“The most important thing is for people to speak up, and comics is a good way,” Briones added.

Let’s see if I have this right. He’s willing to draw a comic about shootings in the USA. But he balks at crafting one about the Bataclan bloodbath in 2015, committed as it was by jihadi terrorists whom the political establishment practically allowed to breed within? I’m not sure I can see the logic here. How can you speak up if you only apply the arguments selectively?

So it looks like this amounts to another liberal-influenced project that’s little different from any produced at the Big Two past and present, their claims to the contrary notwithstanding. If Humanoids thinks they’re making a genuine breakthrough in the US market, they’re mistaken. They’re just taking a cheap, easy route that likely doesn’t tackle the challenging issue of education, in families and schools, and asking whether that’s got to hold some accountability. If not, they haven’t accomplished a darn thing.