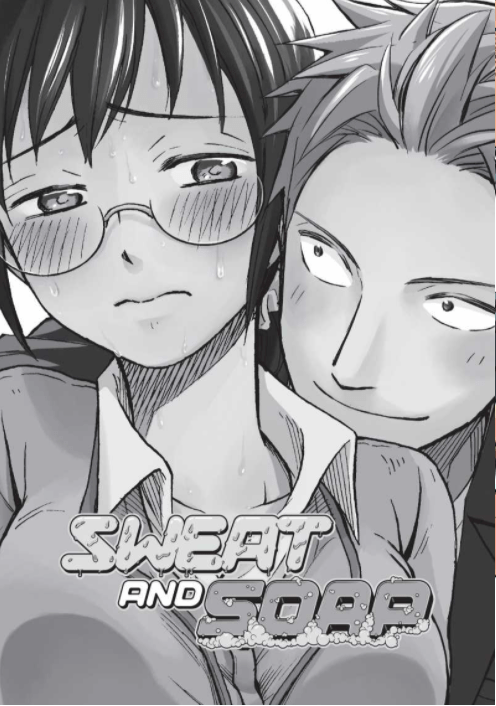 Asako Yaeshima, is a 26 year old woman with an unusual problem. She perspires excessively, and with minimal impetus, which in turn generates a pronounced body odor. Asako has a desk job in Lilia Drop’s finance department. Her daily routine consists of numerous trips to the restroom at work where she dries herself off with body wipes, and applies copious amounts of deodorant.

Kotaro Natori, is a 29 year old man with an unusual talent. He has a highly developed sense of smell that he’s trained since childhood, being able to pick out individual scents from a myriad of others with clarity, and identifying them with unerring accuracy (think Jean-Baptiste Grenouille from Patrick Suskind’s novel Perfume, only without all the murder, and a healthy dose of eccentric charm instead). 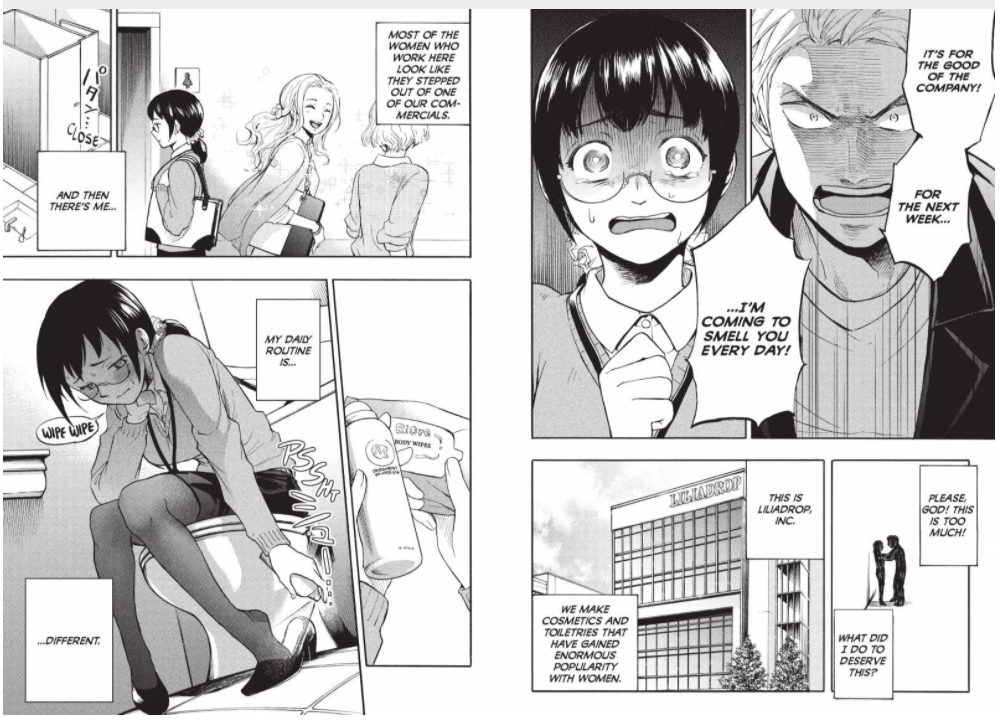 Not surprising, Kotaro is the star planner in the product development department at Lilia Drop because of this talent, having designed the majority of the high selling, great smelling shampoos, and bath soaps the toiletry company produces. The two encounter each other when Asako gets excited (and perspires) upon seeing the display in the company lobby for the upcoming Summer product line, and Kotaro happens to catch a whiff of her while passing by, becoming instantly infatuated!

In what would be an HR nightmare under any other circumstances outside of escapist fiction, Kotaro drags Asako out of the lobby, and into a nearby boardroom to get another sniff. He demands that she let him smell her every day for a week, stating that while having come up with all the recent top sellers at Liliadrop, he’s got no ideas at present with an important meeting looming a week away regarding the Winter seasonal line, and her scent can help him brainstorm. 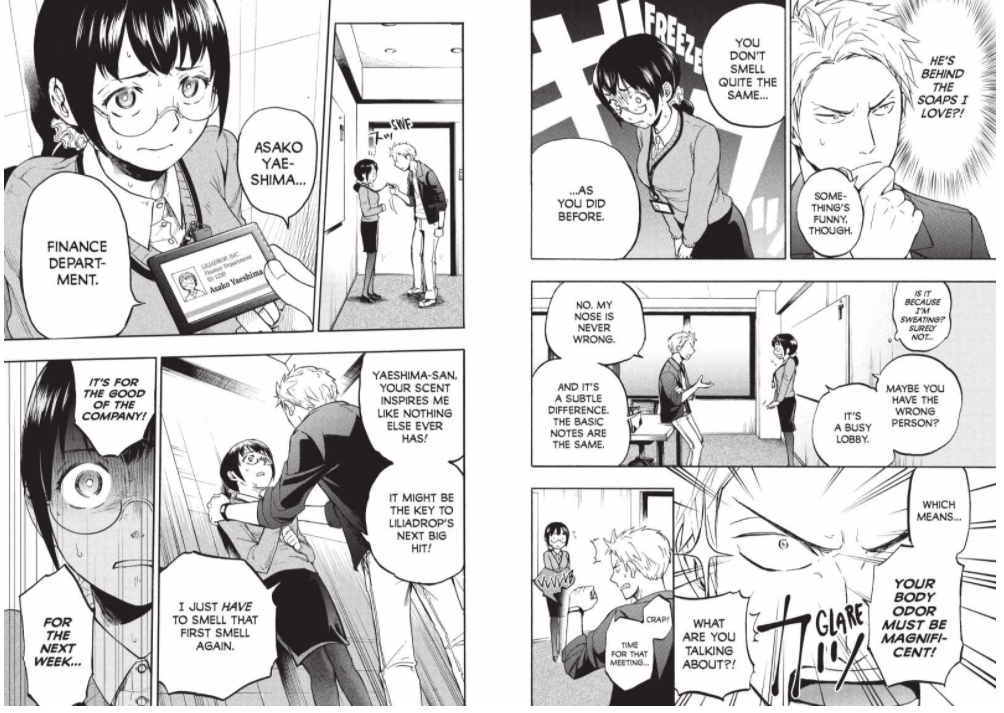 Reluctantly agreeing to be his muse, Asako is subjected to Kotaro’s daily sniffing, and the two come to know each other on a friendly basis. When Kotaro tells Asako the presentation went great thanks to her, she is overjoyed, the excitement causing her to perspire again, creating the same smell she had produced a week before in the lobby. Kotaro explains to Asako that this is the smell he was drawn to, and that it is a result of her feeling happy, as people produce different smells based on their mood. He then proceeds to make advances towards her, but is rebuffed by Asako when she shoves him off, then promptly flees.

Later on, in an attempt to reconcile with a sincere apology for his advances, Kotaro inadvertently deters a groper from accosting Asako on a train, and the two manage to clear the air. Kotaro hoping they could at least be friends still, and talk shop about soap together, while Asako admits that she loves his soaps, and that she’s grown accustom to him smelling her. What follows is a night of passion between the two, and the start of their romance.

The mangaka, Kintetsu Yamada, keeps the story grounded after the first chapter with maturity one might not expect given the wild start, building the two characters with care, making the situations presented in the following volumes (four out at present) feel organic, and genuine, based on what they have in common.

Asako, and Kotaro both smell. 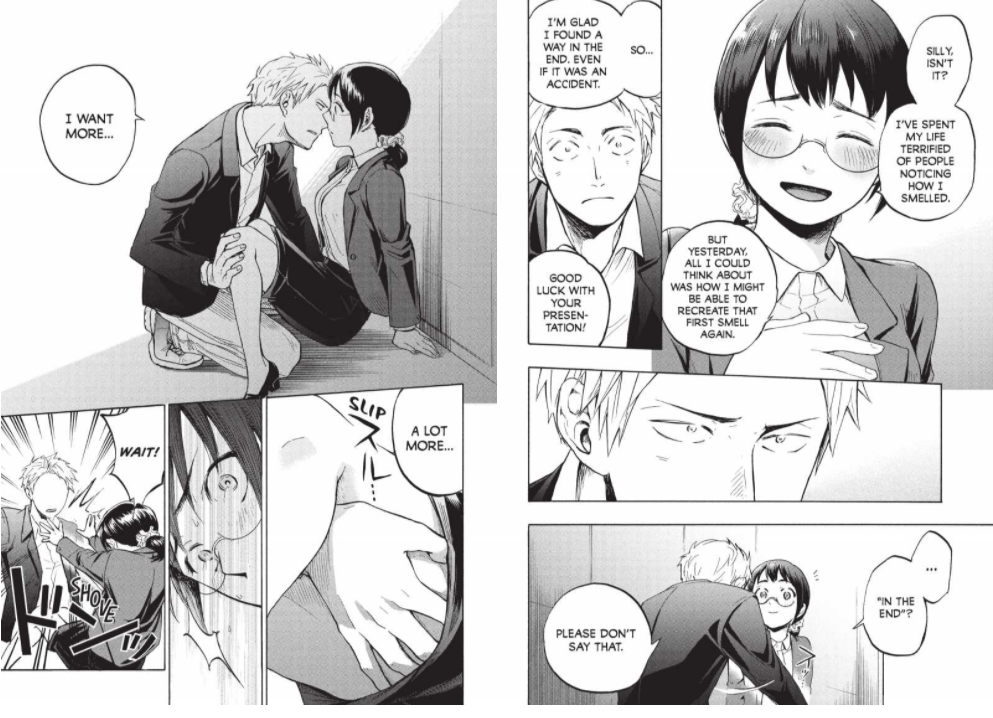 That is, Asako’s body literally smells when she sweats, and Kotaro smells literally everything. Asako’s reason for working at Lilia Drop has its roots in her childhood, where, she sweated often, and stank, causing her peers to tease her mercilessly, giving her the unflattering nickname “A-Stinko”.

Avoiding physical activity whenever possible to prevent sweating, eventually Asako started using Lilia Drop products in her adulthood, which proved to be the best at covering up her odor, and had the most enjoyable aroma of their own.

Kotaro’s past, while different, becomes complimentary. His mother went completely blind when he was young, and he started helping her with her garden, observing how she enjoyed the smell of things she couldn’t see anymore, but still found the same comfort and pleasure in. This caused him to develop his olfactory senses, and pursue fields of study related to aromas, which then led him to his success at Lillia Drop as one of its lead soap designers.

Asako, and Kotaro are mirrored, completing each other by fulfilling their respective needs. The old Japanese proverb “A repaired lid on a broken pot” is perhaps at work here. The proverb describing the idea of two damaged things, though not quite the same, resemble one another enough to be paired.