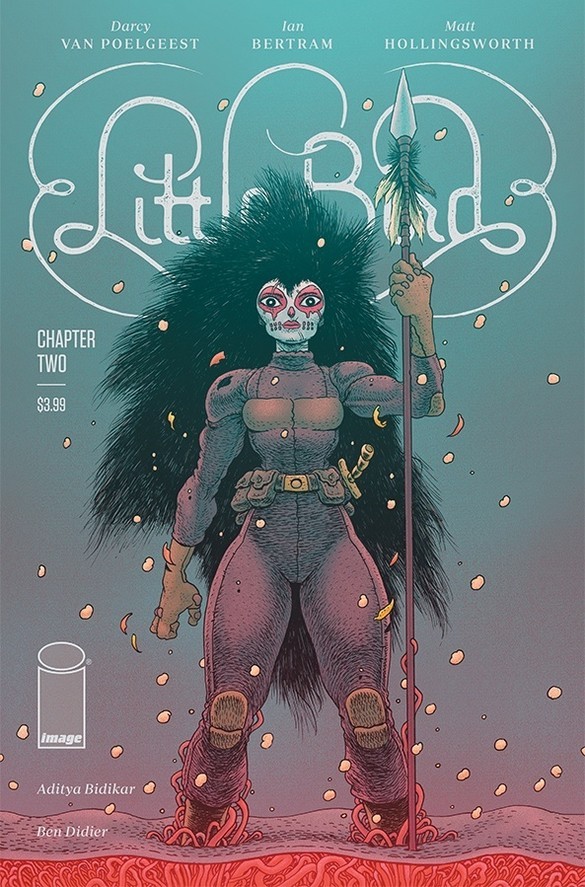 “Little Bird”, by Image Comics, follows the eponymous main character who must venture into an insane asylum/prison run by the brutal theocratic, fascist state of North America and Canada in order to free “The Ax”. You can watch my review of issue #1 here.

The story is written by Darcy Van Poelgeest, with art by Ian Bertram. I prefer a more realistic art style than what the comic shows, but much of the art was compelling. The story takes placed in a dystopic future where a Theocratic United States has come to dominate a global empire that threatens the welfare of the entire planet. A noble group of Native American resistance fighters have sent a young member of their tribe named, “Little Bird” to free a Paul Bunyan figure named “The Ax” who is being kept in a bizarre prison / psych ward.  Issue two follows the escape attempt at Ax’s prison cell, and we follow Little Bird’s journey back through the spirit realm and back to the land of the living.

So far, this title has demonstrated all the Americans represented are horrible, grotesque people. Their religious leader is shown actually bathing in blood… in a bathtub. Contrast that with all the Canadians being shown as rugged, noble people seeking to oppose the Christian Fascists of the United States. After reading this comic, you will not need to wonder if President Trump is writer Darcy Von Poulgeest’s President.

What No Comic Book Professional Can Read
Elon Musk Buys Twitter - and the Meltdowns Have Been Glorious
Savage Dragon Creator Reveals His Inner 'Toxic Fan', Then Bends Knee
Proving Our Point: Image Comics' Workers Union Quickly Goes to War
'Saga' is Back at Image Comics, Along with Its Far-Left Politics
Todd McFarlane's 'The Scorched' #1 Sets Another Comic Sales Record
How the CBWU Will Undoubtedly Harm Image Comics' Bottom Line