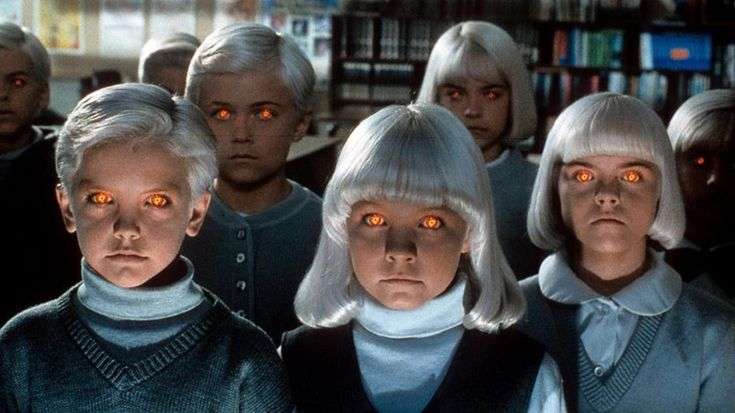 #22 in my ranking of John Carpenter’s films.

Ugh…just…it’s hard to believe that John Carpenter, who took the duties of remaking Howard Hawks’ The Thing from Another World and executed so well could remake another 50s science fiction film and fall on his face so thoroughly. Carpenter has gone on to say that he took this job as merely a paycheck, but his comments from the time show a surprising enthusiasm for the project, revisiting another childhood favorite film. I think some of my problems with this extend to the source material (though I’ve never read the original book The Midwich Cuckoos by John Wyndham or seen the original film by Wolf Rilla), but there’s a really brief move from the first to second act that feels like its missing twenty minutes of really important stuff. That missing material undermines everything that comes later, creating an empty bit of spectacle that fails to impress on any level. It ends up feeling shockingly pedestrian. 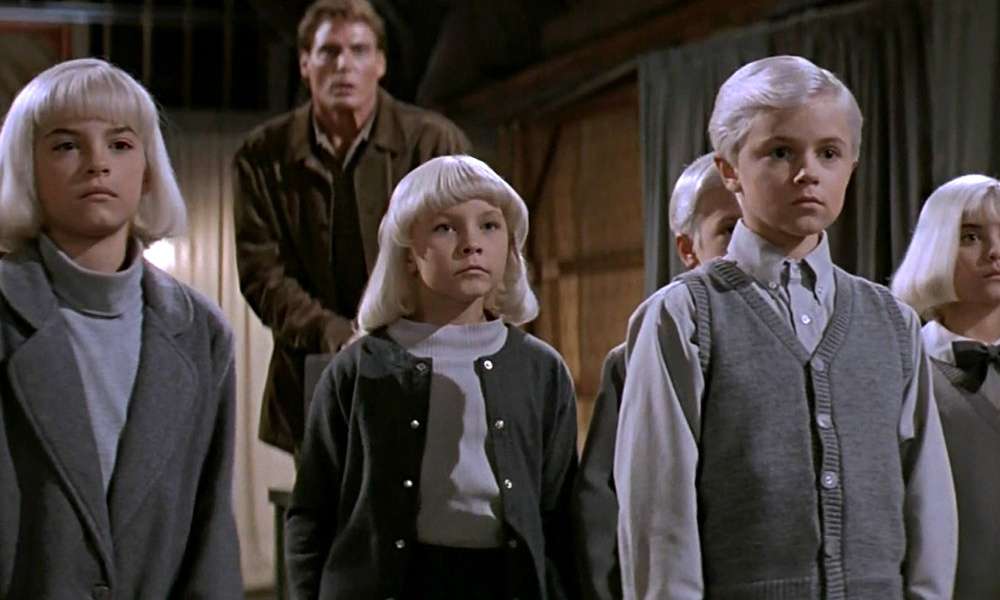 The town of Midwich in northern California is a quiet community of a few hundred people, and they’re mostly gathering together at the school to help raise funds for a bus. Everyone within the town borders blacks out for about six hours leaving only the town doctor, Alan Chaffee (Christopher Reeve), free from its affects since he’s gone one town over to see someone. His wife, and everyone else is unconscious until everyone miraculously wakes up with no seeming side effects other than a handful of people who died because of where and how they fell. Everything seems fine, though the NSF scientist, Dr. Susan Verner (Kirstie Alley), showed up immediately and seems to know something about what happened.

Weeks go by, and it turns out that ten women are all pregnant, with their start date all the date of the blackout. These are a mixture of married and single women, and there’s even a woman whose husband had been in Japan for a year. This opening is fairly effective and the start of a better movie than what we eventually get. There’s an underlying sense of unease about what’s going to happen because the event defies any kind of explanation. Then all ten births happen, and the movie begins skipping ahead. 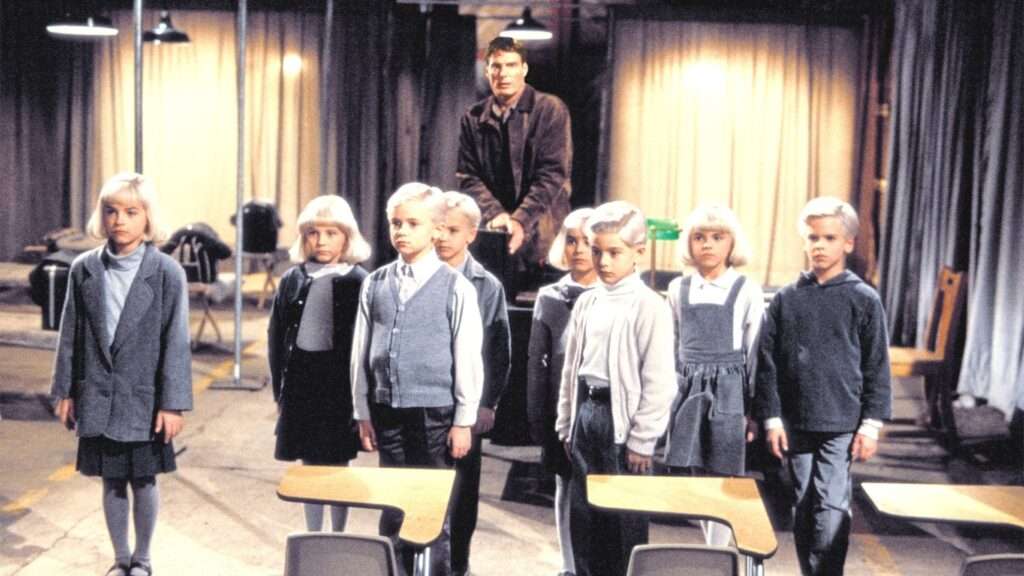 I would be surprised if the original novel didn’t include the idea of all ten children looking essentially alike with identical silver hair and wearing similar clothes, but I kind of think it was a mistake. I understand the effort to set them apart from regular kids in an easily identifiable way, but I think the horror of kids being that obviously different from normal kids (of which there are pretty much none in the film) undermines the basic idea of something that should be innocent turning out evil. I think they should have looked like normal kids, is what I’m saying. Yes, there are explanations for it (something about DNA being the same like they’re all siblings meaning that they are purely implants and not actually the children of the women), but I just don’t think it makes for good horror. 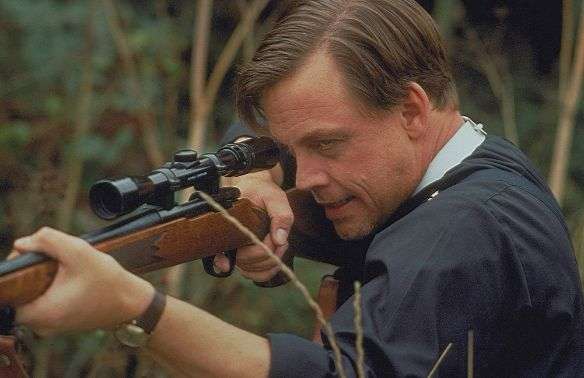 Another thing about this film that I think undermines the horror is the setting. The remote town is good, but setting it in the modern day prevents the little town from feeling too remote from the rest of the world, and into this comes a representative of the federal government. I don’t think it helps that Kirstie Alley, an actress I have no issue with, doesn’t feel right for the kind of no-nonsense government employee who’s willing to break ethical rules to get what she wants. She just doesn’t have the right conviction, but that’s not the big problem. The problem is that the town is remote, so it should feel like these people are dealing with this issue alone. Having a federal government employee there to eventually explain a bunch of stuff doesn’t allow for that remoteness to stay feeling remote. Having Dr. Verner there makes things feel more normal.

Now, that’s all an issue, but my biggest problem is the waving away of the first ten years or so of the children’s lives. We get one quick scene where one child convinces her mother to put her hand in boiling water before using her weird powers to convince her mother to jump off a cliff. There’s no real time dedicated to getting these parents emotionally tied to their children, no matter how alien they may end up being. I think that lack of attachment is really weird, and it makes the final half of the film feel off. The complete lack of attachment, after a pretty decent first act that built up most of these parent characters, doesn’t feel right. Most of the parents end up falling off the face of the movie anyway, and the few that do stay around have so little screentime that their sudden change in attitudes from the beginning are jarring at best. There’s real whiplash in the second half that the movie never gets over.

Another problem is the children themselves. Beyond their look (which I don’t like), they’re surprisingly unthreatening. Now, that may be a weird thing to say about a movie predicated around children with psychic powers that force people to suicide themselves, but the manifestation of these powers is surprisingly reactive. They don’t go around finding people to screw around with. They mind their own business, and then the janitor comes up and starts threatening them, eventually hitting one of the face, and they then force him to commit suicide. Is it too much? Of course. Is it the work of a movie antagonist that needs to be blown up with dynamite? I’m not so sure. It’s made all the murkier by the fact that the children remove themselves from the town to live in a remote barn with the explicit goal of not interfering with humanity. This is a mess of an ending.

There’s more going on, but it ultimately leads to little beyond a stinger for a potential sequel that never materialized. This movie is just a disaster of a film. The horror never connects. The characters fall apart completely. The storytelling is unclear. A promising if unspectacular opening act just spills into confused nonsense for the last hour, and there’s nothing to really recommend. This is Carpenter’s worst film by far up to this point in his career. Thankfully, he could never possibly reach this low again. Right?