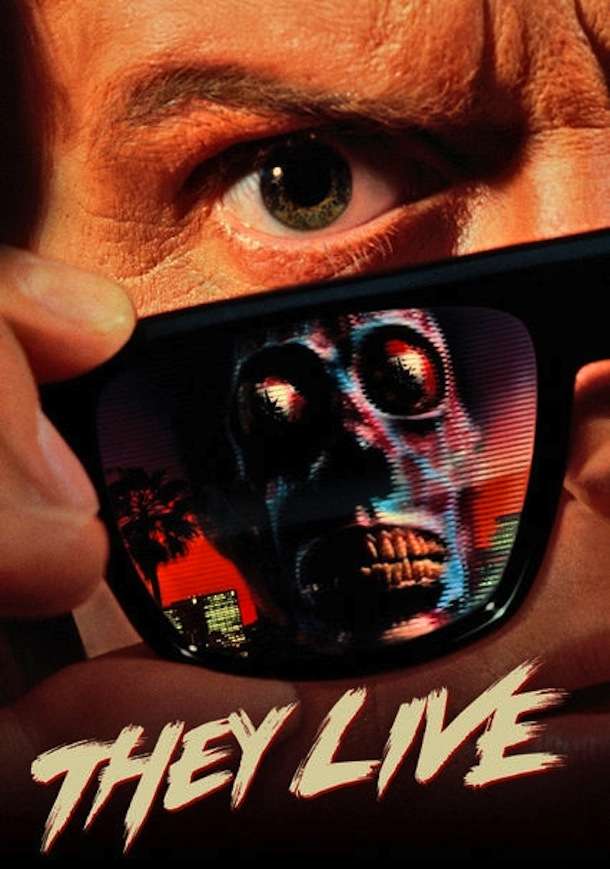 #18 in my ranking of John Carpenter’s films.

My tastes in movies are pretty mundane, I think. Almost everything a movie fan is “expected” to like, I like, and most things I’m not “supposed” to like I don’t. It’s definitely not some effort to fit in with a particular set of movie fans (most of my movie conversations cheerfully take place with people who have vastly different tastes than I do), it’s just how my tastes align. That being said, I’ve never been able to see the real appeal of They Live. I’ve seen this twice now, and I surprisingly had pretty much the exact same reaction now as I had the first time I saw it about fifteen years ago. I was kind of indifferent to it. There’s entertaining stuff, but what this movie is really remembered for is about a twenty-minute section in the middle of the film, and I think that’s because the movie outside of those twenty minutes doesn’t make a whole lot of sense. 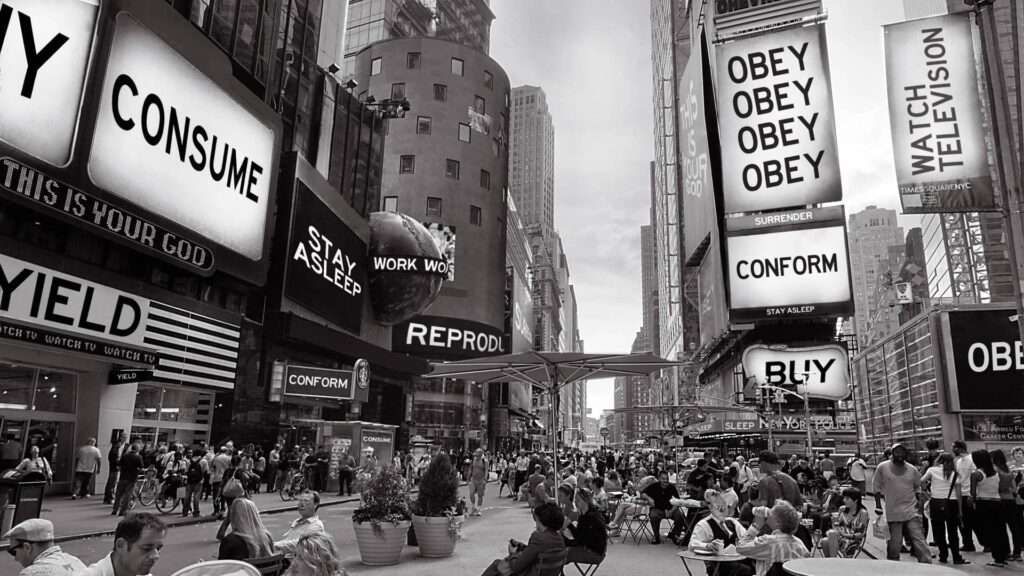 There are interesting parallels between Carpenter’s 1988 film and Martin Scorsese’s Taxi Driver. In both, a man, detached from anything permanent, arrives in a new city to take a job. Both end up finding their cities overrun with people that disgust them, and both end with the central characters taking loaded guns to exact justice. In Scorsese’s tale, it’s told from a place of depression. In Carpenter’s it’s told from a place of pure rage. Emotions are strong places to tell stories from, but they also have this tendency to driving the writers away from the less interesting parts of building a narrative like structure. It’s all about the core emotion, and anything else tends to get pushed aside. Come and See is an example of a great film born from pure rage, put together with care at creating a very specific emotional reaction that the film is asking the audience to share. They Live seems to operate under the assumption that everyone who watches it will share Carpenter’s emotion and objects of hatred from the get go. 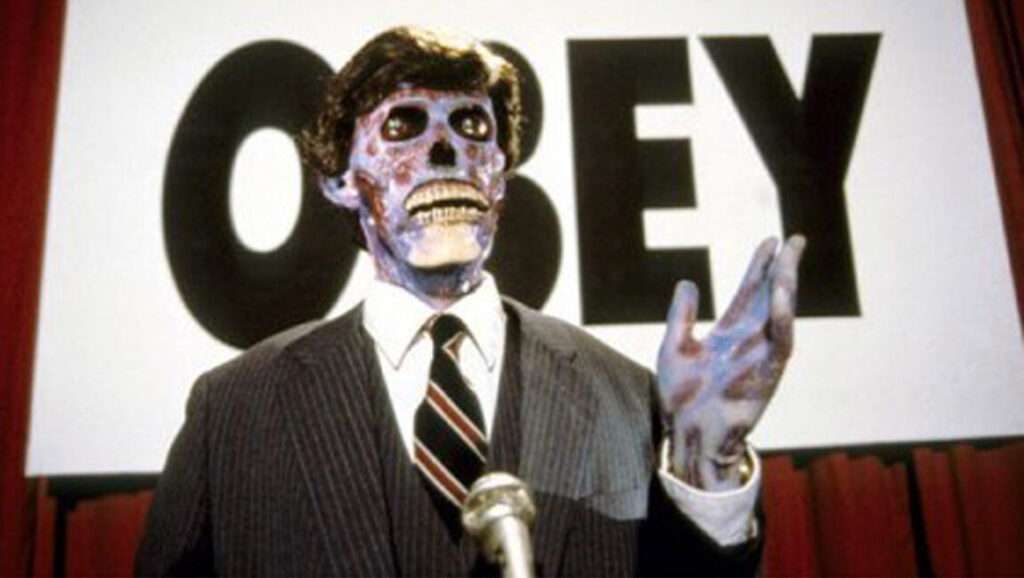 It’s hard not to see this as part of Carpenter’s frustrating career, working hard within the system to deliver what people want and getting rejected when he puts himself out there (The Thing, Big Trouble in Little China), and I do think that’s part of the anger here (the talk of “selling out” feels key to that). However, Carpenter has said on more than one occasion that this film is about one thing, and one thing only: Reaganism, and boy did he hate Ronald Reagan. Can he make a great movie where the central point was hating Ronald Reagan and his economic policy? Yes, he very much could have. Did he? I don’t really think so. 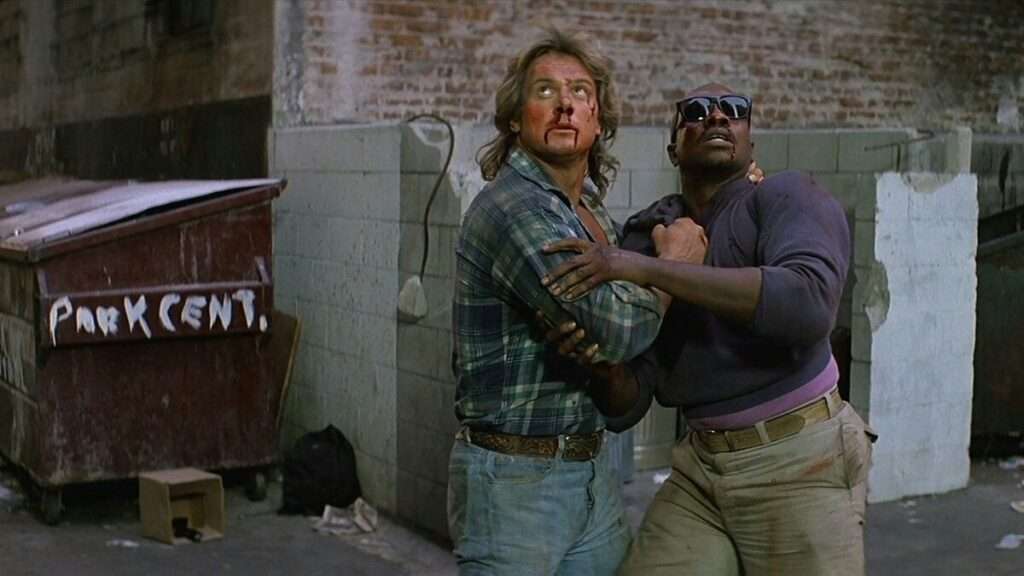 The problem, I think, is that the bad guys are never really defined clearly. Nada (Roddy Piper), shows up in Los Angeles and finds a job at a construction site. He stays the night in a small homeless encampment across the street from a church where a pirate signal is going out trying to cut into the signal from a cable channel with a satellite dish (sure, okay). Very soon thereafter, the police show up and clear out the camp. Now, this is one of the keys to hating the antagonists of the film, and I’m going to be honest, it falls short. Going after a pirate signal isn’t the action that takes me immediately away from them. Clearing out a homeless encampment isn’t either. I think the level of violence is supposed to be a trigger, but, surprisingly, the violence is rather tame. 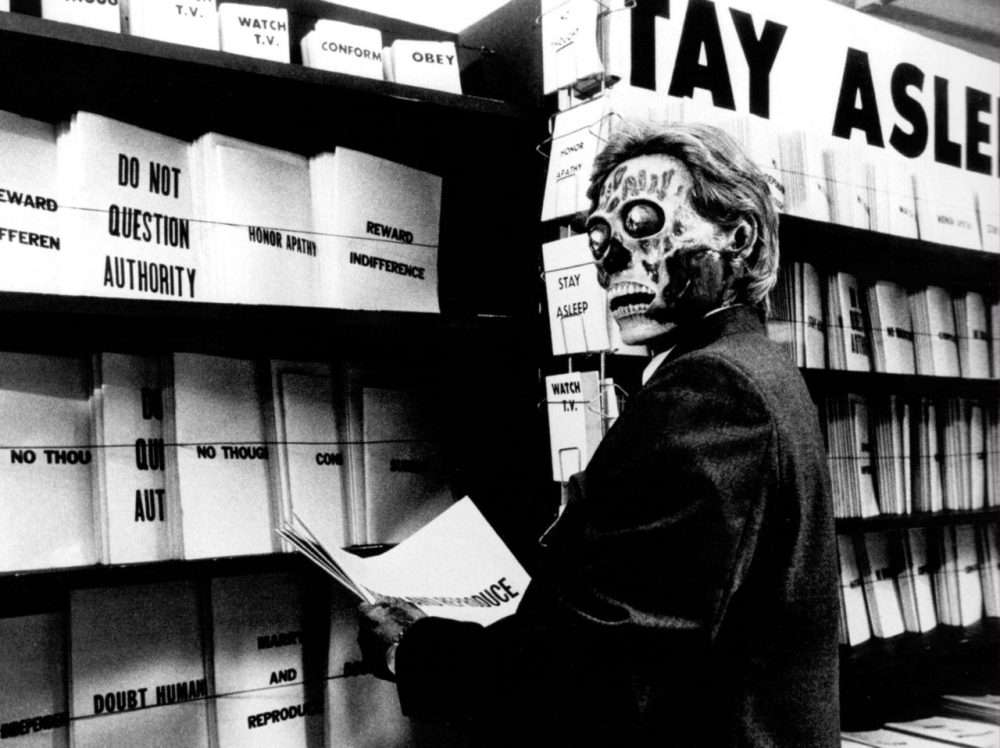 Separated from his nascent bit of civilization, Nada finds himself with a single pair of sunglasses that show him a hidden world just under the surface. Every ad, magazine, and sign is telling him to buy, consume, and obey. This is the stuff that the movie is known for, and it’s a great image. However, it’s also surprisingly pedestrian. Ads want you to consume? Yes, they do. It’s not exactly a secret. The more insidious part is that there are creatures among us, disguised as humans, and the sunglasses show Nada who they are. They’re ugly, looking more like decaying corpses (by design) than living creatures, and they control everything. After Nada takes out a few in a bank with a shotgun, he runs back to the one man who was nicest to him, Keith David’s Frank. News of Nada’s rampage have reached Frank, and he’s unwilling to meet with a murderer. Nada needs someone to confide in, and the two end up in the famous five-minute alleyway fight. The fight itself is brutal and realistic in ways that most fights aren’t with the two landing punches and needing time to recover from their injuries, but I find a hard time really getting into it because the ask from Nada is so small: to put on the glasses. I get the masculine urge to not bow to pressure on Frank’s part, but there are instances where he has the glasses up to his face and is this close to putting them on where he could see through them that it just kind of breaks up the fight for me a bit. I admire it technically, but I find it kind of frustrating to watch. 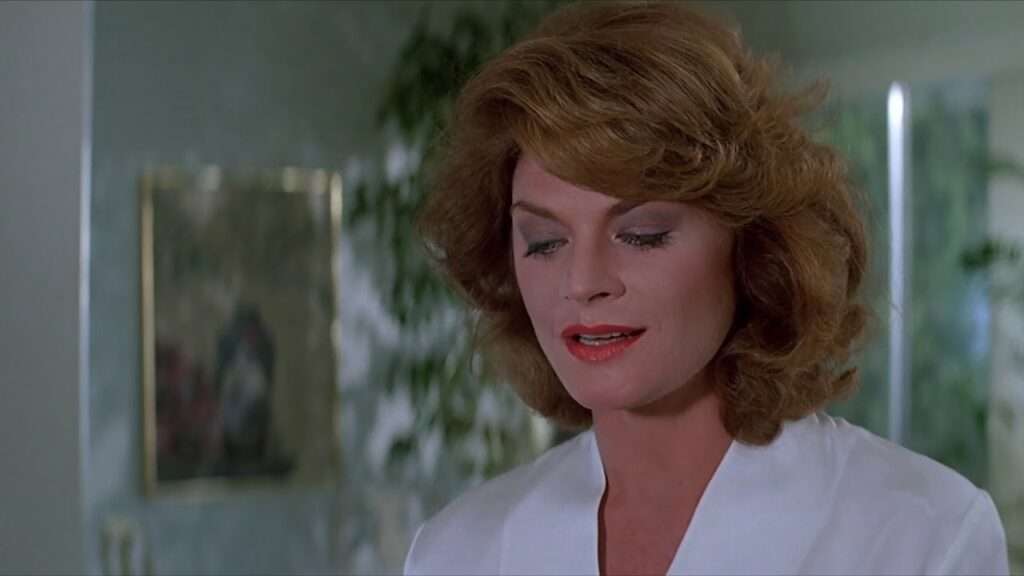 Then the movie stops being famous, and we get our confused third act. It’s confused because Carpenter isn’t really sure what we’re all supposed to be mad about. The great sin that gets repeated a couple of times in the latter parts of the film is humans “selling out” to the aliens. The homeless encampment is never mentioned as Nada and Frank get together with an underground cell of freedom fighters (sold out by a woman who really should not know where the meeting was happening because the movie never bothers to explain it), and then they end up at the alien headquarters where a human, recently accepted into the alien ranks somehow (this world building is…let’s just say incomplete), decides to show them around without any sort of guard. It’s here where the “sin” is really spelled out, the selling out, and it’s odd. I get it in concept, joining up with an oppressive, insidious, and covert alien force that’s trying to strip mine the planet, but it’s unsupported dramatically. A smarter script would have made that core goal of the aliens part of the first act instead of the homeless camp, but Carpenter was writing from a place of anger and didn’t think through his dramatic structure all that well. More ends up getting made of the selling out than the strip mining, and that’s why I can’t really separate this film’s basic point from Carpenter’s troubles with the studio system. He had tried to work in it, keeping who he was as an artist intact, but he struggled under the strictures of the organizations and ended up making compromised works that he couldn’t really stand behind fully. Going full corporate was selling out to a degree (ironically, his next film, Memoirs of an Invisible Man, is him fully selling out). 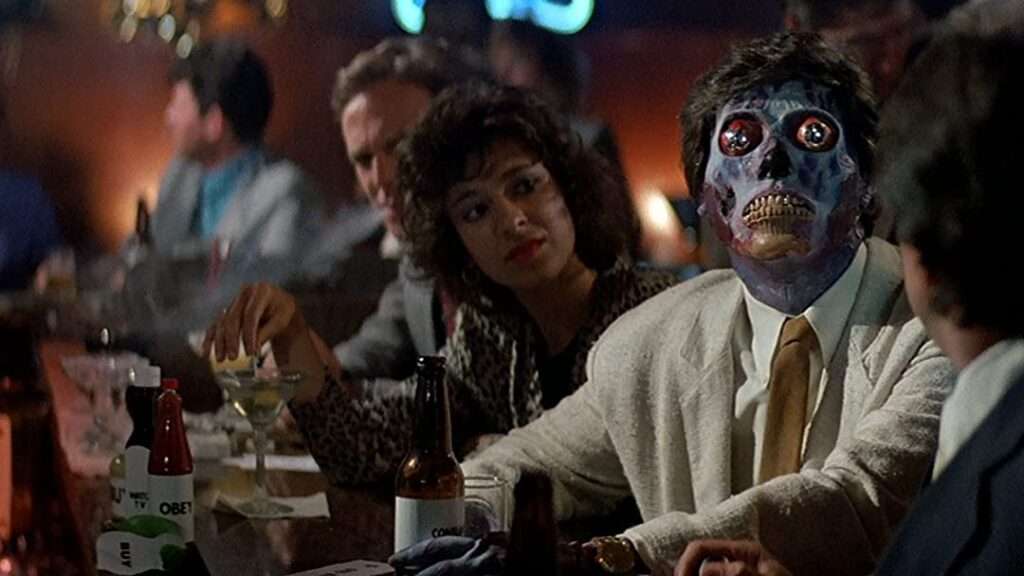 On a certain level, I get it, the appeal of the movie. The concept is cool and some of the key moments are executed with a certain appreciable style. However, the movie simply doesn’t work all that well as an actual story. It’s poorly built with jumps in logic and a muddled central point. Being creative purely through emotion has some advantages, but it also has serious drawbacks. If Carpenter hadn’t been promised carte blanche from the get go, he might have found the time to hammer out the script a bit more before shooting. As it stands, I find They Live an ultimately frustrating film experience that’s more important for a central twenty-minute stretch than actually an enjoyable or engaging story to latch onto. 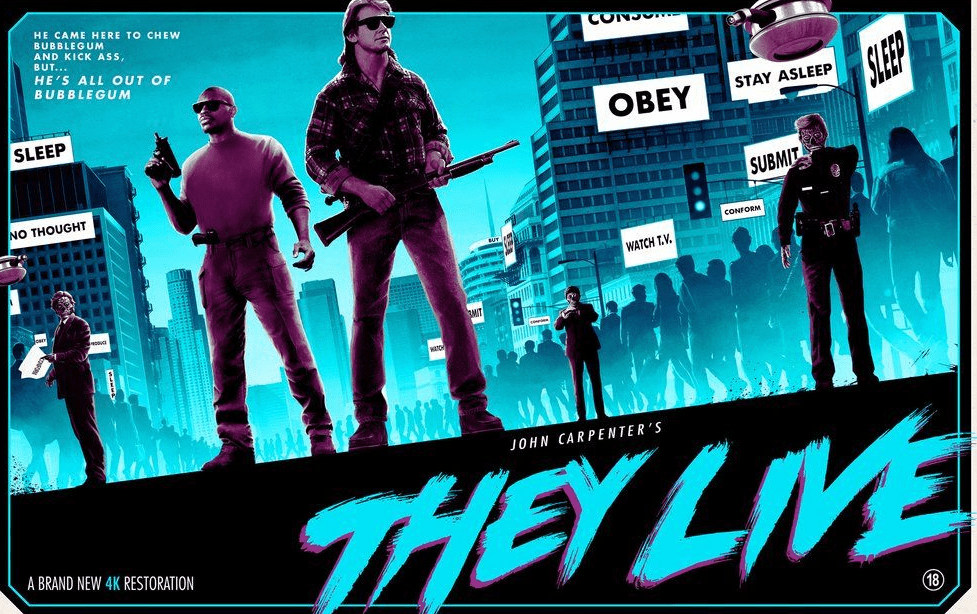