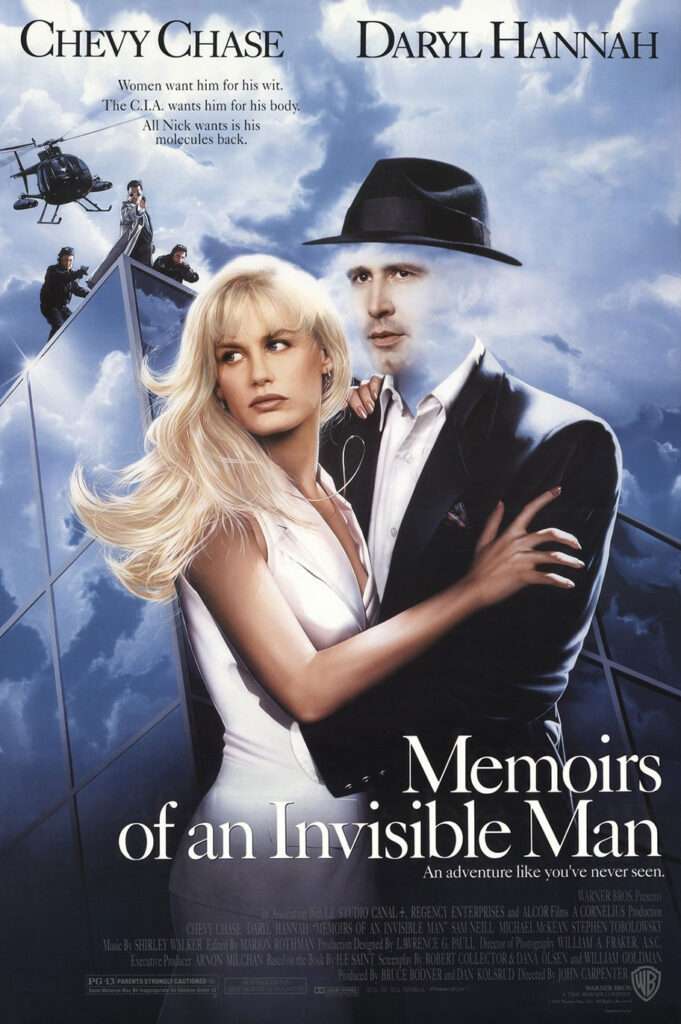 #17 in my ranking of John Carpenter’s films.

This Chevy Chase vehicle was originally going to be directed by Ivan Reitman based on the novel of the same name by H.F. Saint. After weeks of clashing with Chase in pre-production Reitman gave an ultimatum to the producers that either Reitman left or Chase would leave. The producers chose Chase who had been working to get the movie made with him as the star and as a vehicle to dramatic roles. The central problem of the film, though, is Chase himself. He’s wrong for what the role demands, and it’s especially problematic in the movie’s first act. Carpenter worked hard to make the film’s script work, brought in because of his special effects experience and lack of other work at the time, but there was only so much he could do with Chase.

The story is about a stock analyst, Nick (Chase), who falls in love with the beautiful family friend, Alice (Daryl Hannah) of a colleague George (Michael McKean). Hungover, he goes to listen to a presentation at Magnascopic Laboratories and, through an accident, ends up asleep in a small sauna while the company’s equipment goes haywire. When he wakes up hours later he and half of the building are invisible.

Now, the character journey that Nick follows is that he’s supposed to be this invisible person to begin with who becomes fully invisible through science fiction nonsense and has to learn the true loneliness of invisibility. That would be fine except that, well, Nick is played by Chevy Chase. The character of Nick, as written, needed someone quiet and unassuming in the role. Someone like maybe Kevin Costner or Robin Williams in dramatic mode would have been able to pull off the earlier scenes of Nick trying to avoid any responsibility at work, attention at a bar, or even having to do anything at a symposium much more realistically. Chase is too abrasive and sarcastic. He’s essentially playing himself in these early scenes and when someone describes him later as being invisible in his earlier life, I felt like the character was talking about someone else. The entire first third of this journey is wrong simply because Chevy Chase chose to play himself. I’ve read a tiny bit about how much of a nightmare Chase was on set (mostly around his dealing with special effects makeup), and it seems like Carpenter couldn’t convince Chase to do anything in terms of his performance. I would be unsurprised by the news that Carpenter told Chase to downplay his personality in the early scenes, and Chase simply refused. 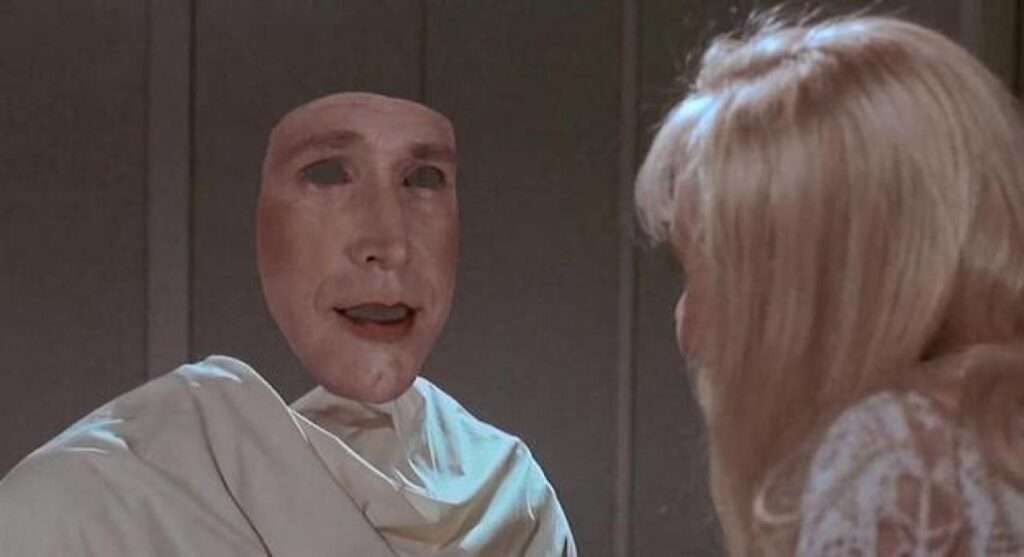 Anyway, the movie gains something once the main character goes invisible. Carpenter used every trick in the book to sell the idea of Nick being unseeable, and so much of it holds up today. It starts with a giant set of the building with shards of the seeable and unseeable crisscrossing all over the place. We get opticals and neat in camera tricks to show the invisible Nick manipulate his environment. After selling the idea, we get to see Nick with the understanding of his situation so we’re not relegated to just hearing Chase’s voice for the rest of the movie. It’s a strong combination of techniques that really does sell the physical situation quite well.

Into the scene walks Sam Neill’s David Jenkins, a CIA operative out to find Nick and turn him into an intelligence asset. Growing up, I’ve always associated Neill with Dr. Alan Grant in Jurassic Park, the collected paleontologist, but over time I’ve discovered that his real gift was in odder, more dangerous roles like this, Possession, and Carpenter’s own In the Mouth of Madness. He’s the single best actor in this film, and he carries his part of the movie almost single-handedly. Seeing Chase and Neill in the same shot, and it’s almost embarrassing for Chase because Chase simply isn’t nearly as good of an actor. Neill’s David is a completely amoral monster out to get what he wants in Nick no matter what. He’s going to use whatever tools at his disposal to climb the CIA ladder through CIA means, and nothing is going to stand in his way, least of all his boss (Stephen Tobolowsky).

The rest of the movie is a chase between David and Nick with Nick getting away only for David to find him again. There’s a break where Nick goes to George’s vacation home where George brings a few guests, including Alice, a few days later. This is the meat of the character part of the movie, and it’s some of the most frustrating. Again, Chase was wrong for this role. He shepherded it through to production because it was essentially a vanity project to get him more dramatic roles, but he is simply not that good overall. He’s also too smarmy and sarcastic, undermining a lot of the emotional beats. I wouldn’t go so far as to call him bad here, but he’s never more than serviceable where a stronger actor could have elicited real pathos. Across from him is the very pretty but also limited Daryl Hannah. These scenes are actually quite well-written, as Nick tries to undo this feeling of true invisibility (undermined by the fact that Nick wasn’t an invisible personality in the first act), but they just don’t carry the emotional weight that they should.

The final act is the fulfillment of the chase as David tracks down Nick, and it’s a technically polished piece of filmmaking. It’s a trek through San Francisco with Nick using his power in interesting ways to end the journey. It’s solid genre stuff, and a decent way to end the film.

Overall, it’s a very mixed bag. Recasting Chase would have been impossible, but it would have probably been the single best thing that could have happened to this film. It’s also interesting because this movie contains almost none of John Carpenter’s voice. This was purely an exercise in paycheck filmmaking from him. He was working in a studio after two independent movies where he was given complete free reign creatively, and he couldn’t control his two main actors. It’s also kind of funny because his previous film, They Live, had the central moral failing of humanity being “selling out”, and that’s exactly what he did here.

It’s a slight entertainment that could have been made better. As it is, there are worse ways to spend 100 minutes.