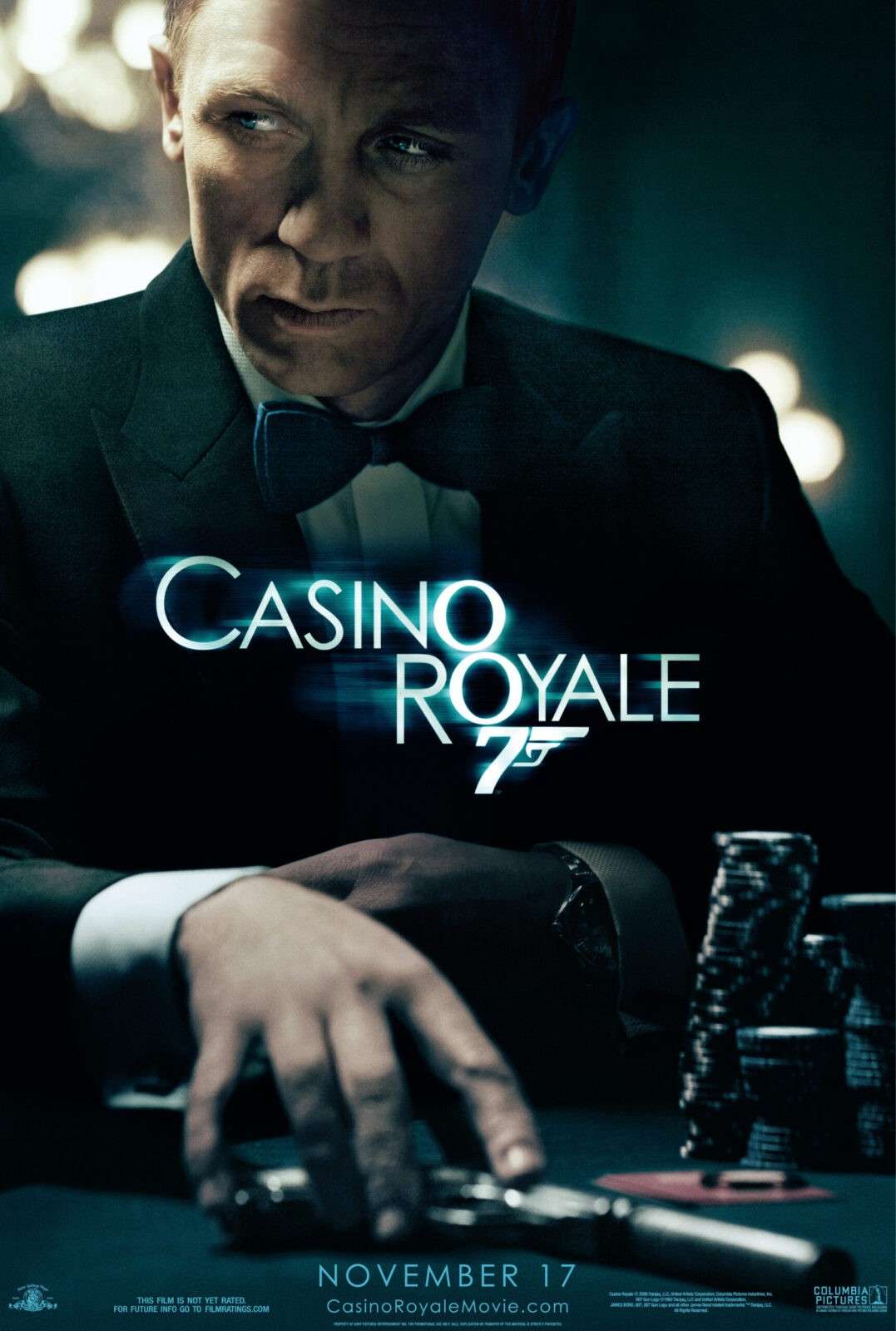 #6 in my Ranking of the James Bond Franchise.

I don’t think the Bond franchise needed a reboot after Licence to Kill with Goldeneye, but it definitely needed one after Die Another Day with Casino Royale. The franchise had devolved into silly setups with mish-mashed storytelling while contrasting horribly with the central take on the character. It needed to step back and re-evaluate how to tell Bond stories. The Bond franchise has almost always been a follower of fashions rather than a leader, so it followed the Batman Begins formula, providing audiences with a down to earth re-appraisal of the beginnings of the central character after an outlandish take that had lost complete sight of that character.

It pulls it off really well. 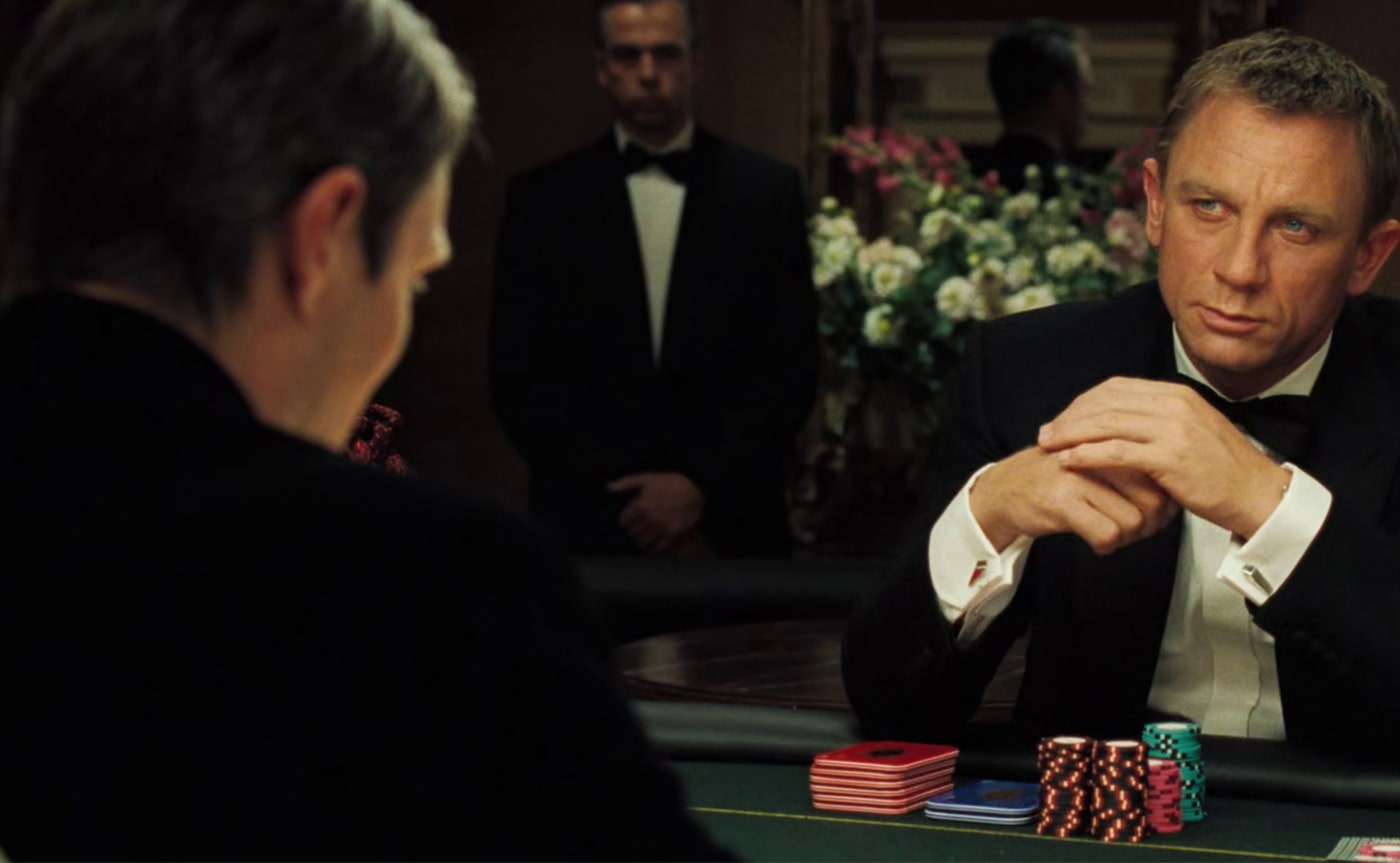 In my eyes, Bond really stopped being a character with Diamonds are Forever. Connery’s last outing and Moore’s entire run were built around Bond as an archetype through which to have an adventure rather than a character with motives. Dalton brought us closer, and Brosnan further from that ideal, but with Daniel Craig’s first Bond adventure, we have the first Bond film that treats 007 as a real person in more than 30 years. Using his first foray into the spy world as a 00 agent is a smart move, and using Ian Fleming’s first published story about the character helped as well.

The opening pre-credits sequence announces to the world that this is a very different take on Bond. The black and white photography (that doesn’t really look like it was filmed that way, but converted later) and the gritty hand to hand combat in a bathroom are a different universe from space lasers and invisible cars. With his 00 status firmly in hand, Bond sets out on his (now color) first mission to investigate a terrorist money operation, starting in Madagascar and a bomb maker. The action scene that follows is great, but it left me with a thought.

I sometimes talk about sequences that could be hard cut out of films without really noticing, and the part of the action scene in the construction site is one of those. It’d be easy to simply cut it out without noticing it from a story perspective, but I’d never recommend it. Why not? Well, it’s actually fun, and it also demonstrates this Bond’s approach to his job. The bomb maker he’s chasing is an expert in Parkour, jumping around and over things while flying through others almost balletically while Bond crashes through (once time literally through a wall), keeping up his momentum by making his own straight lines in contrast to the bomb maker’s more elegant paths. It’s a fun scene that adds little in terms of plot, highlights our central character’s approach to his job, and is exciting to boot. 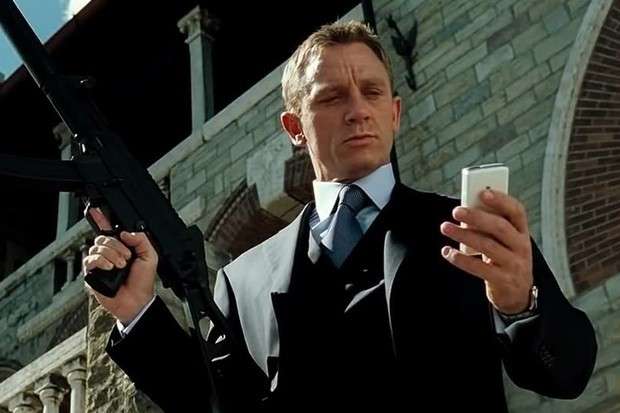 Anyway, the money operation is run by a man named Le Chiffre who has a dead, and occasionally bleeding, left eye. He bets all of his terrorist money on the shorting of the stock of an airline, planning on blowing up their new prototype airliner and sinking their stock, but Bond follows the trail from the bombmaker he takes care of in Madagascar to foil the plan (in another really well executed action scene at Miami’s airport), wiping out Le Chiffre’s holdings. In an effort to rebuild the fortune he lost (the money held by some of the world’s worst terrorists), he sets up a high stakes card game in Montenegro at the eponymous Casino Royale. Being the agency’s best poker player, M sends Bond to play in the game.

Getting to Montenegro, we get introduced to the other great triumph of this film, Vesper Lynd, the money and Bond’s love interest in the film. There have been several times in the franchise that they’ve tried to replicate the success of Bond’s relationship to the Countess Tracy in On Her Majesty’s Secret Service, from Anya Amasova in The Spy Who Loved Me to the inversion Elektra in The World is Not Enough, but none of them have succeeded for different reasons. Vesper is the first to do so, and it’s because the movie is actually taking its characters seriously. Bond feels like a real man, and Vesper feels like a real woman. They have chemistry. They bicker in playful ways. Their relationship feels natural, and the movie actually dedicates time to it. 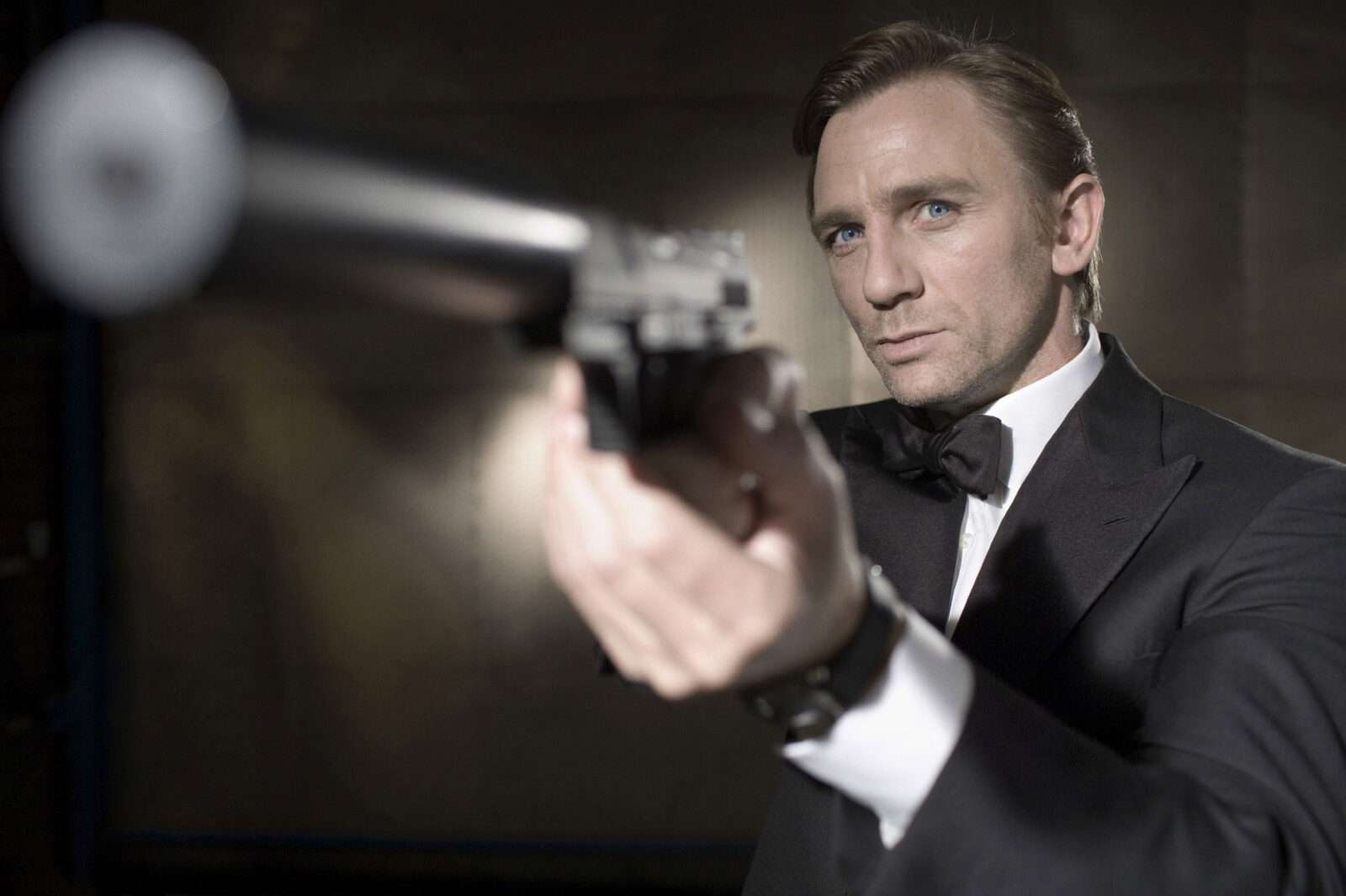 There’s a moment, about halfway through the adventure in Montenegro, where Bond kills some African terrorists in front of Lynd, and she’s completely shaken up by the sight. She’s an accountant, not a secret agent, and she’d never had to see anything like that. That the movie actually treats her seriously like that is a testament, but that Bond actually reaches out to her, sitting down next to her fully clothed in the shower just to hold her, is a testament to how good the work on the characters is in this movie. Bond’s self-imposed armor against attachment and women is coming down as he watches this frail, attractive woman undone by the world that he lives in.

I will say this, though, I hate that they used Texas Hold ‘Em as the card game. I understand why they did it. It’s much more popular and more people understand the rules than Baccarat, but Texas Hold ‘Em is far too American for a Euro-centric spy story about James Bond. The final hand where everyone has some great combination of cards is ridiculous and outside the realm of the grounded realism of the film. But what would a poker tournament in a movie be if the final hand was won by a low pair on a bluff, I guess. 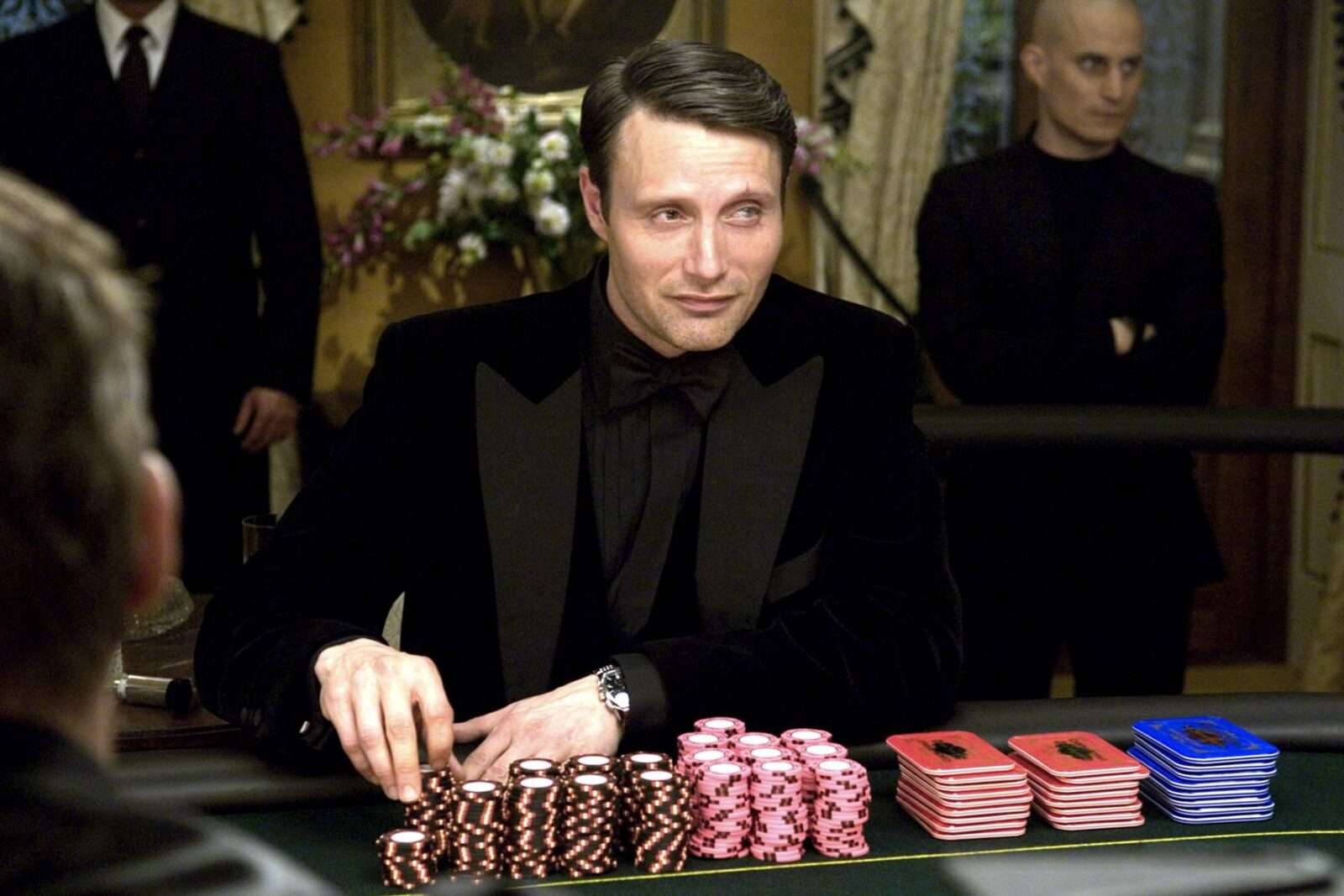 Anyway, Bond wins, Le Chiffre loses, and Bond gets captured. It’s the point in the film where Moore would have been placed in an easily escapable death trap. Instead, Bond gets tied to a chair and Le Chiffre pulverizes his testicles, only saved by the men that Le Chiffre answers to exacting their revenge on him. This is another moment to talk about Diamonds are Forever. I criticized that film because Bond got saved from a certain death situation, but the problem there was that it felt completely random. The world around Le Chiffre, the shadowy Mr. White, the constant threats of violence from his creditors, and the later revelations, make this escape where Bond does nothing feels much more interesting and satisfying. It’s not that Bond didn’t do anything to escape, it’s that the situation of his escape makes more sense and feels natural.

The movie then fakes out the audience with an unexpected ending where Bond and Vesper run off to Venice where they promise to leave their lives behind and find honest jobs just so long as they are together, but this adventure isn’t done. There are double crosses and foot chases and Vesper drowns, leaving Bond cold and angry in response. His defense is back up, and it will never come down. 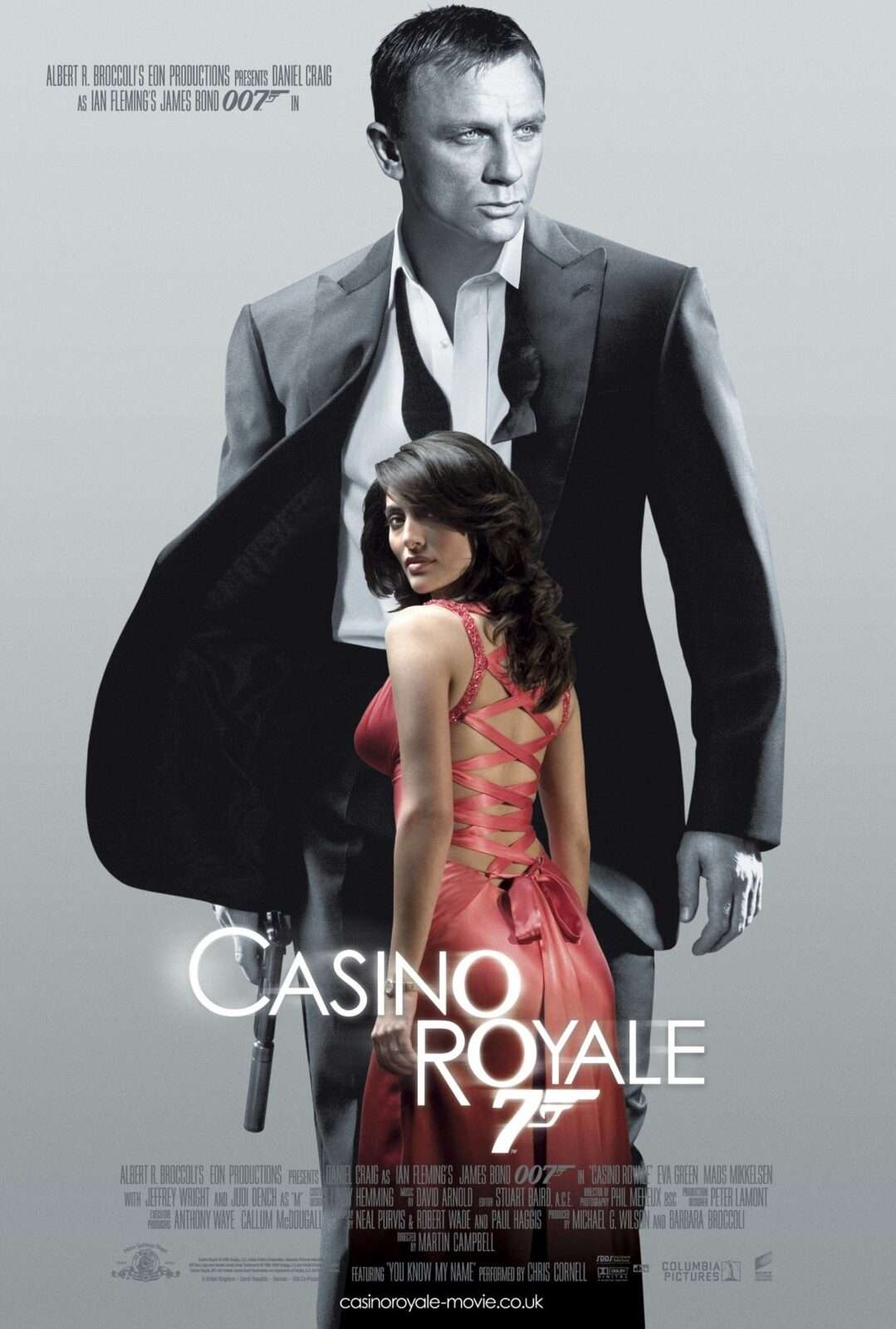 As the Batman Begins style re-evaluation of the creation of an iconic character, it’s smartly done. As a Bond adventure, it’s exciting. As a grounded spy tale, it’s fun. This is a very good Bond film, and exactly what the franchise needed.