With November’s No Time to Die (postponed due to the dreaded cornovirus), we’re reviewing the Bond films and ranking them from worst to best of the 24 official films in the lead up to the movie, (only those produced by long-term rights holders Eon Productions). This is easily the most uneven franchise or groupings of films that I’ve ranked. It’s kind of ridiculous that way. Anyway, these rankings will be from worst to best as we head towards “No Time to Die.” 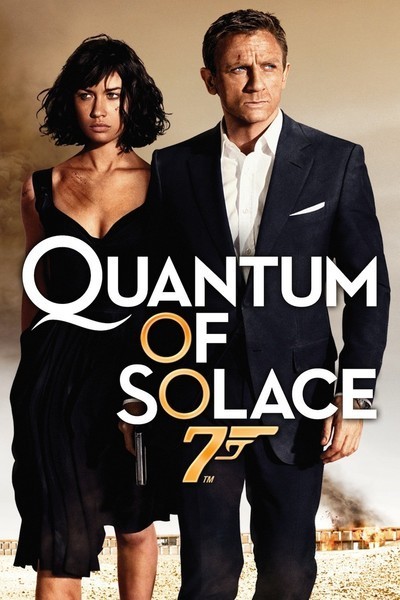 #16 in my Ranking of the James Bond Franchise

Apparently, the most interesting parts of this movie’s story were come up with on set and the least interesting parts were the actual script. Paul Haggis delivered the film’s final draft two hours before the writers’ strike began and the production didn’t wait for it to end. They went straight into production, but they wouldn’t have been making up stuff on the fly if they had been confident of the draft they had in hand. From what I’ve read, everything about Bond’s rage and emotional journey was stuff that Daniel Craig and director Marc Forster came up with while shooting, while the overwritten plot around a secretive criminal organization was in the Haggis draft.

A lot of grief goes to the movie’s embrace of Jason Bourne style action filmmaking, and I understand that. It’s a visual aesthetic that a lot of people simply don’t like, but I don’t have an inherent problem with it. I think Forster actually handles the format rather well, within the box of that type of filmmaking. The pieces are small and frantic, but they do add up to a rather cohesive whole that I can discern. Ironically, it’s clearer than the more traditionally filmed The World is Not Enough. It’s not at the quality of Paul Greengrass’s The Bourne Supremacy, but it’s still good enough.

The movie picks up moments after the end of Casino Royale with Bond speeding away with Mr. White in his trunk after having shot him in the leg at the end of the previous adventure. He takes his captive to M in Sienna, Italy, where Mr. White promptly escapes by declaring that they have people everywhere and a long-time aide to M turns on them instantly, killing all but Bond and M. Bond chases the double agent and kills him, but lets Mr. White escape.

Bond then sort of goes rogue, but not really, in investigating the organization that Mr. White referred to, taking him to Haiti where he finds Camille Montes and Dominic Greene. Camille is Dominic’s lover, and Dominic is the CEO of Greene Planet, a major corporation that does a lot of ecological and environmental work. It’s obvious that there’s more to him, of course, when he deals with a South American general in search of funding for a coup and Dominic is happy to provide it while also threatening Camille’s life.

The action scene that follows is confusing, though. Not in terms of literal action, but in terms of motive. I do not understand why Bond intervenes. I suppose he’s trying to save Camille from the clutches of the general, but after he gets her away, he just dumps her off to the first porter he sees with a comment about how she’s seasick. It’s weirdly callous and he’s placing her right back in danger. If it wasn’t for her safety, was it for the general’s safety since Camille was going to kill him? Why would Bond have any interest in that? Intervening in something tangential like that just ignites interest in his presence. It’s a weird and seemingly pointless action scene.

The action then moves to Austria where the secretive organization, now known as Quantum, meets at an opera. It’s weird. While a production of Tosca plays, they talk to each other in the audience through earpieces. Bond steals one, hears enough information and ruins the party, taking pictures of some obvious members who get up and leave. I love the idea of giant secretive organizations, but the effort to make their meetings interesting often ends up feeling odd instead of intriguing. Instead of just using basic communications technology in the privacy of their homes, they go out into the open and talk to each other during an opera? Sure, it looks good in the film, but it makes no sense.

We then follow Bond as he goes to Bolivia where Dominic has a big party announcing some big something or other in a fundraiser. Bond and Camille get clues to a remote hotel in the desert where the final confrontation takes place. There are many explosions and the good guys win.

I think part of my problem with the movie’s plot is that it tries very hard to hide what the bad guy’s plan actually is. We spend about three-quarters of the film thinking that it has to do with oil (even going so far as to kill the second Bond girl, Gemma Arterton, by filling her lungs with and covering her with oil in a visual replay of the golden girl in Goldfinger). However, the plot isn’t about oil, it’s about cornering the water of Bolivia. There’s an important point that comes very late in the film that Bolivia is in the middle of a water crisis. It’s shoved very late in the film and would have been good framing information to have early if the movie was more interested in telling a story than tricking the audience.

I am not a fan of this film’s plot or antagonist. It’s tricky instead of intriguing. The antagonist is dull and ends the film in an action beat that feels really out of place. However, there is some interesting stuff that Bond goes through. It begins the movie assuming he’s filled with rage towards Versper from her actions in Casino Royale and towards the people who turned her against him. He works through that process as he learns that he doesn’t need to kill everyone, maxing out his License to Kill, essentially in a mirror journey with Camille. She’s also driven by rage against the general and kills him, while Bond sees how it drives her and actually ends up trying to pull her back. This is enhanced by Bond’s interactions with Mathis, the MI6 agent he turned against in the previous film because of Le Chiffre’s admission that Mathis worked for him (which turned out to be a lie). Holding Mathis as he dies, Bond sees a path forward out of rage. It culminates with the movie’s final scene in Russia when Bond confronts Vesper’s supposedly dead Algerian boyfriend who’s actually a Quantum asset and he lets him live, turning him over to authorities instead of exacting revenge. It’s a surprisingly well-made journey for Bond, and I think it works reasonably well.

It’s just stuck in a movie that doesn’t deserve it.

The action is fine, the character work is good, but the plot around it is needlessly confusing and the antagonist is a joke. It’s a real mixed bag of a film that I want to like a whole lot more than I do. But, alas, I simply can’t get past my issues with it.