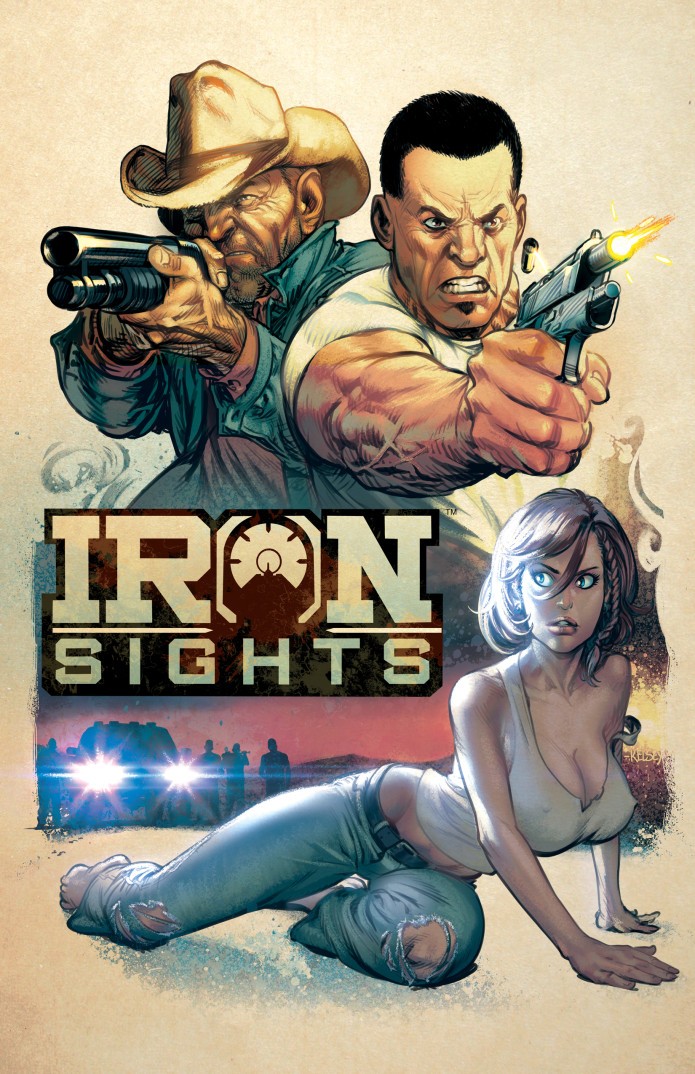 Let me preface this review by stating: The Good, The Bad and The Ugly is my favorite film. It is absolute perfection. Incredible actors, a tight story, and a soundtrack that became the very definition of modern western lore.

The beauty of the story in The Good, The Bad and The Ugly is that the three main characters all had a little bit of all of those things. The movie clearly lays out who gets labeled what, but the story subtly lets you know that things aren’t quite as black and white as the title would lead you to believe.

Iron Sights, written by Richard C. Meyer and illustrated by Ibai Canales is a modern day western in every sense of the word, and it embraces the same kind of subtle character ambiguity wholeheartedly. Everyone is a ‘bad guy’. That much is clear from the outset. Right off the bat, we are introduced to the leader of the Sapo cartel, Old Man Rodriguez and his inner circle. Rodriguez is very much one of the true ‘bad guys’. No ambiguity in this case whatsoever. There are problems in an area near the border that the Sapos control and Rodriguez wants it dealt with. 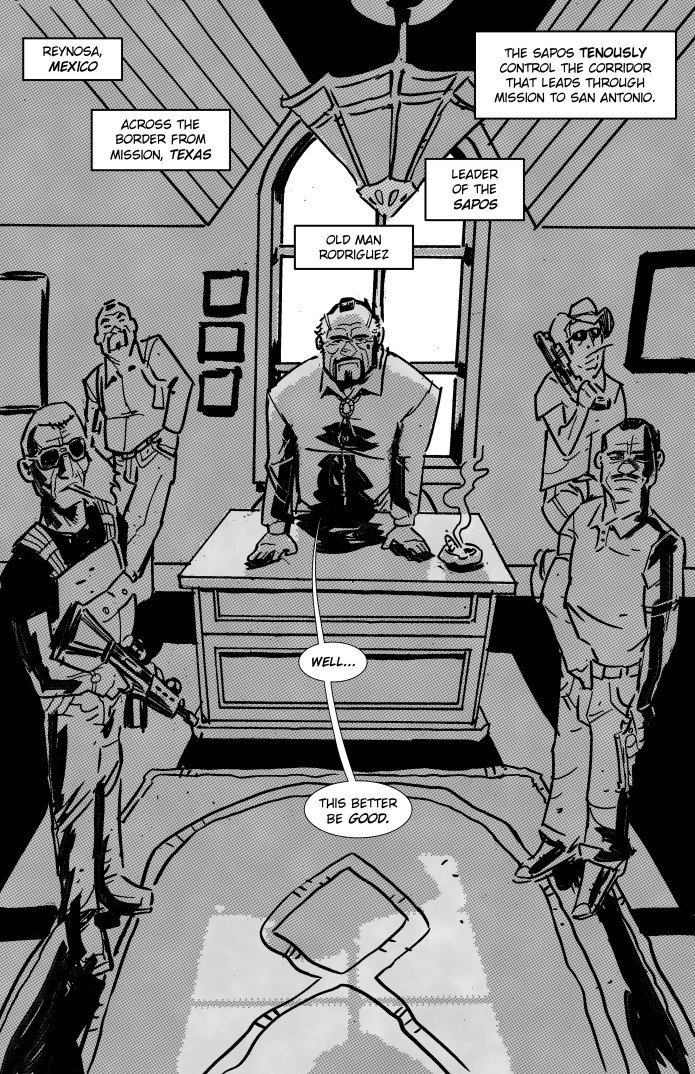 Okay. Let’s talk about stereotypes for a second. The thing is, for the most part, stereotypes are exaggerations rooted in bits of truth. Rodriguez is for sure a stereotypical old Mexican man. He despises what he perceives as weakness, and he calls it out via homophobic slurs. Calling someone a ‘faggot’ (maricon) is one of the worst insults and synonymous with weakness (male weakness specifically) in most Hispanic societies. I would say Mexico more than most. Is this book full of Mexican stereotypes? Yes. Are they accurate, particularly in the context of criminal cartel members? YES.

The scene shifts to the Texas side of the border where former Marine sniper Ramadi is having a bit of target practice with his work buddies. After a brief demonstration of his skill, the scene shifts again to an old man walking down a dusty road. We aren’t given a very long introduction, but we learn quite a bit about what kind of man he is pretty quickly. Meyer has a Tarantino-like approach to his characters that works very well for this kind of story. Show, don’t tell.

Ramadi wakes up from a nap in his truck and spots what appears to be a large group of cartel members gathered right over the border. A quick look through his sniper scope shows him a young girl facing what appears to be an execution. His instincts kick in and a few seconds later several cartel members are lying dead in the sand. Ramadi knows he just opened a very large, and very dangerous can of worms. I thought it was a nice touch how Meyer and Canales ground Ramadi. He’s no terminator or superhero. The killings leave Ramadi full of emotion and adrenaline. His breathing is heavy and he can’t help but laugh, despite knowing the danger he has put himself in.

We then meet Conway. Customs official and Ramadi’s current business partner. We get a little foreshadowing via Conway identifying some nearby cartel members before we’re reintroduced to the old man walking. His name is Woods, and he isn’t here to take anyone’s shit. Ramadi’s included.

The cartel is relentless in their pursuit of Ramadi. After all, there are only a handful of men living near the border that have the skill to make the shots that killed the Sapos, and they know it. Unfortunately, this puts Woods on their radar as well. So like it or not, they are in the same boat. It’s like a buddy comedy. Minus the buddy and comedy. This story is deadly serious, emphasis on the deadly.

From this point forward Iron Sights turns the dial to eleven. Bullets fly, heads explode, and with just a few exceptions, no one is spared from the carnage.

Through it all, we see Ramadi slowly embrace the situation he finds himself in. This is a war and despite its horrors, for Ramadi, it’s home. He’s a bad man with good intentions. He means well, but he is who he is and ultimately, he must make peace with himself if he means to walk away from this with his life. 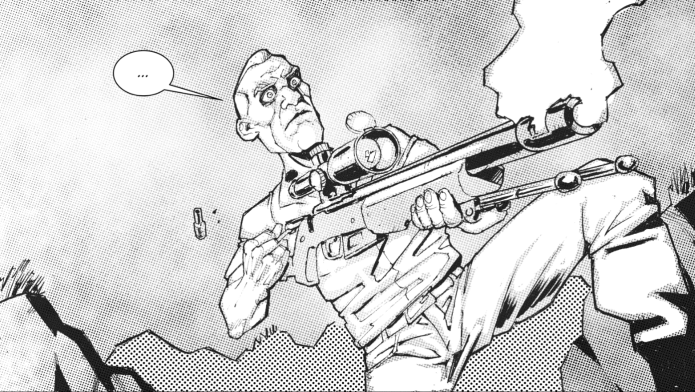 Meyers is mercifully short on exposition, preferring to let the action on the panels play the role of narrator. Fortunately, artist Ibai Canales is more than up to the task of making sure the unspoken is conveyed through body language and facial expressions. His art style is mostly reminiscent of early Rob Guillory. It’s in the close up facial expressions where he really shines here. The panels where Ramadi and Woods are conversing as they line up shots through a scope are particularly enjoyable. There are heavy emotions that have to be hidden beneath the calm required to shoot accurately from a distance, and Canales manages to peel back that curtain just far enough to show you what’s bubbling just under the surface. It’s through the art that we get to see the good, the bad and the ugly, moreso than the writing. 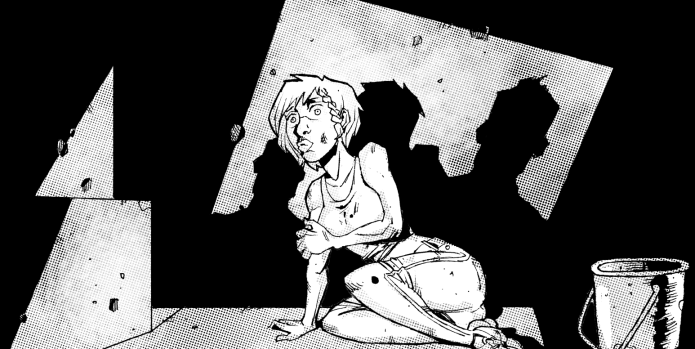 There are some problems here. At times there are events taking place that without context appear to make little sense. However, the few instances of this do little to harm the overall narrative.

This book does not hold your hand. It’s a rough and gritty walk through a very dark place. If you came here looking for heroes, you came to the wrong place. But if you ever wondered if a bad man needs to do something good once in a while just to see if he still can, you’ve come to the right place.

The end leaves the door open for further stories and I hope that we get to see more of this lovely little nasty hellhole. Yes, the story is heavy, but never so heavy that it stops being fun. I say, check it out.