TENET is a 2020 film, written and directed by Christopher Nolan, starring John David Washington and Elizabeth Debicki. A friend of mine urged me with heartfelt enthusiasm to watch this film, and bought me a copy to ensure that I did. I am grateful, for it was well worth the time, no pun intended. 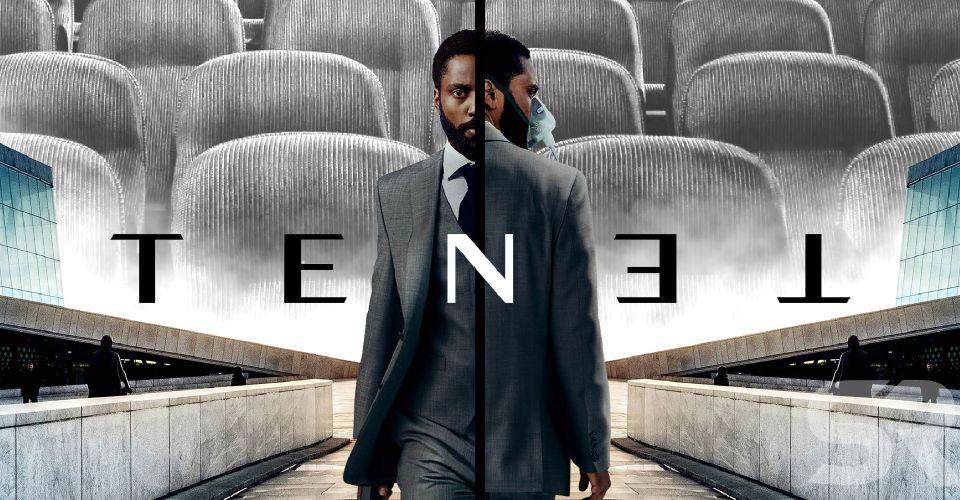 As is typical with Nolan films, TENET cannot be discussed without enormous and unforgiveable spoilers, and it is film worth not having spoiled, so I suggest only those who have seen it look beneath the fold for my remarks.

The film maker clearly meant for an audience not knowing what to expect to watch it, and, as a courtesy to him, if not for one’s own enjoyment, that is the proper way to see it.

Be warned that what follows is more an essay than a review, or rather, a series of essays, delving, perhaps unwisely, into the philosophy behind the film, and the theory and practice of storytelling in general.

It will be spaced over six parts, including this. 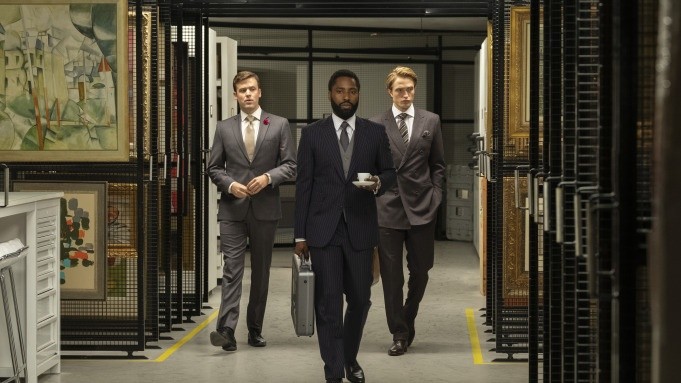 Even to say in what genre category this film occupies says too much: it is a time travel story, but knowing that walking in spoils a good many of the plot twists in the first act.

I would like to begin my review at the beginning, but I cannot, for this film is begins where it ends.

In other words, the meaning of the film changes, if the events are considered either forward or backward. In essence, the film is a palindrome, and so is named for a palindrome.

The film title is an in-joke for those who know of the Latin palindrome square:

A palindrome is read either backward or forward, whereas this square can also be read vertically descending or ascending, or even in alternating directions, boustrophedon style.

The translation is unclear, but a likely reading is “The sower preserves the work by turning the wheel” — which is a sentence mysterious enough and self-referential enough to serve as the motto for this film.

As a wink to the audience, the Russian mobster who is the film’s antagonist is named Sator, and his front company is named Rotas.  Arepo is the Spanish forgery artist whose false Goya painting figures into Sator’s wife’s backstory; and the first scene takes place at a Russian Opera.

The tale is introduced as a spy thriller. Our protagonist (whose code name of “Protagonist” is another self-referential wink at the audience) is betrayed, tortured, and commits suicide via cyanide tooth in the opening ten minutes of the film. Then things get weird. 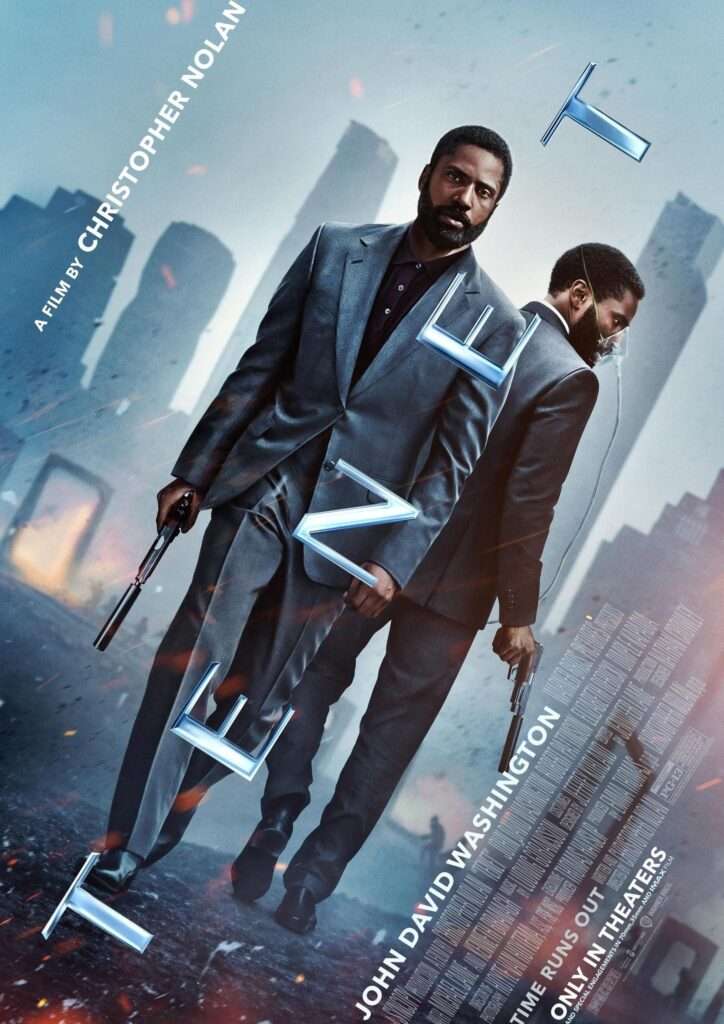 Before he dies, he sees another agent shooting a bullet backward through as hole in the glass, sucking it into the barrel, leaving suddenly whole glass behind.

The plot concerns, apparently, the Protagonist being hired (or drafted) into an secret agency, called Tenet, whose mission is to preserve the world from time travelers.

Someone in the future has, or, rather, will, discover how to invert entropy on objects, so that they run backward through time like a film in reverse.

A future generation are sending ‘extropic’ objects, such as bullets or bungie cables, backward through time by burying them in time capsules, or, rather, reverse time capsules. Their agent receiving the contraband in the current day is an arms dealer named Sator, who wishes to use the time traveler’s technology, and their inside information of events to come, destroy both himself and the world in a nuclear holocaust. The Protagonist uses Sator’s estranged wife, Kat, to get close to him, discover his plans, stop him. 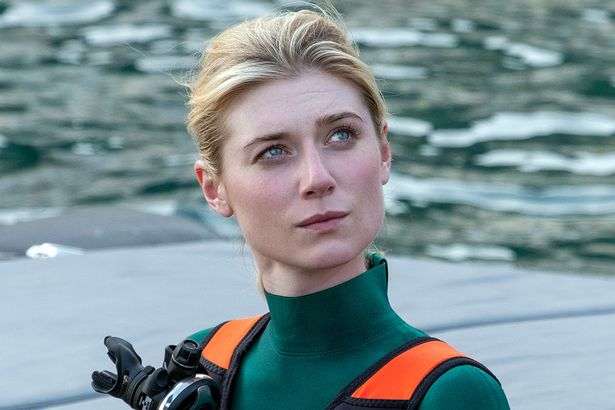 But for the first half of the film, Sator correctly anticipates Protagonist’s every move, and outsmarts him, but when Protagonist discovers the location of a ‘turnstile’ that is, the entropy-reversing machine, he finds himself ahead of Sator, and is able, not without sacrifice, to prevent Sator’s scheme from coming to fruition.

The motive of the future generations, of necessity, is unclear. Apparently, they are so angry at the current generation for our mismanagement of the world which they inherit from us, that they want us destroyed even at the cost of their own self-redaction from the timestream. Or perhaps they are possessed by a mystical belief that by reversing entropy on a worldwide scale, they will become our ancestors, whereupon we can be eliminated without harming themselves. Neither option bears close examination, and the film wisely does not dwell on the point.

As one might expect for a time travel film named after a palindrome, the ending is the beginning, and the beginning is the ending, as the twisting snakelike plot eats its own tail and gives birth to itself.

The whole thing is as ingeniously clever as a Celtic knot, and worth at least a second viewing, to see each scene from two viewpoints, before and after the viewer knows the future events. 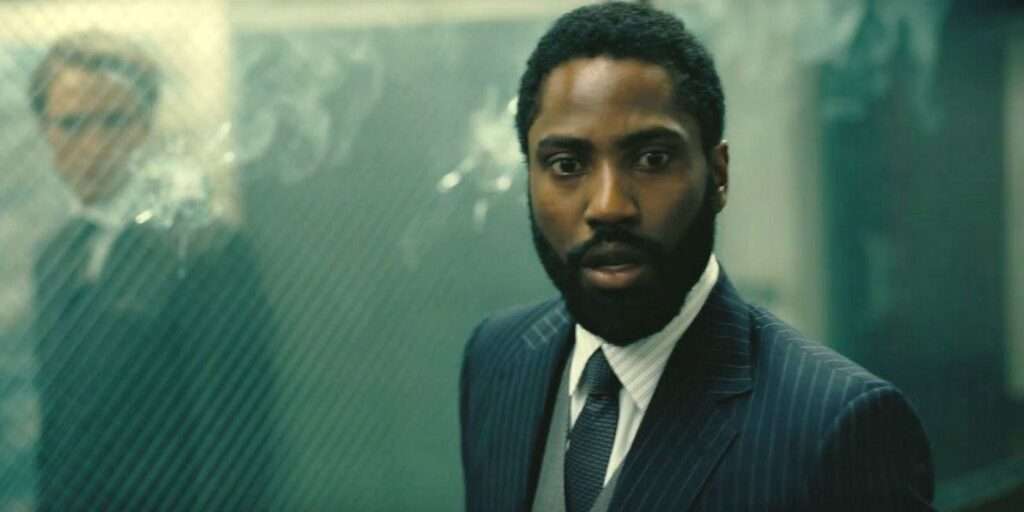 The thing I liked the best about this film is the handling of the time travel element, which is the element I liked least.

A digression within a digression is perhaps apt for discussing a Nolan film, but let me first mention the other elements of the storytelling in the film — the non-temporal elements, as it were.

There are five elements to all storytelling, and six to science fiction. The five are character, plot, setting, style and theme, otherwise known as who, what, where, how and why.

The science fiction has an additional element of worldbuilding, because such tales either take place in a world or time not our own, or have characters or props from other worlds or times intrude into ours.

In the case of TENET, the worldbuilding element is the time travel technology of anti-entropy or extropy, intruding into our time from the future. This is the element, while mentioned first, is to be discussed last.

Except that the setting need not be discussed. It is our world, except one filmed all in gray and sepia tones, where no one laughs and no one smiles.

Or perhaps the grim tone is an element of style. The filmmaker’s style is somber and cerebral.

Let me say that I rather admire Nolan’s rather cerebral approach, seen in more than one of his films, to telling stories in disjoined order, or with multiple levels of unreliable narration, as with MEMENTO, which is also a story told backward, or INCEPTION, a story told of a dream within a dream.

I enjoyed both those films much as a man might enjoy seeing a clever puzzle cleverly solved, but, on a sheer story telling level, I disliked them heartily. I would recommend them to others, for they are well crafted, but I would not see them twice.

Nolan is capable of greater things, as seen in his masterwork of science fiction INTERSTELLAR, where the characters display every nuance of the heroic, and are motivated by love that literally reaches from eternity into time.

But in other Nolan films, his characters were either disgusting or horrible: murderers, suicides, industrial spies, brainwashers, and so on. For example, the creepy dream-brainwasher in INCEPTION lost his psycho wife to psycho suicide. I could feel sorry for him because he lost his wife, but since he lost her due solely to the risks involved in his choice of criminal profession in creepy dream-brainwashing, I cannot feel sympathy.

I also have not much sympathy for characters trapped in stories whose theme is that reality is dream, or that reality what you see it to be, because no human character thrives beneath the regime of such inhuman themes.

I am happy to report that in TENET, Nolan’s characters avoid this pitfall. The Protagonist, as he must be in any spy thriller, is a spy, therefore a liar, and must be as remorseless as a soldier in war. He is a cold, hard man.

However, when he sets about using Kat, the estranged wife of the arms-dealer, to locate his prey, the protagonist here acts with human decency remarkably unusual in a spy thriller. He disobeys and rebukes his mission orders, at the risk of his own life, to save her when she is wounded, acting above and beyond the call of duty.

It was so rare, these days, to see heroism from the nominal heroes in films, that I was taken by surprise, and very pleasant surprise it was.

Even more rare for anything in the James Bond genre, the hero does not seduce and bed the heroine, even if he is suspected of doing so.

It was also rare, and a pleasure, to see a female main character who had strength of character. But she was not the “strong female character” of postmodern feminism, for her strength came from her femininity, and was not opposed to it. Her motive was primal and maternal: she wanted her son back.

And, again, I am happy to say that, despite grim tone and gray atmosphere of futility and fatalism that hangs over this whole work, Kat has a happy ending.

To continue to part 2 of this series, click here.